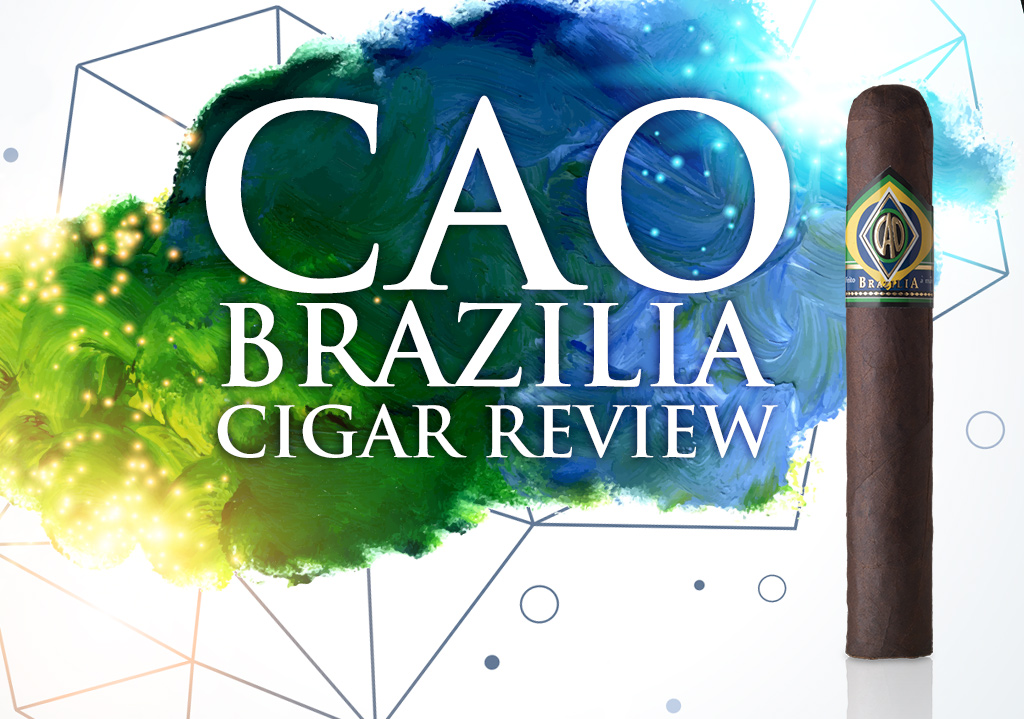 I’m so pumped to give the CAO Brazilia cigar review. This week’s round of reviews were drawn from a hat, and I think I won the draw. Of course maybe I just think that because this is one of my all-time favorite cigars. I mean just look at the thing – beautiful dark Arapiraca wrapper, covered in oil, aged a little bit. CAO Brazilia cigars are right in my wheelhouse, and I’ve smoked more than my fair share.

However, I feel it necessary to educate you fine consumers of cigars on the risks an oily wrapper may have. Because this cigar looks like it was dipped in a jug of 5W-30 motor oil, you can expect it to burn a little slower than usual. Sure, it offers amazing flavor and you don’t want to let the oils dry out because the result would be a bland, flaky, cracked piece of garbage. But because oils can build up more heavily in random spots on the cigar if it starts to dry out a bit, it can cause a slower burn in those areas that retain more oil while the rest burn at a consistent rate. This can obviously cause burn issues.

It’s well worth it to suffer through the burn issues with a few touch-ups here and there (if you are unlucky enough to experience one while smoking the CAO Brazilia because of the oils), but 99 times out of 100, it’s a non-existent problem or a very small one at the most. Only rarely with this oily sucker will you really get a burn issue that is worth noting.

Other than that, if you remember to burn and turn your cigar throughout your smoke and light it properly, you’re going to experience a smoke that is astronomically good. It’s just simply spectacular. Let me tell you what I mean as I roll into my CAO Brazilia cigar review.

This Brazilian wrapper is making me want to do the Samba because it’s so dark and oily with no discoloration or unruly veins in the wrapper leaf. It’s menacingly dark, which might make you think you’re in for a heavy hitter (which I think may scare some smokers away), if they are expecting a knockout smoke. More on that in my final thoughts.

The burn was somewhat wavy and went a little lopsided on me. More lopsided than I could ignore, but a quick touch up made it ride true the rest of the way through. I’d rather have a tasty cigar burn unevenly that gives me the flavors of the oil than wait for it to dry out, burn evenly, and skimp on flavor. So my warning in the intro held true that you may experience a rare uneven burn because of the oils.

The aroma is a true joy with a strong creaminess and cedar coming through hard and a slight spice to it. Not a peppery spice, but just enough of a light spice to sting the back of the nose the slightest bit to help wake you up. I’m my opinion, the balance between flavor and aroma is just right. It’s heavy on the flavor with ample smoke that does not overpower you with aroma. It’s a perfect complement to the taste of the cigar.

I hate when heavy cigars overpower you with aroma and I find it to be just poor blending. Aroma is just as important to the cigar as taste in my opinion. Why do you want the aroma to steal the show when there’s so much going on with the flavor? That’s like going to a football game and watching two meatheads that took too many steroid injections to the jugular beat each other’s last brain cell into oblivion rather than watch the game. Sure the fight is a bit of a bonus, but I want to see my Jets lose with as much dignity as possible without any major distractions. After all, I paid good money for the seats, right?

Once again, we come to the almighty taste test of my CAO Brazilia cigar review.

I love this cigar. Not just like, but love. Honestly, any cigar with an oily dark wrapper is right up my alley. Especially a Brazilian wrapped cigar such as this. Brazilian wrappers just give a more defined and pronounced taste, in my humble opinion. The taste is mainly supported by a nutty creaminess, hints of cocoa, coffee, and a sweet woody flavor. I found the hints of wood retreated a little towards the end with a creamy cocoa becoming more pronounced with some slight spice. Overall, the cigar does not change too much throughout, which is fine. This isn’t meant to be super complex. It’s meant to jam as much flavor as possible into your mouth as it possibly can, not promise you a life altering complexity.

I did what I always do on big and small ring gauge cigars though and over-smoked it towards the end of the cigar. Okay, I’m actually not sure if I over-smoked it since I got it down to about the quarter inch mark which is essentially a half inch past where you should really stop smoking unless you want to cook your tongue off. See what I mean? I love this cigar.

Although I did have a slight burn issue, it should not discourage you from trying out CAO Brazilia cigars. It’s been in CAO’s lineup forever and is a knockout every time.

Speaking of knockout, let’s just go over the strength and appearance real quick. It looks as menacing as the Egyptian God of the underworld, Anubis, but really this is just a little puppy dog to a full bodied smoker. There are other cigars that look just as bad that can back up their demonic appearance with a knockout punch to match (think 601 Green Label, Joya Antano, Camacho Triple Maduro, etc…). Not the CAO Brazilia Gol! though. It is still classified as a full bodied smoke, but in reality, it won’t knock you down or take you out back and rough you up a bit. If I were to recommend this cigar to anybody, I would say it’s the perfect cigar for a medium bodied smoker wanting to try out a solid full bodied stogie that won’t send them running for the hills.

However, if you are just a smoker who is looking for a new full bodied cigar to try out, I highly recommend the CAO Brazilia Gol!. It under-promises and over-delivers with a blue collar price point.  I hope you’ve enjoyed my CAO Brazilia cigar review! To learn more about CAO Brazilia cigars, check out CAO’s official website. Happy smoking!

I have never had burn issues with this cigar, in fact, it’s the best burning cigar I’ve ever had. I have dificulty connecting to the flavors, not that they’re bad at all; other than that it’s always a plesant expierence.

Great cigar. I’ve had a few of the Amazon big ringers and they’ve all been pretty decent

My favorite go to stick!!

Best review I’ve ever read, Jonathan. I have your name in my permanent search list.

Although I love some kicking pepper, this cigar is a delight! Tons of flavor, easy draw, it will be a staple in my humidor!

Reading Time: 9 minutes This relationship actually runs pretty deep…so I’m sharing 5 Things I learned that bond whiskey and cigars together: how cigarmaking dovetails with distilling, why a smoke is a natural fit with a pour of whiskey by its side, and what else these indulgences have in common.

How To Cut A Torpedo Cigar