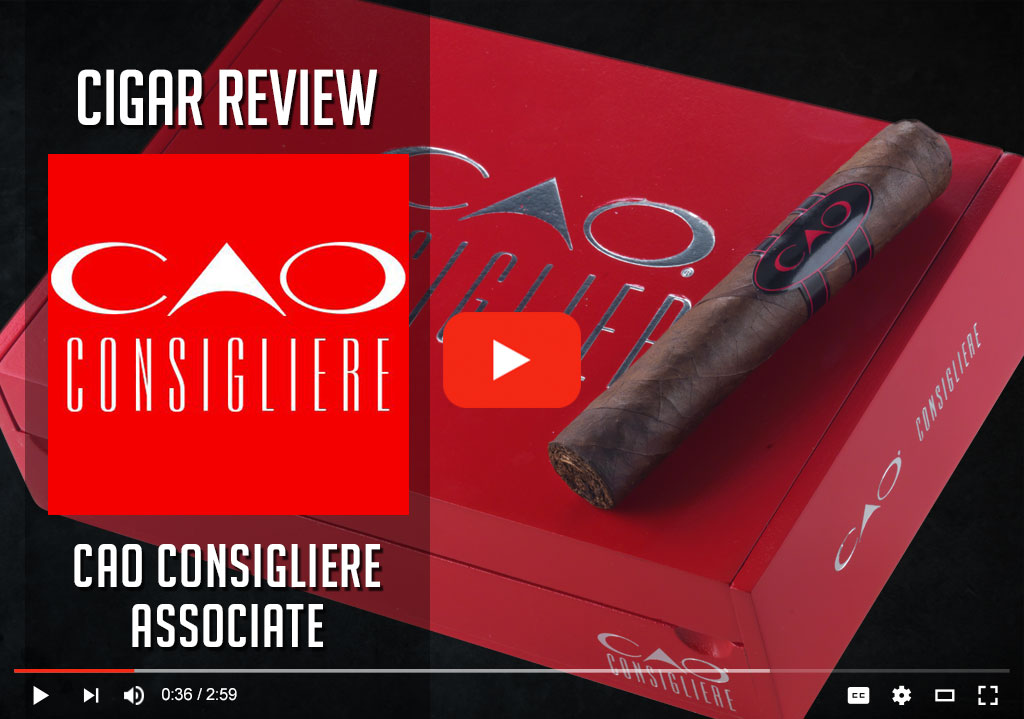 The CAO Consigliere Cigars Back Story

CAO Consigliere cigars are a super-premium cigar edition that offers the kind of flavor you could say is . . . hard to refuse. Made in Estelí, Nicaragua, the CAO Consigliere collection is a re-boot of a CAO selection introduced back in 2005, this time with a complex 5-nation recipe, including a Brazilian Mata Fina wrapper which was also used on the original blend. Medium-full in body, the line is offered in three sizes, “Associate” (5″x52), “Soldier” (6″x54) and “Boss” (7″x56), and presented in bright red boxes of 20 cigars. To see what the panel thought of the CAO Consigliere Associate, click on the video – and as always – your comments are welcome.

Construction and Overall Appearance: Well made with barely any soft spots. Wrapper is thick and toothy with some apparent veins, even in color, and sealed with a triple seam cap.

First few puffs: Earthy, with notes of cocoa and citrus.

The Associate started out with a nice mix of earth, sweet wood, a dash of cocoa, and citrus notes. The smoke is thick, creamy, and issues a hearty aroma. The flavors really opened up at about an inch or more down as more spice entered the fray.

Each puff was loaded with a well-balanced mix of flavors, while retrohaling revealed a sharp, spicy shot of cinnamon-like spice. The body was simmering away at full-bore in the final inches, yet the flavors remained on an even keel without getting too juicy or turning bitter. I’m also guessing the Nicaraguan leaf used was a high-priming ligero leaf that contributed greatly to the earthy-spicy component of this cigar. Although Mata Fina wrapper is known for its inherently sweet character, this is not a sweet cigar in the sugary sense.

Having had this very same cigar in August of last year (a sample from the IPCPR trade show), I was much more impressed the second time around. I would recommend the Associate to anyone who enjoys full-flavored, complex cigars with plenty of depth, and also suggest taking your time with this cigar as you smoke it to ensure you get every ounce of flavor. In short, another clear winner from the CAO team, and affordably-priced, to-boot. I know I’ll be returning to this one.

The Consigliere trades pepper and spice in for a thick smoke that’s smooth, subtle and naturally sweet. The oily Mata Fina wrapper helps make that happen. Click the pic for more.

Construction and Overall Appearance: The cap of the Consigliere is a little ragged, but it’s a thick n’ relatively juicy Brazilian Maduro Mata Fina leaf, after all – which means dark…oily…toothy…oh yeah.

Draw: Draw is on the slightly tight side. Don’t mistake that for being plugged, which this CAO is not – it just means that there is a pretty firm resistance when you’re taking a big, full drag.

Base flavors: Sweeten that coffee flavor a little, and that’s your baseline impression pretty much throughout the entire cigar. CAO Consigliere is hearty right out of the gate, with a subtle earth-and-pepper combo that come and go – yet don’t overpower when they appear. It actually tastes a little peaty from time to time. The flavors are very…warm, if that’s a way to describe them.

Retrohale: It’s almost spice-free, and it really opens up some more of those nice, warm flavors. The retrohale tingles, more than it burns.

Aroma: Good room note to this cigar, with almost an “aged” aroma.

Burn / Ash Quality: I’d say the burn line on this cigar is decent – no touch ups, but with a slight wave to it. The ash was solid white, and hung on nice.

Consistency: That coffee undertone sticks with you from start to finish, and from cigar to cigar – so I think that qualifies as pretty consistent.

The recipe was made famous in limited edition form over 10 years ago, but has returned as CAO Consigliere. Worth the wait, I’d say – as we have a Colombian/Dominican/Nicaraguan blend that starts medium, and ramps up to medium/full by the time you put it down. The Associate (robusto) size offers up some nice, subtle complexities, so it’s time well spent if you slow down and savor them. Just be warned – if your experience is like mine, everybody around you that smokes this cigar suddenly turns into a capo from Jersey (watch the video, you’ll see what I mean).

The Consigliere is decently packed, and many of the flavors I described from the cold draw up above in the tasting notes really hang on for a while after you light it; the finish is short to medium, and cranks out big rips of sweet smoke.

But the word of the day that comes out of this Consigliere cigar review is “price-conscious.” Seriously – it turns out to be a sub-$5 smoke when you buy it by the box…that matters, as the low cost of admission makes this cigar a solid value.

If you like Brazilian Maduro, that alone should put this CAO Consigliere on your must-smoke list – but because it’s a very straightforward smoke with such tasty aged flavors, that was all the extra convincing I needed to know that it deserved a good nubbing.

Construction and Overall Appearance: Very uniform, dark brown, Maduro wrapping. The burn was perfect, a snow-white ash that held tight to an even burn line. No flagging or touchups needed what-so-ever.

Draw: Very easy- just shy of too easy. You didn’t need to pull hard to get tons of white-smoke.

Toasting & Light: Bursting with flavor. A distinct earthiness matched by a very sweet profile. Notes of cocoa, coffee, and a little cedar and pepper.

Base flavors: Sweet, cocoa/coffee, and earthiness.

Aroma: Nothing aromatic of note.

Notes of charred wood and cocoa on the pre-light. Bursting with immense flavor from the first draw, not overpowering in the slightest. The Brazilian Mata Fina wrapper gives a distinct earthiness while coffee and cocoa take the front stage. Transitions to a stronger, slightly peppery finish while maintaining a sweetness throughout the whole smoke. Perfect burn and construction.

The CAO Consigliere has called for a sit down. Yes, mafia puns are aplenty with this mob-themed Consigliere line, a new name on a formerly famous blend. We smoked the Associate, a 5x 52 Robusto, which came decked out in a Brazilian Mata Fina wrapper, Honduran Binder, and Colombian, Nicaraguan, Dominican filler. The wrapper was a primed and neat looking Maduro and a red and black “CAO” band, slightly reminiscent of its predecessor.

On the pre-light, the main notes I took were that of charred wood, cocoa (think baking cocoa), and a slight earthiness at the foot. Right on the first draw I was hit by a truckload of flavor – more like a Waste Management truck – but not overpowering in the slightest. A distinct earthiness took the front seat along with a dark sweetness and rich tobacco. Still, notes of cocoa lingered as well as espresso.

As the smoke progressed, notes of pepper made themselves known with a slight tingling of the taste buds. The retro-hale was an ‘eye-opener’ as I would call it. Very strong, but it opened a whole new dimension of flavors to my palate including cinnamon and the charred wood scent I originally detected.

In the final third, the flavor transitioned to a more full-bodied smoke with some fruity tanginess from the Mata Fina wrapper. The burn was almost perfect, a snow-white ash that clung tightly to a burn line that was straighter than a switchblade’s edge. The construction was so well done that I had to think, was this a union job?  Pair this Mafioso with ma’s spaghetti and gravy and a glass of red.

Hey yo, gabbagool. . .yeah, I’m talkin’ to you. I got a cigar right here that’s gonna whack yer freakin’ taste buds with a whole lotta flavor. While CAO makes so many great cigars, the Consigliere Associate is a full-flavored addition to an already stacked line up. My associates and I smoked these hand rolled gems down to the nub, so, lemme tell you what you need to know… capisce?

Let me just say that this medium to full bodied stick creates a very complex situation. Right off the bat I got hit with nice notes of cinnamon, and I swear after about an inch I could almost taste something reminiscent of sweet plums. As the ash grew longer I was getting a pleasant nuttiness and then the wonderful flavor of espresso began to shine through. Oofah! This is a thing of beauty.

The construction is excellent, making for a great draw and a firm ash that grew to about an inch and a half until I tapped it into my ashtray. Again, I smoked this down to the fingernail and wished it wouldn’t go away, but when that soldier was put to rest, I was ready for a second helping of macaroni and extra gravy. Yeah, I’m from north Jersey – Sopranos country – and we say gravy. What, you got a problem with dat?

Now, the definition of a Consigliere is one who is an advisor, and just let me say that I highly advise you to give this outstanding smoke a try. I’m telling you that I could smoke this Associate every damned night after dinner, and at a really nice price, I’m gonna make this paisan a part of my regular rotation. Ciao, baby.