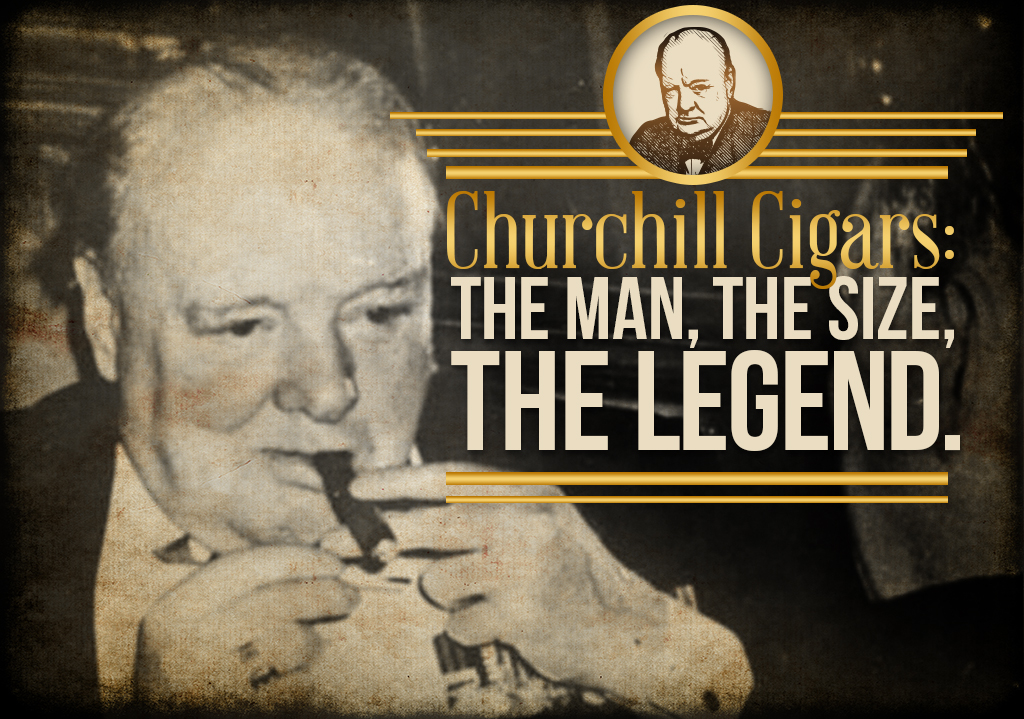 Yes – the answer is yes, Churchill cigars are indeed named after the man, himself. Winston Churchill was the Prime Minister of England, among a whole lot of other things, and the voice, the heart and soul that kept Great Britain together during World War II. Early on in his own military career he spent time in Cuba, and that is where he fell hopelessly in love with Havana-made cigars.

Sir Winston had an overbearingly strong personality and his insane passion for hand rolled premiums was thrust upon everyone he came in contact with. The man would light up his stick in the homes of dignitaries, kings and queens and didn’t give a rat’s ass where his ashes would land.

To say that old Winnie was a zealot about his stogies is one hell of an understatement. Rarely seen without a mammoth club protruding from his jaw, it was estimated that the prime minister consumed more than three thousand cigars per year! That’s a quarter of a million over the span of his lifetime (a life that he enjoyed for ninety years, thank you). The guy burnt so many holes in his silk pajamas that his wife actually made him a cigar bib to wear in bed. He even had the Royal Air Force create an oxygen mask that would accommodate his addiction during high-altitude flights. After the Nazi blitz on London in 1941, enemy bombs all but blew the famed Dunhill cigar shop to pieces. At two in the morning, Alfred Dunhill himself telephoned Sir Winston, informing him, “Your cigars are safe, sir.” (Talk about your preferred-client status!) His favorite size was seven by forty-eight, which the Romeo y Julieta factory in Havana aptly named the “Churchill” in his honor.

So, today we honor this great man with a list of eight Churchill cigars that in our opinion are seriously worth a try. They range in body from medium to full with a variety of blends and wrapper tobaccos. Check it out and share with us in the comments below, your thoughts and what YOU like to smoke in this size.

Unlike its fair-haired cousin, the Monte Classic, this golden child packs a lot more oomph on the palate with Nicaraguan and Brazilian Mata Fina filler on the inside and one heck of a gorgeous Ecuadorian Connecticut wrapper leaf on the outside. It gives off a nice woody flavor and aroma with a naturally sweet, nuttiness on the palate. Offered in 5 sizes, these Churchill cigars pair amazing with a good cup of coffee. This newcomer is SO worth a try if you like a nice medium bodied, toasty smoke.

This just might be one of the most consistent cigars that has ever graced the RYJ lineup. As far back as I can remember, the flavor profile and quality has remained the same as this wonderfully toasty, medium bodied stick just tastes and smells so damned good. Year in and year out that Ecuadorian Connecticut wrapper always looks the same as it surrounds some nicely aged tobaccos from Nicaragua and the Dominican Republic.

This is a Rocky on the lighter side, falling between the mild to medium bodied profile and if you look at the ratings, smokers give it some pretty high marks. This outstanding smoke offers a wonderfully-balanced blend of Nicaraguan and Dominican tobaccos – aged a full 7 years with a golden Connecticut shade grown vintage 1999 wrapper leaf. And to top it all off, the cigars are aged an additional 120 days after rolling.

This La Aurora is truly a full flavored treat and needs to be savored as the complexity reveals itself all the way through. An interesting blend of Nicaraguan and Dominican in the filler is joined by a spicy Peruvian ligero that gives it some real zip as the Ecuadorian sun grown Sumatra wrapper balances it all together. It is incredibly well made as the draw is flawless as it sports a firm and solid ash. Just a terrific smoke to enjoy after a nice hearty dinner.

Renowned cigar maker, Erik Espinosa’s devilish side came out to play when he blended this full-bodied banger. With unabashedly bold Nicaraguan filler and a dark and oil covered oscuro Habano wrapper leaf, it is without question the heavy weight contender of the 601 line of cigars. I smoked this after a hearty grilled steak dinner with sautéed onions, fried taters and blue cheese covered wedge salad and the Steel’s big flavor cut right through to my taste buds. Freakin’ yum.

This is one heck of a deep, dark, rich, full-bodied cigar where all the tobaccos are sourced from different farms across Nicaragua, including its oily, chocolate-colored Habano maduro wrapper. Oliva is renowned for cultivating some of the world’s finest leaf and this stick has been aged for five years giving it a hearty complexity and a natural born sweetness. And while it’s deliciously full flavored, it’s also smooth and never too strong or overpowering.

This is one of those boutique brands where it really is about time you gave it a try – and if you check out the high ratings on the Famous site, you’ll see that I’m not the only one who loves this cigar. Medium to full-bodied, they utilize a complex blend of leaf from several tobacco producing nations like Nicaragua, Columbia, Mexico, Costa Rica and Brazil, the latter being a dark and oily Mata Fina wrapper. Very smooth, super tasty and it’s about time you smoked ‘em!

This oh-so tasty medium to full-bodied stick is a real sleeper if you ask me. It’s very well made using some choice leaf from Nicaragua and the Dominican Republic with a wickedly flavorful Ecuadorian Habano wrapper. You’ll find a few interesting notes in the flavor profile like a cedary wood, cocoa, and even a hint of black cherry on the finish. It’s another Churchill-sized smoke that gets great ratings from cigar enthusiasts across the board.

So there you have it: eight premium, hand-rolled Churchill cigars – smokes that we know would have made Sir Winston proud. Which ones have you tried, and what are some of your favorite Churchills? Share with us in the comments below!

Phillips & King Cuban Rejects in the Churchill maduro , They taste good and they are affordable,

Everyone of these are terrific cigars!! Can’t say enough about them!

Dunhill just doesn’t seem the same anymore. Don’t know when they changed. My favorite was a Dunhill Toro. Enjoyed them for years. When I tried them again here recently, just want the same.