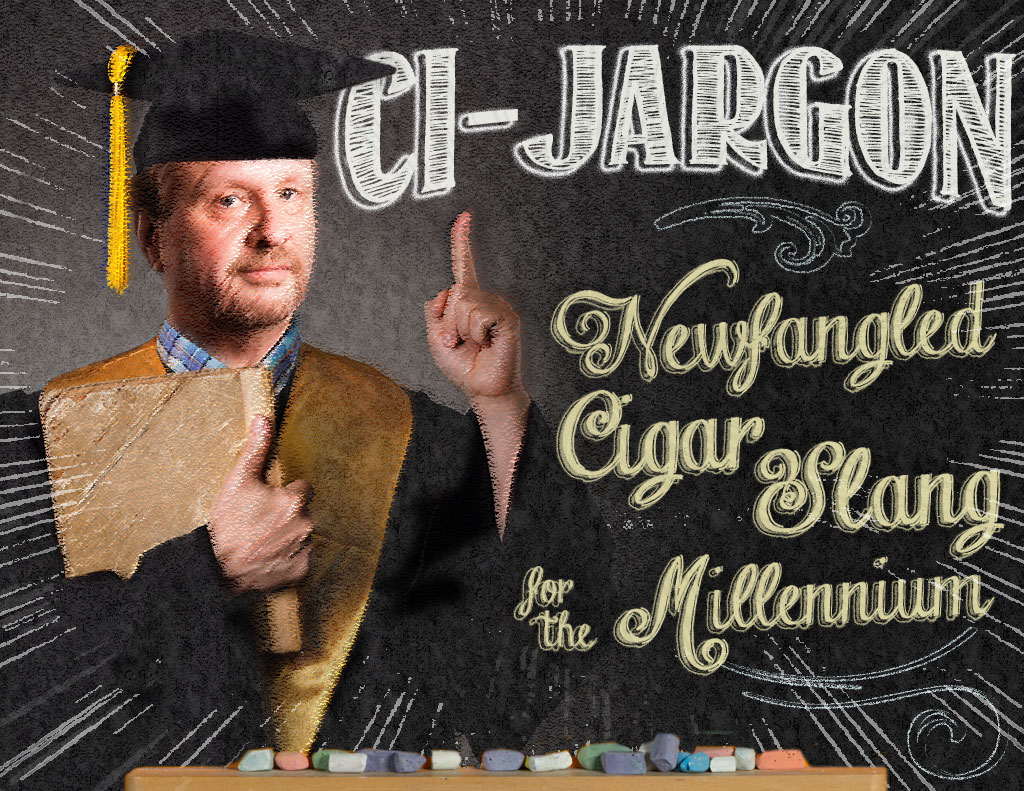 Ci-Jargon: Cigar Slang You Can Use

Every type of subculture out there has its own terminology, nomenclature and colloquial expressions that define things within that lifestyle, and the cigar world certainly has a few of their own. After giving it a little thought, I came up with a dozen slang terms that we lovers of the smoldering ash can generally identify with. But then I thought, “jeez, only a dozen?” You’d think that a genre as popular as the cigar universe would have a bit more of its own specialized lingo to rely upon within its leafy vernacular. (Man, somebody broke out the thesaurus today.)

So, please find below a list of perhaps the top dozen slang terms we cigar smokers like to bandy about… then, find below that, 22 brand-spankin-new uses of cigar related jargon, or as I would like to refer to it as “Ci-jargon”.

Stick – referring to a cigar… Dog Rocket – Referring to a really foul cigar… Herf – a gathering of cigar smokers large or small… Coolerdor – A homemade humidor created from a customized Igloo-type cooler… ISOM – A term used in forums referring to Cuba, as the “Island South of Miami”… Nubbing – Smoking your cigar down to the fingernails… Flavor Bomb – A cigar loaded with big tobacco flavor… Nic Bomb – A strong cigar that’ll knock you on your ash… BOTL / SOTL – Brother Of The Leaf or Sister Of The Leaf… Moocher – A slug who’s always bumming cigars off friends… Yard Gar – a cheaper smoke, often bundled and worthy of smoking while doing yard work… Smoke Nazi – an anti-smoking zealot (see my article “Say Hello to My Smoke Nazi Neighbor” for some frightening reference).

So, there you have it, Cigartophiles (oooo, that’s a good one), my official list of new cigar slang that can be used as you wish on Facebook, the forums, and a local herf near you. Lemme know in the comments below which ones you plan on using, or, you can even share a few of your own with us!

Reading Time: 4 minutes Have you developed a taste for infused and flavored cigars? We’ve picked five new cigars that bring a little extra flavor to the table – and if it’s a coffee fix you’re after, we have details on a bunch of must-try smokes. See our list now…