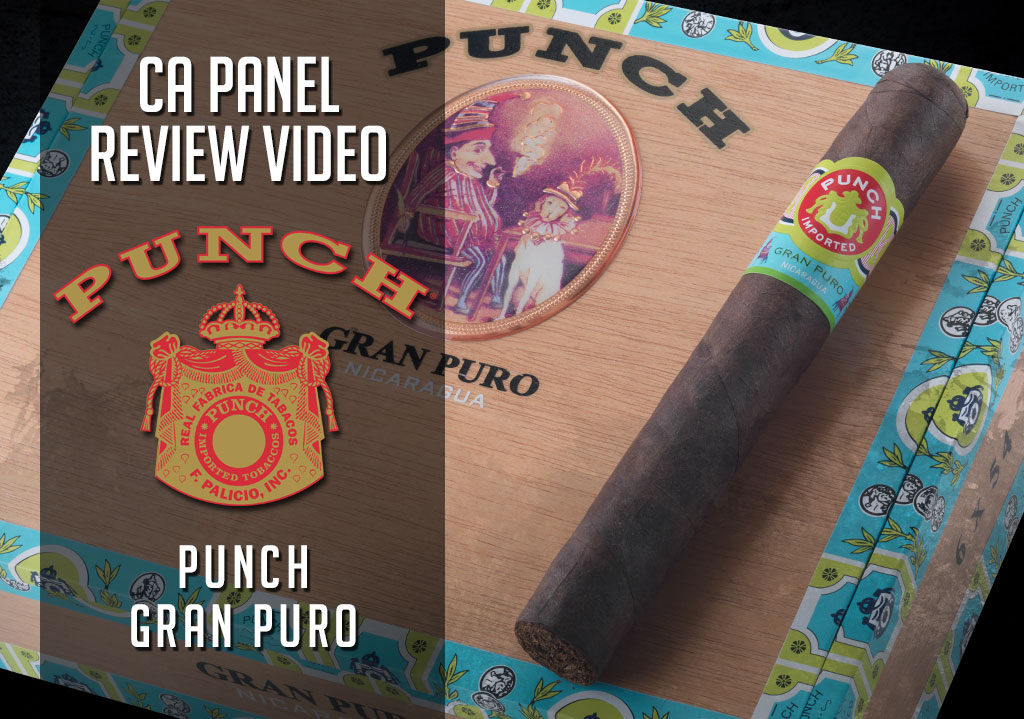 Handcrafted at General Cigar’s HATSA factory in Danlí, Honduras, Punch Gran Puro Nicaragua is handcrafted with a muscular blend of high-priming Nicaraguan filler and binder leaves surrounded by a hearty Connecticut Broadleaf maduro wrapper. That doesn’t make it a true puro, but no need to get snarky about it.

According to General Cigar’s Director of Marketing Strategy, Ed McKenna: “For the extension of the Gran Puro line, our artisans built a blend that balances Nicaraguan tobaccos with a Maduro wrapper to deliver a layered, dimensional flavor not traditionally found in Nicaraguan-based cigars.”

The cigars arrived at stores in February featuring a bright new blue & green pastel color scheme, and are available in four sizes that come in 20-count boxes.

To see what the panel thought of the 4 7/8 x 48 Robusto, click on the video – and as always – your comments are welcome.

Construction and Overall Appearance: Well made with a triple seam cap. Wrapper is even in color, no soft spots with visible seams and a few unobtrusive veins.

After an eye-opening blast of earth and peppery spice, sweet tobacco notes quickly entered the mix, pushing the peppery element out of the way like a nightclub bouncer dealing with someone trying to jump the line. The first half-inch also revealed an impressively firm and almost entirely white ash. The sweetness took center stage at this point for a mostly sweet-spicy and semi-peppery smoke with the odd “fruity” note in the mix.

This was also one of those cigars where the smoke got up into my olfactories with each puff. What I was getting was a combination of sweetness from the leaf with a peppery shot of smoke, like they were working together to create the experience. (Kind ‘a neat, too.)

The second half turned the corner to a mix of peppery spice with some charry cedar notes, but entering the last act, the pepper hit my palate like a howlin’ wind and knocked it out of my comfort zone. To be fair, I was impressed with the sweetness that came off the wrapper throughout the entire smoke. Moreover, I think the smaller dimensions of this cigar also had something to do with its fullness and strength. I’d like to smoke another in one of the bigger sizes for comparison.

I don’t usually dissent from the other three judges here, but even though I enjoyed the cigar I smoked during the video more than my baseline sample, it just wasn’t my kind of cigar. That said, I know a lot of cigar smokers will absolutely crave the Punch Gran Puro Nicaragua; that is, if you enjoy smoking really hearty, peppery Nicaraguan blends, this cigar, in this size, should be right up your alley – especially after dinner.

Construction and Overall Appearance: A dark, beautiful Broadleaf finish on this cigar, not overly oily but definitely thick and toothy. Well made, well packed and sports a generous-sized cap.

Draw: Draw on my baseline sample was pretty tight; the second was great.

Toasting & Light: It takes a little while to get this one started, since it’s a Broadleaf wrapper – and probably full of ligero.

Base flavors: Pepper, sweet dried fruit, somewhat leathery as I smoked more of it – pretty bitey.

Retrohale: Spicy – but surprisingly, not harsh and didn’t burn my sinuses out. It was a nice sensation, I just can’t quite put my finger on it to describe it.

Aroma: The aroma on this Punch had a subtle floral note, but it’s the hints of tea and natural raw tobacco smell that really stood out.

Burn / Ash Quality: Both of the Punch Gran Puro Nicaragua samples smoked with a mostly white ash, pretty compact too. The burn line was pretty straight throughout; no touch ups necessary.

One thing I learned during the review of this Punch Gran Puro Nicaragua…time is on your side. The fact that it’s a slow burner works to your advantage, as you could easily over-smoke this smaller size and end up needing to read our pointers on cigar nausea.

It’s medium-full at the very least, and if you like that fierce Nicaraguan bite, you could end up nubbing this thing.

That being said, this version of Gran Puro is way out in left field if Punch is one of your mainstay cigar brands. I don’t say that as a bad thing, I say that as a totally unexpected thing – leave it to a heritage Honduran brand to cook up a classic-style Nicaraguan power smoke. Who would have thought?

Construction and Overall Appearance: Wrapper has a toothy, dark chocolate look. Nice amount of oils. Slight opening/cut in the middle of the cigar but not soft spots. Large cap.

Toasting & Light: Lit up very easily. Initial flavors are sweet and grassy, subtle leather that gets stronger after 2 or 3 puffs.

Burn / Ash Quality: A slight flag, but nothing noteworthy. Ash is a pure snow-white, very sturdy. This is exactly opposite to the dark grey ash I had on the baseline sample I smoked a day earlier.

Consistency: Small differences between samples – subtleties in the amount of pepper and burn quality.

In a manner of speaking, I grew up on Punch cigars: my WWII vet grandfather smoked them his whole life and passed the tradition along to me. I’ve always been a fan of the strong Honduran tobacco and consistency in their cigars and even enjoyed their Nicaraguan ventures like the Punch Upper Cut, which had some beautiful Ometepe leaf.

This is not your typical Punch cigar; it’s fruity, sweet, and peppery all at once. The two samples I smoked were very different cigars though. While the construction of my first sample seemed flawless, the burn produced a dark grey ash, while the second had a noticeable soft spot, and it had an almost pure white ash. The pre-light was where things got interesting: Earl Grey tea, chocolate, and an earthy-grassy scent.

Upon lighting, this Gran Puro started at medium-full but very quickly proved a full body. My initial tastes were of herbal tea, a light earthiness, and a subtle note of leather. After a few puffs I found myself surprised at how fruity this cigar is. From the first third to the last, a sweet spice lingered that left a tingling on my throat, tongue, and lips. It produced a good amount of super thick, creamy smoke that came through a perfect draw and down to the last third.  This fruitiness which started on a dried fruit and raisin note, would change at the last third to a dark cherry vibe. I went in for a retrohale around the beginning of the second third, pulling very woody and cedar notes. On the second sample, I experienced a much more peppery retrohale but not overpowering.

Around the final third I noticed some definite changes – you remember that full-bodied spice? It picks up, a whole hell of a lot. Quite a bit more cedar and wood comes into profile. I must admit, the construction on both was fantastic. Both went straight to the nub without going to bitter. However, on my first sample I really had to pace my smoke; it kept bordering on almost too bitter.

The Final Roundup: Not your Grandpa’s Punch, or mine for that matter. A great after dinner smoke. A splendid amount of pepper and fruitiness to cut through a dinner, especially something like barbeque. If you enjoy Punch and want something different by them – give it a try; if Punch isn’t one of your usual smokes, this may be the stick that turns you on to them.

All four Advisors found some distinct flavors that leaned towards sweet, with a floral aroma. Rustic – but that Broadleaf looks amazing. Click to learn more.

There are certain cigars that I consider to be great, full-bodied after-dinner smokes – I’m talking about complex sticks filled with deep pronounced flavors. A few faves that come to mind are the Liga Privada #9, La Gloria Cubana Serie RF and the Padron 1926. After a nice meal, these are the type of cigars that let you sit back and unwind while you enjoy the hell out of the unique and changing flavor profiles.

Well, it’s time to add another fine premium aged gem to the list by the name of Punch Gran Puro Nicaragua. This is a dark and oily, full bodied and full flavored treat, and when I say treat, I mean that. This cigar has what I described in the video as “intense, complex” flavors and it was made to burn and smoke slowly because of its body as well as its thick, Connecticut Broadleaf Maduro outer wrapper.

We who review cigars tend to throw terms around like “flavor-bomb” a lot, but with this Punch, I just can’t help using that accurate description. I had the pleasure of smoking two of these bad boys and right off the bat I was hit with a spicy sweetness – the sweet were dark fruit notes like cherry and plum that lingered throughout the entire smoke. Some black pepper began to creep into the mix and as I got more than half way through, there was a beautiful smack of floral notes that made the finish just so damned enjoyable. And speaking of the “finish,” this baby was long and lingering.

And what a fine job the rollers did construction wise as the draw created a ton of billowing thick, creamy white smoke. And that aroma has a wonderful lingering sweetness as well.

So, did I like this new Central American Punch. Um… hell yes, I say. Now while I sampled the smaller robusto size, I can’t wait to try the larger sizes to see if that affects the intensity and the concentration of flavors. So after a big, thick steak, go and pour yourself a nice whiskey or a Port wine then light up this new and most tasty smoking experience because there’s nothing like a nice big punch to the palate to make your day.

Pace Yourself: How Often to Puff a Cigar + 3 Cigar Smoking Tips