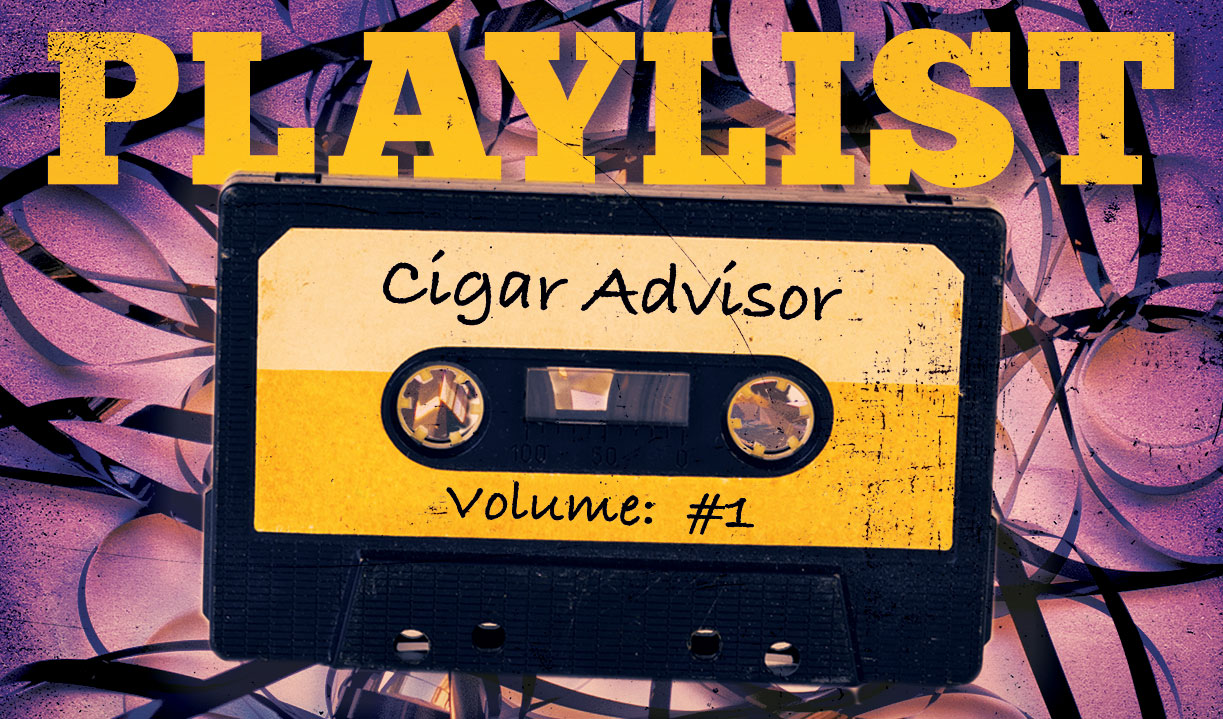 You’ll often hear cigar enthusiasts talk about pairings. Whether it’s with food or drink, the added flavors, in combination with a great cigar, can elevate your experience to a new plateau. The reason for this is found in our brain. Our senses are tied to memory, and the more positive stimuli we receive into our sensory cortexes, the better chance we have of creating fond recollections to recall in the future. We’ve released pairing guides for just about everything you can imagine from spirits, to beers and wine, to even fat-laden guilty pleasures you cook up on your grill.

Cigars, on their own, account for three of the five senses: taste, smell, and touch, and it could be argued that they stimulate our visual senses, too, especially when we’re smoking a cigar with eruptive smoke, or an aesthetically pleasing presentation. While pairing with food or drinks can accentuate your sense of taste, the only missing element is sound, and that leads us to this playlist.

On its own, music can flood you with memories. Songs that were pivotal to your coming of age, the ballad that you danced to at your wedding, or maybe even the one that got you through a lost love –  all of them act as perpetual time machines – transporting you somewhere that seems long forgotten to your everyday consciousness. Adding this element to a cigar, even when not paired with food or drink, allows you to stimulate your brain’s entire sensorium.

That being said, you already know that the Cigar Advisors have the whole premium tobacco thing down, but what you may not know is that each of us are veteran musicians, and as such, music lovers. As we research and write content that we feel is both educational and entertaining for you, we often have the speakers cranked to enjoy our favorite tunes. We’ve discussed at length how important music has been in our lives and even joked that if the tobacco biz ever went belly up, we’d probably all try to land a gig in the record industry.

In this monthly feature, we’ll be offering up songs that made a lasting impression on us and the cigars we smoked while listening to them. We’ll also compile them on Spotify where you can download the playlist and listen along.

And in case any of you want to call into question our sonic prowess, here’s a quick resumé:

Camacho BXP Ecuador is one of the most understated cigars around today. It’s not often on anyone’s radar, and I’m not sure why, because the cigar is astounding in flavor and interesting at nearly every turn. With a fresh, minty appeal to start things off, soon the cigar takes a savory/sweet turn with notes of dry nuts, leather, and citrus. This is a cigar that you should smoke at least once, but I’m pretty sure you’ll be coming back for more.

Both the cigar and the song rise and fall in their tone and overall excitement. Darling Pretty is guitar-driven and glassy, but not distorted and overpowering. I still remember the first time I heard the song, the chills it gave me, and how I realized then that Knopfler evokes such clarity and emotion with his guitar game. Camacho BXP Ecuador is punchy with flavor and poignant, but never heavy, and it similarly resonates as a cigar that was blended by a master.

Named for the renowned 19th century French Chef, Marie Antione Carème, who popularized the chocolate soufflé, Crowned Heads’ Le Carème cigars selection is one of the most impressive examples of tobacco blending, of which, only a master like Ernesto Perez-Carrillo could pull-off. Using Nicaraguan fillers bound in an Ecuadorian Sumatra leaf, and finished with a Connecticut Broadleaf wrapper, the Le Carème Hermoso No.1 (Spanish for “beautiful”), offers a medium-bodied smoke that builds to a full-flavored, medium-plus opus. With base notes of cocoa, sweet cream, raisins, cedar, earth, and a splash of citrus, the marvel is how this cigar oozes a ribbon of rich, chocolate cake. More than a so-called, “dessert cigar,” the Hermoso No. 1 is one of the most relaxing, full-flavored delights that satisfies mornin’, noon, n’ night.

Aja sets-up a lush, jazzy groove that courses through its lyrical stanzas, then breaks out in the final stretch to a brassy climax punctuated by Wayne Shorter’s tenor sax and Steve Gadd’s turbulent drum fills. The song is about a man confessing to his (presumably Asian) lover, why she’s the one he “runs to” when he feels the need to escape his stressful life – something a good cigar can also do. Like the song, the Le Carème Hermoso No. 1 starts off languid and seductively sweet. From there, the flavors begin to build slowly, caramelizing layer upon layer upon layer, then peak in a crescendo of much happiness.

For his fourth Herrera Esteli line from Drew Estate, Willy put the spotlight on Brazil’s most popular cigar tobacco – Mata Fina – for “its dynamic and unique texture.” It’s a sun-grown leaf that comes from the east coast in the Reconcavo Basin, about a full 24 hours by car ride north from Rio de Janeiro. Mata Fina’s taste is often described as smooth, rich and sweet – but there’s an undeniable earthiness to both the flavor and aroma.

The Herrera Esteli Brazilian Maduro quickly develops an attention-grabbing profile: raw and dark, with big shots of black pepper, charred wood and earth. There’s also a bit of gritty sweetness around the edges that tastes a bit like molasses to me.

The title might imply that another smokeable be paired with this song, and the vocal effect on the pre-chorus kind of drives that home. But I like this HE Brazilian Maduro/Sir Sly combo because they share the same kind of “dirty” groove: raw, gritty and earthy.

The video is weird as hell. But the beat stirs in your gut, and it’ll get your head nodding in time with the tune for sure.

High is the lead-off cut, and the whole record runs just shy of 40 minutes, so this Herrera Esteli Brazilian Maduro – and especially this size, the Short Corona Gorda – are delicious to consume together in one sitting.

“Them Bones” – Alice in Chains

The Sun Grown is a big, bold, earthy cigar with some noted sweetness throughout. It’s a beefy looking, slightly box-pressed stick packed with tobacco and covered with an oily medium brown wrapper. The cigars are aged for six full years and then they’re rested an additional 14 months in bourbon barrels to impart a rich sweetness and aroma. Notes of cedar, earth, nuts and spice deliver a hearty and complex smoke.

Them Bones is a hard driving tune with complex harmonies that Alice in Chains is known for. It’s a bold song much like the profile of the Perdomo, which is also complex. The Nicaraguan tobacco from three regions blend in perfect harmony like Layne Staley’s vocals throughout the track. The cigar’s Sun Grown leaves hail from the black volcanic soils of Nicaragua where I can see them bones being forever buried and long forgotten. “I feel so alone, gonna end up a big old pile of them bones.”

You keep on listening, and we’ll keep on adding! What songs do you listen to while smoking your favorite cigars? Let us know and… who knows… maybe we’ll feature your pick on a future edition of The Cigar Advisor Playlist!