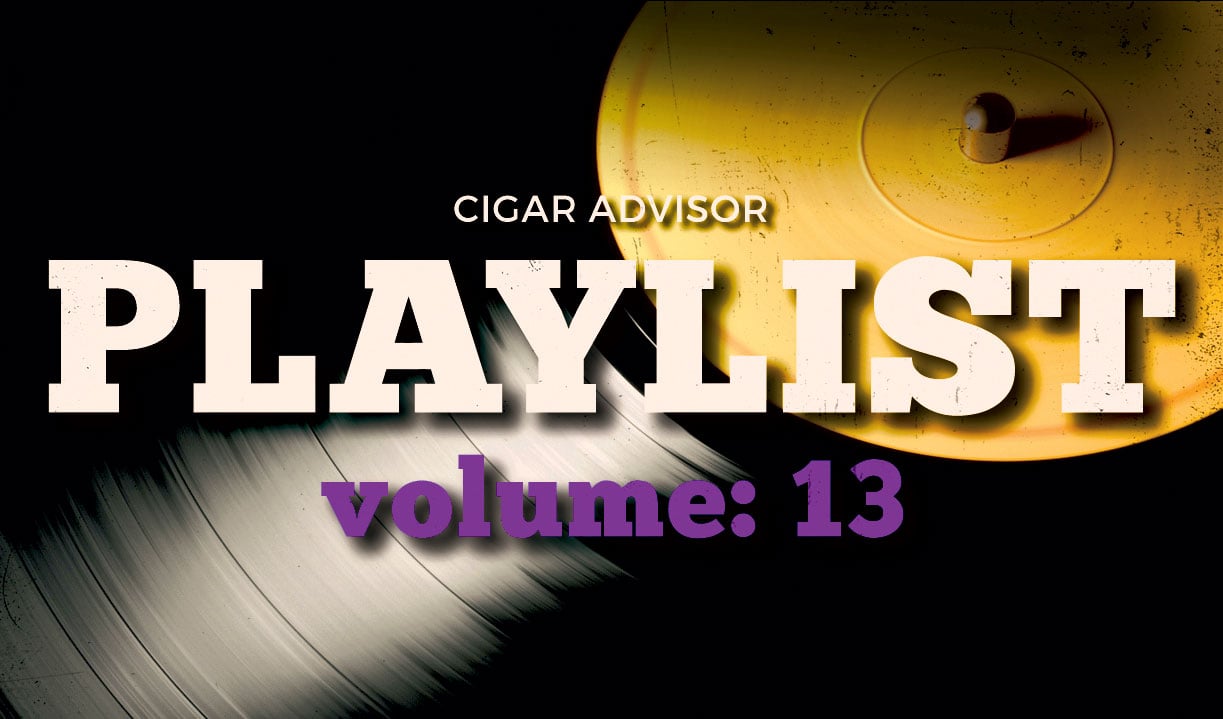 Remember your first cigar? How about your first concert? There’s a reason these things stick with us: our senses are largely responsible for creating memories. Put the two together, and you’re almost guaranteed to make some more fond ones.

That doesn’t mean you can’t experience music and cigars together. Some of you probably crank up the tunes already, but for those of you who haven’t (or those who want to expand their horizons), there’s Cigar Advisor Playlist.

Each month, we collectively slip away from our offices and head into the music room. We smoke cigars, listen to our catalog of favorites that stretch back decades, and pick a pair that speaks to us. And it works exactly how most other pairings do – we find blends that complement the song – like a full-bodied smoke and bourbon, or a Connecticut and coffee.


This month, we’ve brought Famous Retail Store Assistant Manager, Sean Lamb along for the ride. He’s offered his picks into what makes a great smoke–n–song pairing. Check them all out and let us know what you’d choose in the comments below.

Tatuaje Black is like an adrenaline shot to your senses. So far, makes sense – it is a Nicaraguan puro. But it’s what happens after that really impresses us. Once the cigar gets going, it rounds out into a smoother persona that’s underscored by flashes of pepper, cocoa, and leather. Another notable benefit of the Petite Robusto size is its shorter format. It’s an excellent choice for a quick smoke without fully diving into cigarillo territory. If you’ve never dabbled with boutiques, this could be the one to convert you.

When we light a cigar, we do so not out of habit, but to delve deep into our inner–most self. Many of us take this opportunity in order to stop time…to reflect on the day…or in some instance to relive a fractured piece of our nostalgia. This work speaks to me as I smoke the Tatuaje Black. The cigar’s deep and dark essence parallels the message of the movement. Sweet notes of cocoa and leather dance amongst the dry spice of black pepper and oak in a danse macabre, like a crisp fall morning.  It harkens back to a transcendental simplicity of nature.  For a moment I am taken away to a deep, dark wood amongst the oak and moss, where I myself, am working to cross my own river.

If you ask the new guard of smokers about Macanudo, the response you get might sound like, “my dad (or granddad) told me about those.” Many of Mac’s blends sit in the mellow zone, and you could be forgiven for breezing right by the name if you prefer fuller-bodied smokes. My advice? Back up and give Inspirado Red a second look.

Let’s talk about flavor. In this department, the cigar is like no Mac before it – dripping with chewy notes of wood, peppers, a hint of cocoa, and some sweetness in between. Kind of like those chewy licks Kenny’s playing on “Trouble Is…” that we’ll get to in a second. To be frank, I don’t think Inspirado Red ever truly goes full-bore, but that’s okay. You’re still getting way more than you’d ever expect from Macanudo.

Everyone’s heard “Blue on Black,” but if you dig deeper into Kenny Wayne Shepherd’s sophomore record, you’ll find some raw stuff. Like the title track, “Trouble Is…” It was recorded in 1997, but it could have been recorded just as easily in ’87 at the height of the late Stevie Ray Vaughan’s career. In fact, Stevie’s band, ‘Double Trouble’ accompanies Shepherd on the instrumental.

Kenny’s chunky guitar licks fill every nook and cranny, like butter on an English muffin. Chris Layton’s crispy snare keeps the groove in the pocket. Then there’s Tommy Shannon’s bass that’s deadlocked to the groove. It’s a song that – more than 20 years on – still gives me goosebumps every time I hear it. It’s like Stevie came back for one more song.

Both Inspirado Red and “Trouble Is…” bring their respective twists and turns, and both would welcome me home after a hard day. But together, they’re even more special. My heart beats a little faster. The hairs on my neck stand up. And I can smoke and listen on repeat. Pass a little more of the dopamine, please!

This one is blended to have a “back in the day” kind of feel. That is, Nestor Plasencia Jr. and Rafael Nodal got together and decided to make a throwback smoke, “reimagining” a popular cigar from the early 1900s.

So how did they make a new-old cigar? Well, Nestor has been putting extra focus on growing Connecticut-seed tobacco in Nicaragua the past few years, and it’s been coming up really well. Then the boys added a Nicaraguan binder and long fillers – so technically, Harvester is a Nicaraguan puro. And after all this work, it ends up as a bundle cigar.

While some bundles tend to offer few (if any) weeds to get into when it comes to discussing their flavor and construction intricacies, this pudgy Robusto has a bit more than average to talk about. And as we do, we enjoy it with an old school tune from the BEST Eagle – and Ringo Starr’s brother-in-law (did you know?) – Joe Walsh.

Harvester & Co. isn’t the most complex cigar you’ll ever smoke; I’d actually call it more multi-flavored, since I found clear, creamy-smooth notes of cedar, leather, spice and coffee – which is probably more dynamic than how cigars tasted a century ago (remember, this is a “reimagining”). Granted, the song isn’t wildly complex, either… just a great jam that shows off the Clown Prince of Rock’s incredible slide guitar playing skills. He’s slinky as hell.

As a classic rock radio DJ in a former life, I played this song hundreds of times (not an exaggeration). But it’s one of the few songs I played over and over and over but never got old. Everybody knows it. Everybody sings along. It was almost our national anthem, when Joe Walsh ran for – but lost – the presidency in 1980. And I can say from experience, almost everything he sang about is true:

I have a mansion but forget the price
Ain’t never been there, they tell me it’s nice

Joe Walsh joined the Eagles in 1975 and began working on Hotel California almost immediately. He spent so much time in the studio and touring, that he was hardly ever home.

I live in hotels, tear out the walls
I have accountants, pay for it all

Joe used to travel with a chainsaw “in case he needed to ‘modify’ his hotel room.” Which really meant renting adjoining rooms, and then “tear out the walls” in between to party.

Then, probably the most famous lines:

My Maserati does one-eighty-five (he did, it was a 1964)
I lost my license, now I don’t drive (it wasn’t taken by the cops, he just lost his wallet)

He wrote “Ordinary Average Guy” as a sequel to this song…and while Joe is very far from being either ordinary or average, he seemingly has the admirable ability to take nothing seriously. I aspire to someday give as few f*cks as Joe Walsh does. Because isn’t that the point of sitting back and smoking a cigar?

Partagás Legend is an homage to the people who made Partagás one of the world’s most iconic premium cigar brands, starting with Don Jaime Partagas and Ramon Cifuentes in Cuba, to Benji Menendez in the Dominican Republic. With its white band brightly contrasted against its dark, oily wrapper, this box-pressed Toro is not only stunning to behold, it’s a tribute to Partagás’ Cuban roots in more ways than one. Below the Connecticut Broadleaf wrapper lies extra-long aged Dominican fillers bound by an Honduran Olancho San Agustin leaf. The result is a layered, nuanced, yet full-flavored cocktail of earth, cocoa, leather, sweet spices, and an aroma to die for. Don Jaime would be very proud. And odds are, after wallowing in all this Legend’s deep, dark flavors, you’ll want another.

With all of the bright flavors that dance amidst this savory Toro, combined with Partagás‘ Cuban roots, it’s Mambo time! And who better than Tito Puente & His Latin Ensemble to start the party with this spirited, live rendition of “Ran Kan Kan.”

Suddenly, you find yourself in a Cuban nightclub, years before the Revolution. Hemingway, himself, is holding court at the bar buying Havana Club shots for everyone. The stage lights flood the bandstand and WHAM—those opening horn-blasting bars and machine-gun timbales of “Ran Kan Kan” cut through the din as dancers converge toward the stage from the shadows. You light-up your Partagas Legend Toro, turn to the bar with a raised glass of Havana Club to thank Papa Hemingway. And as you relish those first delicious puffs, montuños roil in syncopation to the rhythm like bats from a bell tower. The energy surges and you find it almost impossible to sit still. . .

This whole scene just oozes happiness, and we can all use a lot of that right now.

Reading Time: 5 minutes Something special for this edition of #nowsmoking: Gary teams up with Macanudo Brand Ambassador, Laurel Tilley, for an all-Inspirado talk – learn about Orange, White, Black and Red, along with our FIRST Macanudo Inspirado Green cigar review. Watch now!