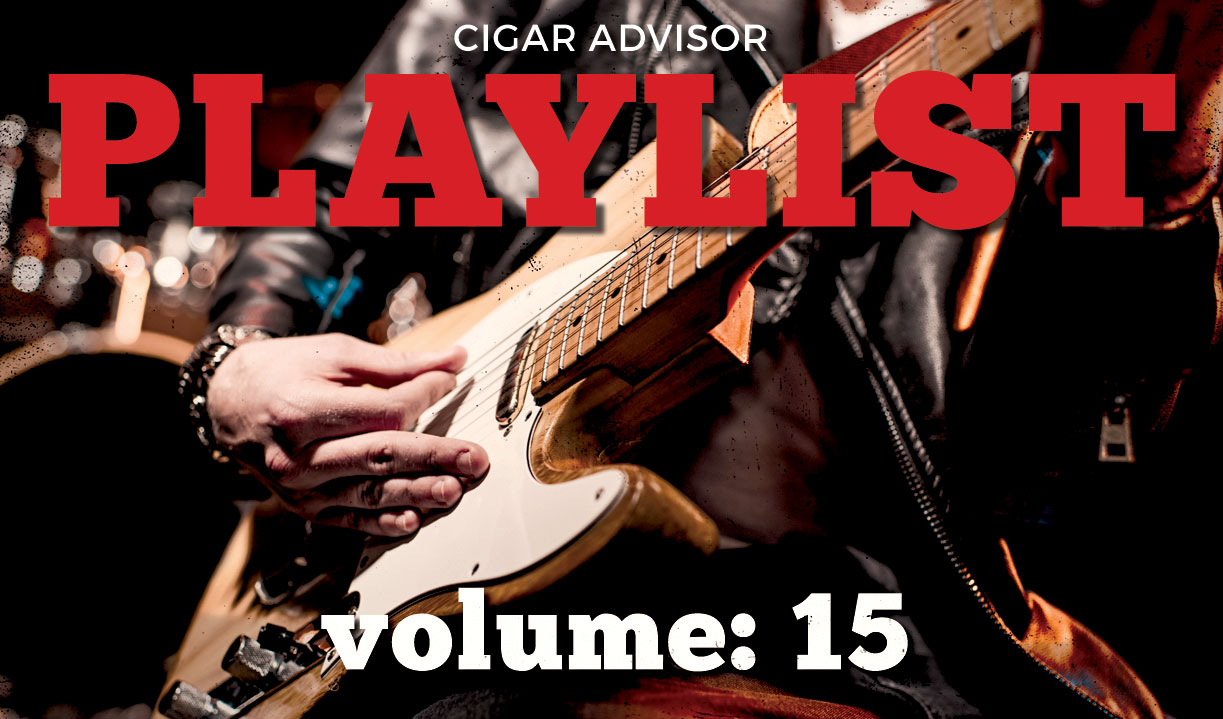 I remember going to diners when you could still light up a cigar after dinner. They’d usually have a jukebox, too. Smoking in a restaurant has been long banned nationwide, and even most of the dime and quarter-fed machines have been yanked and replaced with menu holders. Can’t say I blame them. There was always that guy blasting Nugent at 2:45 a.m. You know who you are.

With streaming services, finding your favorite music has never been easier. Just search for it on your phone or computer and voila – instant music. No dime or quarter required – all from the comforts of home, or your car, or your office – the list goes on. And no Nugent in the wee-hours, either!

If you’re new to Cigar Advisor Playlist, it’s a simple formula. We each pair a song and cigar and talk about why we think they’re symbiotic. Then we post our reviews here and share them with you. Our goal is to add another layer of happiness to the rewarding experience of smoking cigars. We hope you’ll follow along and download our official Spotify playlist for FREE.

September’s edition features Onyx Esteli, Rocky Patel Sun Grown, Sobremesa Brûlée, and a quick shot of music that spans four decades. As always, if you think you’ve got an epic pairing, share it with the class. Impress us enough, and we’ll feature you in a future edition!

“Gold on the Ceiling” – The Black Keys

Groundhog Day starts every morning about 8:30ish, as I commute down the hall and across my kitchen; most days I have time to stop off for a cup of coffee on my way to the dining room table. Every day the routine is…routine: first, un-sleep the laptop; second, bark orders to Alexa – my fellow WFH hostage for 9 months now – to start playing the Top Alternative channel (I do say “thank you,” however). The other day she included a curve ball, reacquainting me with “Gold on the Ceiling.” Nice throwback – so I thought it might be nice to play it again later, while I revisit an Onyx Esteli I had in my humidor.

This Robusto has that classic Onyx look – but this time it’s a bit less oily, now rolled in a velvety San Andres Maduro. And to a blimpy 54 RG, I might add. The Onyx Estelí burns in a mostly traditional Nicaraguan manner, with huge rips of smoke and a nice white ash. This is AJ Fernandez’ handiwork, but it’s probably the most overlooked piece in his portfolio.

Now – what do these two things have in common?

Everybody who knows the Black Keys knows El Camino for “Lonely Boy” – but this tune vibes much more nicely with a cigar. “Gold” is full yet unrefined, but not so deconstructed as to call it “raw” (that’s more [Keys’ archnemesis] Raconteurs’ territory). Same for AJ’s cigars: a lot of it is pretty high voltage stuff, but this version of Onyx is big n’ full bodied without being brusque. I’ve previously knocked AJ’s Maduros for not having the kind of sweetness I like – but for this Onyx Esteli he got it right, with a subtle molasses/licorice taste that shimmies its way in slowly and discreetly.

Smoke big and play loud, and you’ll get all the flavors you want from this solid Nicaraguan cigar.

Introduced in 2007, the Rocky Patel Sun Grown Sixty was added to the Rocky Patel Sun Grown line, which was first released in 2004. Fun fact: this version of “Route 66” was released the same year. The Sixty, which I intentionally chose for this “660”-themed post, is a big, beefy, medium-full cigar distinguished by a nifty little Cuban pigtail at the head. A blushing, buttery Ecuadorian sun-grown Sumatra wrapper, aged seven years, caps a five-year-aged blend of Nicaraguan, Brazilian, and Dominican long-fillers. The smoke reveals a savory cocktail of woodiness, sweet spice and nuttiness with underlying notes of ground coffee, and a sprinkling of white pepper.

And so we have “(Get Your Kicks On) Route 66.”  It was written in 1946 by actor, pianist, and singer/songwriter, Robert William Troup Jr. The Nat King Cole Trio is credited with the song’s first recording made that same year. It had a mellow, jazzy arrangement and earned Cole a crossover hit. But it was Chuck Berry’s 1961 rock n’ roll version that reinvented it. “Route 66” became an anthem for the mobility and freedom America’s highways offer. It’s one of the most covered songs in music history, and remains one of the best road trip songs ever written. Hailing from Plainfield, NJ, The Doughboys’ version is almost an exact replica of The Rolling Stones’ version, but with a lot more grit.

Depending on how you “play” it, the Rocky Patel Sun Grown Sixty will reveal itself in many different ways.  Take it slow and it offers a rich, creamy pastiche of caramelized flavors. Hit it hard and it can evolve into a rewarding spice bomb. So, fire it up! Smoke it with the car top or windows down while cruising one of America’s rural blue highways. Or, kick back for a memorable hour-and-a-half pleasure cruise in the hammock. Whatever you prefer, the song remains the same.

I know you’re probably thinking, “Fleetwood Mac covered Santana?” but it’s quite the opposite. Long before Stevie Nicks and Lindsey Buckingham turned the band into a power ballad phenom, Peter Green left a mark that should have been indelible. Sadly, many have forgotten. This reminds me of mellow cigars and how they’ve been forgotten, too. That’s why I was excited when Steve Saka unveiled the Brûlée. It wasn’t one of today’s Connecticuts “with attitude” as I so often call them, but one that winds the clock back with a classic profile. It’s just as smooth as the song’s bluesy mood and as naturally sweet as a cigar can get. Seriously. Like cane sugar! I got buttery nuances of cedar, cream, vanilla and some delicate baking spices at times.
That’s when it hit me.

Brûlée isn’t trying to be something it’s not. It just is. It was made to cater to an older school of thought. Yet, its mellowness is surprisingly modern because of it. I suppose that’s kind of ironic, but more, it’s proof that with today’s cigar demands, you don’t need something super spicy or heavy on flavor to enjoy a great smoke. I mean…no one was even asking for something like this – but the blend’s success suggests it’s precisely what we needed.

I asked Saka for his opinion on what genre of music Brûlée would best fit into, and he said, “Romantic Era Classical by composers where seemingly minor notes matter majorly. With its deft, yet soft impressions on the palate of the smoker, the Sobremesa Brûlée is best appreciated by the smoker who can identify the joy of complexity without the loudness.”

“Black Magic Woman” lives among Fleetwood Mac’s roots – as does a mellow cigar for just about every smoker. And none of the loudness Saka mentioned is anywhere to be found. If you’re in the mood for a mellow smoke that stands out from the crowd, I reckon you could find that from Brûlée.