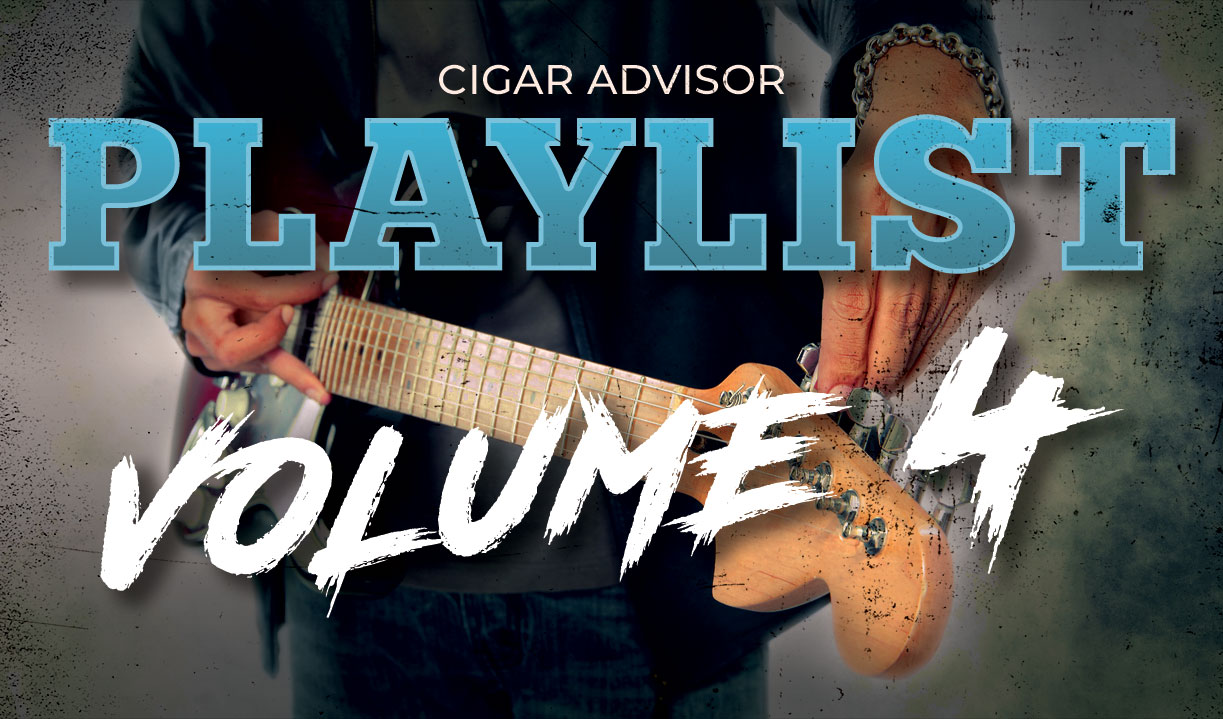 Whether you’re a devout audiophile who combs the used vinyl section looking for a missing piece of your collection, or a casual listener bobbing your head to a streaming service during your daily commute, music is likely a therapeutic part of your day. Cigars, for many, are relaxing, too, so it’s surprising that with all the cigar combos of food, drink, and just about everything else, music always seems to take a back seat.

That’s why every month, the gang here at CA offers up a pairing like no other: four cigars and four songs. Each of us has different tastes in what we prefer both sonically and as smokers, so there’s always a unique mix to keep things eclectic.

As always, we remind you that we are mere mortals; our tastes are subjective and may differ from yours. So while you could tell us how much our music picks suck, we’d prefer you channel your energy into submitting your dream song/cigar pairing in the comments below (just be warned, choosing “Have a Cigar” by Pink Floyd might get you some shady side-eye in return)… and maybe, if we find your duo exceedingly impressive, we’ll add it to a future edition of the Playlist.

As your pore over our picks, listen along in one of these two ways:

For volume four, we have some awesome cigar selections from Arturo Fuente, Henry Clay, Warped, and Southern Draw.

Admittedly, I slept on the 8-5-8 Maduro far too long. I smoked it with Gary in one of our recent Facebook reviews for the first time on his suggestion, and I think my socks are still somewhere in the vicinity of where we filmed. If you saw it in a store, you might pass by it on looks alone. It seems rustic and hastily rolled, especially for Fuente…but looks aren’t always indicative of quality. It seems their sights were zeroed on flavor and experience instead of presentation, and that’s a concept I can get behind. After all, once you’ve smoked your cigar, the visual aspect is gone, and you’re only left with whether you enjoyed it. My experience was brimming with notes of sweet cedar, citrus, and nutmeg-like spices, and it burned far better than its appearance would suggest. This will become a regular in my rotation, and I’d recommend it to anyone who puts their taste buds ahead of their eyes.

“Gimme Shelter” is similarly rough around the edges and filled with perfect imperfections in everything from Keith Richards’ twangy guitar licks to Mick Jagger’s growly vocals, and especially, Merry Clayton’s intense, high-register backup performance. During the climax of the tune, between 2:57 and 3:03, you’ll even hear her voice go out twice, more noticeably the second time, in a take that was so raw and powerful, the band is audible, off-mic in the background, with howling approval. In today’s age of Auto-tune and cookie-cutter tracking, performances like these are usually tossed to favor a more polished sound. The fact is, the honest wholesomeness that makes up the entire cut proves that shiny isn’t always better. 8-5-8 Maduro’s artisanal outside appearance, yet flavor-centric smoke, stirs the same way on my palate as the song does in my head.

Anytime the Henry Clay name enters the cigar discussion, it usually conjures the image of a tough, rugged-smoking cigar…but this is a whole new Henry, one that goes “against its tradition” of using a beefy Connecticut Broadleaf. More mellow? Yes…but only a bit: the Henry Clay War Hawk utilizes a smoother, silkier Ecuador Connecticut leaf; the Broadleaf is instead tucked away in the binder spot, meaning there’s still a burst of flavor waiting for you beneath the surface.

In this smaller size, primary flavors of earth, pepper and wood appear to make the War Hawk a very un-Connecticut smoking experience; slightly sweet and thick smoke that shows ample body and creaminess. I’ll still call it very accessible, but it tastes pretty rich at the right spots. Let’s say War Hawk knows how to be subtle when it needs to, and flexes its muscle at just the right times.

The tune hit #1 on the Alt chart last year, hailing from Zachary Dess’ (under the pseudonym Two Feet) debut EP. A shorter song like “Feel Like I’m Drowning” (cut 3) demands a shorter smoke, I think – but it’s only 8 tracks in total, so you can probably enjoy the whole thing in the time it takes you to smoke this Henry Clay Corona.

The moody mix of blues and rock licks jive with this not-mellow Connecticut nicely: it’s toasty, and runs through a series of flavorful changeups. That’s actually what brought this song to mind, as the peppery core cuts through the smoky mix, just as the deep bass synth punches through the chorus the song.

Again – subtle and powerful, at all the right times. Try ‘em together and see how you fare.

The Warped La Hacienda Gran Robusto is a boutique gem of a cigar. Highlighted by a dark, oily Corojo wrapper, the blend consists entirely of perfectly-aged Nicaraguan tobaccos grown on the Aganorsa Leaf farms. Notes of cedar, earth, and white pepper open the show. Once the cigar gets down to business, it blossoms into a smooth, creamy, and impressively complex smoke with a medium-plus body. Notes of sweet spice lead the procession of almonds, coffee bean, and tangy citrus that shift position, keeping you fully invested in the journey. For best results, savor it slowly.

When Jeff Beck released his all-instrumental Blow by Blow album in 1975 it showcased an entirely new sound for the former Yardbirds, Jeff Beck Group, and Beck, Bogert and Appice guitarist. Combining elements of rock and jazz fusion, “Freeway Jam” is a song I never get tired of listening to, and it’s arguably one of the best cruising songs ever written.

What makes the Warped La Hacienda Gran Robusto such a great match with “Freeway Jam” is how it parallels the song’s rhythmic changes and commanding energy. This is one fine cigar that, like a high-performance sports car, offers a smooth ride at top-speed, while perfectly banking the turns that rise up along its flavorful stretch of road.

This cigar is not for amateurs or the faint at heart. Make no mistake, it is an ultra-bold – might I dare say “strong” cigar that is a powerhouse of flavor and complexity. Blended by Robert Holt and rolled by the master, AJ Fernandez, it kicks your taste buds’ ass with notes of dark espresso, rich cedar, and a ton of spice. There’s also a very pleasant earthiness that brings it all together for the ultimate satisfying after dinner smoke.

I love heavy metal music, especially from back in the days when Iron Maiden, Dio, the Scorpions, and Black Sabbath were kings. But Judas Priest, with the searing vocals of Rob Halford were always the ones who banged my head the hardest. “Electric Eye” – with the dueling riffs of Glenn Tipton and KK Downing – is a pulse-pounding tune that kicks proverbial ass much like the Jacobs Ladder cigar. If I’m going to smoke a stick like this dark and rousing beast, I’m sure as hell not going to be listening to Air Supply. (And if you ever find that in my iTunes library, the words, “kill me now” should apply). Jacobs Ladder hits you hard and fast with in-your-face flavor much like this longtime favorite little Judas Priest ditty. Horns up and hail to the Metal Gods.