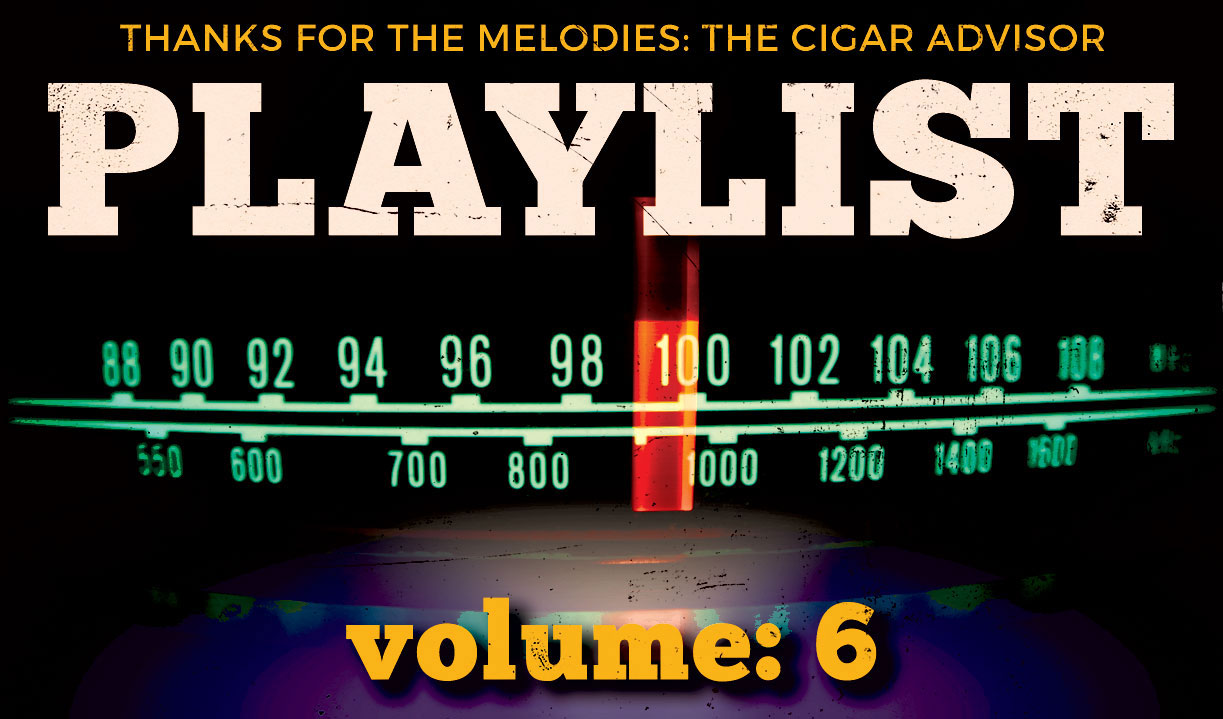 Here we are…Thanksgiving week. Can you believe it’s here already? For many of us, there’s a lot of travel involved, and one thing that helps to cure the monotony of countless hours you’ll spend in the car – or the airliner – are some great tunes. In that respect, we have you covered.

In our ongoing Cigar Advisor Playlist, we pair songs – new and old – with our favorite cigars and tell you why we think they mesh. We have eclectic tastes, and surprisingly, all three of us are musicians and have worked in the recording industry in one way or another. As a bonus, we caught up with Ernesto-Perez Carrillo (a jazz musician himself) to get his take on a dynamic duo.

It goes without saying that taste in music is just as subjective as it is with cigars, so keep that in mind as you mosey on through our picks. Keep an open mind and you just might find your next go-to song…and cigar!

Here’s how you can listen along:

In Volume 6, we have some solid cigars from E.P. Carrillo, C.L.E., Dunbarton Tobacco & Trust, and Drew Estate. We’ve paired them with a medley of sound from Chick Corea, Chris Stapleton, Kevin Fowler, and James Brown.

Time to turn it up!

The E.P.C. Famous 80th Anniversary blend is special both to Ernesto and Famous Smoke Shop because of the friendship the companies have. It’s why it proudly wears the La Historia band – because the relationship is much closer to family than business. The smoke is boisterous with pepper, wood, and sweet nuances, and it closes out extra creamy. You’ll want to smoke this cigar slow, because sticks this good should never be rushed.

To me, the song and the cigar share a similar dynamic – a similar complexity. Armando’s Rhumba matches the cigar’s rhythm and feeling note for note when you smoke it. That’s what I love about putting them together.

“I Was Wrong” – Chris Stapleton

C.L.E. Connecticut is a steady-as-she-goes, slow-building smoke that offers a lot more than its light wrapper would suggest. It starts out with some lively cracks of pepper, and then hastily rounds out to an even, medium-bodied profile in short order. From there, it’s a creamy ride of wood, natural tobacco flavor, and tangy citrus. That pepper – it reprises itself intermittently throughout the cigar’s duration, keeping things low-key, yet exciting. To put it simply, this isn’t your run-of-the-mill, lackadaisical Connecticut.

What I love most about this blend is that it’s a bridge cigar to help ease you into fuller-bodied blends. It’s like taking the training wheels off the bike, but still knowing your dad is right behind you. You get an extra rush without too much commitment.

Chris Stapleton got his start as songsmith, writing for artists like Tim McGraw, Darius Rucker, Kenny Chesney, and even Adele. His solo career leans on a country foundation, but he draws outside the lines with the inclusion of blues, roots, and even a garnish of Motown vibe. “I Was Wrong” seems to pull from the whole of that collective well.

Pairing the song with C.L.E. Connecticut, I noticed that they both invoke a strikingly similar emotion. Almost eerily. Those periodic spikes of pepper in the cigar remind me of Stapleton’s raspy, powerful vocals in the hook. The gradual climb to get there after each verse…it mirrors the cigar’s relaxed pace. When Stapleton belts, it rings the same as C.L.E.’s spiciness: complementing and never overstepping.

Try ‘em both and I think you’ll agree that they have a lot in common. Everyone goes through rough patches in their relationships, and whether you currently are or not, you can probably relate. This combo is medicine for the soul.

Presented in a plain brown wrapper, Umbagog cigars are named for the New Hampshire Lake Steve Saka fishes on near his home. The cigars are actually his top-rated Mi Querida cigars with one exception: the wrappers didn’t meet the Mi Querida standard. Advantage consumer. You’re getting a great cigar that usually sells for a few dollars more. (Hey, good movie title!)

The Toro Toro features a toothy Connecticut Broadleaf wrapper over an all-Nicaraguan leaf core. Creamy, sweet, spicy, and perfectly balanced, the smoke is so nice Steve named it twice. It’s not often you get to smoke a cigar of this caliber for fishing, hunting, or just everyday activities. But don’t stop there. It’s just as enjoyable for kickin’ back with a beer on the porch rocker, or with a good whiskey at the local saloon.

I’m not your typical Country music fan, but I love the songs that sketch a caricature of Redneck life. Kevin Fowler’s “Beer, Bait, And Ammo” is replete with twangy guitars, a wailing fiddle, and catchy lyrics. It’s also become a staple on the set lists of country greats, Sammy Kershaw and Mark Chesnutt. Light-up the Umbagog Toro Toro to this barroom ditty and you’ve got a shotgun wedding between North & South.

Fowler opens the song with, “Early one day, I was on my way to my favorite fishin’ hole. . .” You can imagine a couple of guys in a small boat, fishing lines in the water, smoking cigars with a beer-filled cooler at their side. Both the cigar and the song have a rustic aspect about them; plus, Umbagog’s smooth and creamy character follows the song’s natural swing. Together, they provide a feel-good experience and loosen you up – not to mention the beer.

Umbagog wasn’t just made for fishing, and “Beer, Bait, And Ammo,” wasn’t just written for playing on a honky-tonk jukebox. They’re all about enjoying life’s simple pleasures – and so it is.

I used to think of these Ligas (Ratzilla, Dirty Rat, Velvet Rat, etc.) as Drew Estate’s Misfit Toys: unique LPs that never had a home, until DE gave them their own “Unico Serie” island. It wasn’t until later that I realized these savory morsels were the product of meticulous blending sessions. As I wrote in our Liga Privada Cigar Guide, “It’s really an exercise in seeing how much little proportions of different tobaccos (and where they’re used in the cigar) can make a big difference in the final taste of the smoke.” As members of James Brown’s band have confirmed the legend that he was an incredibly demanding bandleader, they also said his ruthless penchant for precision brought out some of their greatest performances; considering how much tweaking was done to these Ligas before Drew called them finished, it’s not a surprise that Ratzilla burns with such top-tier complexity.

Now…when you’re pairing a smoke with the Godfather of Soul, you better make it something that’s got a few impressive moves. JB is unleashing some straight up funk here – and for me, Ratzilla is an old school Liga that’s got swerve to match.

I Got the Feelin’ (the album – hear the cut here in all its mono glory) was released in April 1968; the title track hit #1 on the R&B chart in short order, and was a staple of my old man’s record collection. Just talking about it brings me back to that sound of when he’d drop the tone arm – pop! – followed by the hiss and crackle as the needle set into the groove. Within seconds, the first notes from Bernard Odum’s bass and Clyde Stubblefield’s drums would burst forth from the speakers, punctuated by some sharp horn hits. The Funky Drummer’s groove is energetic, but somehow still laid back; and the whole band feels like they’re on the edge of bursting into a funk jam that would knock down a wall. You can’t make sense of it; you can just feel it – and be forced to nod your head with the beat.

Ratzilla catches me the same way: a couple of puffs in, the smoke is on the edge, ready to burst with sweetness; instead, it takes a creamy turn, and settles into a rich, slow burn that finishes with a taste of stout Nicaraguan coffee. If you like “punchy”, then go ahead and retrohale this cigar – you’ll appreciate how it hits you. It’s a spice-monger’s delight. And since this Corona Gorda will last you, keep the feeling going with “Cold Sweat”, “Give It Up or Turn It Loose” and “Get On the Good Foot.”

Reading Time: 2 minutes You ready for the Rockiest Top New Cigars yet? In this edition of Top New Cigars, Rocky Patel takes the spotlight as we take you on a brief tour of all his new arrivals. Check it out now!