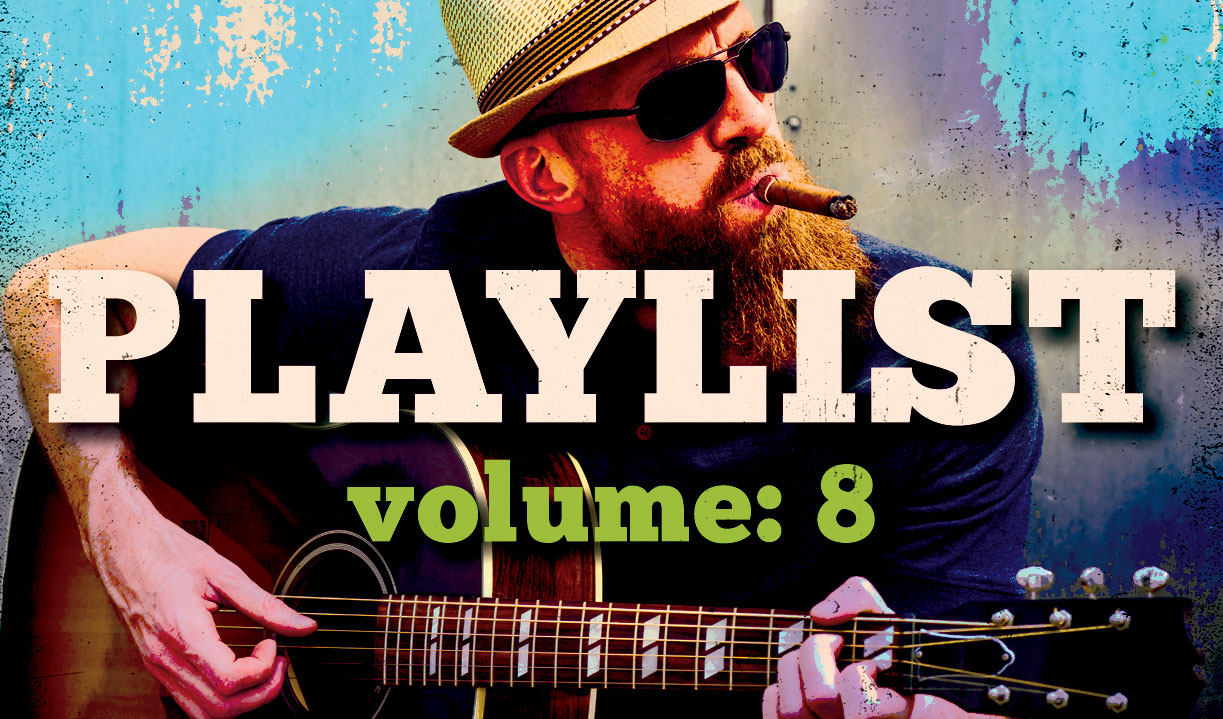 Whether it’s a savory medium-rare steak, a sweet Kentucky bourbon, or a strong Cuban coffee, what you pair with your cigar is just as important as the cigar itself. Music can be just as – if not more – important to complement the mood. We’ve explored the sonic side of pairings, now more than 30 songs deep. In Volume 8, we caught up with Robert Holt of Southern Draw Cigars who finds musical inspiration in every cigar he’s ever blended.

We too, have thrown irons into the fire with three of our own picks. (Nope, we’re still not doing “Have a Cigar”.) From classic rock, to jazz, country, and alternative – just about every genre you can think of has made an appearance – along with a wide variety of cigars that hit the spot. In this month’s edition, we feature cigars from Southern Draw, CAO, Asylum, and Protocol…… and music from Deep Purple, Frank Zappa, Pearl Jam, and Sammy Kershaw.

Follow along by downloading the official Cigar Advisor Playlist for free on Spotify, or rock out in real time: the videos will play while you read!

And don’t forget to let us know what you listen to when you smoke in the comments below!

Sharon and I have been married 24 years. When we started Southern Draw, the only thing I had to give her was a cigar with her name on it. She could have been anything, but she decided to be a spouse, a mother, and a philanthropist. I typically start my day with a Rose of Sharon. It’s got a cold draw of cream, the aroma of fresh ground coffee, and some soft peanut butter sweetness. The post-light is slightly woody. My palate picks up a tiramisu-like profile, coffee, sweetness of a soft baked cookie, and a hint of white pepper and citrus. Toward the end, the creaminess balances some cinnamon and light pepper. Lastly, the final third finishes like the crema on a perfect Cuban espresso.

“She Don’t Know She’s Beautiful” is the original song of Southern Draw. Rose of Sharon got started with that song because to me, it was always about the humility of her as a person. Sharon is a beautiful, sweet, very gifted lady. I think the most important thing about that song is that, like her, it’s all about humility. If I didn’t use that song as a reference, then none of the rest would have mattered. It was all built on that. Every cigar we make has a song, but this one has the most meaning.

Think bullshit session, as opposed to session beer – because this CAO cigar’s vibe is less about making beautiful moments, and more about a relaxing burn while you jabber with your friends. The pet project of CAO’s Rick Rodriguez, it starts with the crowd favorite, a gritty Connecticut Broadleaf; a healthy double dipping of special Dominican and Nicaraguan tobaccos adds bonus flavor, but gives this Toro some strength, too.

As Rick has told us, this cigar is meant to be enjoyed most socially, while in your garage or out on your porch. And that’s by design: not every satisfying “cigar experience” requires parking your hindquarters in the plushest of the leather armchairs. Besides – the hoi-polloi in a lounge like that wouldn’t appreciate you cranking the dial on classic Deep Purple.

Granted, Session is not yet on the tip of everyone’s tongue when we play the “name a CAO cigar” game. So if you’re not well-versed in CAO, you might have been led to believe your options were limited to Brazilia, Gold and Flathead.

Same for Deep Purple: many people are hard-pressed to name anything more notable than “Smoke on the Water” and “Space Truckin’” (and MAYBE “Woman from Tokyo”).

But then there’s “Lazy” – where Jon Lord’s Hammond organ intro commands your speakers to suck up every available watt and burst forth in all its gritty, spaced-out glory. You, meanwhile, are leaning back in your chair, maybe even muttering “oh f*ck yeah” under your breath as the hard blues riff kicks in. That’s why these jive: gritty and rich, from the first note to the last. Satisfying indeed.

“Dance of the Clairvoyants” – Pearl Jam

Sir Robert Peel is Cubariqueno’s (you may know them as Protocol) tip of the hat to the 19th century British Prime Minister who founded modern-day police ethics. Considering Cubariqueno is law-enforcement owned, SRP fits the brand perfectly. The cigar comes wrapped in two options: a natural Ecuador Rosado and a Pennsylvania Broadleaf Maduro. I chose to highlight the former as it’s, in my opinion, their best cigar to date.

Finishing with an emphasis on cream and cedar, the blend is naturally sweet and refreshingly smooth. There’s some zest and pepper for some added intensity, but it straddles the line between medium and full-bodied. It’s the kind of cigar made for an intimately lit smoking room. Just you, a comfy chair that swallows you whole, and some great music to drive the experience.

“Dance of the Clairvoyants” is binary – both digital and analog. It starts off synth-heavy, reminding me a little of Talking Heads (for you ‘80s kids out there). Instruments filter in slowly as the song progresses, and by the time it’s over, the computers have been replaced entirely by the full band. The magic is that this is all so gradual, you don’t really notice it on the surface. You just know it’s grown into something purer. As someone who spent a great deal of time recording bands in my previous life, I can tell you with certainty – a transition from contemporary to classic of this magnitude is not easily accomplished. Neither is crafting a great cigar.

Sir Robert Peel is binary in its own way, too – oddly mellow and strong at the same time. Moreover, I love the way that both the song and the cigar have bucked tradition from their respective creators’ roots, paving a new path and evolving with time. If you only ever smoke one Protocol cigar, Sir Robert Peel Natural should be it.

The Asylum 13 Medulla Oblongata selection – so-named for the part of the brain that controls such breathing, blood pressure, and heart rate – is one of the most ambitious (and in my opinion, one of the best) projects from Tom Lazuka & Christian “C.L.E. Cigars” Eiroa. Using a core blend of perfectly aged Honduran tobacco grown on Christian’s El Corojo farm, the line is offered in two wrappers: Honduran Corojo and Mexican San Andrés Maduro. Then they took it one step further: The “Medulla” shapes are round-shaped parejos, while the “Oblongata” are box-pressed. It may sound a little confusing at first – like listening to your first Frank Zappa & The Mothers album – but the Maduro blend is outstanding in how the dark, naturally sweet wrapper melds with the spicy Honduran core. The smoke is creamy, opulent, full-flavored, and consistent from end-to-end. My personal suggestion is to try the Robusto in both wrappers and shapes.

Asylum Cigars have built their brand on the theme of various mental states. Asylum Lobotomy, Insidious, Schizo, and Straight Jacket are some prime examples. That said, most unassuming folks listening to the late, great Frank Zappa for the first time – especially with The Mothers of Invention – would probably says he’s a bit mental. That may be true, but Frank was also a genius. I’ve always believed that Zappa was to music what Howard Stern has been to radio – one of those exceptionally rare talents that will never be replicated in our lifetime.

“Montana” is one of those songs that has everything “Zappa:” a quirky, humorous storyline that’s more spoken than sung; a chorus that drills its way into your memory cells; and one of Frank’s hottest guitar solos. It starts with the languid pace of an old farm horse, mostly with just a bass line driving it. That sets the scene, and you can almost envision Frank atop his “pygmy pony” sauntering through the vast acreage of dental floss. (Don’t ask.) By the end, you feel totally pumped, and those final refrains of “yippy-aye-oh-ka-yay” by Howard Kaylan & Mark Volman are infectious.

The Medulla Robusto starts at a meandering pace, as well. It’s a slow burn, and an even one at that, offering a rich, spicy, and creamy smoke. Eventually, notes of earth, sweet spice, cedar, pepper, and salted caramel enter the fray. At its midpoint, the cigar breaks into a more focused profusion of flavors with rock-steady balance, then winds-up again for an exuberant finale. It’s just the kind of cigar that will keep you in good company while riding through the Montana plains on horseback. Yippy-aye-oh-ka-yay!