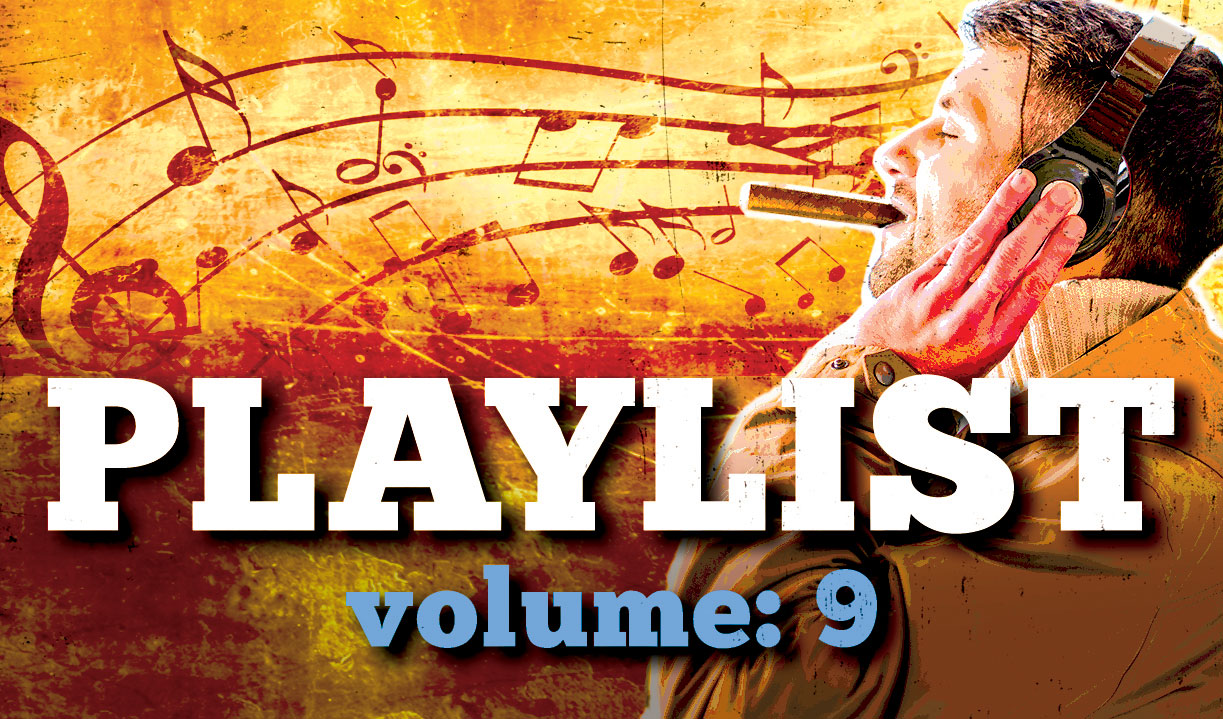 Pretty soon, the Cigar Advisor office will be lined with platinum records. With nine volumes now under our belt, there’s 36 songs to enjoy, along with 36 of our most recommended cigar blends.

If this is the first time you’ve stumbled upon the Playlist, you may be wondering what music has to do with cigars. Cigars on their own primarily account for the stimulation of two of our five senses: taste, and of course, smell. Pairings with food and beverages can add to the enjoyment factor, but sound was always the red-headed stepchild. You see, science tells us that the more senses we stimulate, the better the chances are of creating fond memories. Let’s go ahead and stack the odds in your favor.

For each of the following pairings, we have chosen a song and a cigar that we feel perform in synchronicity. Additionally, we reached out to Nestor Plasencia of Plasencia Cigars to get his picks, so make sure to check his out, too! We feel that we should spread the love…because this ain’t no ordinary cigar jukebox. We’re high-speed streaming these smoky tunes to your favorite smart speaker all day long.

Get the Cigar Advisor Playlist on Spotify for FREE!

And just remember, our taste in music (and cigars) is subjective. Have a perfect duo of your own? Let us know in the comments below!

If you haven’t yet discovered the masterpiece that is Plasencia’s Alma Fuerte, this size gives you six reasons to fall in love. The Sixto II features a daringly original hexagon pressing that provides a sensuous slow burn, notes of vanilla, and a sweetly smooth-‘n’-spicy profile that sways in lockstep with “Está Rico.” It simply begs to be smoked. In a word, Alma Fuerte is flawless and it speaks to the contemporary cigar enthusiast in ways that few blends can rival.

Nestor: “I love that the cigar is featured in the music video of this song. In the lyrics they say, ‘This is delicious’ and that’s just like the Alma Fuerte!”

Editor’s note: Not too shabby! We’re not sure how many manufacturers have their cigars featured in music videos, but we’re guessing it’s a pretty short list. If you’re looking for the spotlight, keep your eyes peeled at the 00:17 mark. Nestor’s right, though. Alma Fuerte is incredibly smoke-worthy and a prized addition to any humidor. As a bonus, each box comes with a branded wooden ashtray.

It’s hard to believe that My Father Cigars’ Don Pepin Garcia cigars are nearly 17 years old. Commonly nicknamed “Blue Label,” these cigars started as instant favorites and have kept a feverish pace since. The profile is bold, but inviting, and the list of smokers – both new and old – who enjoy them runs long. Exceedingly sweet, and with a Nicaraguan core of earthy and spicy tobaccos, one will notice Blue’s hints of wood, coffee, cream, and peppers. It’s just the kind of stick to burn slowly while listening to the blues (the nickname doesn’t hurt, either). That’s where John Mayer comes in.

Admittedly, this is the guy who wrote “Your Body is a Wonderland.” Basing his music on that, and the scores of other bubblegum hits he’s released, John Mayer’s decidedly earned his rep as a flushable wipe. If you look beneath the surface, however, he’s bridged the gap of pop and blues, earning respect from the likes of Eric Clapton, Buddy Guy, and the late B.B. King…to name a few. “Slow Dancing in a Burning Room” echoes Mayer’s bluesy roots with a mesmerizing rhythm section. Add to that some deep and dirty guitar savvy, and universally relatable lyrics, and you’ve got the perfect storm for getting lost in the moment. Especially when Blue Label follows the same tempo. John Mayer probably isn’t top of mind when you’re thinking of guitar legends. Don Pepin Garcia may not be when you’re looking at My Father’s portfolio, either. Sometimes, though, you just gotta dig a little deeper to find the gold.

The #10 cigar of 2018. Need I say more? No, but I will anyway because everyone says, “Pullo always has a lot to say.”
Made only with Nicaraguan tobaccos, this Montecristo is a collaboration with – surprise – AJ Fernandez. His blending influence here is obvious, slaying the taste buds with an eye-opening set of flavors: powerful earth, sweet tobacco and charred cedar, all against a black pepper backdrop. The intensity of the flavors (and of the cigar overall) has a neat way of ratcheting up, then easing back – a lot like revving the gas, watching the tach needle going back and forth, back and forth. If you thought Montecristo had lost its groove, and stuff like Monte White and Platinum didn’t move you anymore – this one may renew your faith.

“When life gives you lemons,” said Ron White, “you should make lemonade…and try to find someone else who life handed vodka to, and have a party.” If we’re grading this party on a scale, “The Lemon Song” is a rager – going from a reverb fiesta to a gritty stomp, then to a subtle jam thick with sick bass lines. And then back and forth, back and forth. Proof of the American Blues being so heavy an influence on British bands at the time, in this mashup (before that was even a “thing”) you’ll find influences of the Who’s Who of Blues: Robert Johnson, Albert King and others, all layered on top of Howlin’ Wolf’s “Killing Floor.”

Just like the Monte Nicaragua, Zeppelin’s potency comes and goes in phases – and resonates with both fine qualities and funky, raw edges. The smoke is dense and rich; so is the tune. Also – pretty sure that’s not how you make lemonade, but…pair this Monte and this tune and I think you’ll find yourself in a perfectly good mood, nonetheless.

Since 2001, every March 22nd Davidoff of Geneva has released a limited edition Avo cigar in honor of Avo Uvezian’s birthday. Eleven years ago it was the Avo LE 09 Compañero which, in 2010 returned in the form of the Avo Heritage collection. To be clear, Avo Heritage wasn’t note-for-note. Based on the Compañero blend, it was more like a really good cover. Blended with Avo’s longtime compañero, Hendrik Kelner, Heritage has proven one of the most outstanding compositions in the Uvezian-Kelner songbook.

“I wanted a line that caters to the seasoned cigar enthusiast who demands a complex, full-bodied smoking experience,” said Avo in the Heritage press release, and who would have been 94 this past March 22. It was also considered the most “full-bodied” Avo cigar at the time. 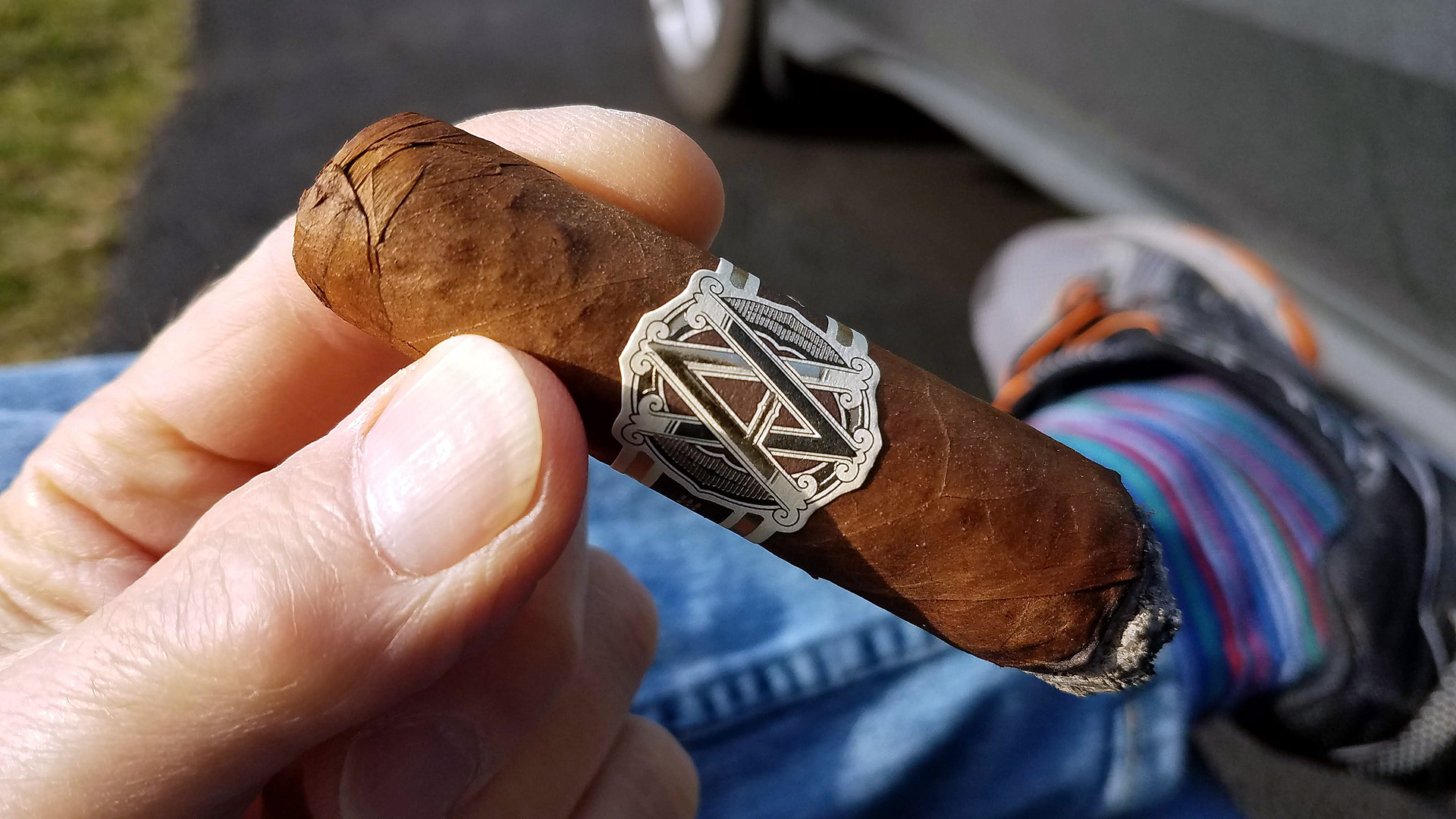 Like all Avo’s, the Heritage Robusto displays immaculate construction, a perfect draw, and velvety smoke that melts like butter on the palate. Heritage is built on a base of three Dominican ligeros, Dominican seco, and some piquant Panamanian seco, all bound in a San Vicente leaf. Add that majestic Ecuador sun grown Habano wrapper and you have a smoke that teems with toasty notes of hazelnut, sweet cedar, nutmeg, orange peel, and a suggestion of cocoa.

I’d classify the Avo Heritage Robusto as mostly medium-full; however, once you get to the coda, peppery spice lights-up those final stanzas with fortissimo aplenty. All-in-all, a full-flavored masterpiece of a cigar that piques all of the senses.

The first cigar choice that came to mind for pairing with Johnny Cash’s cover of Soundgarden’s “Rusty Cage,” was an obvious one – the Crowned Heads Jericho Hill Willy Lee. It happens to be a personal favorite, yet, I chose the Avo Heritage Robusto for its rust-colored wrapper and the fact that, like the song, it was essentially a cover of a classic. Cash’s band for Unchained was Tom Petty & The Heartbreakers. And here’s a sad coincidence – Uvezian, Cash, and Petty are no longer with us.

In a 2016 Rolling Stone Country article, “Johnny Cash’s ‘Unchained’ at 20: Inside the Making of a Masterpiece,” Will Hodge wrote that producer Rick Rubin was “eager to have Cash record some more unconventional fare” and suggested Soundgarden’s “Rusty Cage” from the band’s 1991 album, Badmotorfinger. Listening to Cash’s version, you’d think he penned it himself. The lyrics also evoke a sense of desperation often found in Cash’s music. The song, as Hodge writes, “became a celebrated cornerstone of Unchained,” earning Cash a Grammy nomination for Best Male Country Vocal Performance.

Both the song and the cigar have more in common than I expected. Like the chords emanating from Cash’s Martin D-35, the Heritage’s rich, creamy flavors waste no time in setting the mood. Well-defined flavors arrive immediately and hold steady for the first and second acts. At the one and a half minute mark, “Rusty Cage” breaks into a gritty, bass-line driven rock anthem that builds in tension and power. Similarly, the Avo Heritage Robusto eventually reaches that precise moment when it gets to break its rusty cage and run.

Reading Time: 5 minutes Onyx Reserve cigars have enjoyed a very loyal following; now, this modern classic gets kicked up a few notches with the Onyx Esteli, created by AJ Fernandez. An all-Nicaraguan core gets treated to an almost pitch-black San Andrés wrapper; it sounds tasty on paper…but did Onyx Esteli pass our panel’s taste bud test? Watch now, and find out!