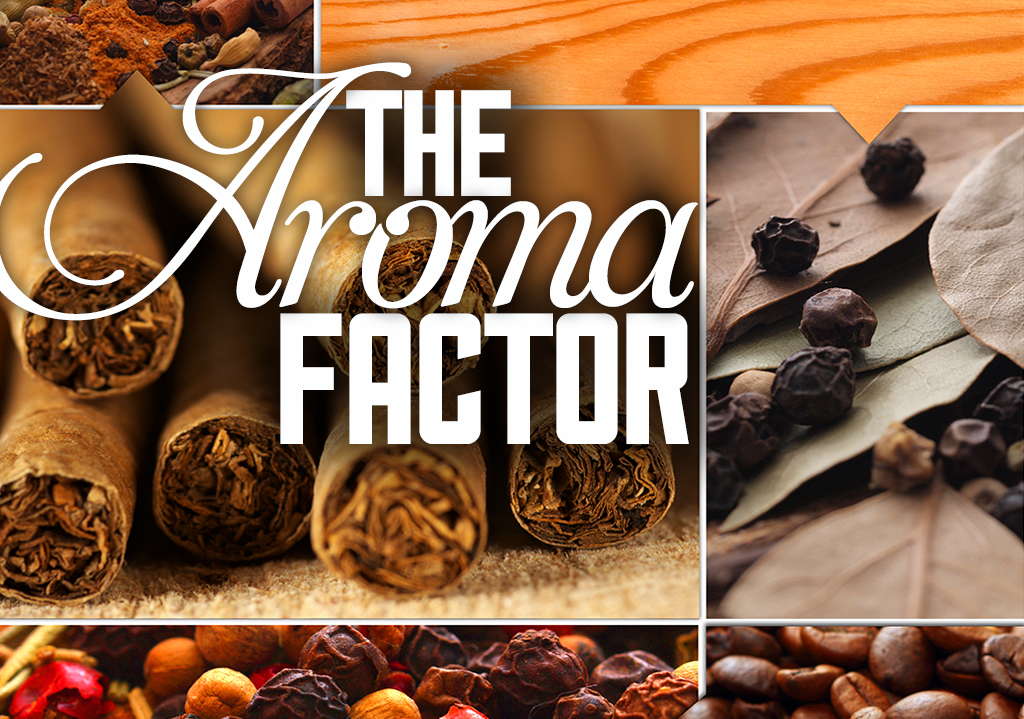 Sometimes I wonder how much cigar lovers factor in cigar aroma when smoking their cigars. Cigar magazine ads often refer to the wonderful aroma the cigar has in their copy, but on the whole, flavor beats aroma. To be fair, the more active cigar smokers tell me aroma plays an important role in their overall enjoyment of their cigars, but it rarely enters the conversation. Aroma is certainly a big factor for me. The very first cigars I smoked weren’t exactly household names like Arturo Fuente or Macanudo. I don’t even think they were handmade premiums, but I smoked them because they had such a great aroma. Eventually, I wised-up.

One of the few times I actually got a direct compliment on the aroma of my cigar, I was smoking a Davidoff. I don’t mean to single them out, but aroma has always factored heavily in their cigars since the late Zino Davidoff began selling them under his name in the 1940’s. The quintessential cigar-smoking experience just isn’t complete without aroma. Not unlike aroma therapy, it’s also one of the elements that helps us relax.

The charm of a good cigar’s aroma is one of the things that non cigar smokers don’t seem to get. How many times have you seen someone crinkle their nose in disgust while you’re smoking what you perceive as a great-smelling cigar? In another article on aroma titled “Why Aroma Matters,” I wrote: “No matter how good a cigar smells, if you’re around people who don’t care for cigars in the first place, they all smell rotten to them; even the best-smelling cigar won’t change their minds.”

A cigar’s aroma seems to hit you more while the cigar is in your mouth because your nose is also much closer to the smoke. Let’s talk about that for a moment. Certainly, you’ve read cigar reviews that cite flavors of wood, leather, Cuban coffee, toasted almonds, cherries jubilee, pickle spices…you get the idea. Those so-called flavors aren’t necessarily coming so much from deep inside the cigar itself as they are from its aroma, since smell and taste are directly related. Many cigar smokers say they don’t taste any of those flavors, which is sort of a shame, because I’ve “tasted” flavors like nutmeg, coffee, cedar wood, hazelnuts, all of which are very appealing. Or have I? Maybe taste is the wrong word. Maybe better words to appraise a cigar would be to say, “…one gets a sense (or an awareness) of hickory and espresso up front…”

What we smell and taste in a premium cigar has a lot to do with the quality of the tobaccos in the blend. Did you ever see a blender stick his face deep into a hand of tobacco and take a deep sniff? They do it for a good reason. They are sniffing for a particular aroma that tells them when the leaf is ready. I remember Nick Perdomo Jr. telling me that a certain Nicaraguan tobacco smells just like honey when it’s fermented.

Aroma is as subjective as flavor, and perhaps the only way to truly appreciate the aroma of a cigar is when you’re the only smoker in the room. I’ll never forget the time I was smoking at the bar next to a friend who was smoking a Liga Privada No.9 cigar. The aroma was so redolent, it overpowered the aroma of my cigar.

Suffice it to say, whether you buy cigars for their flavor, aroma or both, one thing remains constant: No matter how the cigar tastes, it always gives off an aroma. After all, that is the nature of smoke.

[…] cigar. It’s the secret ingredient found in many of the best cigars. As I wrote in my article, “Why Aroma Matters”, “Great aroma doesn’t just come from the wrapper, but ALL of the tobaccos in the […]

Hi . whats is causing the aroma and taste in cigars ? I mean why a cigar has aroma ??

Reading Time: 19 minutes If you’ve passed on H. Upmann cigars, the Cigar Advisors have 9 reasons why this great Cuban heritage brand deserves a spot in your humidor – get the full smoking experience with our NC H. Upmann cigar reviews inside!

How to Toast and Light A Cigar