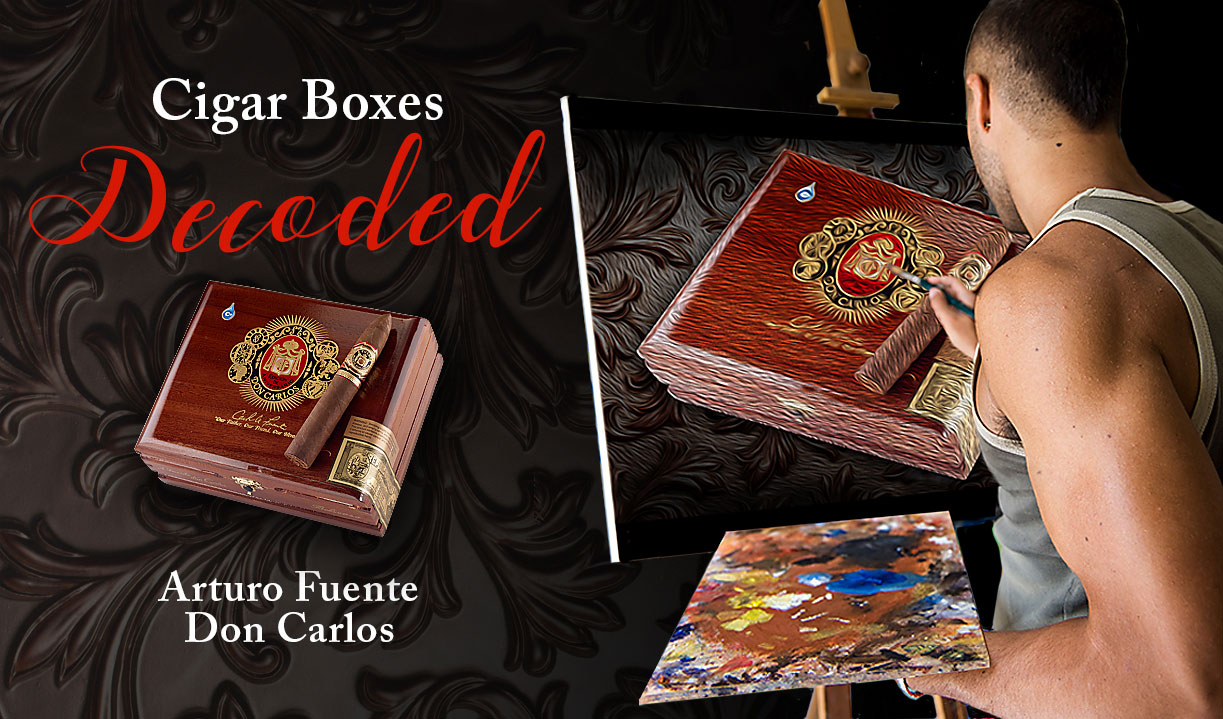 Learn the story behind the smoke through Fuente’s cigar box art.

Beyond blend and flavor, the box can tell you a story about a cigar. It is art; and in many cases, a very personal expression by a cigar maker. “Everything means something,” says Liana Fuente about Arturo Fuente Don Carlos, her favorite cigar. “Don Carlos was my grandfather’s blend, he loved it very much. Until the day he died, he always had two sticks in his pocket – one to give to a guest, and one for him to smoke.” The box was designed by her father, Carlos “Carlito” Fuente Jr., who she said is “very devout to traditions” – so we asked Liana to decode Don Carlos, and share her comments on these traditions with you. 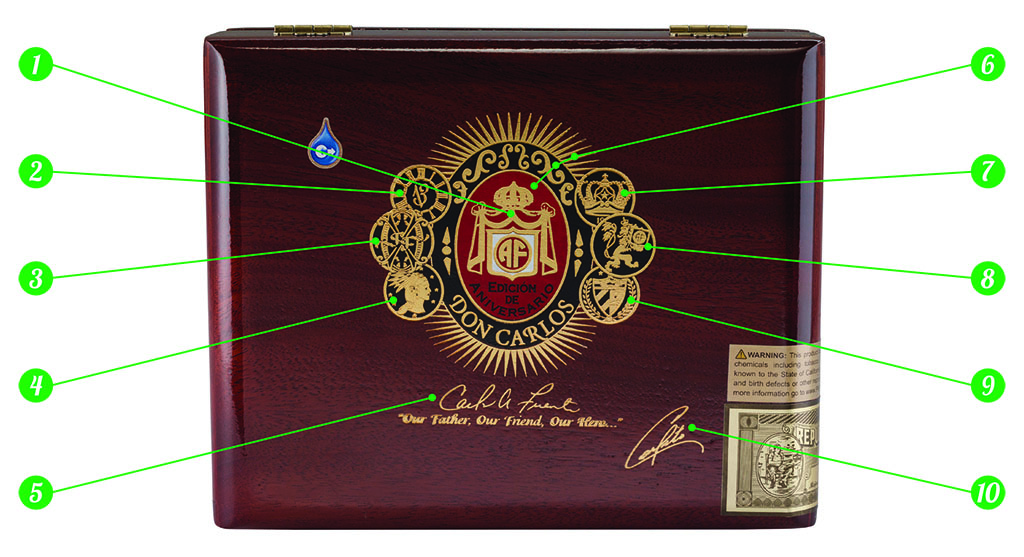 Clearly, there’s more than marketing going on with this Don Carlos cigar box: it’s Carlito’s personal expression of pride in his family’s work and worth. Of course, not every box is this ornate, but even the cigar boxes that have the most minimalist designs still bear markings that represent something important to, or about, the person who made them.

Which is one of the (many) reasons why the cigar industry was in an absolute uproar when the U.S. Food and Drug Administration issued its 2016 Final Deeming Rule. FDA’s plan was to place huge health warning labels on premium cigar packaging. That sparked its own series of lawsuits, filed by cigar makers who argued that this requirement not only stifled creativity and advertising, but denied them of their First Amendment right to freedom of expression.

Thankfully, this part of the Rule was shut down a month ago when the D.C. judge overseeing the industry’s fight with FDA determined these massive warning label requirements were illegal.

Why Cigars Come in Boxes

As we get into the art, it’s worth asking why cigars ended up in boxes in the first place.

Writer/historian & cigar museum curator Tony Hyman broke it down for Aficionado a while back when he called out President Abraham Lincoln:

“Desperate to raise wartime revenue, a beleaguered President Lincoln imposed taxes on a long list of 19th-century ‘luxuries,’ including soap, perfume, playing cards, photographs, bank checks and patent medicine. In 1863, he also called for a tax on alcohol and tobacco. But, it is one thing to impose a tax, quite another to collect it.”

As Hyman tells it, cigars back then were shipped from the factory in barrels then sold by the stick, or maybe by the handful. By passing a law requiring that all cigars, “foreign or domestic,” had to be packed in wooden boxes (quantities varied from 25 to 250 cigars) – it gave IRS agents “somewhere to paste a stamp proving taxes had been paid.”

By 1900, cigars were serious business: four out of five American men smoked them, sparking a huge “connoisseur culture” that would have put the ‘90s cigar boom to shame. We’re talking billions of cigars, made by hand, all packed in boxes.

That’s when cigar makers became smart marketers. All the cigar boxes on the shelf looked alike, so they needed to find a way to stand out from the competition. And they did it by prettying up the box with an artful presentation to match the luxurious smokes inside. Scenes depicted traditional Cuban farms and fields, or indigenous people that introduced tobacco to the Europeans. Others had awards, logos, insignias, famous people…anything and everything that represented “the good life,” and would catch the attention – and wallet – of the cigar smoker.

Since then, cigar makers have taken the artwork on cigar boxes to an even higher level. The Don Carlos above is a prime example. The odd thing – actually, we’ll call it my peeve – is how often so many cigar boxes end up in the trash. Cigar makers give attention to every little fine detail on the cigar boxes and bands, as Gary talked about in this post, wondering “how often they must go completely unnoticed by us cigar smokers.”

No wonder so many of us keep our empty boxes – it’s almost insulting not to.

There’s art on those cigar boxes, all of it worth appreciating. So I’ll leave you with the same advice Gary gave about peeling off your cigar band: “Take a good close look at it. A lot of thought went into creating it.”

What a wonderful article. So very well written and thought out. Best in a long time. More please!

Thank you for the education!

The ONE thing I wanted to know about the box was left out. WHAT is the blue,(droplet)? about ? I regularly smoke Don Carlos #3’s and #4’s.Have kept many boxes,but just too darn many to keep,so I put cigars in them and give as gifts.

Blue droplet? Could you be referring to the graphic that shows the box has a Boveda pack inside?
That’s a great idea about the old boxes, but do your giftees know they’re not what’s in the box? ;-)
G-~

Read More
Cigar Buying Guides
Our look at the top new cigars for the first week of April 2018 - Spring has sprung, and these releases from AVO, Romeo y Julieta, La Aurora, Macanudo and Debonaire are coming at you fresh as a daisy. Some of these picks are in very limited supply; so if you're looking for a new humidor addition, click and read now!
Read More