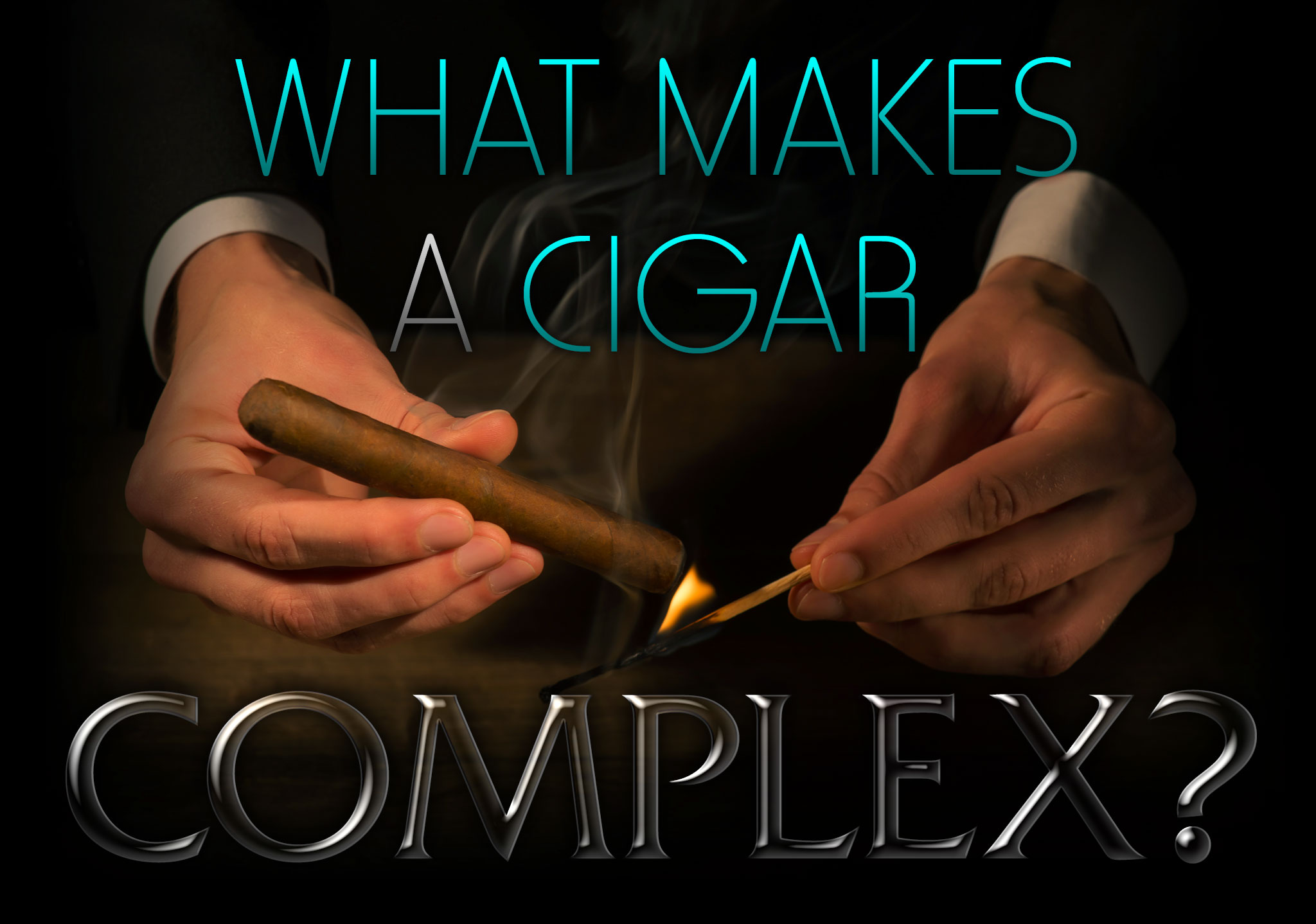 What Gives a Cigar Complexity?

One of the better qualities a premium cigar can possess, especially for more experienced cigar smokers, is a flavor profile that’s complex. OK, that sounds great, but what does it really mean?

In his opinion of the 1964 obscenity case, Jacobellis v. Ohio (378 U.S. 184), Associate Supreme Court Justice Potter Stewart wrote: “I can’t define what pornography is, but I know it when I see it.” That’s how I tend to view “complexity” in a cigar. It’s hard to define, but I know it when I taste it. Odds are, if you’ve got a few notches on your cigar case, you know it when you taste it, too. But what about new cigar smokers? Sometimes I wonder if complexity is something they should be made aware of early on, or simply left for them to discover for themselves as they develop their palate.

The way I see it, “complexity” is an amalgam of flavors and aromas that tend to build or improve within a given cigar as you smoke it. As David “Doc” Diaz, Ph.D. defined it in his article, How and Why Cigars Age – Part 1, “Complexity is the emergence of layers and multiple combinations of flavors within a cigar and is a feature of well-aged tobacco.” Not too far from my definition, but what makes Doc Diaz’s explanation clearer is his use of the word “layers.” Although cigar complexity may sound like a jumble of flavors turning over like tickets in a raffle drum, it seems more appropriate to describe the flavors as overlapping, or building upon each other. Moreover, Diaz attributes the amount of complexity directly to the aging process:

“As the cigars continue to age and marry, the flavors will change and may become less distinct. This is because the oleoresins, which carry the bulk of the flavor in a cigar, will slowly evaporate.”

This cuts both ways. For one, the cigar may be less complex because some of its flavors have mellowed over time. On the other hand, flavors that may not have been present when you first bought the cigar may appear as new, because months or even years later, they’re no longer obscured by other, stronger flavors in the tobaccos. So, the more diverse the blend, and the better fermented and aged the tobaccos, the better the odds are that the cigar will be more complex in flavor.

What the pros say about complexity in cigars

Prior to writing this article, I contacted some of the cigar industry’s most respected cigar makers and asked how they defined complexity in a cigar. Here’s what they had to say:

“Complexity is basically the flavor profile in a cigar changing as the cigar is being smoked, says Ernesto Padilla of Padilla Cigars. This is achieved in different ways. One way is how the roller bunches the cigars when he goes to refill the bunch in certain areas. When they have the bunch in their hands, most rollers take from the bottom of the bunch and fill towards the top. So, for example, if too much ligero leaf is placed towards the mouth of the cigar you might experience more pepper or strength. Another way I thrive for complexity is by combining different tobaccos from different countries that complement each other’s flavors.

While researching this article I came across two cigar forum discussions on complexity; one on Puff.com, the other on CigarAsylum.com. Both forums had similar responses to the question, “What is complexity?” It was pretty much unanimous that complexity means “multiple flavors” in the cigar; how those flavors were achieved is another matter. In the Puff.com discussion on complexity, one member wrote: “Many cigars have dominating flavors that are easy to recognize. To me, [complex cigars are those in which] I pick up flavors that I don’t immediately recognize.” Another member wrote: “To me, complexity is both the changing and the melding of flavors in a cigar. When I find a cigar very complex it’s usually b/c I can taste multiple flavors at once (melding),” while another member saw complexity as more than just about flavors: “I would agree about it being the changing flavors … but also coming together to make [a] flavorful smoke. But it’s not just the flavors. I guess you can call it texture? Goes from spicy, to creamy, to rich, and then back to spicy, but staying nice and smooth the whole time.”

Over at the CigarAsylum discussion on complexity, one member wrote: “IMO, complexity is when a cigar gives you so much more than just a simple flavor and smoke. A cigar that boggles the mind [so] that you wonder…”WOW, that was awesome and I am not sure why!… The complex ones for me are the ones that, when done, just make me sit back and reflect on that cigar for quite some time.” Another member added: “For a cigar to be complex, it has to have two factors: a combination of multiple flavors at once, with at least 3 phase changes throughout the cigar. A cigar with a bunch of flavors all at once that I can’t tease out and indentify is generally “muddled” while complexity usually implies balance to me.” There was also this take on complexity: “Personally, if a cigar has a nice set of flavors that are balanced, I describe the cigar as balanced, not complex.”

This idea of associating complexity with balance is actually quite prevalent. It’s not right or wrong, either. Where the discrepancy comes in is, some cigar smokers feel that if a cigar has a lot of different flavors, they should all be equal in presence. However, one could make the argument that the imbalance of flavors is what makes a cigar complex, like when a dash of spice enters the mix pushing a sweet, or nutty flavor off to the side, but not necessarily out entirely.

Depending on the type of smoker you are, or what you like most about the cigars you prefer to smoke, balance may hold a higher place for you than complexity. As several people in both posts noted, a cigar doesn’t have to be complex to be really good; it can have just one or two flavors all the way through and be sensational.

One thing seems to hold true for complexity, and that is, full-flavored cigars tend to be more complex than milder cigars because the tobaccos tend to be richer in taste, and as Doc Diaz pointed out above, the oleoresins in the leaves evaporate much more slowly. Though there’s little connection between a cigar’s price and how complex it is, the more expensive cigars tend to rank higher on the complexity scale because they use more fully-aged and specially selected tobaccos. Fortunately, as I pointed out in my article on The Best Cigars for $5 and Under, there are many multidimensional cigars to be had in every price range…which brings us back to where we began. No matter how you describe complexity in a cigar, you know it when you taste it.

Reading Time: 3 minutes Blended by Aganorsa Leaf Cigars, Gary and Jared take a couple of vitolas for a test drive in this Famous Nicaraguan Selection 6000 cigar review. Gary is smoking the Churchill, as Jared smokes the Toro. With only an inch difference in length between the cigars, see how well they met our rating criteria.