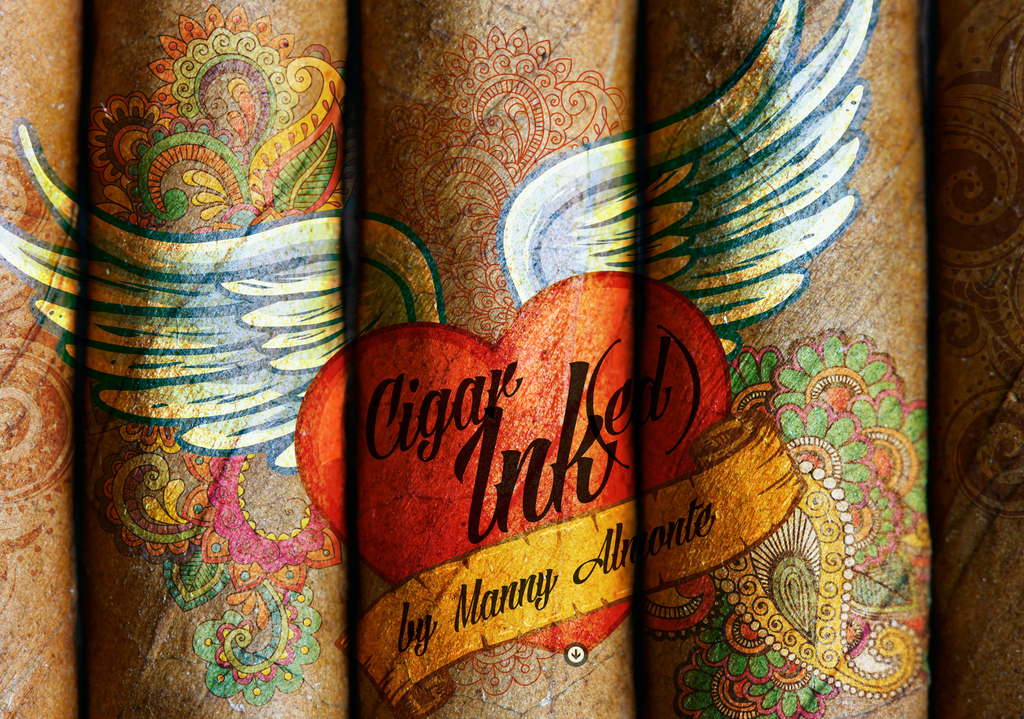 Ever wondered what goes through the mind of tattoo enthusiasts who have portrayed their favorite smoke as cigar ink? What if we could somehow reverse this, and ink a tattoo…ON THE STOGIE?

As it happens, Key West, FL is not only home to Hemingway’s cats and the Conch Republic, but also to a Cuban who brings us the fascinating art of the “inked cigar.”

Yes; I know; this blew my mind too.

Enter one Carlos Manuel Matalobos Fernandez, a self-taught 53 year-old artist who found his craft the day he asked his friends to teach him how to be a “torcedor,” or cigar roller. At first, the idea was simply for him to be able to roll his own cigars. He had watched as his childhood friends, who grew up working in the local cigar factories of his hometown in Cuba, rolled cigars personally suited to their individual palates.

Carlos wanted to experience this, but the moment he sat down at that small table with the beautiful tobacco leaves and the rustic metal chaveta before him, he saw something different altogether: ink, color, and a canvas, being rolled into a cigar.

You see, what Carlos had discovered was a “natural cigar ink” that comes from cigar tobacco leaf. By placing a piece of tobacco on a wrapper leaf and applying pressure, an imprint is made with a color corresponding to the amount of pressure exerted, and the overlaid piece of tobacco. Amazingly, by using a combination of dark and light wrappers, Carlos can produce 60 different colors. When these techniques are wielded by an artist who can also draw beautifully, the result is nothing short of awe-inspiring.

Carlos has been living in the United States for three years now, living and working as a cook at the restaurant of a friend who is helping him get on his feet. He even created a Facebook page to promote his work. He dreams of gaining enough exposure that manufacturers would be interested in using his talent to create limited edition cigars. He is so skilled at his craft that he could take any logo, image or painting, and replicate it on a cigar wrapper.

Back in Cuba, circa 2007, he won a major award at one of the annual state-sponsored tobacco festivals. He brought with him eighteen pieces of his work and put them on display, earning praises from organizers and visitors alike.

The following year, Partagas approached him to participate in the “Tobacco Week Festival,” where people are invited from all over the world to be entertained and participate of what the island’s tobacco industry has to offer. Fernandez brought a beautiful cigar box containing a total of 30 cigars. The top 15 cigars each bore a full art piece, while the bottom 15 had their familiar red paper bands removed, replaced by an inked version instead. Even the cigar box had his art work. It raised $4,500 at auction, benefiting the Cuban Health Department.

Carlos’ favorite subject is women – beautiful, naked women, whose bodies contour the natural curves of the cigars themselves. The head, body and foot of a cigar take on an entirely new meaning in this context. Now imagine you taking a puff of that baby…if only you could bring yourself to toast the foot, and see her go up in flames. Ouch!

His work is made mostly as a form of expression, and it doesn’t depend on high quality tobacco. He can cross the street to the gas station adjacent to the restaurant where he works and pick up a $1.79 cigar. After just ten minutes of work, made at a table with three simple tools, he can transform it into a $30 cigar and sell it at one of the fairs and festivals he now frequents through out the state of Florida.

After the Partagas event, a company by the name of Cimex asked him to make a limited edition production of 1,000 cigars. The opportunity was golden; his dream was coming true. But while the offer from Cimex was there, the tobacco was not.

Although tobacco represents a significant part of Cuban culture, private citizens are prohibited from owning or growing quantities of tobacco, or selling tobacco products to private companies. This is something Cuban citizens don’t like to gamble with, given the potentially grave repercussions. Rather than risk imprisonment or worse, Carlos Manuel sought and was granted a Spanish visa, allowing him to come to Key West, FL.

Asked if he’s in it for the money, Carlos explains that while we all need to make a living, he is also an artist; he derives satisfaction from the praises and critiques of the people who see his art, and longs to exhibit to a larger audience. When I told him I was based out of New York City, he excitedly told me that his ultimate exhibit would be at the city’s famous Fifth Avenue Nat Sherman Townhouse. He wants to bring his work to the city where dreams are made, even if those dreams are made of cigars tattooed with tasteful nudes.

I’d say he has a chance. The best part about his art? With a quality, well-aged canvas, his cigars will transcend a beautiful curiosity, becoming instead a multi-sensory work of art. Paired with a glass of rum, perhaps even Hemingway would approve.

For now, Carlos will continue to cook for locals and tourists, create smokeable art to sell at events, and keep the dream alive.

Born in DR, Made in NYC, Manny has made a habit of carrying a piece of his homeland with him: always rolled, preferably smoked with good company and a bottle of rum.

Reading Time: 4 minutes An Open Letter to the Premium Cigar Industry – this is why Famous Smoke Shop will no longer support the PCA, or attend the 2020 trade show.