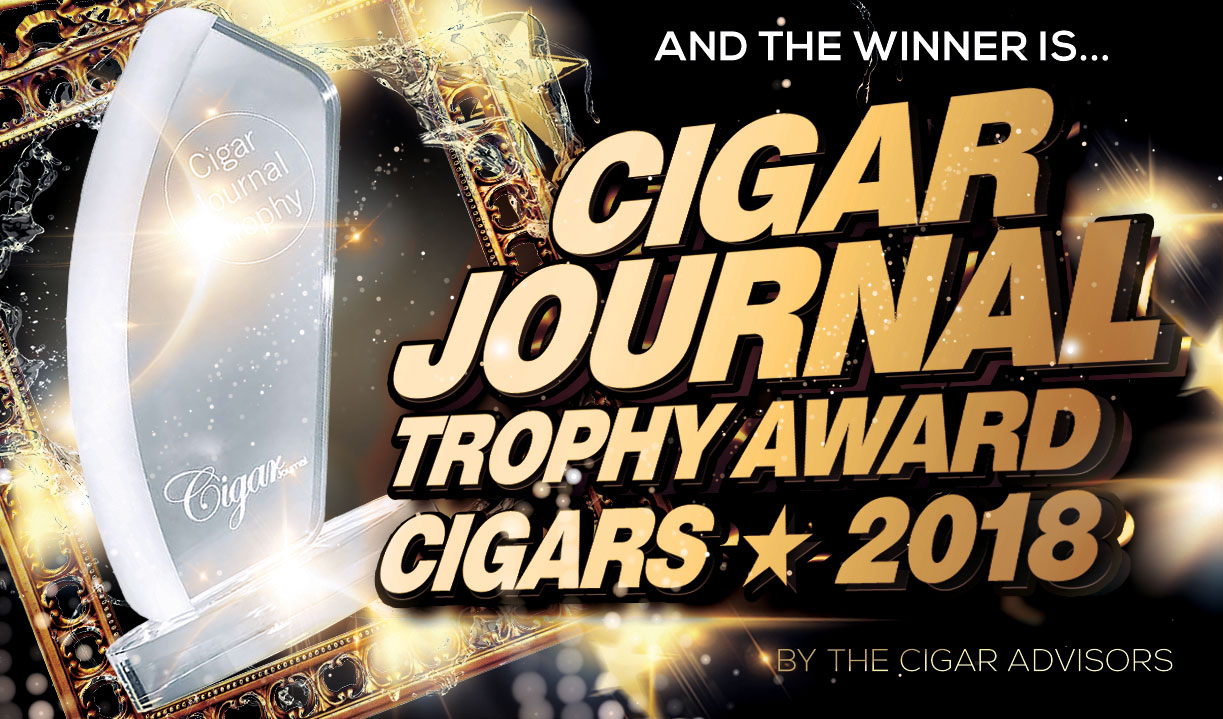 When the cigars are that good, and the people have spoken…it’s time to launch a Best-of list.

It’s the Cigar Journal Cigar Trophies, just handed out this weekend at the InterTabac show in Germany. First presented in 1998, they’ve become the most sought-after honors for exceptional cigars, brands, and service in the cigar world. The winners are selected by a combo panel of experts and everyday cigar enthusiasts like you and us, making these awards just as much “the people’s choices” as they are the picks of the pros. And so, in this “first” for Cigar Advisor, we wanted to reveal to you – and give our take on – the winners for “Best Brand,” “Best Cigar,” “Best Value” and more, along with a few reasons why each cigar earned its trophy.

For a few years now, the Cigar Advisors have had a partnership of sorts with Cigar Journal magazine: we’re part of their international team of editors, writers and contributors who has, for over two decades, been covering this unique cigar world we all enjoy. And one of the reasons we hold their magazine in such high regard is because they, like us, believe everyone benefits from the sharing of tobacco knowledge and experience – and helps draw our cigar smoking community together. (Check out some of our work here and here).

For each edition of Cigar Journal, literally dozens of cigars are smoked, described, and rated. The descriptions and ratings are based on the opinions of the Journal’s experienced, 60-person panel of cigar smokers. And because judging is done via blind tastings, all of the cigars are rated on a neutral and fair basis, be they established brands, new products, or newcomers.

First presented in 1998, the Cigar Journal Cigar Trophy awards have become the most anticipated awards for honoring the “knowledge, enthusiasm, commitment, and hard work of those within the cigar industry.” And we look forward to the list because readers get a say, along with that 60-person jury, in helping select the winners. (Ed. Note: none of the Cigar Advisors nominated or voted on any of the selections, to keep our CA Report fair and unbiased.) 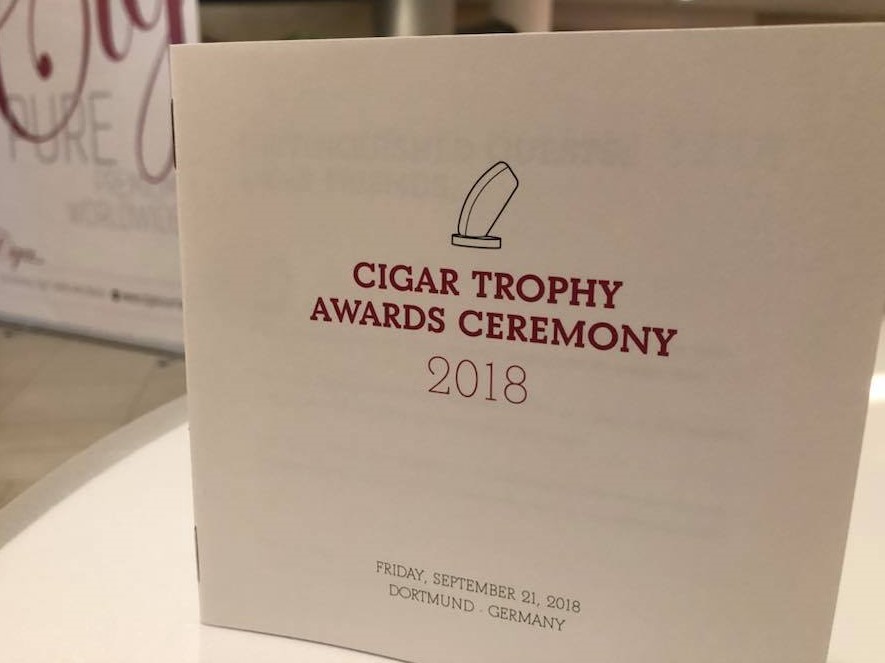 All Cigar Trophy nominations must adhere to strict guidelines: the nominated cigars and accessories must be currently available for sale; only one nomination per person and category, and companies that offer benefits or gifts in exchange for the nomination of their products – including advertising – are disqualified.

The final voting round took place June 20-27, after which the winners were chosen and announced at the InterTabac Dortmund trade show September 21st, 2018.

And the 2018 Cigar Journal Cigar Trophy Award Winners Are…

Since most of the Cigar Trophy awards are given to the cigar brands, themselves, for this CA Report we used a similar method as Cigar Journal to choose the individual cigars. Where applicable, we chose the frontmarks within each awarded brand that had the highest Famous Smoke Shop customer rating scores.

One of our Best New Cigar picks of 2017, the Davidoff Winston Churchill Late Hour Churchill also made Cigar Journal’s Top 25 Cigars of 2017 – so it’s no surprise the entire brand took the Trophy Award this year. (Apparently, the readers love this selection, too.) The tobaccos for the Late Hour cigars are aged in Scotch casks, providing a welcome accent to their complex flavor profile—and Sir Winston certainly enjoyed his Scotch. As for the Late Hour Robusto, it falls right in line with its big brother. The perfectly-balanced smoke issues creamy layers of oak, coffee bean, the occasional ingress of black pepper, and plenty of sweet spice, all the way to its bold, yet bitter-free conclusion.

La Volcada is LFD’s tip of the cap to the tango, the elegantly intense “dance of love” …and that pretty much sums up how this Cigar Trophy winner performs. Dominican tobaccos are at the core here; then comes an Ecuador Corojo for the binder (a leaf borrowed from the Andalusian Bull’s blend) and wrapped in Mexican San Andres (borrowed from La Nox) that’s finished with a pigtail. If you’re intrigued, set aside 2 hours for this small batch production – it’s made in one size and one size only, a 7×48 Churchill, and smokes nearly-full with dominant notes of woods and pepper.

Kristoff Original Maduro is a modern-day classic made in the image of an elite Cuban cigar. With a 91-customer rating, this boutique Dominican cigar offers a myriad of rich nutty spices, cocoa bean impressions and a sweet dark chocolate finish. The oily Brazilian Maduro wrapper is adorned with a pigtail cap and a rustic-looking shaggy foot that offers a medium-full body with a satisfying experience. While darkly sweet and rich, Kristoff Original Maduro is ideal smoking with an after-dinner espresso or a peaty glass of Scotch.

Alec Bradley has long produced top-shelf premium smokes, garnering impressive reviews and ratings. But Alan Rubin and company have really upped their game with several of their most recent releases, most notably the Prensado Lost Art. While the original Prensado Churchill was honored with a major award in 2011 – a very tough act to follow – this new addition to the family boasts an undeniable complexity, featuring rich and luscious notes of bitter-sweet chocolate, roasted coffee, sweet wood and a dash of pepper and spice. It is impeccably constructed as the box-pressed shape produces a smooth draw and a whole lot of sweet aromatic smoke.

Something extra-special about Plasencia’s Cosecha 146: while the name translates simply to “harvest,” it’s really intended to mean a single-year harvest – meaning all the tobaccos used in the cigar were taken in one season. In this case, it was Plasencia’s 146th crop cycle, which happened in 2011-2012. Those prized single-year tobaccos include a mix of Honduran and Nicaraguan longfillers finished in a Honduran Habano wrapper. Though Cosecha 146 is billed as “a medium-bodied, full-flavored cigar with a complex and sweet taste profile,” it really leans more to the mellow side…but Plasencia will not stand for bland: there’s a goodly amount of spice plus a bit of sweet earth, and the aroma is somewhat floral. Worth the 6 year wait.

The Eiroa family set the standard for Honduran tobacco with their famed Corojo leaf, a rich spicy varietal of tobacco that’s often imitated but never duplicated. Asylum 13 takes the full flavors of the Corojo leaf and blows proportions out of the water with a jaw breaking 6 x 80 vitola. A pound for pound steal, this cigar doles out notes of citrus, red pepper spice and buttered toast in a full-flavored, medium body. With a gorgeous Authentic Corojo wrapper grown on the Eiroa family farm, expect a pleasant 2-hour smoke from start to finish.

Also known as the Champagne, this exquisite cigar has been a crowning achievement, commemorating Perdomo’s first ten years in business. Now, several decades later, this cigar is still lauded by many, mostly because its blend and flavor profile appeals to a wide range of palates. While the inner core is crafted with bourbon barrel aged Nicaraguan leaf, it’s that shimmering outer Ecuadorian Connecticut wrapper that just begs you to pick it up, then cut, light and smoke. It’s an exceptionally creamy cigar featuring a mix of complex flavors like cedar, almond, cocoa, coffee and a wonderful underlying natural sweetness.

The Padron family created a veritable juggernaut when they unleashed the 1964 Anniversary Series. Taking home the trophy for Best Cigar Nicaragua for the third year in a row, this blend continues to reign as the crown jewel of Nicaragua’s tobacco industry. Released in 1994 to commemorate 30 years, this ultra-premium cigar exemplifies the decadence of Nicaraguan tobaccos in a full-bodied blend of 4-year aged tobaccos that teem with lush notes of earth, coffee, cedar, dried fruits and a delectably creamy profile that renders this cigar an unmistakable masterpiece. A pure treat-yourself cigar, the 1964 Anniversary Maduro is a top-shelf staple that’s earned its top spot on the backs of pure love and adoration from smokers and critics alike.

It’s no surprise that this modern classic cigar selection was given its due. At an average retail price somewhere in the neighborhood of $130 per box of 20 cigars, the Oliva Serie O more than lives up to its “Best Value” honors. The Torpedo is among the most outstanding for its full-flavored, all-Nicaraguan leaf character. This figurado offers exquisite handcraftsmanship, while the well-balanced smoke draws effortlessly with a rich and spicy brew of cedar, coffee, cashew, and just the right amount of sweetness. When it comes to getting a lot for your dollar from a super-premium cigar, the Oliva Serie O has few rivals.

A lot to talk about with Cornelius, but one word sums it up quickly…classic. And I mean that in both feel and flavor. The Cornelius & Anthony flagship cigar, it’s made at Little Havana’s famed El Titan de Bronze factory: their expert rollers have bunched smooth Nicaraguan and Dominican tobaccos, added an Ecuador Habano binder, then added another layer of that same oily Habano for the wrapper. Cornelius falls dead center of the scale for both strength and body – though the savory flavors get a boost of intensity toward the end, enough to call this Cornelius complex with a capital C. You’ll find sweetness (caramel, dried fruits, chocolate) balanced with spice, leather, coffee, wood…the list goes on. And that’s why Cornelius & Anthony now have added a Cigar Journal trophy on their bookshelf.

Now that you have some background on these award-winning smokes, we hope you’ll give them a try; and be sure to take a taste of the other sizes in the lines, as well. Look for a full recap of the 2018 Cigar Trophy Awards at the Cigar Journal website – and be sure to check us out in the next issue!

Wow, what a list. I have tried some on the list. Other than the Padron, I really enjoyed the Olivia and Kristoff represented here.

5 Things You Need To Know About… Whiskey And Cigars