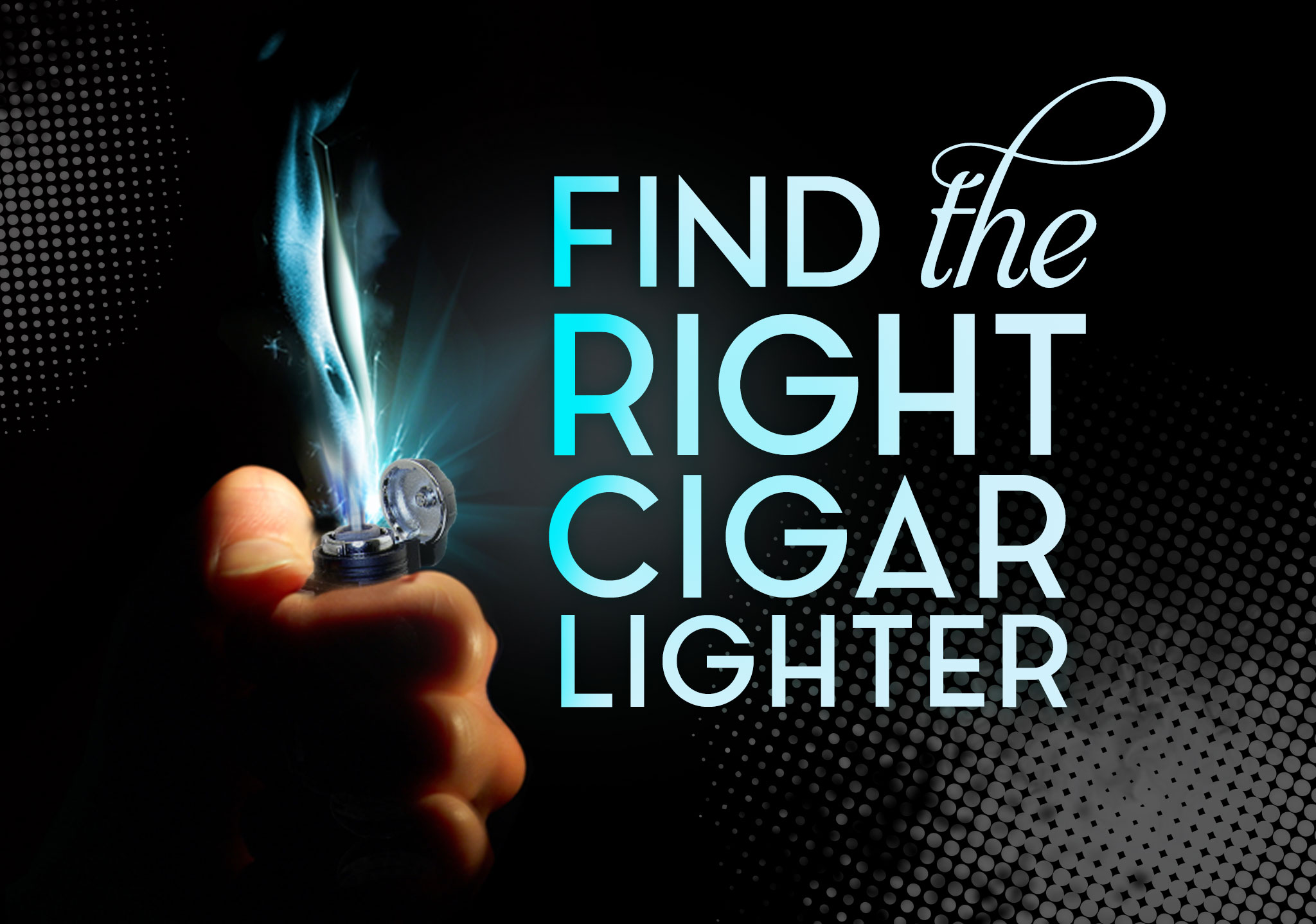 If “sometimes a cigar is just a cigar,” could the same be said for cigar lighters? Maybe, but like cigars, the tools for igniting them are almost as multitudinous as bird species. For the purposes of this post we’re going to focus on the most popular jet lighters used for lighting cigars, as well as how and when to use them. From single jet designs like the XiKAR EX Windproof lighter, to lighters with special tools, like the Vertigo Golf lighter with its built-in divot tool, to the Vertigo Intimidator with its four jets and futuristic design, there’s a torch lighter for every cigar lover.

Most cigar smokers prefer the torch, or jet-flame variety of cigar lighter for their ease of use, incredibly hot flame, and pinpoint accuracy for toasting cigars. Though single jet-flame lighters

like the S.T. Dupont Mini-Jet Lighter, can be quite costly, most of them are reasonably priced, and are often the first type of torch lighter a new cigar smoker will purchase. As they become more experienced, cigar smokers will add multi-jet lighters to their accessory stockpile, because they provide more fire power and efficiency. It usually has to do with the size and shape of the cigars they smoke. For example, it’s easier to light a 54-ring Toro with a dual or triple jet-flame than a single jet. Note also that lighters with two or more jets will consume fuel more quickly.

The most practical jet-flame lighter is the dual, or double jet. It provides plenty of flame for medium range ring cigars like a 38 ring Petite Corona or a 44 ring Lonsdale. A good example is the Blazer Venture. It’s very affordable and has a comfortable ergonomic design. A little farther up the pay scale you’ll find the XiKAR Enigma II. The Enigma II has a wider body, which

makes it a good fit for those with larger hands. Double jet lighters are also very effective on wider ring cigars like Churchills, but once you get into the 54 to 60-ring cigars a triple jet model like the XiKAR Trezo or Vector Vulcan may be more in order, since they cover even more surface area, making for faster toasting and lighting.

In recent years several manufacturers have released some extra-wide-ring cigars. The INCH by E.P. Carrillo “No.64” with its 64-ring is literally one inch in diameter, and it’s one of the smaller sizes. But wait…there’s more! Asylum Cigars’ “13,” “Corojo,” and “The Ogre” all have 80-ring whoppers in their respective editions. Getting used to having such a big fat cigar in your mouth aside, for cigars of this size you probably want to go with a 4 jet multi-flame like the Vector Viking, or the more streamlined Vertigo Churchill. And if that isn’t enough flame for your 70-ring 601 La Bomba “F-Bomb,” you can pick up a Vector Titan with five jets.

Let’s digress a moment and review the best way to use a torch-lighter, regardless of how many jets it has. Because these lighters are so bleeping hot you want to be very careful, especially when toasting your cigars. Holding any torch cigar lighter too close to the foot of your cigar can over toast it, resulting in too much carbonization and a bitter-tasting start. The more jets, the more heat your torch will put out. Holding the cigar in one hand, you want to holding the lighter in your other hand at least 6-inches from the foot and slowly move the lighter towards the cigar until you see it begin to toast, or blacken. Begin moving the lighter in little circles starting from the edge of the wrapper and move toward the center. You may also see little red spots where the tobacco has ignited. That’s OK, but try not to get the flame/s much closer. You want to caramelize the tobaccos first, not cremate them. The rest of the process you already know.

The more surface area at the foot of the cigar the more flame you need to toast and light it evenly. Though the heat from a single jet lighter is enough to toast cigars of any size, you want to be practical. Suffice it to say that, unless you have a lot of patience, it will take much longer to toast a 52 ring Torpedo with a single jet than a dual or triple jet. So, try to match the cigar lighter to the cigar.

When you buy a jet-flame cigar lighter you want to make sure it feels comfortable in your hand and that the ignition switch is easy to flip open or push. Some models are designed to flip open automatically when the switch is depressed. Another good feature to look for is a fuel window. Not knowing how much butane is left in your lighter is sort of like a bizarro version of Russian Roulette; in this case the gun doesn’t fire.

Many jet-flame models come with built-in accessories like the Blazer EVO, a compact little twin-jet lighter that has its own punch cutter. Moreover, if a punch cutter is your cutter of choice, you may want something like the single jet XiKAR Versa, which has two punch cutters; one for smaller cigars and one for larger cigars.

If you’re already happy with your pocket lighter but want something for your home smoking space, you should purchase a tabletop lighter, like the triple-jet XiKAR Allume Stealth. Though they can have up to as many as 5 jets, the main advantage is that tabletop lighters hold a lot more fuel, have plenty of firepower, and are ideal for situations when you’re smoking cigars with several friends.

You won’t find anything in the rulebook of cigar etiquette that specifically tells you what cigar lighter to use for a given cigar. (Besides, I’ve never seen a rulebook on cigar etiquette.) The important thing is, whichever jet-flame lighter you buy, make sure it’s the right tool for the right job.

Reading Time: 6 minutes No matter what size cigar you’re enjoying right now, it probably started its life as a Corona. Check out some brief history on what makes this classic size so important – plus our list of the Top 10 Coronas you can get for less than 10 bucks!

Get The Most Bang For Your Buck When Buying Cigars