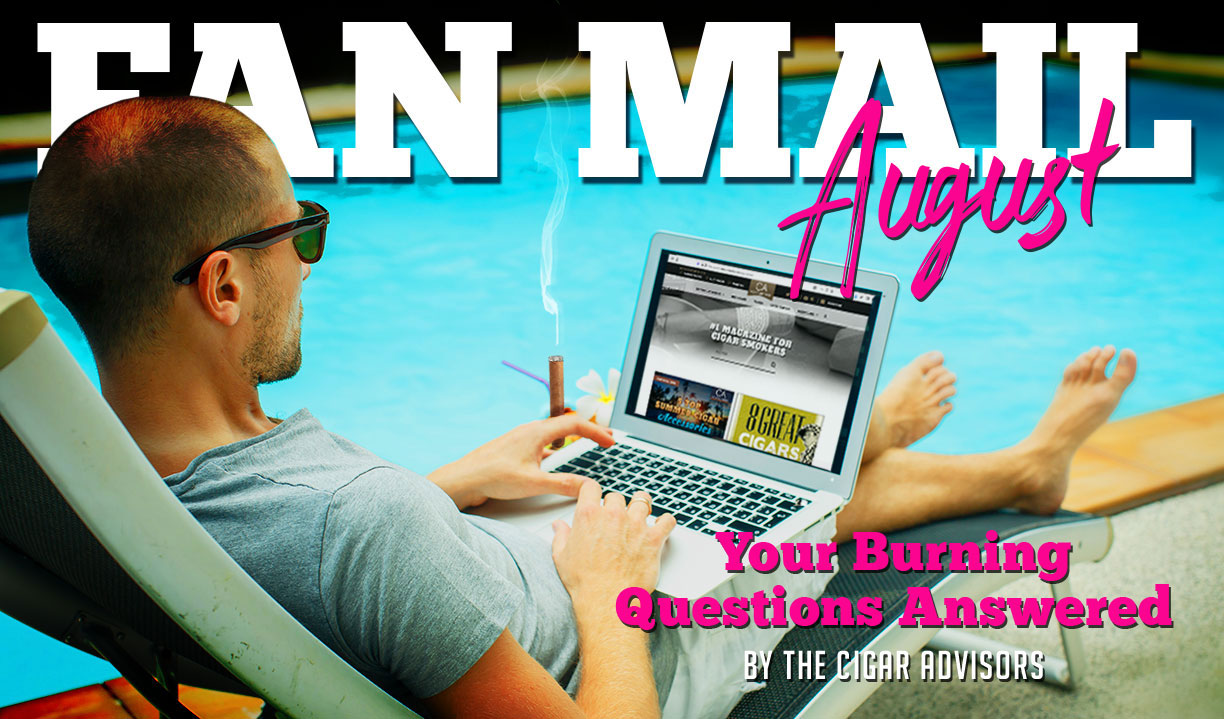 Three Qs, three As. With Video.

We’re back to the mailbag for more Cigar 101…

After 36 episodes, it must be pretty clear by now that we love talking cigars…and while we’re endowed with a collective gift of gab, we’re not always blessed with the answers – so when readers ask us cigar questions or comment on our Cigar Advisor articles, we’ll reply. And if we don’t know, we’ll do our best to dig up the info for you. Because we believe that the more we all know about cigars, the more we all enjoy smoking them.

This month’s most intriguing Q&A topics: we’re talking about an unconventional cigar cutting method, trying to identify what cigar “complexity” means, and figuring out the ingredients of the glue cigar rollers use. And with answers in hand, we’ve shot some quick videos that have some useful info and helpful ideas.

Do you have a cigar question we haven’t answered yet? Hit us up on Facebook, Twitter, Instagram, YouTube or email and ask – or leave a comment below. And if one of our video answers has helped unravel a cigar mystery for you, we’d love a like on that video – and by all means share it, too. Knowledge is power, after all. And don’t forget to subscribe to our Cigar Advisor YouTube channel so you won’t miss what we put out next!

Check out these videos…

Cigar Question #1: What does it mean when a cigar is “complex?”

I received a question the other day from Scott in Edison, New Jersey. He asked, “I keep seeing all these reviews talking about cigars being complex, even from you guys. What does that mean and why is it important?” Scott, this is one of my favorite Fan Mail questions in a long time. Complexity is often talked about in cigar circles as an ‘is or isn’t,’ and that can be confusing to new smokers who have no idea what we’re talking about. Simply put, a complex cigar typically means that it has several individual flavors that can be identified in its smoke. However, complexity can mean different things to different people. Check out the video and we’ll go over two of the most often-used cigar complexity definitions, and what they’ll tell you about a cigar.

Cigar Question #2: Can you cut a cigar with the cello on?

Jesse in Wisconsin wrote asking if cutting a cigar’s cap through the cello results in a cleaner cut. It may seem a little unusual – and it is – but I gave it a try to see if there was a difference in the quality of the cut. Watch now, and see for yourself.

Cigar Question #3: What is cigar rolling glue made from?

It’s Ed in Binghamton, New York who wanted to know, “What’s in that glue that cigar rollers use to make a cigar?” And even though I thought I knew, I found out some interesting answers from research – and from a quick chat with Nick Perdomo – that showed me the three primary types of cigar glue: Bermocoll, pectin and gum arabic.

Cigar glue is an essential ingredient to the cigar making process. It’s natural, 100% food safe, odorless, and shouldn’t affect the taste of the cigar. But this is a good question for those of us who closely watch what we eat and drink – because it’s worth knowing more about what you’re smoking, too. Watch now!