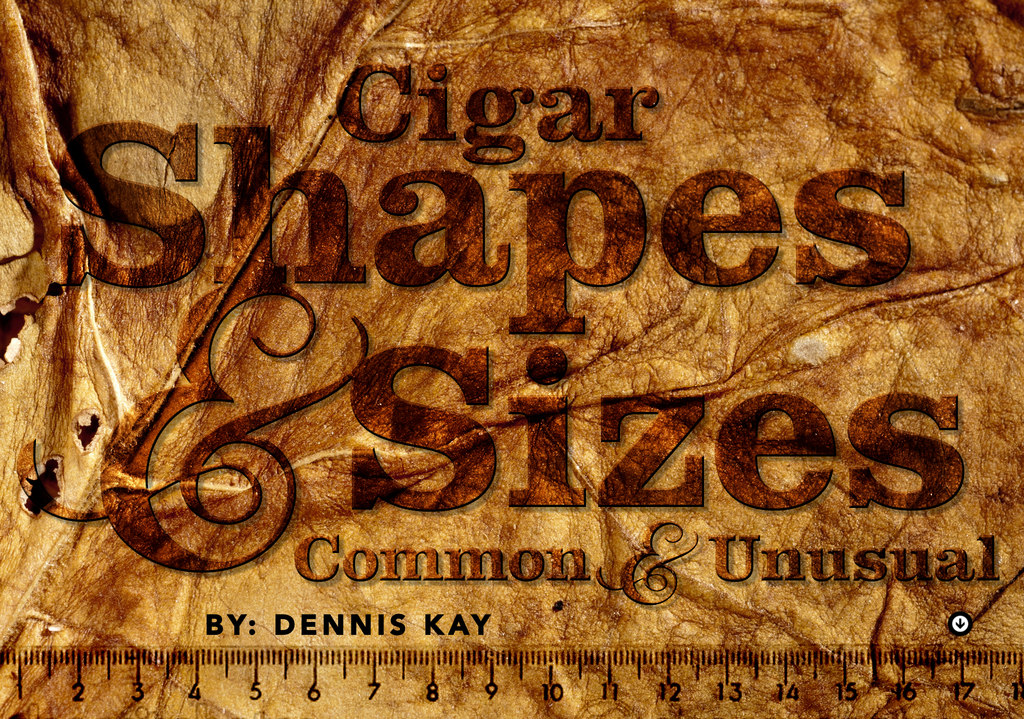 Cigar Shapes: All you need to know

There’s something beautiful about the rolling of a premium cigar. Many consider it an art form-it is, after all, made completely by hand. The way a torcedor works the filler tobaccos gently yet firmly into the binder, held in check by the rigid confines of the wrapper leaf…is not unlike a watercolor artist who lets his tones wash together subtly, all the while held within the confines of bold, strong strokes of dark color on the boundaries of his piece.

And just as there are different genres in art, the untrained eye can easily spot the major differences between them. So it goes with the art of rolling cigars; anyone who is new to the hobby quickly eyes the fact that they come in a variety of shapes and sizes. Identifying and categorizing them can quickly become very confusing, but you don’t have to have an art purist’s eye to do it…it’s actually pretty simple once you dig in.

The very first thing you should know is that there are two main categories of cigars: Parejos and Figurados.

Parejos are simply straight-sided cigars; most cigars you see are parejos, regardless of their size. Their heads (where the smoke is drawn from) are typically rounded, although they may also be slightly flat.

Figurados are “shaped,” or “fancy” cigars of varying shapes and sizes. A Perfecto, for example, is a figurado which is wider in the middle and tapers at the ends. A more common figurado is the Torpedo, which has straight sides, but a long, tapered head.

Cigars are measured according to their length and ring gauge (diameter). In the US, customary units are used, meaning length is given in inches, and ring gauge is given in 64ths of an inch, and 1/64″ happens to be the thickness of the average tobacco leaf. So for example, let’s say you see a cigar which has a 52-ring gauge. That means that it measures 52/64 of an inch in diameter.

In most other countries, millimeters are used, although confusingly, ring gauge is still usually specified in 64ths of an inch. For our purposes, we’ll stick to using customary units.

[BEGINNER’S NOTE: Avoid the mistake of thinking there is a direct relationship between size and strength. Even so, your first cigars should probably not be huge; even if it is relatively mild, you still might find the experience overwhelming (and too long!).]

While cigars may be known by various factory names according to their size, those names–called vitolas de galera–are rarely used by anyone other than the manufacturers (and geeks–the official Cuban cigars size chart has over 100 distinct entries!).

Regular aficionados prefer instead to use common names. Examples of such shapes include Parejos like the Corona (5.25-5.75″ x 40-44), Robusto (4.5 – 5.5″ x 48-54), Lonsdale (6.5-7.5″ x 40-44), and Churchill (6.75-7.75″ x 46-48), and Figurados like the Pyramid (any length, 36 – 54). You will notice that I used ranges, as there is some variation among manufacturers. Furthermore, manufacturers will sometimes designate cigars by a name that does not conform to accepted conventions. Still, it should help you to understand at a glance what you’re looking at when you see a given size name. Above all, remember that cigars for sale are typically listed with their exact dimensions, so you can reference that before buying.

Some cigar sizes are more or less specific to the US, such as the Toro (6-6.5″ x 48-50; Cubans would call it Robusto Extra). As time has progressed, more and more variety has been introduced into the cigar market in terms of shapes and sizes. In the last decade or so, there has been a trend toward thicker cigars, with 60 or 64 ring gauge jawbreakers becoming quite common!

Perhaps the most unique and recognizable cigar is the Culebra, which translates to “snake.” Culebras have been in existence since the 1800s and are very distinctive because they are made up of three intertwined Panatelas (a long, slender size of cigar). The Panatelas must be interwoven while they are moist enough to be pliable; in this way, they do not break, and once dry, hold together nicely. Generally they are tied at the ends with twine or ribbon.

Some have argued that Culebras were invented by cigar rollers who wished to smoke on the job. According to this theory, because of their peculiar shape, Culebras would not sell; this led the manufacturers to cut their losses by allowing the rollers to smoke them.

Another theory is that they were developed as a marketing tactic. They do in fact make a great conversation piece, and you can split them apart and share them with friends.

But the likeliest theory explanation is that it was a way for manufacturers to ration tobacco to the cigar rollers. Since Culebras weren’t sold commercially, a factory manager who saw a roller smoking anything other than a Culebra would know that the roller had taken the cigar from the company’s inventory.

Beyond Culebras, cigars have been created in an endless number of novelty shapes, from tobacco pipes to saxophones to baseball bats and beyond.

Some of the most unique shapes are made by Arturo Fuente. The JRW Opus X Football, for example, is a very short, thick cigar which tapers at the ends and really does look like a football. The Opus X Python mimics the snake, mid-digestion, with a wider diameter along one specific area of its midsection.

Fuente also crafted the famous Hemingway cigar series, although the familiar “Hemingway” shape, featuring a Perfecto foot and tapered head, dates back to the 1920s. While its popularity declined with time, the Hemingway line has made it fashionable again.

But uncommon cigars go beyond shape. Let us also consider size: Guinness World Records lists the world’s longest cigar at 268 feet in length. It was rolled by Jose Castelar Cairo in Havana, Cuba.

The largest cigar in the world overall is the Gran Habano #5 El Gigante. The cigar measures 19 feet in length by 3 feet in diameter and weighs a staggering 1,600 pounds! 16,000 wrapper leaves form the outermost layer of the cigar, which has been used in protests against cigar restrictions.

If you have some extra change, it can be yours for the bargain price of $200,000 (hey…at least it includes free shipping!).

A wealth management professional by day, Denis Kay has been blogging at CigarInspector.com in his spare hours since 2007. Since then, Cigar Inspector has become one of the major cigar-related online publications with multiple authors from all around the world." "

Reading Time: 4 minutes Have you developed a taste for infused and flavored cigars? We’ve picked five new cigars that bring a little extra flavor to the table – and if it’s a coffee fix you’re after, we have details on a bunch of must-try smokes. See our list now…