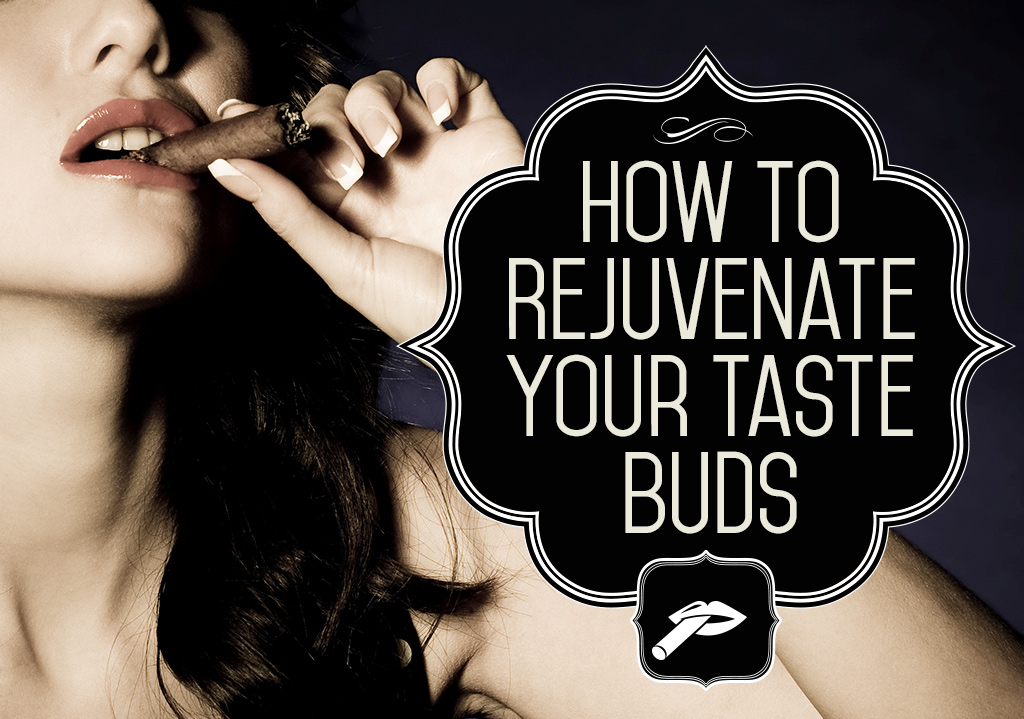 Cigar Tasting: How to Rejuvenate Your Taste Buds

Let’s be honest: is it really possible to have “too much of a good thing?” I’d argue “no”, simply because “too much” and “good thing” are so wildly subjective. Besides – you only go around this Big Dance once, might as well make it count. But when it comes to cigars, it’s possible that maybe you’re not enjoying them as much as you used to, or could, simply because you’re not getting the most out of them when it comes to taste. And that means it’s time to jump-start the taste buds to get more flavor out of your smokes.

If you’re newer to cigars, and you’re taking the time to enjoy more than one or two in a day, you’re starting to notice a couple of things now that you light up more often:

If that sounds like you, then it’s time to start working in a palate cleansing to your smoking regimen. Now, there are plenty of reasons why two identical cigars from the same box will taste different: construction, the condition of the cigar, where or how you stored it…the list is lengthy. But rejuvenating your senses is an exercise worth exploring, if you really want to try to savor those flavors coming from your Perdomo Champagnes.

This is especially worth thinking about if you plan to enjoy more than one cigar in a sitting (and especially if you’re at a cigar tasting). How do you cleanse your palate? Before you say, “another cigar,” think about it from outside the tobacco perspective: that heap of pickled ginger (“gari”) on the side of your sushi plate is for settling the ‘buds between pieces of fish; wine tastings will offer crackers, bread or cheese. This is to neutralize the tastes from the previous thing you ate or drank (and in our case, smoked) before you try something different, so you don’t confuse the flavors with the other tastes in your mouth. So you’re not just cleaning the palate, you’re refreshing it – zeroing it out, actually. That’s because taste buds operate like any other sensor…they only register the data if they’re clean. With that in mind, let’s defer to you long-time smokers have tried and true methods for hitting the reset button on your taste buds…there is a wealth of suggestions:

Friend of the Show and occasional Advisor contributor Rev. Bob Meyn says his favorite palate cleanser is “a weak cocktail of Maker’s Mark with a twist of lime and a splash of water. The ethanol, water and citric acid from the lime clear the gustatory deck of any lingering flavors on my tongue prior to lighting up my stick du jour.” And that’s the key: think of anything with an acidic content that isn’t overly flavorful (defeating the purpose), and drinking it will help break down and remove any of the leftover flavors (they’re alkaline, fyi) from that last smoke. Done with your Flor de las Antillas flavor bomb? Belly up to the bar and grab a soda. It ain’t glamorous, but it works. You could also wet your beak with a glass of water with lemon, or apple juice. Even tonic water or seltzer will do the job, as will club soda – with or without a splash of lime juice. Your call: the lime is acidic but sweet, and may affect the taste of your next cigar. Recognize that these are not necessarily beverages that you would drink with your cigar – pairings are a completely different animal because those flavors complement the flavor of the cigar and enhance the smoking experience. So as palate cleansers, pairing drinks are typically pretty lousy, especially between cigars.

With either of these edible solutions, it’s all about balancing the acidity of the food or drink with the alkaline nature of the tobacco smoke and bringing the palate back to a neutral state. That clears away any residue from your taste buds that may be hindering their function, but without leaving behind any lasting flavors that might cover up the “honest” flavor of your next cigar. Many of our fellow smokers report that a few handfuls of almonds or pistachios help to wash down the lingering essences of Nicaraguan tobaccos in your Acid Blondie. Or, we could take a page from the fancy-shmancy dining scene and try a sorbet, like they serve between courses to refresh the tasting mechanism. I’ve seen a few recommendations for mild cheese, which I’ve tried (it works pretty well) – or to eat a square of dark chocolate. Mixed reviews on the chocolate, though…I’ve found it to be a better complement to smoking. But as with all things cigars, to each his own; it might do the job for you.

I know, I know…I’m breaking many rules here. But the truth is, no matter how much you may miss smoking your cigars, it may be worth it to step away from the humidor for a couple of days. Removing your smoky indulgences from the equation for a weekend might be just long enough to regain your sensitivities to that velvety La Gloria Serie N power and complexity.

When it’s time to get back on the horse, here are a couple things to think about before you light back up:

What’s not to be overlooked when cleaning out the faculties is your sense of smell. A couple of years ago, my wife dragged me to the “Scenter of the Universe” – the Yankee Candle megastore, where they had every single one of their 2,838 candles open for sniffing. But about every tenth jar stood an open container of coffee beans; this was to refresh your olfactory senses as you sniffed your way from “Cotton Sheets” to “Himalayan Pine Tree” to “Old Leather Wallet” or whatever they had on display. Inhaling the coffee beans’ aroma basically neutralized the sense of smell so that we were ready for the next sampler, and overcame what’s called “olfactory fatigue.” It’s the same thing when you walk into a steak house…you usually drool uncontrollably the minute you walk through the door because of the aroma, but after inhaling grill-cooked awesomeness for 15 minutes, it doesn’t have quite the same hold over you. You kind of get used to it – and it’s the same for cigars, as your palate so strongly relies on your sniffing senses. Stick “retrohale” in the search box over there, and you’ll see what I mean.

Again, everyone is different…and what works for him may not work for you, but it’s worth a shot. There are always other factors that can, and will, affect your taste of a cigar – but an easy start is to avoid palate burnout. You’ll not only smoke your cigars better, you’ll get more out of the experience. Got another suggestion for a clean-as-a-whistle set of taste buds? Comment here…

[…] post Cigar Tasting: How to Rejuvenate Your Taste Buds appeared first on Cigar […]