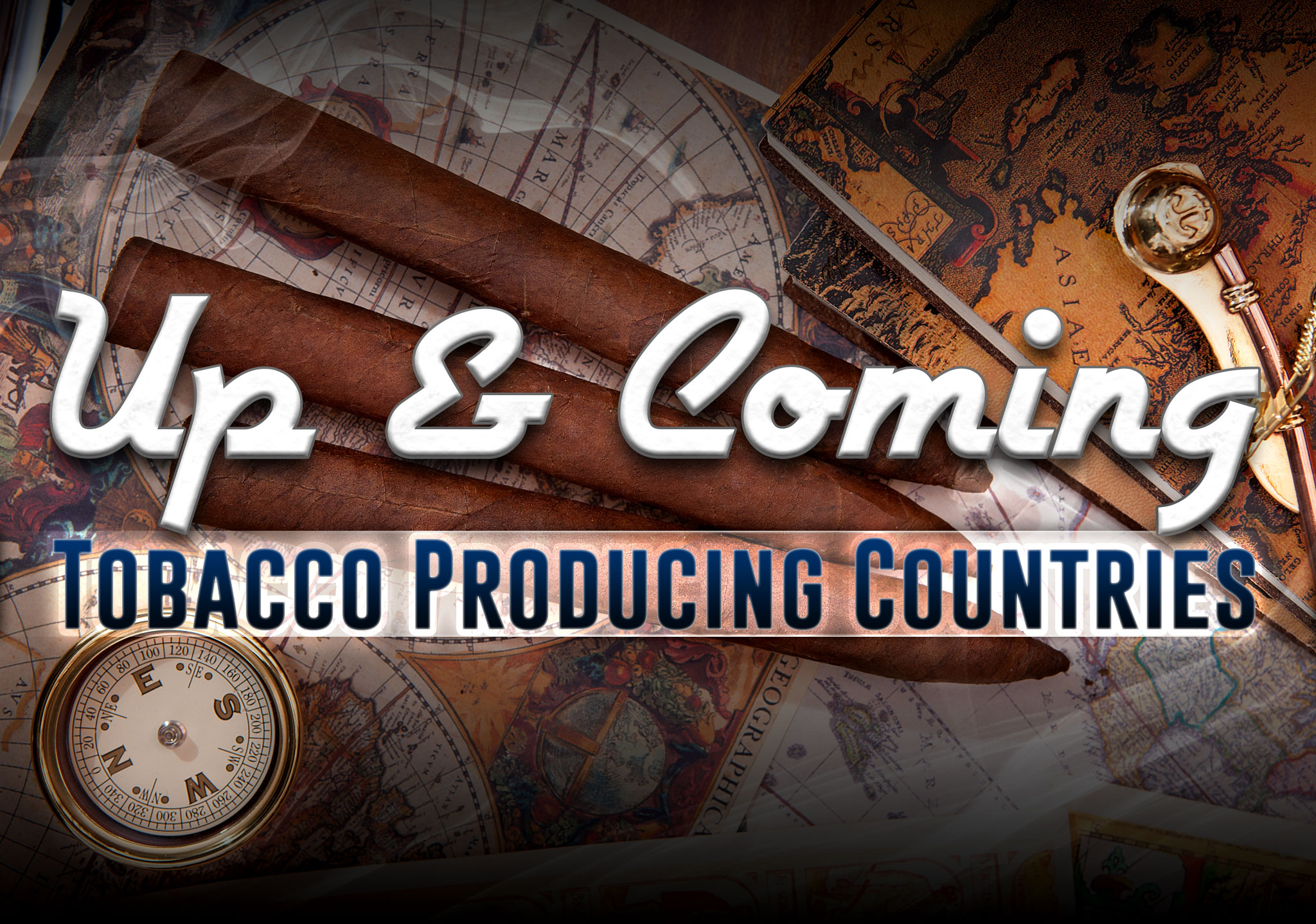 Up and Coming Cigar Tobacco Countries

Up and Coming Cigar Tobacco Countries

Nicaragua, Honduras, and the Dominican Republic are the three main tobacco producing nations for cigars branded on every U.S. stogie kook’s mind. Add Cuba if you like, but the gumment says their dirty Commie tobacco will turn you redder than a pomegranate and high fivin’ Kim “Chub” Un in no time. How this happens is past my grasp, but I have a feeling government pouting and foot stomping has led us down a path of continued “tough cookies” trade restrictions that are complete bullshit. But pushing aside my grand political diatribe that is boiling hotter than the crock pot I accidentally left sitting on full blast all day at my brother’s house (happy housewarming, I guess), the reason we really recognize these nations is simple: they are the three big tobacco producers that make up about 99% of all cigars that are imported State side.

Think about it. Name your favorite cigar and chances are it has a majority of tobacco from one of these nations. It’s just a fact of life for American cigar smokers. I say American because the rest of the world has a nasty habit of either smoking all Cubans or making their own domestic cigars to supplement their own nation’s stogie imports. Well I’m here with my slingshot, ready to peg these three Goliaths right between their big ol’ eye melons. It’s time to give the up-and-comers a shot at this smoky bliss we love so much so we can experience the new regional flavors of untraditional tobacco producing nations. I can’t explain how tobacco grown in unconventional locations drastically alters the taste in short simple terms without writing a whole new article about it, but the super simple explanation, as Jesse Pinkman says, is “Yeah! Science, bitch!

Vanna, show our guests the cigars!

I was pretty surprised myself when I saw a cigar with Peruvian tobacco, but low and behold, stogies like La Libertad and Saint Luis Rey sport Peruvian tobaccos that are just killer.  Let me tell you, the wrapper alone makes me want to scream “LIBERTAD!” like the guys in Little Havana before Ribenga gets shived in Scarface. Known more for their super comfy Alpaca sweaters, their tobacco is al-pack-ad with serious flavor. It’s ultra complex with a slight spice that is never overpowering. It’s a truly remarkable tobacco, especially the Habano leaf that is featured in the La Libertad. This is a fairly undiscovered hideaway as of right now, with only a few big dogs utilizing their tobaccos. I would be shocked to find in ten years time this is still rarely used.

Whenever they aren’t in horrific political and terroristic turmoil, which unfortunately these days seems never-ending, the people of Syria who are trying to make an honest living for themselves to live peacefully and prosperously are cultivating their new cash crop: tobacco. It’s rather interesting that a Middle Eastern nation is growing tobacco, but let’s check the Geography. Syria is barely in the Middle East and boarders Turkey, which lies to the north and grows highly regarded pipe tobacco. So the Syrian people decided to capitalize on their ideal soil and temperate climate to the north near the Mediterranean to grow cigar tobacco. It’s rather similar to the Turkish pipe tobacco which is extremely smooth and flavorful, but don’t expect to see any Syrian cigars for another few years. They need to perfect the process of rolling and blending and decrease political tensions before we can start enjoying this new region of tobacco. Plus, if you’re a snob, it’s kind of fun to say you’re smoking Mediterranean tobacco.

This firecracker of a nation has a passionate and hard working population. And with that blood and sweat comes some pretty tasty, yet heavy tobacco which is featured in cigars like the Rocky Patel Cuban Blend. Back to the Geography lesson: Costa Rica is directly south of Nicaragua in Central America. That means it’s that much closer to the Equator (and Ecuador, as it turns out!), which makes the region naturally hotter. The added heat and prolonged sun exposure makes the tobacco darker, thicker, and in most cases, stronger. At the end of the day, you have a hefty tobacco leaf that tastes like a mix between spicy Nicaragua, and nutty/toasty Brazil tobaccos.

Yeah, I know. We’ve seen tons of cigars from Brazil before. So why are they on the list when it seems like there’re already a brazillion tobacco fields there already? Brazil is expanding even further with the variety of tobacco they typically grow. Cigars like the CAO Brazilia and Romeo y Julieta House of Montague sport the usually Mata Fina and Arapiraca wrappers respectively. But in the recent year or so, they’ve expanded into producing more leaves like a true Maduro and Habano. The most notable example is the wrapper on the San Lotano Habano. It combines the typical flavors of the tobacco type, but the climate and nutrients in the soil give it a heartier and very well rounded smooth taste. The explosion of new tobacco types coming out of Brazil will be something special to look out for. Anything new from this nation will be an all-star.

Of course my biggest write up is going to be for the biggest country on my list. Growing cigar tobacco is becoming as American again as frying Twinkies, driving rat rods, and pumpkin chunking. Before you ask, all of those things are in fact purely American stereotypes. I’m pretty sure if you take every stereotype America has and try to find the State that embodies all of them, Tennessee is pretty much it. And that’s not a bad thing.

Anyway, the United States has been growing some serious tobacco lately, and not just Connecticut and Connecticut Broadleaf Maduro. Our home state of Pennsylvania alone is providing tobacco for an exponentially growing number of manufacturers, and Gran Habano went as far as to make the first American Puro cigar in a long time. That means all American tobaccos for a smoke that is just unreal. Other cigars like the Kentucky Fire Cured uses hickory fire cured tobacco from Kentucky and Tennessee in their blend for a real smoky flavor. I wouldn’t be surprised if more and more manufacturers use the United States to grow in different regions to draw out different flavors. We have a lot of land and have always been a farming nation. Expect to see more from the U.S. in the near future.

Every nation listed is going through a tobacco boom right now, producing more of the green-y goods to roll premium cigars. It will be hard to find some of these tobaccos as of now, but in the next decade or so, you may find these nations to be mainstays in the blend info on a number of cigars. I’ll even go as far as to say we’ll even start seeing Cuban tobacco make appearances in the American cigar market in that time frame as well, by way of classic Cuban cigar brands as well as new blends mixing tobaccos from multiple nations with it. By then, the communism should all be out of the tobaccos. In any case, keep an eye out for these incredible tobaccos, and stay smoky.

Reading Time: 8 minutes We are insanely passionate about our coffee; we’re the same way with cigars. And when you pair the two, magical things happen on the palate and in the olfactory senses. Learn why cigars go great with this beloved brew, plus our Top 10 great cigars to pair with it.