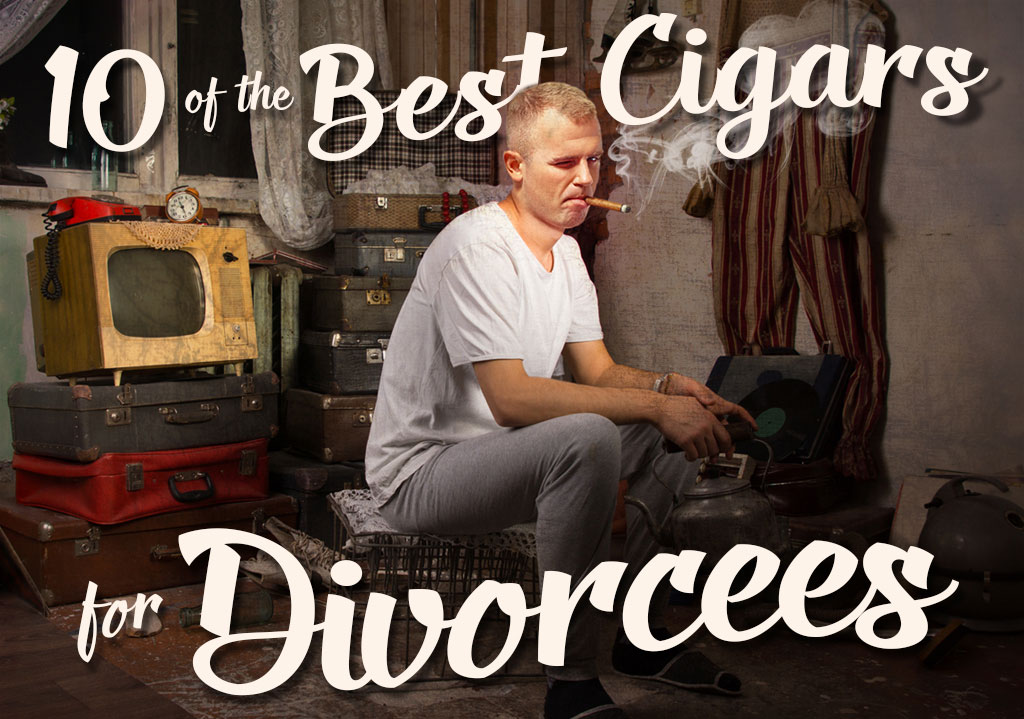 Sorry to hear you’re getting divorced. Have a cigar!

Let’s face it, divorce sucks. The question is, is it reason to celebrate with a fine cigar? The subject is certainly debatable. And if you’ve been through a divorce, depending how things worked out for you, you may have reason to feel such revelry would be in poor taste – or maybe not.

Having gone through the emotional gauntlet of divorce, myself, more than eight years ago, at the time, lighting up a fine cigar didn’t always satisfy me in the same way it did prior to the collapse of my marriage. I also came to understand why some have compared divorce to the “5 Stages of Death.” And in a way, it is like a death in the family since you’ve lost someone you once truly loved.

The 5 Stages of Divorce

Denial – The partner left behind is unable to admit that the relationship is over; therefore, he or she may continue to seek the former partner’s attention.

Anger – The partner left behind may blame the departing partner (him or herself).

Bargaining – The partner left behind may plead with a departing partner that whatever provoked the breakup will not be repeated. For example: “I can change. Please give me another chance.” Alternately, he or she may attempt to renegotiate the terms of the relationship.

Depression – The partner left behind may feel demoralized that his or her bargaining plea did not convince the former partner to stay.

Acceptance – The partner finally abandons all efforts toward renewal of the relationship. In other words: It’s over – move on with your life.

It’s been said that about 45 to 50% of all marriages in America end in divorce. However, a recent study of divorce rates, shows that the figures are significantly lower. Moreover, the American divorce rate, which began to peak during the 1970s, has actually been declining since the early 1980s. And here’s some good news for newlyweds: Should the rate of decline continue, only about one-third of American marriages will end in divorce.

Whether it’s from personal experience, or family and friends that have broken up, most marriages don’t end happily. But if we’re being honest, some newly-parted husbands and wives have good reason for celebrating divorce. It’s not as if a split is as taboo as it was back in my grandparents’ and parents’ day. My parents were married up until the time my mother passed away several year ago – over 50 years. I wasn’t as lucky, but fortunately, my ex and I managed to split on civil terms.

So, whichever stage of divorce you’re either in currently, or have already experienced, here are 9 scenarios where the following 10 cigars would most likely be appropriate:

One of the worst parts about cheating is that gut-wrenching cyclone of emotions when you find out what your partner’s been doing behind your back. Now THAT’S what you call a sucker punch! And, if you ever run into the bastard, the thought of smashing his face may come to mind. That’s where the Punch Sucker Punch Smash Face comes in. But all things considered, you may be better-off defusing some of that anger with this full-bodied big boy that offers notes of leather, cocoa, and cedar. Be sure you pair it with a good single malt scotch – and better make it a double.

The bickering has become nonstop, the animosity mounts, and next thing you know, the in-laws are in the middle of the fracas. Your mother says, “I never liked her from the start. Besides, she dressed like a whore.” While your father-in-law is telling your spouse, “I told you that guy was a bum. He couldn’t rub two nickels together.”

So, take your pick. It’s either the medium-bodied Romeo Capulet Toro with its sweet ‘n spicy character, or the dark, creamy Romeo Montague Toro with its chocolatey, nutty, and coffee flavor profile.

It’s another call from your lawyer. Now she wants the condo in Boca Raton and the Volvo C70 convertible. At this point, you’ve already given up the house with all the furnishings, including the home theatre system, and the signed Andy Warhol lithographs. You’re almost ready to put a gun to your head. However, a much better idea would be to smoke an Asylum Lobotomy Double Toro. You wonder if maybe you should’ve had a real lobotomy before you decided to marry her, but this super-sized primo with its dark, savory Habano wrapper will allow you to relax and consider your options for a couple of hours.

You move out of your house and in with your best friend. You overhear his wife ask him when you’re going to be getting the hell out of her house, and two weeks later, it’s on to your cousin Ronnie’s. That lasts about a month. Next, you find a modest apartment situated about 10 yards from some railroad tracks, but eventually you come up short on the rent. You try living out of your car for a while, but the fast-food containers keep piling-up. Desperate for shelter, you end-up living in your parents’ basement. This situation definitely calls for a Nomad DR Classic Rambler. Medium in body, this creamy, complex mix of earth, wood, and spice helps you deal with it in the best way possible.

You’ve signed the divorce papers – and that fat check for your lawyer – when a sudden feeling of freedom comes over you. You may also be feeling a little bit poorer. In that case, you light a Rocky Patel Freedom Torpedo. This big, full-flavored cigar comes at a nice price while issuing a sweet, nutty-tasting smoke with notes of espresso in the mix.

You’re officially an “S” again, so you stock-up on condoms and open a Tinder account. You’re now meeting all sorts of women, and but for a few exceptions, you realize most of them are even wackier than your ex. No worries. You fire-up a Deadwood Yummy Bitches Sweet Jane. Petite and naturally sweet due to the special curing process used for the dark maduro wrappers, in some ways you find it a lot more satisfying. (You might want to try the other two Yummy Bitches, “Fat Bottom Betty,” and “Crazy Alice,” since chances are you’ll run into some version of these ladies along the hook-up highway.)

You look at the date on your phone and notice that today would have been you and your ex’s wedding anniversary. At first, you’re peeved. Bitterness pervades your thought process. So, you take the edge off by thinking about the good times you had together and light-up a Perdomo 20th Anniversary Sun Grown Epicure. Aged for a minimum of 6 years and fermented an additional 14 months in bourbon barrels, you realize that this smooth, creamy, full-flavored puro is never going to let you down.

You’re finally in a relationship that’s lasted longer than a 3-day holiday weekend. You begin spending more quality time together. She’s texting little emoji-filled love notes to you. It’s all so . . . blissful. What better way to savor that new romance than with an Avo XO Intermezzo (X-O, get it?). This luscious, medium-bodied beauty is ultra-creamy and brimming with notes of sweet cedar, dark roast coffee, nutmeg and roasted nuts. Like your new love, it always brings a smile to your face.

Every new beginning comes from some other beginning’s end
– Semisonic

Time has finally shaken the dust off your coat, cleared the blur from your eyes, and broken the chains of support as you slip that last alimony check into the mailbox. It’s the next best thing to burning the mortgage, and it calls for a celebration. So, you take out that Padrón 1926 80 Years you’ve been saving for this moment. Blended with Padrón’s rarest vintage tobaccos encased in a lusciously oily maduro wrapper rolled by only one torcedor, this earthy, chocolatey, and spicy delight is the perfect finale to this unpredictable drama we call “Life.”

Can you think of any cigars that would be appropriate for coping with or celebrating divorce? Please leave a comment.

Man, you guys will say anything to sell some cigars, oy!

THAT WAS A FUN READ!!

I must share this with a few of my non-smoking divorced friends.

I’m gonna assume, Gary, you made it to the Padron. I feel yer pain, brother. Glad you survived!

How about a bundle of Diesel Unlimited 2nds. After she has taken you to the cleaners, it may be all you can afford! The good news is, you can’t tell the difference between these & their 1st run brethren! At less that half the price.

You gotta throw in free shipping(no minimum) in there to ease the pain..lol

I’ve been divorced twice (so far), and if someone brought me a cigar to help ease the pain, they would be my newest and bestest buddy!

most of those isticks listed are dog rockets !! im sticking to 10 yr old fuentes and padrons with some 15yr old cubans ! divorce sucks

I’m not so sure TORPEDOS should be included. The last thing I’d want to do is lose something else!!!

I am thinking a Diamond Crown Maduro you be a perfect way to start your new free life!!

Make it quick and fast , then enjoy a AF ” SHORT STORY “

So funny. I’ve celebrated the anniversary of my divorce with a Padrón 1926 80th for the last 2 years! Natty though, not maduro.

Cohiba Macassar! shine your hair with those macassar oil with a lit of Cohiba’s finest! On to the next one~! lol

Reading Time: 3 minutes Looking for a new smoke to rid you of the winter slump? Top New Cigars has them all – click here to check them out now!