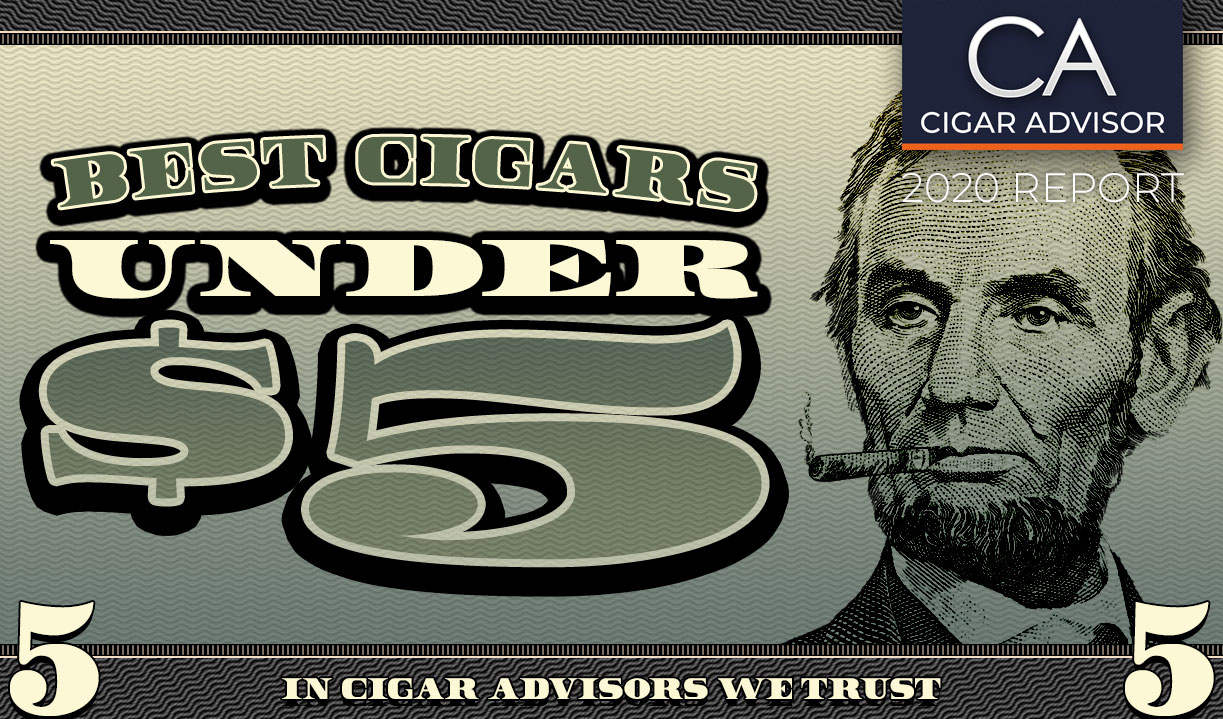 The Best Cigars Under $5 You Can Smoke

So, all you’ve got is 5 bucks…and you want change?

I’m up for the challenge.

As we’ve made occasional updates to this guide, we’ve seen many sub-$5 cigars come and go. Much of that has to do with prices. They just always, you know…go up. But aside from inflation, there are some new players on the field we feel are just as buzzworthy, if not more.

Economical cigars are often overlooked because of their price point, and that’s because there’s confusion between price and quality. Namely, they’re often used interchangeably. Let’s get something out of your head right now. Cheap does not equal bad. Expensive does not equal good. Throughout my career in the cigar industry, I’ve smoked plenty of awful cigars of every price range. The good news, I’ve smoked amazing cigars in every range, too. The amazing stuff is what I’m bringing you today.

In this guide, I’m highlighting 10 of the best cigars that fall under $5.00. They are based on box prices and are accurate as of press date (April 2020). In the interest of full disclosure, some of them may climb slightly above the $5 mark if purchased as singles or 5-packs. No worries. Deals this good were made to be grabbed by the box anyway!

As always, if you’ve got some noteworthy cheapies in your stash for daily smoking, let us know about it in the comments below.

They say only Fuente is Fuente – and leave it to them to produce a value smoke wrapped in genuine African Cameroon. That, in tandem with a Dominican core, makes for a creamy cigar with notes of oak, cedar, bread, caramel, and leather. Don’t ever let ‘em tell you that mellow cigars can’t be rich in flavor – if they do, give ‘em one of these and watch them change their tune.

If you’re enjoying a cigar with great flavor, tip your hat to the La Gloria Cubana Wavell for its part sparking the ‘90s cigar renaissance. It was affordable and tasty then, and not a damn thing has changed! Dressed in an Ecuador Sumatra wrapper with fillers from the Dominican Republic and Nicaragua, Wavell releases swaths of cedar, sweet spices, and light peppers. It’s the smoke that started it all.

If you smoked a Charter Oak Rothschild before you knew the price, you’d probably guess that it costs at least twice as much – I know I did. This Foundation Cigar Co. gem has balanced flavors of salt, nuts, wood, and peppers. That’s because Nick Melillo insisted the blend use an authentic U.S. Connecticut wrapper above hand-selected fillers from Nicaragua. Forget everything you knew about Connecticut cigars. This is the new breed.

High cigar prices are enough to drive anyone insane. Asylum’s got a prescription for bargain-priced flavor – Lobotomy Corojo! It’s got an authentic Honduran-grown Corojo wrapper, an all-Nicaraguan core, and smokes with essences of wood, black pepper, and a buttery sweetness throughout. Old-school Corojo flavor has made a comeback, and this is an affordable way to experience it.

Project 40 was one of our favorite cigars of 2019. We loved it so much, it made our top 25 cigars list. No small feat. But an even bigger feat was how Alan Rubin got so much flavor out of this toro for less than a fiver. Nuances like graham cracker, wheat, oak, and spices – just to name a few. The tobaccos are a hand-picked bouquet from Nicaragua, then crowned by a brick colored Nicaraguan Habano wrapper. It’s a must-smoke cigar, and it’s easy to do so at its price!

From the Flor de Copan factory with love. And lots of it. Folks (myself included) sing the praises of Romeo 1875, but the Reserve blend of Nicaraguan and Honduran tobaccos is kind of like putting an 1875 in overdrive. The profile is sweet, spicy, satisfyingly robust and springs to life with hearty notes of peppers. If you somehow missed the boat on this classic, here’s how you double down on flavor on the cheap.

El Suelo, meaning the ground, are named for the soil – the most important variable when growing tobacco. A blend within L’Atelier’s catalog, both Pete Johnson of Tatuaje and the Garcia Family teamed up on this price conscious sleeper.  You’ll get notes of nuts, spices, and a hint of coffee from its Ecuador Habano wrapper, and bold Nicaraguan and Broadleaf long fillers. Time to wake up and smoke what you’ve been missing!

For once, some Hysteria that actually takes the stress away. Lunatic Hysteria by Aganorsa Leaf is a Famous exclusive teeming with coffee, cashews, hazelnut, and sweet spices – courtesy of its Mexican San Andres Maduro wrapper and Nicaraguan core. If you’re into bold cigars, Hysteria turns up the heat with some peppers on the finish, especially through the nose. Not for the faint of heart, but definitely for the faint of piggy banks.

Deep from within Toraño’s vault of fine cigars emerges Carlos Toraño Signature. It’s made exclusively for Famous and features a complex blend of Dominican and Nicaraguan Ligero leaves under a Brazilian Maduro wrapper. Flavors are spicy, earthy, and you’ll likely note some herbal nuances with leather and sweet wood. Above all else, Signature is expertly balanced and a great way to make a Lincoln work for you.

A cigarmaker who helped kick off the boom – and blended 2018’s Cigar of the Year – leave it to Ernesto Perez-Carrillo to whip up a stellar sub $5 smoke. Don’t be fooled by New Wave Connecticut’s mellow personality. Though the strength is low, flavors are accentuated beyond the blonde leaf’s typical fare. New Wave is ultra-creamy and littered with light spices, nuttiness, and sweetness. If you’re looking for a morning smoke with some extra flare, the buck – all five of them – stops here.

Couldn’t agree more with those Padrón Delicias. Those were my first experience with the brand. Needless to say, after those I had to try their more expensive smokes.
I don’t smoke as often as most so I can afford to buy higher end cigars. However, I’m just finishing up my humidor build and it will be in need of some filling. This list is perfect for the job!

I usaully have one of them Padron’s just about every day. they are mighty tasty.

Well, that’s too bad about The Big Payback not being in stock. Just sourced a tenner from another on-line vendor. My personal favorite under five dollar ceegar is the Chillin’ Moose Too…under $2.50 when bought by the box…fairly new blend, in my opinion, better than the original Chillin’ Moose and equal to or superior than any cigar in the ten dollar and up range…I will qualify that by saying that my palate is pretty unsophisticated, I just smoke what tastes good…and don’t parse the experience.

Buenaventura by Curivari makes my list. Great cigar under $5.

I don’t buy cigars that cost more than $5. Haven’t tried most of these, but agree with the La Gloria Wavell. It’s in my humidor now. My other favorites are Oliva Serie O robusto, Punch Signature Rothschild, and Perdomo Lot 23 robusto natural. Unfortunately, I can’t find the Lot 23 under $5 anymore.

With so many options this good below the $5, it’s hard to spend more! Thanks for reading, Randall.

Reading Time: 3 minutes In this edition of Top New Cigars, we smoke fresh sticks from Tim Ozgener, Caldwell, and Rocky Patel…plus, give you a chance to WIN $50 in cigar cash. See the reviews and enter now!

Reading Time: 9 minutes Maduro-nados: Besides the fact that you love this sweet, dark leaf, what else do you know about this delicious cigar choice? Go deep in the weeds with us as we dig out 5 fun facts about this fetching, extra-fermented tobacco, and why it’s such a fan favorite.

CA Report: Top 10 Expensive Cigars That Are Worth It