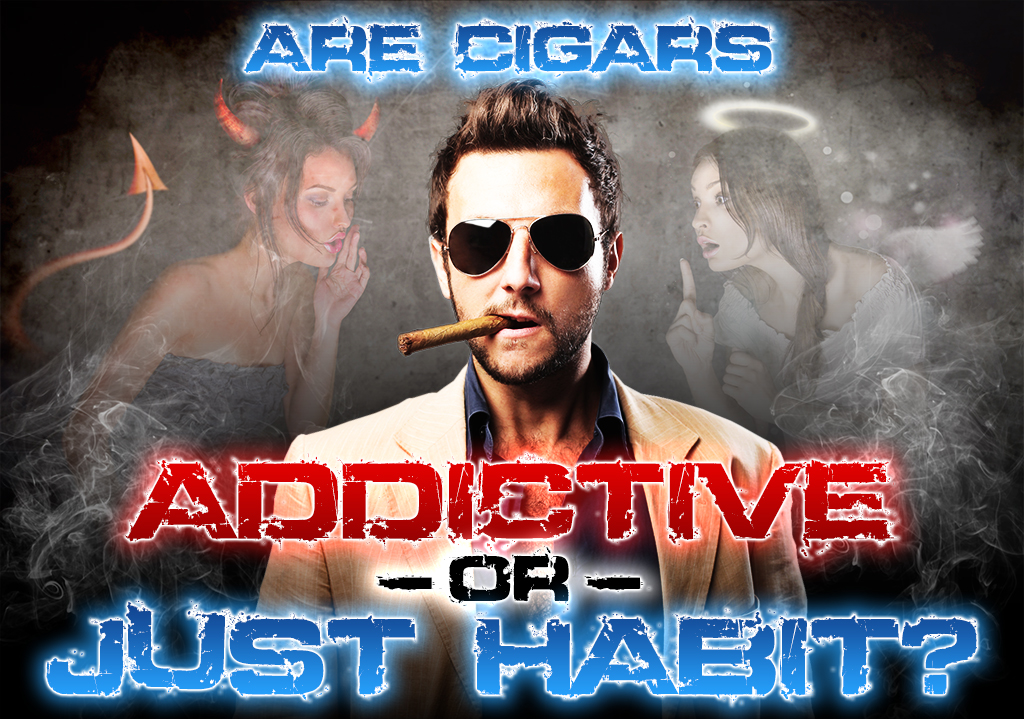 Are cigars addictive or just a habit?

I often wonder about that question, and the answer is “yes.”  You could ask the same question about coffee. If you have a cup of coffee every morning, it’s probably more of a habit – something you do on a regular basis – than an addiction. But if you drink 10 cups of coffee a day, one could make the case for addiction. Are cigars addictive? Read on to find out.

Whether it’s smoking cigars, playing online poker, or watching reality TV, just about anything can become addictive. What starts often as a hobby for some cigar smokers, may eventually become habitual, and beyond that, addictive. How do you define the three? Cigar smoking as a hobby would apply to a friend of mine who smokes only several cigars a month, though he might smoke more often if his wife wasn’t so insistent he take it outside. He also does a lot of domestic and international travel, and there are very few places left in the world where one can enjoy the company of a good cigar and a libation; so that also keeps his smoking to a bare minimum, but he’s fine with it. As Yoda would say, “A bona fide cigar hobbyist, he is.”

What about the habitual cigar smoker? According to an About.com article on the subject: “If you are a cigar enthusiast who routinely lights up more than a couple of cigars every day without even thinking about it, then cigars are a habit.” Fair enough. Mostly, I smoke only a couple of cigars a day, sometimes three, and on rare occasions, four, but I generally think about what I want to smoke before I take out my cutter. So, I’m an habitual cigar smoker for the most part, but I’m also addicted to a certain extent. I’ve noticed that on days where I don’t get to smoke a cigar, I tend to be a little edgy and irritable. If several days go by without a cigar, I eventually get used to it. That being said, I’m still thinking about when I’m going to have my next cigar. Sometimes I even plan which cigars I’m going to smoke the next day. So am I an habitual smoker or an addict? Probably somewhere in-between, but I lean more to the addiction side.

As for cigar smoking addicts, it’s fair to say that someone who can’t get through the day without smoking at least one cigar is addicted. The About.com article also states: “It cannot be determined whether cigars are a hobby, habit, or addiction based solely upon the number of cigars smoked.” If that seems to complicate matters, don’t be surprised; the line between habit and addiction is thinner than it appears.

Over the years I’ve met cigar smokers who smoke as many as 8 to 10 cigars a day. Now, I’m convinced they’re addicts because I don’t know how anyone can smoke that many cigars in a day without losing their ability to taste the difference between smokes. Usually, after three cigars, my palate is shot; plus, I tend to space them out over several hours. Some of these so-called “addicts” virtually chain-smoke their cigars, more likely because they’re more concerned with having something to puff on than what cigars they’re smoking. Being able to smoke 5 or 6 Padrón Aniversario 1964’s or Liga Privada No.9’s in a day – and there are those that do – may sound like heaven to a lot of cigar lovers, but I’d be surprised if they got the same kind of pleasure from the 6th cigar as they did from the first. The thing is, hard core addicts don’t care. They just want their nicotine fix. 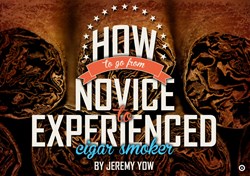 To be fair, keep in mind that just because a cigar smoker can handle smoking more than a few cigars during the day, it doesn’t mean they don’t appreciate the nuances of a fine cigar. If they didn’t, they probably would’ve given up cigars well before it became a regular part of their lifestyle.

Suffice it to say, addiction tends to leave the door open for problems to enter, so choose your habits wisely. Fortunately, cigar smoking is one of those habits that helps relieve stress and bond friendships.

I think you said it all, very well put all the way around.

I am addicted to the enjoyment that a dood cigar provides.

My general analysis of a cigar: first third has hints of tobacco. Second third has a general taste of tobacco. Third third has definite notes of tobacco. Overall impression, yummy! I’m far from an aficionado but I enjoy 1-2 a day these days and as a former smoker and chewer this concerns me. Now I’m stuck in the $3-7 range due to budget restraints, and I’ll be damned if I reduce to Backwoods or Dutchmasters, but damn this is getting expensive!

[…] Informations on that Topic: famous-smoke.com/cigaradvisor/cigars-habit-or-addiction/trackback […]

I’ve been wondering if I’m addicted. I started smoking 7 years ago. First, maybe once a week, and then up to once a day. Sometimes, I’ll have 2 or 3 in a day, especially on a Sunday watching football. From time to time I take a week off because I wonder if I’m addicted. I never feel any different. There is no withdrawal symptoms and my moods are the same. What I miss is the period of relaxation as I usually sit outside by the water when I smoke (got a TV out there and a shelter). I conclude I’m not addicted, but still I wonder about addiction, and also the possible negative health effects. I’ve had only 1 cigar over the past 9 days, and I think I’m going to limit myself to 1 per week. But, it will be a 30 dollar cigar instead of my usual 10 dollar cigar.

Hi Steven – Sounds like you love your cigars, but you want to be careful about your health. I can’t speak to health issues, but I can say that taking the occasional break from anything you do too often is a good way to reset and keeps you from getting tired of the same ol’ thing. I do it occasionally, sometimes unintentionally. I never inhale and actually prefer keeping my habit to an average of 2 cigars a day. These days, working from home, it’s more like one a day, if even that. That you think you may be addicted seems to mean you don’t want to overdo it. (I tend to be a little irritable on that day after when I don’t have a cigar.) If you were smoking 4 to 5 cigars a day, and we have followers who smoke that many and more per day, one could perceive that as “addiction.” I like giving my palate a rest between cigars, otherwise, a third or fourth cigar is just a waste because I can’t taste it. It’s really up to you. If you feel better cutting back, more power to you.
G-~