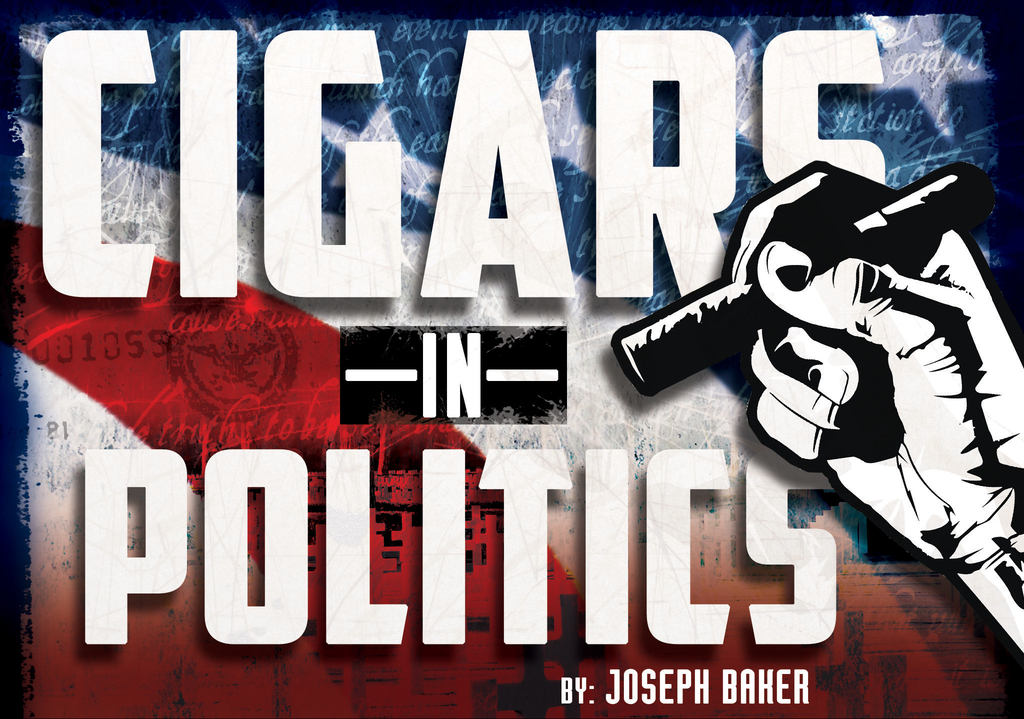 A young man of thirty-five stood stooped over, dripping with sweat. Using his hand, he wiped the sweat from his forehead. With only a couple of blocks from home remaining, John David “JD” Hayworth was about to complete his longest run of the week-a nine miler. His day had started with the usual routine, a jog around the track in his Scottsdale, Arizona neighborhood. Yet something about this day seemed to be different. His mind was cluttered with a barrage of thoughts and a modicum of self doubt. He had nine months to figure things out about running for Congress. What would it mean for his family? His career? He knew that his new bride, Mary, would fully support him whatever his decision, but he also knew his decision to run would mean uncertainty for her and possibly for him. His head throbbed from thinking so far ahead. Once those nine months had passed, he would have to decide whether to fully commit to run for Congress by representing the 5th Congressional District of Arizona, or continue his career as a successful TV sports anchor at Channel 10 in Phoenix.

Just as JD arrived home, as if on cue, Mary pulled up in the red family van, parked, and walked over to greet him with her warm smile. She knew instinctively what was eating at him.

“Well, in nine big ones, we're gonna have another little one!” said Mary.

The news made JD pause momentarily. “Honey, let's forget all this talk about running for Congress. There's nothing more important to me than family. I've got a great job, and a lot of guys would love to be the lead sports anchor in a major market.”

“No way,” said Mary emphatically. “Broadcasting is your career, but Congress is your calling.”

“It was a big deal for us,” said JD. “I had to cash in on my retirement plan. I wasn't backed by 'big tobacco' or huge corporations as The Left would have you to believe of us Conservatives. I was a nobody doing what I felt was my calling. I think that's the way our founders wanted it. That's why they said, 'I pledge my life, my fortune, my sacred honor.' They didn't want us to recycle the same old names for Congress. Being elected to Congress is being willing to serve your fellow Americans; to serve those who give us the privilege of being elected. 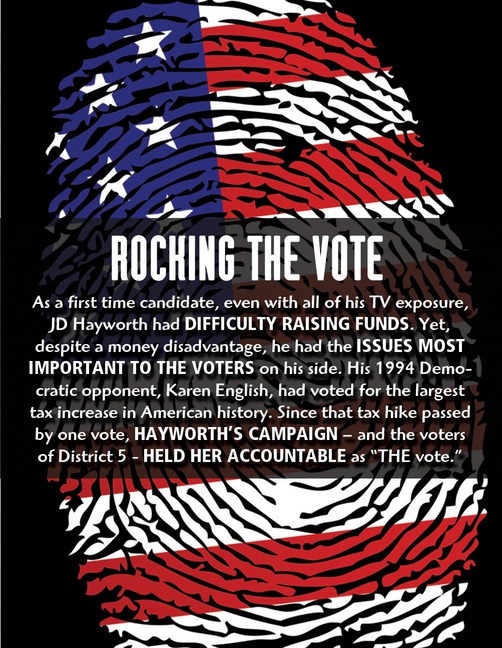 In November of 1994, JD Hayworth became part of the first Republican majority in forty years-the first in his lifetime. Being part of what is known as the “Republican Revolution” of 1994, Congress saw an influx of everyday men and woman, including general store owners and a man named George Radanovich, a vintner, who was the first recorded winemaker elected to congress since Thomas Jefferson.

Many of these everyday folks, newly elected to the House, were cigar smokers. After long days and weeks of battling on the floor of congress, JD fondly recalls that among the highlights of the job were the cigar night dinners hosted by the National Republican Club. It was a time to relax, forget about politics, and enjoy yourself. These nights were attended by members of both parties. Among them were Ed Pastor, a Democrat from JD's home state of Arizona, as well as Michael Capuano of Massachusetts, and a handful of other Democrats

“I have many fond memories of those cigar nights,” recalls JD. “And none more so than smoking cigars with Harold Rogers of Kentucky, who now is Chairman of the Appropriations Committee, and Howard Coble of North Carolina.”

Both men were huge cigar lovers and fierce supporters of the right to smoke cigars wherever and whenever you please.

“I recall many times when I would walk into Harold's office; it was always teeming with the smell of cigars,” said JD. “We shared many cigars together discussing politics, or just talking about our families and interests.”

Two years later, during JD's first re-election campaign, a vigorous, and at times, brutal, competition ensued. Democrats made him one of their top targets. Recruiting a former staffer of Vice President Al Gore to challenge Congressman Hayworth, the opposing party unloaded a barrage of attacks, including the time he welcomed The Tobacco Institute's annual convention to Arizona. Being an avid cigar smoker, JD was relentlessly hammered on the tobacco issue during his entire 12 years in congress. That year, almost immediately, special interest groups, a number of Democratic Arizona lawmakers, and the liberal media outlets pounced at the opportunity to smear Congressman Hayworth as a “big tobacco” guy.

JD found the hypocrisy laughable, since President Clinton had also divulged that he had a similar passion for cigars.

Recalling the time when he returned to Congress after his reelection, JD said, “When it came to discussing cigars or tobacco in general, Washington was not the Washington we see today. It was a cigar-friendly city. We were free to smoke in our offices and any number of other places at the Capitol. “It all changed when Nancy Pelosi became Speaker of the House. Now, good luck finding a place in Washington to smoke a cigar other than a cigar shop.” 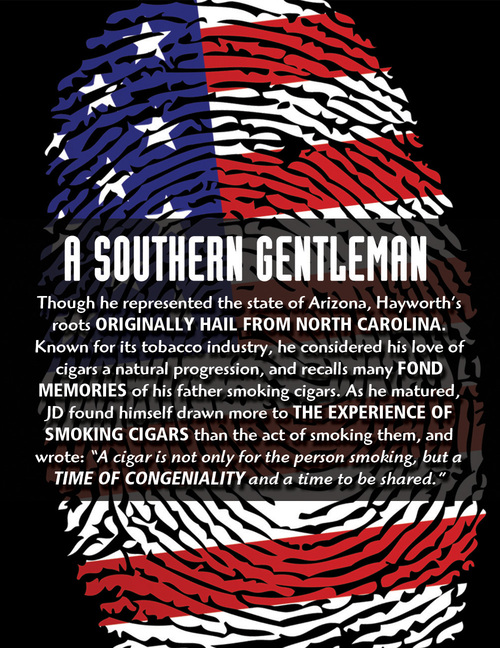 In the spring of 2001, JD decided to take his first trip abroad as a U.S Representative. The purpose of the trip was to look at security and how other countries dealt with it. Led by Rep. Hal Rogers (R-KY) and Rep. Martin Sabo (D-MN), they touched-down in Rome, Ismir, Istanbul, and Paris.

“I remember my stop in Paris the most from that trip,” said JD. “We have always had this curiously hot and cold relationship with France. The French are understandably proud and maddeningly egocentric. There were moments at the dinner that were uncomfortably tense until one of the French officials brought out some cigars. Suddenly, the evening took a ninety degree turn. Many of the problems remained unsolved, but we were all able to share something that we all loved, and it made a profound difference in the evening.”

It goes to prove once again something JD has always said: “Cigars invite commonality.” That night with the French officials started out as being very contentious. But it wasn't French wine that was able to bring us together, it was the cigars.

“Did we retreat to some smoke filled back room to broker a deal? No, those days are long past,” said JD. “I understand disagreements can be profound and heartfelt, but if there is one thing that can be used as a balm to take away the contentious nature of discussions, I've found cigars to be a great solution. I like to call it 'smoking over solutions.'”

During the next five years, JD continued to fight for the issues he loved, and several more trips were taken abroad. Again, cigars were the perfect icebreaker when dealing with government and diplomatic officials. “Cigars are the great neutralizers,” said JD. 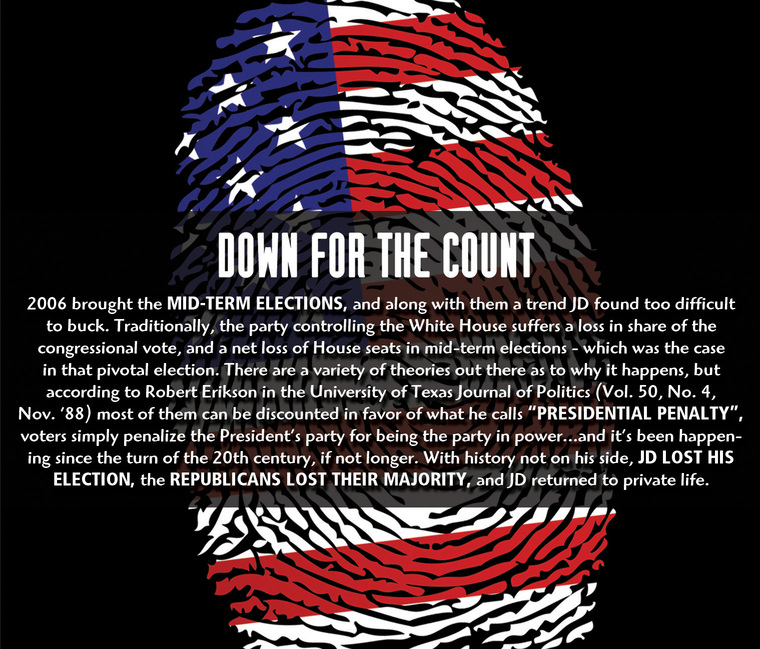 As he reflects back on that fateful election day in 2006, JD says, “I didn't look at it as a closing chapter in my life. Quite the contrary. I was proud the great people of Arizona let me serve them for twelve years.”

When asked if he ever plans to run for public office again, JD replies with all the tenacity of a twelve-year congressional veteran: “I've learned to never say never. But I can promise you, any thoughts of running again will be done over several good cigars.”

Joe works as a cigar critic offering his views on the finer things in life. His articles have been published in a variety of magazines and online blogs. In addition, he is an author and enjoys writing about his experiences as an outdoor guide. When not writing, he can be found spewing his musings on twitter at @RealJoeBaker

Reading Time: 2 minutes CAO Cigars has added a new three cigar selection to their legendary ‘X’ series. CAO BX3 is blended with three Brazilian-grown tobaccos starting with a Brazilian Mata Fina wrapper, plus an Arapiraca binder and another Brazilian leaf in the filler. Learn more about them here.

Reading Time: 17 minutes Let us help you pick some great cigar stuff for Christmas: whether you have a friend who loves cigars as much as you do, or you’re trying to drop some hints on a cigar gift you’d really like – “It’s the thought that counts.” And we have a LOT of thoughts – See the list NOW!

How I Review a Cigar