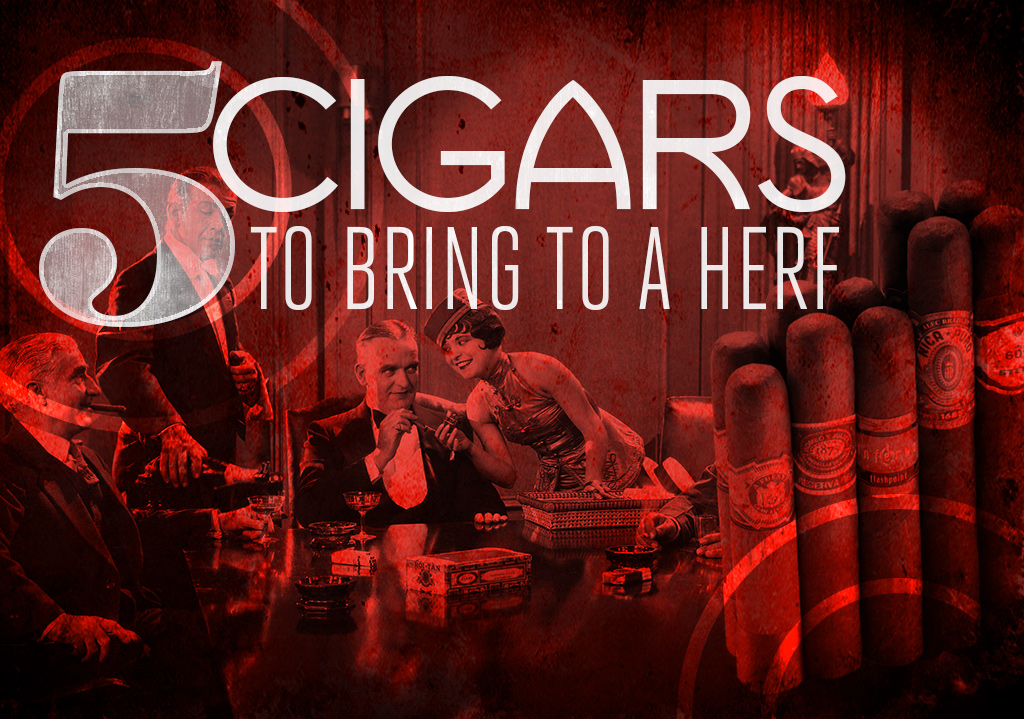 Top 5 Cigars to Bring to a Herf

Herf: (verb) To smoke a cigar, in a group of cigar smokers or alone.

In case you’re wondering if the term “herf” is an acronym for having something to do with cigars, it’s not. Other than having been coined during the mid-1990’s cigar boom by a cigar newsgroup, no one seems to know its roots. What we do know is that the word is also a noun for “cigar party,” or “get-together” where fellow cigar smokers meet at a certain location to relax, smoke, and sometimes, to share or trade cigars.

A herf can be held at a cigar store or lounge, a bar that permits smoking cigars, or at someone’s home (usually in the backyard). For cigar smokers who don’t have the opportunity to smoke at home or as often as they would like, a herf can be a special occasion where one might be inclined to bring some of their best cigars.

Note that a herf is not necessarily an excuse to “show-off” your Fuente OpusX collection. A “herf-worthy cigar” is any cigar that you feel is best for enjoying under ideal conditions. If you’re also planning to trade or share cigars, you should probably bring along some of your top-drawer primos. Moreover, since you will most likely spend several hours at a herf, you may want to choose cigars in larger sizes like Toros, Churchills, Double Coronas, and Torpedoes that you can savor for at least an hour or more.

So, what are some of the best “herf-worthy” cigars? There are hundreds of cigars you could choose for herfing, but for simplicity’s sake, let’s narrow it down to a handful of brands that are well-known for their excellent construction, rich taste, and reasonable prices.

A good brand to start with is Arturo Fuente cigars. Their reputation precedes them, and they always deliver on quality and flavor for the money. The “8-5-8 Flor Fina” appears to be a universal favorite for its sweet, cedary flavor profile and perfect dimensions. Go for the maduro, or the natural with a Cameroon wrapper. The “Chateau Fuente” cigars are also great herf sticks. Presented in cedar sleeves with Ecuadorian Connecticut wrappers, they offer a smooth, naturally sweet, medium-bodied flavor; add their excellent burn and engaging aroma, and you won’t find many cigars more relaxing than a Fuente.

If you’re a full-bodied cigar smoker, any stick from the 601 cigars portfolio is most definitely herf-worthy. Made by Erik Espinosa at his La Zona factory in Estelí, I prefer the 601 “Blue” Maduro box-press and the 601 “Green” Oscuro for their depth of flavor and complexity. If you like a smoke with more peppery spice, the 601 “Red” or “La Bomba” edition may be in order. Recently, I had one of the 601 “Steel” cigars, a new line extension that seems to have taken the best of everything from the other lines. You’ve got the dark Oscuro Habano wrapper, the bold, high-priming Nicaraguan tobaccos, and a smoke that’s as smooth on the palate as it is robust. These puros also pair well with espresso, an IPA, a vintage Port, or 12 year-aged single malt scotch. One benefit of bringing a 601 Steel to a herf is that it’s still a relatively new cigar. Since there may be others that haven’t smoked it or heard of it, you can call their attention to it, and it may even be share or trade-worthy, so bring a few of them just in case.

Speaking of full-bodied cigars, Oliva cigars have created some of the best in recent years, like their Serie “V,” “V Melanio,” Oliva “Cain,” and “Master Blends 3” editions. Any of the aforementioned lines make great herf smokes, as do most of the frontmarks in Oliva’s Serie “O” line. That said, the “Inferno” by Oliva selections are also exceedingly herf-worthy. These are Oliva super primos in every respect. From the high-grade Nicaraguan ligero tobaccos, to the plush Sumatra wrappers, to the wickedly smooth smoke and complex flavor profile, here again, you’ve got a unique cigar that will turn heads and raise questions like, “Where can I get one of those?”

Classic brands like Romeo y Julieta cigars are a welcome addition to any herf. The thing is, there are so many Romeo line extensions, which one do you bring? It’s a tough call. I would suggest anything from the 1875 core line, the “Vintage” series, “Reserve Maduro,” the “RyJ” Nicaraguan, or the “ROmeO” series. Still, the one series that’s always been a stand-out is the “Reserva Real” selection. The blend is one that’s commonly found in a lot of brands: Dominican & Nicaraguan long-fillers, Nicaraguan binder, and an Ecuadorian Connecticut Shade wrapper. It must be the way the tobaccos are fermented and aged, because what reads like an “ordinary” premium blend sure doesn’t taste like one. This is an ultra-creamy, medium-bodied smoke that pumps out sweet-cedary flavor and aroma like a Texas oil well. I’m willing to bet that if you bring a few of these to your next herf, you’ll get some good trade offers, too.

If there ever were cigars made for herfing, consider bringing some Alec Bradley cigars to your next herf. From their award-winning “Tempus” selection, which was created with the notion of spending quality ‘time’ with a great cigar in mind, to their high-scoring “Prensado” series, the all-perfecto shape “Mundial” selection, and many more, I suggest the Alec Bradley “Nica Puro.” An almost jet-black Nicaraguan Criollo wrapper encases a diverse, perfectly-balanced Nicaraguan core that’s so rich, creamy, and aromatic you’ll taste in the very first puff – and it only gets better from there. You can find a lot of great Nicaraguan puros out there, but this one is truly exceptional.

As I stated above, you’ve got a virtually endless list of herf-worthy cigars from which to choose, so here are some other notable brands that deserve honorable mentions: Any Padrón Aniversario or 1926, Hemingway Signature, any Ashton Virgin or Estate Sun Grown, Perdomo 20th Anniversary Sun Grown or maduro, A. Fuente Don Carlos Robusto, Tatuaje Cojonu 2012, My Father Le Bijou 1922, Punch Rare Corojo Pita or Double Corona, Aging Room Small Batch 356, E.P. Carrillo La Historia, Montecristo No.2, and the Rocky Patel 15th Anniversary. I could go on ad infinitum, but I’ll stop there.

If you’ve been to a few herfs by now, or are planning on going to one soon, let me know what cigars you would bring to smoke, trade, or share by leaving a comment. And until next time…happy herfing!

5 Things You Need to Know About… Cigar Tubes