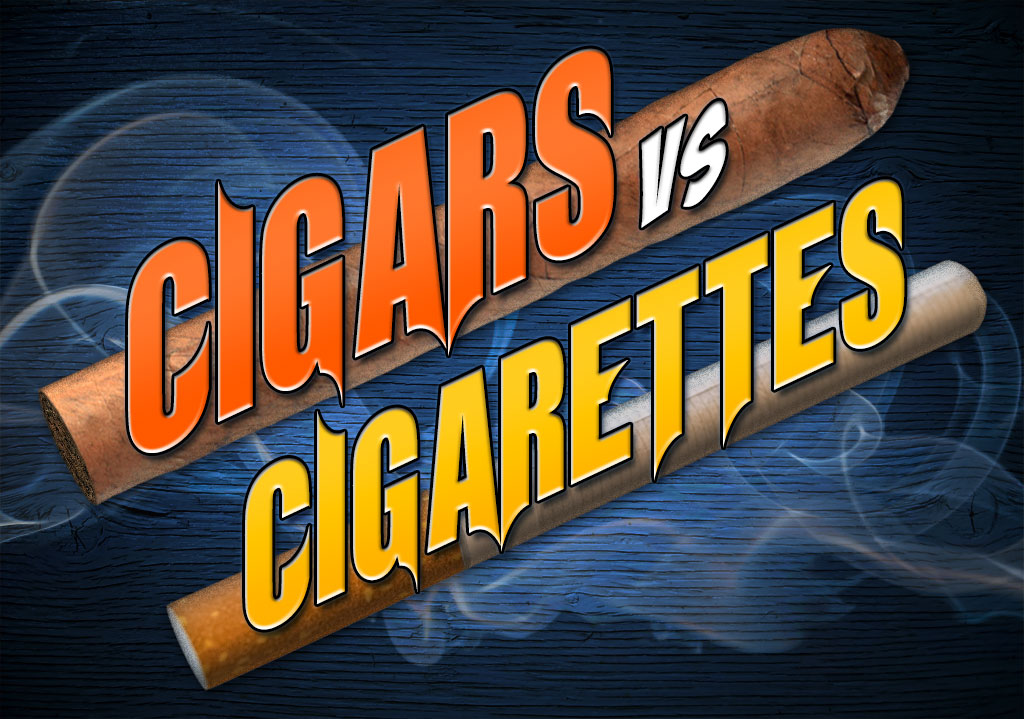 There’s been a lingering question out there when it comes to smoking, and it’s in making the distinction between premium cigars and cigarettes. The question has bubbled to the surface again in the face of pending FDA cigar regulations, many of which are modeled after regulations already in place for cigarettes. The folks pushing for these regulations frequently take the viewpoint that tobacco is the same in any form, therefore, they feel regulations should be uniform as well. This thought-process leads us back to our original question – what are the differences of cigars vs. cigarettes? The answers, unsurprisingly, run as wide a range as the number of people who you might ask for guidance. But today, we’re going to draw some major differences between premium cigars and cigarettes – and I got nominated, since I’ve had my fair share of both. I’m not afraid to admit it – I was a cigarette smoker for many moons, and many Marlboros; today, I smoke cigars exclusively. But let’s be clear – smoking, isn’t just smoking.

Your mileage may vary – but chances are, you and I are a lot alike if you’ve smoked cigarettes or premium cigars. We smoke cigarettes to get a buzz, keep us awake, deal with jittery nerves, or – let’s admit it – because of addiction. There, I said it. Cigarette smokers are addicted to the however many thousands of chemicals (many of them NOT a natural component of tobacco or its smoke) in cigarettes. How do I know I was addicted? It was hell quitting. That’s a sign.

I smoke premium cigars exclusively today, because I enjoy it – not because I have to have something to tame the nicotine monster every 45 minutes. Do cigars have nicotine? Sure – and that brings us to the act of smoking itself. I know, I know – all you folks who say smoking in any form is just straight-up unhealthy and offensive to anyone and everyone within 100 miles of me and my cigar. Do you say the same thing about medicinal marijuana? Does taking in weed for medicinal benefit, through the act of smoking it, make it less of a medicinal treatment in your eyes? It’s interesting how that part of the argument gets overlooked so often…

The anti-tobacco powers-that-be themselves acknowledge there’s a difference between premium cigars and cigarettes, even though they’re bound and determined to treat them the exact same way for the purposes of revenue collection. According to the .gov folks, cigarettes are uniform in their construction, made from tobaccos that are never fermented and rolled in paper; premium cigars are composed only of tobacco (filler, wrapper and all) – and can vary in size and shape. Cigarettes are machine made from cheaper, low-grade tobacco; let’s not even dip our collective toe into the pool of chemicals that are added to cigarettes, shall we? Premium cigars, on the other hand, are a hand made product – 100% natural, fermented tobacco and manufactured under strict quality control.

Cigars vs. Cigarettes – The Act

Lighting up? If your smoke is a cigarette, you’re supposed to take a big, deep inhale to get all those chemicals flowing into your bloodstream. Cigars? A shallow puff or two to take the smoke into your mouth, roll it around your palate to taste the flavors and exhale. And that’s one of the biggest keys – taste the flavors. The same way you might savor the finish of a bite of steak, or a glass of wine…something I certainly couldn’t do when I smoked cigarettes. Cigarette smoking blew out my taste buds. I didn’t have a sense of smell for six months, even after I quit. Now, I actually can taste things again – not only in my premium cigars, but food, drinks and the flavors in them. Did I mention I can run up a flight of stairs without being out of breath, too?

This is because cigars are constructed of premium quality tobacco – often, several different kinds for the wrapper and underlying components, each chosen to create a sense of body and flavor that isn’t unlike the process winemakers go through when experimenting with varietals. Cigar tobacco is aged under specific conditions, and has a variety of flavors depending upon aging, country of origin, and more. You’ll also notice the word “aroma” being used in conjunction with premium cigars…why not cigarettes? Because not many people develop an appreciation for the sensation delivered by a raging tire fire with a Camel logo on it.

Cigars vs. Cigarettes – The Other Stuff

Premium cigars are meant to be savored, with a long smoke time, as opposed to cigarettes – which burn faster. Let’s just say you’re smoking a cigar for the experience…the relaxation…the ability of a group of friends to get together and share a smoke and some good times. I’d be so bold as to say that you smoke cigarettes to survive the cravings from one to the next. I know. I’ve been there.

So next time someone asks you, tell them “it’s time to clear the air” – there are many large differences in the breakdown of premium cigars vs. cigarettes.

I smoked cigarettes briefly when I was in the service & out later, it was never consistent at all, I’d take over a year to smoke a whole pack & by then, it wasn’t good anymore. I never liked cigarettes at all. My family has a history of cigarette smokers (mom, 2 of my brothers too) & we grew up for a few years around the 2nd hand smoke which really bugged me too. I started buying cigars that are hand rolled from usually the Dominican Republican area that are shipped here to the U.S. about 2-3yrs ago. Since then, I’ve come to really appreciate the aroma’s & tastes & relaxations from smoking cigars. My wife doesn’t even mind them, she even smokes 1, once in a blue moon when she’s hanging out with me. Cigarettes compared to Cigars? HA. Not even close to being the same by much if we’re talking negativity. Rat poison is just 1 poison put into cigarettes that I can’t believe people are willing to ingest, but whatever floats their boats. For now, I’ll keep enjoying my premium cigars & the God given gift that tobacco leaves are.

I quit smoking in 1997. Pipes and Cigars were always something I was interested in and I told myself, as I got closer to retirement from the military and older, I would maybe get into something like this. The pairing of Pipes and Cigars with bourbons, rums, and scotch was intriguing and pulled at my interest. While deployed to the middle east last year, I decided to try my hand at it and have since gotten a great deal of satisfaction and knowledge from participating in smoking cigars. It is relaxing and I can go weeks or months without one, so it isn’t about addiction and is a very enjoyable social activity or way to unwind. There are many differences in smoking cigarettes and cigars. I am glad, I don’t smoke the cigarettes I used to and smell nasty like I did from them. Cigars, and pipes are the only way to go anymore.

I could not notice the date of this. So that being the case. Has anything changed regarding your current knowledge of cigars.

I like what you said about cigars and how shallow puffs fill your mouth with smoke. When it comes to chewing or smoking tobacco, it’s important to buy a quality product. My friend wants to buy some wholesale tobacco, so I’ll help him find a reliable business to work with.

[…] What is the Difference Cigar VS Cigarettes – Famous Smoke […]

I just got a Colombian cigar straight form Cuba and tore it apart to make a cigarette. Come and find me

Can a person pass a tobacco urine test smoking cigars? My medical provider makes you pass a urine test before you can have surgery. Please help me with this.

But does this apply to “Small Cigars”? And if so, how in the world can they afford to sell them so cheap with all that “Premium tobacco “?

Hello Pastor Cone –
Not really. Even small cigars offer a lot of the same rich tobacco flavor and aroma of many large cigars.
The reason they can sell them “so cheap” is because they are made with chopped tobacco which, even though it is high quality leaf, is much less expensive, since they use so much less of it.
Hope that helps,
G-~

Do not cigarette manufacturers have to pay taxes cigar makers do not?

I smoked cigarettes for 20 years. It gave me heart disease, smelled terrible and affected my lungs, heart, blood pressure and more. I started smoking cigars about the time I quit cigarettes. The chief difference … I don’t inhale cigar smoke. I only smoke outside and I only smoke one (rarely two) a day and often skip a day or two. I breath better, my heart is healthier (by far) and I am healthier. Now I enjoy the aroma and the wonderful sensations of smoking because I like it rather than because I have to. I never wake up craving a smoke. I leave my home without checking for my “pack of smokes” or my lighter. I enjoy a relaxing time with my cigar. It’s night and day. Don’t smoke if think they are the same as cigarettes. But if you’re going to smoke … make it a cigar or pipe. Either are better than cigarettes. By far.