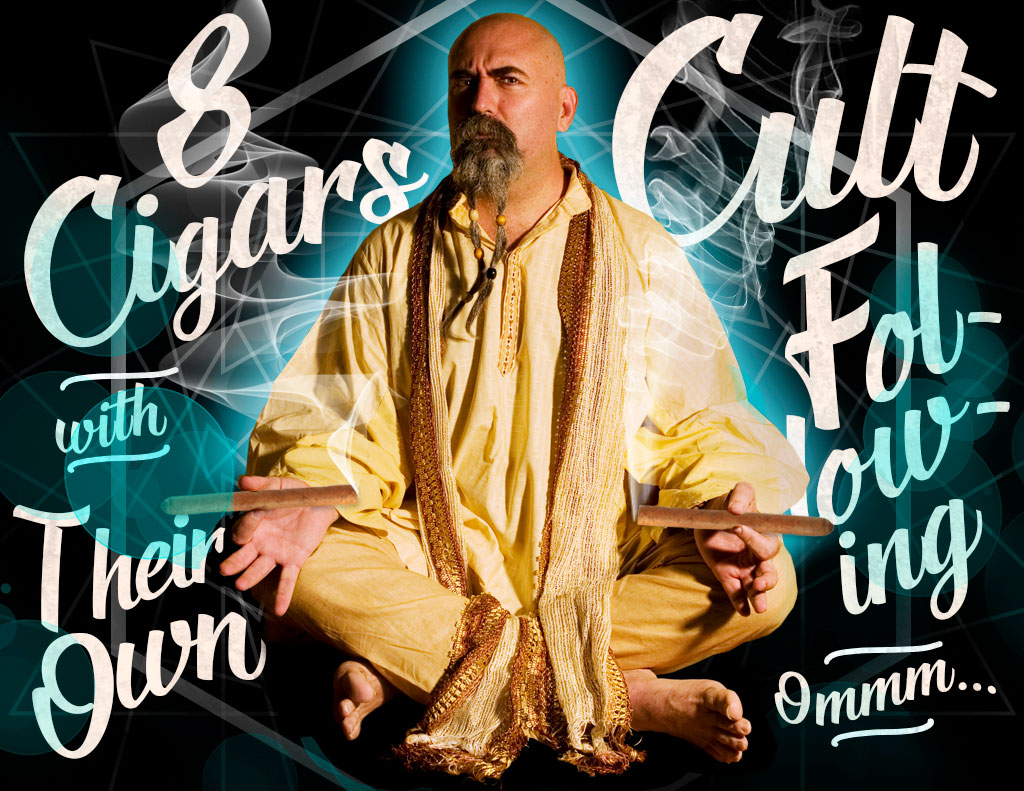 Eight Cigars with Their Own Cult Following

So-called experts may disagree about what makes a group of people a cult; but when it comes to a person’s choice in cigars, it makes a cigar cultist pretty easy to spot. Look at the Internet: Instagram, Facebook, cigar forums and Twitter are awash in a sea of messages from cultists about #cigars, being the #cigarboss and how the #cigarlife and #cigarsociety are incomplete unless they #sharetheleaf with #botl and #sotl about this incredible cigar they’re #nowsmoking. Sure, their eccentricities may make you want to choke your smoking buddies who engage in this “in your face” embrace of the #cigarlifestyle; but unless they’re wearing purple snuggies and brand-new Nike tennis sneakers, it doesn’t make them bad people. Set aside their flagrant disregard for the global hashtag supply and you’ll realize your pals are smoking some pretty great cigars. Yes, the cigar cultists are just like you and me, normal in every way….except they just seem to have a little “special sauce” sprinkled on ‘em when you ask what they like to smoke.

So instead of having your cigar pals deprogrammed, ask what makes these people so excessively devoted to their favorite cigar or cigar maker’s work (I’m sure they’ll tell you). It’s probably because your friends have repeatedly failed to find meaning – or at least, satisfaction – in the mainstream cigar experience. And since I’m an advocate for the protection of your religious cigar freedom, here are eight of the biggest cigar makers with a cult following out there right now:

What is it about Erik Espinosa that has allowed him to amass a cult following? Aside from being a wickedly funny dude with a bro-hug for everybody in the room (and a great story teller – sit with him for any amount of time and you’ll see), it’s his factory’s reputation for flavor stamped with his brand of strength. Case in point, 601 Steel: an addition to the already full-bodied 601 line, Steel is armed with a hefty stockpile of Nicaraguan ligero firepower, and Espinosa isn’t afraid to use it. It smokes bold, and with a dark Oscuro Habano wrapper, full. Those who smoke stronger cigars are beside themselves when talking up 601. Now you’ll see why.

“Smoke somethin‘ good!” It’s the single, simple commandment from the gospel of Crowned Heads’ Jon Huber. Crowned Heads devotees preach about Huber’s work because he’s the anti-hype – focusing on making cigars instead of marketing campaigns. Northern, one half of the limited edition Mason Dixon Project, is a tasty little bundle of sweetly-spiced Nicaraguan hedonism wrapped in CT Broadleaf. But you didn’t read that in an ad, your #botls keyed up on Crowned Heads told you – and many of them believe this peppery, medium-full blend is a mere step from salvation.

Pepin. Saying his name is like sounding the “Om” mantra, but for cigar people. “Ommmmmmm…”. Pepiiiiiiiiiinnnnn…”. Jose Garcia is the guru of spice, and it’s Le Bijou – “the jewel” – that causes his converts’ taste buds go helter skelter. The Pelo de Oro wrapper is ridiculously difficult to grow, which only elevates his mystical status; starting sweet and creamy, the big and FULL-bodied Nicaraguan tobaccos inside will have you and your humidor in full worship mode in no time. The hyperactive Pepin fans among us know what I’m talking about.

Limited edition is an essential part of the #cigarlife, and Ezra Zion’s Kyle Hoover & Chris Kelly do not disappoint with the 2014 version of Tantrum. This wickedly oversized petit corona (called “Prensado Pequeño”) is wrapped in a 7 year-aged leaf and stuffed with mostly Nicaraguan Corojo to sway even the most unswayable of taste buds. But Kyle & Chris have cultivated their following not just for great boutique smokes; it’s because there’s excessively ludicrous fun to be had hanging out with these guys in any fashion. If you haven’t had the chance, drink the Ezra Zion Kool-Aid – it never goes sour.

Matt Booth is here, and he came to party: “let’s do all 60 ring cigars,” he said. “And let’s call it the ‘Bad-ass Motherf*cker,’” he said. Believe: Boofzilla delivers a 3 nation blend (Honduras, Mexico, Dominican) under well-fermented Ecuadorian Habano wrapper that teems with a flavor that’ll have you asking, “where the hell did THAT come from?” That’s how Booth rolls, and why Room 101’s true believers appreciate a smoke that stimulates every square inch of their grey matter, straight up through their frontal lobes.

Why do people dig Jesus Fuego? Because he loves to sit and talk about cigars for hours. But mostly, it’s because Fuego is literally a man of the earth: his family owned a portion of the famed El Corojo farm in Cuba where the strain of tobacco was developed, so for him the leaf is a DNA thing. And it shows in his work…Heat speaks to the full-bodied faithful, delivering on quality, balance and flavor through Nicaraguan Criollo and Corojo tobaccos. “More Cuban than real Cubans,” said one Fuego-berserk cigar friend. The bonus is, Fuego keeps it affordable. What’s not to love about that?

Drew Estate pretty much invented the concept of the cult following; it would surprise no one if we learned there were Liga-smoking communes centered around Jonathan Drew statues the size of an Easter Island Mo’ai head. But the next shrine-worthy member of the DE team is Master Blender Willy Herrera, whose namesake smoke grabbed the attention of Cigarland. Its creamy, medium-plus mix blends the spice and sweet of Nicaraguan and Honduran tobaccos, and Willy’s Cuban pedigree makes this smoke a must-try treat. There is a reason for your pals’ Drew Estate evangelism, and it is not to be discounted here.

Let’s face it – if we were going by looks alone, Pete Johnson isn’t the ideal random stranger you want to meet in a dark alley. But that’s what makes Pete, Pete. Scratch the surface and you reveal a humble dude who lets his work do the talking for him. And it has spoken volumes, evidenced by the legion of Tatuaje fans he has amassed across the internet. Havana VI testifies to the Tatuaje reputation for consistency and quality: hooking up again with Jose Pepin Garcia, Johnson has found his way into a mother lode of select Nicaraguan tobaccos to make this puro. Take the advice of the Tatuaje cigar nuts in your posse – this here is a reason they’re so amped up.

We have all long agreed that cigar smoking is a ritual – and for some of us, and these boutiques we love, it becomes a kind of worship. But if cigar worship is wrong, we don’t want to be right: buy and try the one that’s right for you (or comment below with the cigar you proselytize about with reckless and cult-like abandon) , and head to higher ground.

Reading Time: 2 minutes This happy hour goes out to the barbecue chef in all of us. Cigars and bbq go together like peanut butter and jelly; and when you throw a crisp, cool beer into the mix- boy, you’re bordering nirvana. This week’s pairing is versatile; with a beer hailing from the beaches of Long Island and a cigar designed for beer, this dynamic duo will be the hit of your next pig roast.

2020 CA Report: Four All Dominican Cigars You Should Smoke at Least Once