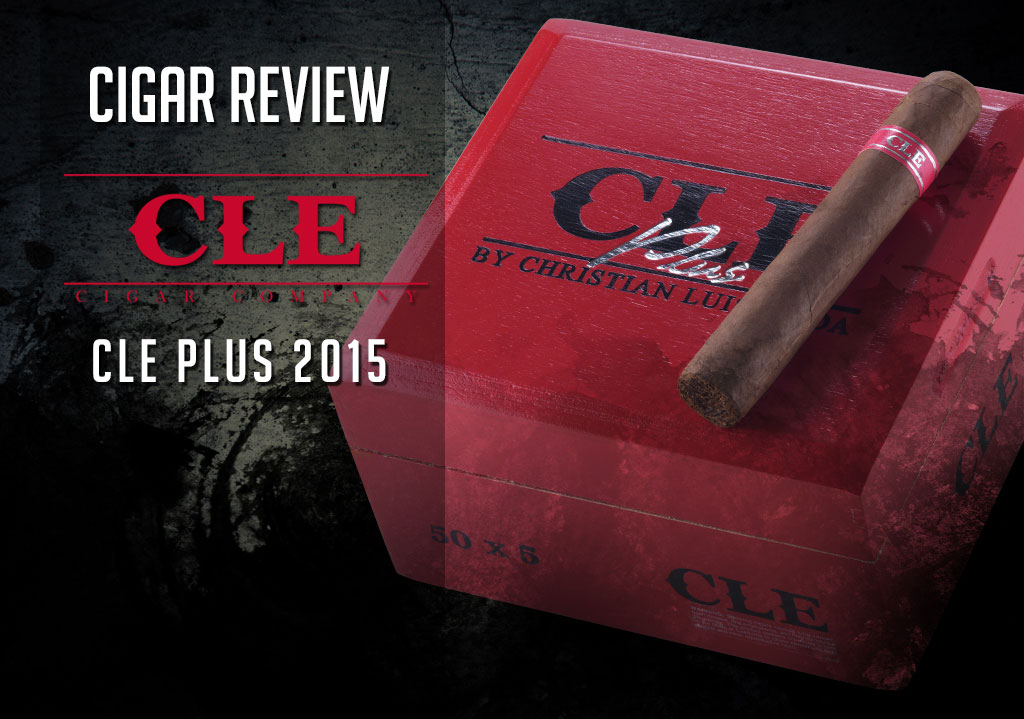 Christian Eiroa – President of CLE Cigars – and his family made a name for themselves on their long lineage of top-notch Honduran Corojo cigar tobacco (if you’ve smoked Camacho, you know this already). The stuff they grew on their farms basically defined the taste of this tobacco, as it had a new, more potent taste than the previous Corojos grown in places like Cuba. The version hailing from Honduras tends to be very spicy, very peppery; it’s also thick with the hints of wood, earth and leather that show up in other Honduran-grown tobacco. Cigars that are wrapped in this kind of Corojo often tend to be those that get described as “Cubanesque.” Interestingly, many of those traits weren’t as clearly evident throughout our CLE Plus 2015 cigar review, except for the Cubanesque part…it even looks like a Havana.

So to get a rounder appreciation for the variety in the cigars Christian makes, and the flavor profile of the Corojo his family grows, we put the revamped version of this stick to the test in this CLE Plus 2015 cigar review panel video. Apparently, the flavor, strength and body of the original version of the Plus (which was released in 2013) were still raw and unrefined; so Eiroa took it upon himself to do some tweaking, and smooth the sharp edges with a new version of this smoke that was toned down in strength, but still full in flavor. And to do it, he used an all-Honduran Corojo recipe.

We were thinking the same thing: how’s he going to do that, if Corojo is so robust? Well, it’s also very flavorful…and that’s where Christian must have concentrated his energy, as the new-not-new version we smoked for our CLE Plus 2015 cigar review had all the big-time tastes, without the bite. Sound like something you’d like to smoke? Watch as the Advisor panelists smoke their way through this CLE cigar review, and get all the details on this smoke in our tasting notes below!

Construction and Overall Appearance: Very smooth Corojo wrapper, nicely finished but for a few small blems. Both were firm and well-packed; one of the 2 bordered on tight.
Draw: On the one I smoked in the CLE Plus 2015 cigar review video, perfect; on the one before, not so much.
Pre-light flavor: Malty, chocolatey and earthy – raisin even made an appearance. I’ve never sensed this before.
Toasting & Light: Very easy, took the flame quickly.
Base flavors: Right out of the gate, tea…cream…some dark coffee…raisin.
Aroma: Mellow, with a floral note that jumped out about ¾” of an inch in.
Burn / Ash Quality: More than a little flaky, wavy burn line – this was packed very tight. But core part of the ash held on fairly well. Taking it slow helped – once it was past whatever was bottlenecking everything, the burn line evened out.
Balance of flavors: Very well balanced, from start to finish.
Consistency: Consistent over complex, this cigar sets in with its flavors, locks in the cruise control and just goes.

A couple of things you need to know about the CLE Plus 2015…this is a retooling of the original blend devised in 2013, which was much stronger – potent, even. While I’m not sure why, Christian Eiroa decided to “smooth out the edges,” as it were; but boy, am I glad he did. All Honduran, this cigar smokes without any heady pepper and spice that might otherwise get in the way of savoring some of the very unique flavors inside. Sometimes you just need that. I described this as a piñata full of flavors, and they all came out at once: tea, cream, dark coffee, raisin, the list goes on and on. But here’s the thing – the cigar retained a medium body all throughout, with these full and diverse flavors rocketing out of the gate from the start and lasting all the way through to the nub. They even intensify a little toward the end; and that, friends, is consistency defined.

This CLE isn’t an in yo’ face cigar like many of his others – and if Eiroa was going for “refined” on this new version, he stuck the landing and I give him a “10.” If you’re patient and take your time with this and smoke it slow, this stick pays dividends in flavor. Put this one on your must-smoke list immediately.

Every so often I discover a cigar that I categorize as a “perfect cigar,” and this CLE Plus 2015 Robusto joins that circle for its overall construction, flavor, balance, consistency and aroma. I just couldn’t find any flaws with it – and that’s based on having smoked two of them on consecutive days. I should add that I have a preference for Honduran tobacco, and nobody does Honduran Corojo like Julio & Christian Eiroa, and as I said in the CLE Plus 2015 cigar video review, if this cigar didn’t have a band, with its dark grey ash and sweet, earthy-woody flavors, it could pass for a Havana.

All that aside, this Honduran puro stands on its own. The smoke starts out with a sweet, earthy-woody base and builds smoothly along the way without veering off the track. I welcomed notes of caramel, nutmeg, cocoa and citrus with anticipation each time I drew on it. It’s mellow enough to smoke with coffee in the morning and flavorful enough to relax with in the afternoon or evening – a true “any time of day cigar.”

Finally, I was so impressed with this new blend, that by the end of the first robusto I had decided to add this line to my “must buy” list. After smoking the second and finding it equal to, and in some ways, even better than the previous cigar, I will be spreading the gospel of this selection to anyone who’ll listen. For now, I’ll stop here because my gushing over how much I enjoyed it is starting to get annoying. Suffice it to say, if you want non-stop flavor in a creamy, medium-bodied cigar at a pretty reasonable price, too, get one of these CLE Plus 2015’s in-between your thumb and forefinger as soon as possible.

Construction: Great construction. My first cigar had a small crater-like feature in the wrapper leaf, but other than that, every cigar I’ve seen or smoked looks great.
Draw: Simply put, it was perfect.
First few puffs: Very mellow. No real spice to speak of, but plenty of floral notes. It’s a really unique smoke to be sure. It follows almost like a black Irish Breakfast tea and real charred woody notes.
Base flavors: Base flavors are staying in the floral category, but with some slight complementary spice and a slight charred woodiness. Very enjoyable.
Aroma: Also very floral. It’s like a sweet and floral aroma mixed together. It’s such an odd sensation, but perfectly complements the smoke.
Burn/Ash: Even burn all the way up to the final inch or two before it started to favor one side over the other. I can blame myself for not rotating as I smoke, but I think it may just be the cigar itself. A quick fix could be to go all scorched earth on the unburnt side, but smoking the cigar with the unburnt side facing the ground should even it out in a few minutes. As for the ash, it’s a little flaky, so break out the smoking jackets.
Balance of Flavor: The mix of flavors is truly unique, but they just go together so well.
Consistency: The smoke itself is very consistent. It really digs its heels in and stays put in terms of flavor, but it has a load, and I mean a frickin’ load of flavor in it. From one cigar to the next, the consistency is there as well. You’re never going to be surprised by this cigar if you smoke one today and another a year down the road. It’ll be the same incredible smoke.

I may be a little biased here, but I love everything CLE puts out. Christian Eiroa is a master of Honduran tobacco and this Honduran Puro is absolutely spot on. I thought for a specialty cigar or more boutique cigar, he would want to go all out and ramp up the flavor and strength to 11 and let the hardcore smokers go nuts with it. Instead, Christian went kind of the opposite with this cigar. It’s refined, well-rounded, and puts a lot more emphasis on flavor than strength. This is what I believe to be a full-flavored, medium-strength cigar for an overall medium to full-bodied smoke.

In terms of flavor, it sticks with that floral black tea note throughout with a sweet maltiness, a very mild spice, and an almost buttery note towards the end that appears within the last few inches. Charred wood also remains throughout as a great supporting note that lingers a bit on the aftertaste. No bitter notes, no overpowering flavors, no nicotine bite… I mean, this is a lounging cigar through and through with a sweet and floral, massively supportive aroma.

For extra credit, try drinking a lighter, malt-forward American ale to help match the slightly malty notes, or a milder IPA to match the floral notes.

Positives: This is a boxer: a cigar so good, you can’t just settle on a 5 pack. You MUST buy a box.

Negatives: The charred woody note on the aftertaste lingers a bit too long and develops into a sweet yet ashy flavor on your palate. It’s great during the smoke because it complements the flavors within the cigar, but afterwards, you might need something to cleanse the palate.

Reading Time: 6 minutes If the allure of dark-leaf cigars is calling, we’ve got your number. View our list of 10 solid Maduro-wrapped beauties that are perfect for first-timers!