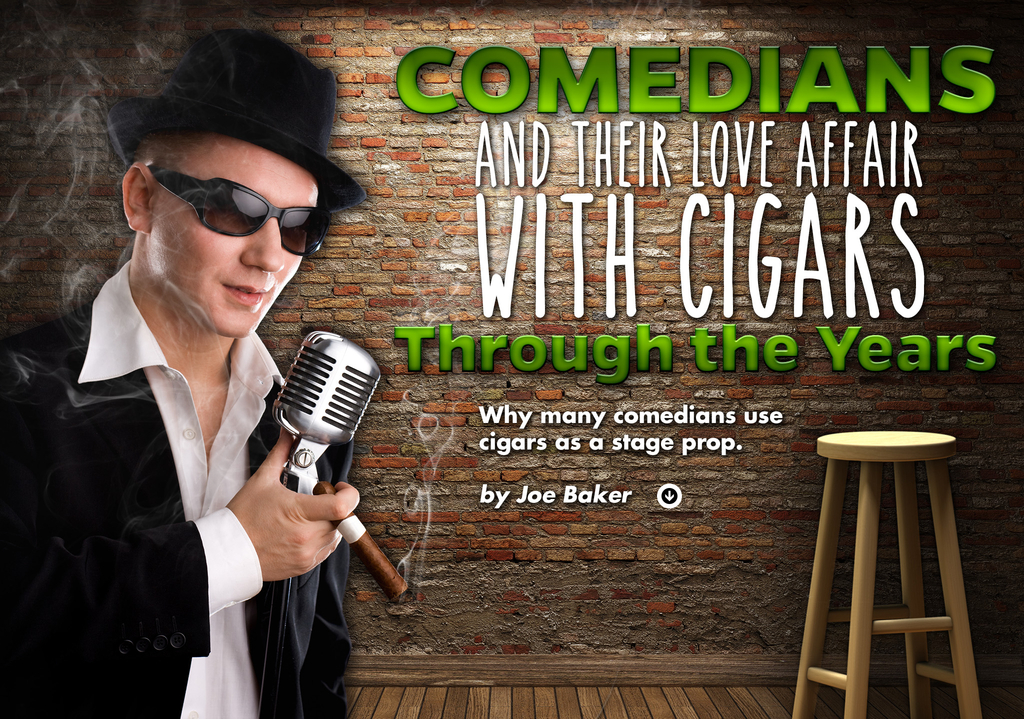 Comedians and Their Love Affair with Cigars Through the Years

Comedians. They’ve been entertaining us for centuries. How long have they been entertaining us? Well, you can go back to medieval times when Court Jesters performed for kings of Olde. While they may not strictly be categorized as “comedians” they did offer comic relief. Throughout history you will find men who performed in these types of roles. Fast-forward to the 20th century, and you will find what is the modern day rise of “the comedians” and their love affair with cigars.

Take Charlie Chaplin for instance, the actor, comedian, and director of silent films. Later, in his 1931 masterpiece City Lights, Chaplin played his character “The Tramp” and used a cigar as a symbol of the upper-class in one of the film’s funniest slapstick scenes. From there, you could go to Groucho Marx, who was rarely ever seen without a cigar. Groucho is quite possibly the most famous and loved of all the comedians who smoked cigars. One of Groucho’s famous quotes, “A woman is an occasional pleasure, but a cigar is always a smoke“ is an underlying tell at just how much he truly loved cigars. For Groucho, who started in Vaudeville, it wasn’t just shtick. In fact, Groucho’s first wife hated his cigar habit so much she demanded he quit smoking or find a new wife. Groucho chose divorce.

There are a number of other comedians who played the Vaudeville circuit during the 1930’s, like George Burns, originally a “song and dance man” who smoked cigars on a regular basis. It was the perfect prop. Cigars were popular and gave the person holding one an air of sophistication.

Then came the golden era of motion pictures during the 1940’s and 50’s. This may sound strange, but Lucille Ball comes to mind, the red-headed comedic wife of Ricky Ricardo (Desi Arnaz, a native-born Cuban) on the I Love Lucy TV series. On more than one occasion off the set, she could be spotted with friends smoking a cigar. A famous photo shows actor James Mason giving both Lucy and Desi cigars on the set of their show. A plethora of other comedians during that period could often be seen with a cigar in-hand. Comics like Bob Hope, who may not have been a “regular” cigar smoker, was often seen smoking a fine cigar with his Hollywood friends or in his hometown of Cleveland, Ohio.

Then you have Milton “Uncle Miltie” Berle, who was rarely seen without a cigar. Berle used to carry two cigar cases: one filled with Havanas for him and his friends, and another with cheap, machine-made cigars for strangers or those he didn’t care for.

Ernie Kovacs, an early television pioneer and comedian, was a spokesman for Dutch Masters cigars because they sponsored his TV show. But in real life, Kovacs, like most of his peers, preferred Cubans.

Of course, no article on cigar smoking comics would be complete without George Burns, whose career spanned Vaudeville, radio, film, and television. George was also never seen without a cigar, and in later years he used a tip for his smokes. Burns smoked 15 – 20 cigars a day. In 1994, during one of his last interviews Burns was asked what kind of cigars he smoked, and replied, “I smoke a domestic cigar. It’s a good cigar. It’s called an El Producto. Now the reason I smoke a domestic cigar is because the more expensive Havana cigars are tightly packed. They go out on the stage while I’m doing my act. The El Producto stays lit.“

Speaking of quotes, one of his most famous was, “If I had taken my doctors advice and quit smoking when he advised me to, I wouldn’t have lived to go to his funeral.” Another favorite is, “I would rather be a failure at doing something I love than be successful at something I hate.” It’s clear George was able to combine two of the things he loved, comedy and cigars, and was a success at both. When he finally passed away at the age of 100, he was laid to rest with three cigars sticking out of his suit pocket.

If you grew up during the 1980’s, you may remember the hit TV series, The Cosby Show. Debuting in 1984, comedian Bill Cosby, who played Dr. Heathcliff Huxstable, made us laugh for eight great years. Though he’s given them up in recent years, Cosby loved cigars, and like some comedians before him, would smoke them on-stage. His favorite cigar was the Ashton Maduro No.60. Some photos of him from the 1960’s show him lighting-up. One story about Cosby took place during the 1994 Olympics. As Bill was watching Tonya Harding during the figure skating competition, he became so enthralled, he picked up his cigar and placed the ash end of the cigar in his mouth!

As you enter the 1990’s, you don’t have to look very far to find another famous comedian who, to this day, gives us late night laughs. David Letterman, who was a frequent guest, and later a guest host on The Tonight Show Starring Johnny Carson, worked his way up the comedy club circuit and eventually landed his own show, Late Night with David Letterman. While he never used a cigar as a prop during his standup act, it’s widely known that Letterman was an avid cigar smoker; so much so that he frequently partook of a cigar during the commercial breaks. However, since his heart surgery, he has cut down considerably.

Today, we have what could be the last of the great cigar smoking comedians, Ron “Tater Salad” White. For two decades, Ron was a struggling comedian playing clubs in his beloved state of Texas. In 2000, he got his break when he signed on to the Blue Collar Comedy Tour with Jeff Foxworthy. It was there that America fell in love with his southern drawl and exceptional story-telling skills. It’s really more than his perfect timing and story-telling. Ron is never seen on stage without two very important items: a glass of scotch and a cigar (usually a Davidoff White Label). It’s safe to say that, if Ron was just starting out now, compared to thirty plus years ago, his routine would look a lot different. The anti-smoking fascists today would make sure of that. One reason Ron has been able to get around the non-smoking venues he plays may have much to do with the fact that he is already so famous. Ron has even been quoted as saying some venues require that he “have a firefighter standing watch” as he smokes during his routine. For many clubs, White has to list his cigars as “props” to get around the bureaucratic bullshit.

So, have we seen the last of the great cigar smoking comedians? Perhaps. When Ron White decides it’s time to pack it in and retire, for the first time in over a hundred years we will have a generation that’s grown-up without a comedian who uses a cigar as part of his act, or worse, the freedom to smoke a cigar as he or she entertains us. Now that would be a tragedy.

Amen to that, brother….a tragedy indeed!!!

Joe works as a cigar critic offering his views on the finer things in life. His articles have been published in a variety of magazines and online blogs. In addition, he is an author and enjoys writing about his experiences as an outdoor guide. When not writing, he can be found spewing his musings on twitter at @RealJoeBaker