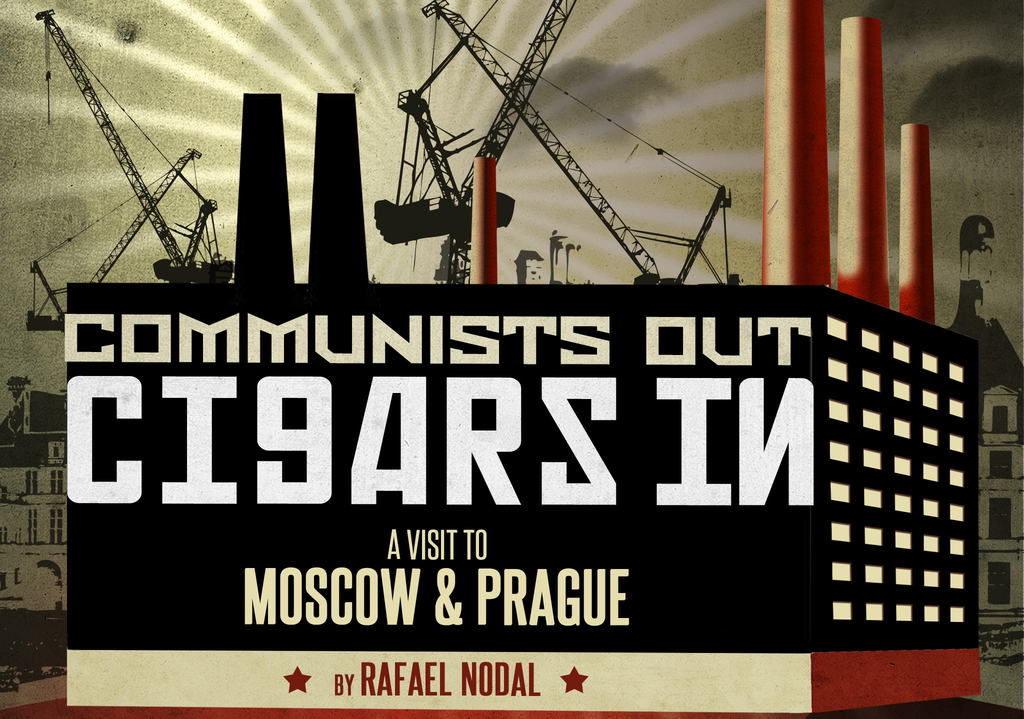 If you have read any of my other articles on CigarAdvisor, you know that I love to travel, be it following the footsteps of Ernest Hemingway around the world, or finding new markets for my premium cigars. You may also know that I was born in Communist Cuba, and that I came to the USA in 1980. In Cuba there is no freedom to buy a plane ticket or travel freely like we do here in this great country. This is probably the main reason I love to travel. It is great to be able to visit new places and learn new cultures, but for me it is also a sign of freedom. I have some friends born in this country that never had a passport. They never needed it. I tell them that they are taking for granted one of the freedoms for which our forefathers fought.

Of all the places I have visited, some of the most interesting for me are the countries in the old Communist Bloc of Eastern Europe. These are countries that have suffered a lot throughout history, whether by the Nazi occupations, Communist dictators, or the devastation of World War II. We take a look at the current state of the Eastern Europe cigar market.

Between the demise of the wall in East Germany and the fall of the Soviet Union, the former Communist countries have flourished and along with them the Eastern European cigar market. It has not been a smooth ride to say the least, but then again, it has taken America over two hundred years to have the freedom that we currently enjoy (and some might argue that we have a long way to go).

I have been fascinated by the struggles that these former Communist countries have faced on their road to a free market economy and democracy. Especially knowing that Cuba will one day (and hopefully soon) face the same challenges.

All of the above aside, I have discovered one interesting fact that you won’t find in any book on Economics or an article about Democracy in these countries: It’s the growth of the premium cigar industry. Yes, during their Communist eras, these countries had Cuban cigars. You had an industry dominated by Communist Cuba and their respective Communist dictators. A Dominican, Honduran or Nicaraguan cigar was all but impossible to find. Yet today, there are entrepreneurs in these countries importing and marketing premium cigars all over the former Communist countries. One reason for this is, East European consumers read international magazines or follow the cigar trends on social media, and have created a demand for the cigar brands that are now popular in the United States.

Who would have thought that in Eastern Europe, the Communists would be out and premium cigars in? For someone like me, who makes cigars and was born under a Communist regime, these are truly exciting times!

Prague is an amazing city with marvelous architecture and an illustrious history. Prague, the capital of the Czech Republic, not to mention the political, cultural, and economic center of Central Europe during its 1,100-year history, is known as “the Paris of Central Europe.”

No visitors to Prague should miss seeing Prague Castle or taking a stroll across the Charles Bridge, or the city’s beautiful narrow streets. The Old Town Square is a must to fully appreciate the city’s rich and varied architectural styles, like the Gothic style of the Týn Church, or the Baroque style of St. Nicholas Church. My favorite is the Medieval Astronomical Clock which dates back to 1410 on the side of the Old Town City Hall. That 600 year-old clock still works perfectly, yet here am I fixing my computer every two months.

Due in part to the Czech Republic’s continued rising prices of cigarettes, the consumption of cigars has not only increased, it’s brought a wider variety of cigars to choose from as well.

I was also impressed by some of the plush cigar lounges in Prague, including the Cohiba Cigar Club and the Cigar Bar in the Hotel Boscolo, where I stayed during my visit. Every night I enjoyed a cigar in this luxurious cigar lounge that stocked a great selection of fine brandies and cognacs.

The Cohiba Cigar Club is situated in the center of Prague inside the Bodeguita Del Medio Restaurant-a more luxurious replica of the original Bodeguita Del Medio in Havana, Cuba). This cigar bar is classy with a décor made of rich-looking wood walls, original wood ceilings and the humidor has an extensive selection of cigars from around the world, including Nicaragua, Honduras, Dominican Republic, and of course, Cuban cigars.

Visiting Russia was an experience I can only describe as incredible. Standing in Red Square in front of the Kremlin, I remembered as a young student in Cuba having to watch hours and hours of the military parades in Red Square as the Soviet Union and their leaders displayed their military might. Now, here I was in the middle of what had once been called the “Evil Empire,” and I was meeting ordinary people that wanted nothing more than to smoke a good cigar.

Moscow has been the capital of Russia and of the former Soviet Union. Today it is the major political, economic, cultural and scientific center of Russia. With 11 million residents, Moscow is also the most populous city in Europe and 5th in world population. According to Forbes, Moscow has the largest community of billionaires in the world, and from what I observed, they all smoke cigars.

The Moscow Metro is one of the deepest underground transit systems in the world, third only to Tokyo and Seoul in terms of passengers. No visit to Moscow is complete without riding the Metro and experiencing the rich and varied architecture of its station stops.

Red Square is a must for any visitor to Moscow. It offers a great view of the Kremlin, once a medieval city-fortress that today serves as the residence of the Russian President, and includes the iconic St. Basil Cathedral.

The premium cigar industry in Russia is vibrant, with luxurious cigar lounges that stock many of the cigar brands that you would find in The States, including Cuban cigars. What I’ve discovered during the last five years I’ve been visiting Moscow is, Cuban cigars have continually been losing their market share. Presently, Russian cigar consumers will often prefer good Dominican, Nicaraguan, or Honduran imported cigars to Cuban cigars.

I have also had the good fortune to participate in two of Cigar Clan Magazine‘s events in Moscow. These functions bring together cigar consumers, retailers, distributors and international manufacturers. As a manufacturer from the Dominican Republic, this is very encouraging, to say the least.

As a result of my visits to Moscow, I have made many good friends; friends that constantly remind me that, although politically things may not be as my friends or I would like them to be, at least they can enjoy smoking a premium cigar, and in some cases, even in a restaurant. A Dominican Cigar as a sign of freedom? Go figure.