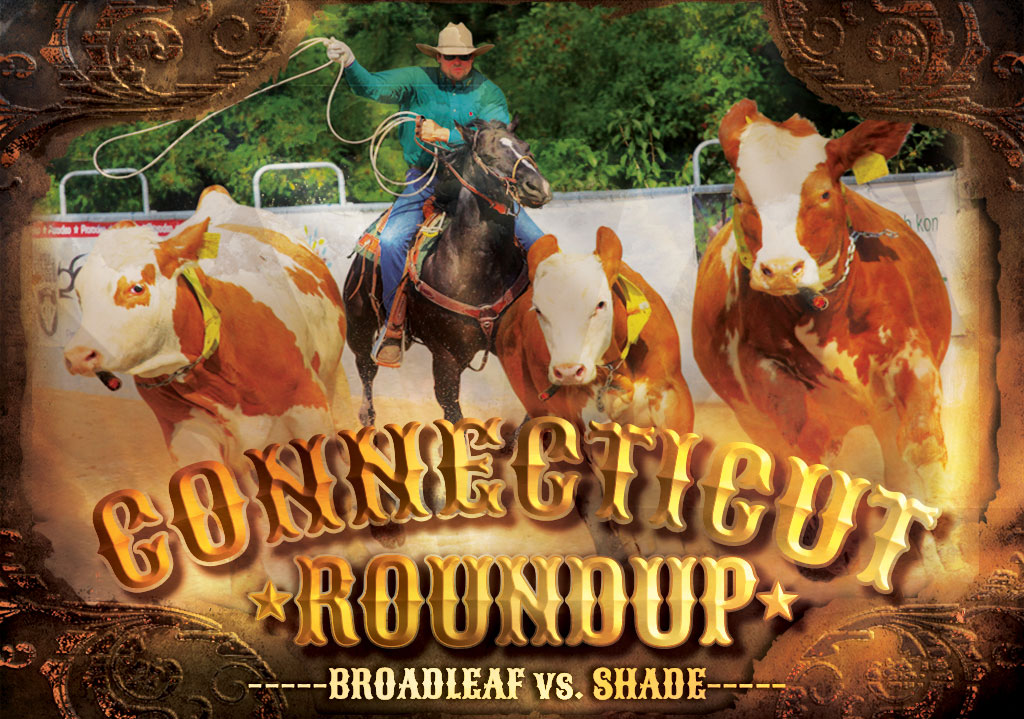 Connecticut tobacco has been grown in large quantities for two centuries. Think about that – for over 200 years, tobacco has been part of Connecticut’s agriculture backbone, supplying the premium cigar market with two of its tastiest ingredients. Drive through the Connecticut River Valley north of Hartford, and it wouldn’t be odd for you to see a field of Shade on one side of the road, and a field of Broadleaf growing right across the street – two very different plants, they could be growing just yards from each other. But for as close as they may be, they couldn’t be farther apart in taste, feel and flavor.

These two types of Connecticut tobacco get different treatment in the field, too: Broadleaf plants are topped (meaning the flower on top is snapped off); because the plant realizes it can’t produce seed anymore, the plant puts all its energy into producing big, thick and heavy leaves with very pronounced veins. The flowers on Shade plants get to bloom, because the grower is looking to get that thin, flawless tobacco.

Shade plants, like many other tobaccos (Connecticut, or otherwise), is primed – meaning the individual leaves are snapped off the plant, starting from the bottom. In Connecticut, the harvest is usually done three leaves at a time, every seven to ten days; the workers normally do five or six primings, for a total of 15 to 18 leaves.

Broadleaf is its own animal, however. Broadleaf started life as binder and filler, but now is also in high demand for wrapper – producing intense flavors and bold smoke. It’s grown in full sun to produce heavy, flavorful leaves that burn slowly. Instead of priming, the whole plant is taken near the base with the swing of an axe; this is why you hear the term “stalk-cut.”

As demand for Maduro continues to increase, the lighter, mellower shade leaf is said to be losing its grip on the market; Crain’s Business Newsletter wondered out loud last year whether there “may be a Connecticut industry with zero producers of shade tobacco next year [meaning 2017].” Reports of Shade’s demise is decidedly premature, evidenced by the fact that shade-grown Connecticut tobacco has been – and still is – at the top of the quality heap. Look at Macanudo: consistent, mild and creamy-smooth, the flavor is everything a grower is going for with a good batch of CT shade. Dunhill Aged is another top shelf smoke that uses the real deal, making for a decadent cigar smoking experience that leans more towards the velvety side. Same goes for Don Diego, an often overlooked example of top grade Connecticut tobacco.

If this is your flavor wheel house, these five are a good jumping off point for cigars wrapped in Connecticut Shade:

The embodiment of Dominican luxury, the bar is set high – and it’s why the Connecticut wrappers come from a small farm that’s devoted to supplying the leaf for just 2 or 3 brands, Montecristo included. Nothing but the best because, well, it’s…Montecristo. Smoke it, and you’ll see why Connecticut Shade has cultivated such a renowned reputation.

Normally, a CT shade wrapper starts hiking up the price on any premium; that flavor comes at a cost, as you know. But Don Tomas bucks convention with this smooth-smoking Special Edition Connecticut: first, it’s a special edition smoke for the price of an everyday burn. Second, it features a genuine, U.S.-grown Connecticut Shade wrapper atop the Dominican-Mexican-Nicaraguan long filler blend. Mild-medium, with creamy and toasty flavors. It’s a warm, not bitter, smoke.

As I mentioned, no surprise that you’re finding real-deal Connecticut Shade wrappers on many of the finer humidor selections…and it’s up here on the top shelf, that we find Ashton Cabinet. Again, mild-medium – and again, crafted with select aged Dominican tobaccos under the Connecticut Valley’s finest. Creamy-smooth, because this Ashton is aged a full year after it’s been rolled in the DR. A treat, for sure.

If you have yet to step up to the plate with an AJ-made cigar, the time is right…New World Connecticut breaks from Fernandez tradition of big n’ spicy, combining aged Nicaraguan & Brazilian long fillers with a Mexican San Andres binder, all under a true U.S. Connecticut Shade leaf. Mellow, creamy and mild – yes, a radical departure from his usual recipes, but the New World CT falls into just about any smoker’s wheelhouse.

Not all Connecticut Shades are mild. Evidence: Rocky Patel Vintage ’99. The aged Dominican & Nicaraguan long fillers make the difference here, adding some toasty intensity and aroma while keeping the smoke thick, creamy and slightly sweet. The vintage CT wrapper is the cherry on top. An “accessible” smoke for newcomers, this is a Rocky that may make even the veterans rethink the move to full-bodied cigars.

Now to the Broadleaf…thick and juicy, it adds a punch of flavor and body that can take a blend to another level. On any given day, the INCH by EPC is a hearty smoking adventure; but when Ernesto Perez Carrillo gives the Inch blend a Connecticut Broadleaf wrapper, it’s a smoother, medium-to-full cigar. Smoking the Oliva Serie G Maduro is a similar experience, where this dark and oily Connecticut leaf takes this cigar from good to great. Broadleaf is no secret, however, as it’s used to great effect on the classics – like Hoyo de Monterrey, the spicy-sweet Onyx Reserve, and the uber-full bodied Henry Clay…Saint Luis Rey Serie G uses it as a wrapper and a binder, giving this true “double Maduro” a flavor that’s extra rich. Want some more Broadleaf ideas? Start with these:

Like father, like son…a Pepin family affair, the Reserva Especial combines an all-Nicaraguan recipe of long fillers under the rich, sweet taste of Connecticut Broadleaf. Hearty is an understatement; big earth notes are tinged with spice, plus a component that reminds you of coffee – or maybe cocoa. Intense, and worth it.

You might think that the Liga Privada No. 9 would be the standard-bearer for Drew Estate broadleaf cigars, and you would be right…but not to be missed is Nica Rustica, in all of its rough-hewn glory. The Broadleaf wrapper has a (ahem) rustic look; the flavor is straight fire, smoking raw and full thanks to the San Andres Negro and Nicaraguan tobaccos underneath. Nica Rustica does nothing to dispel the notion that Maduro cigars are strong; it is, and adds some spicy-sweet notes to complete the package.

CroMagnon from RoMaCraft exhibits everything beautiful about Broadleaf: oily…toothy…dark…rough around the edges, it is perfect in its imperfection. As for taste? Brace yourself for full and complex flavors, by way of an all-Nicaraguan core touched with Cameroon. The aroma is impeccable, and just a true joy to burn; CroMagnon is a Connecticut tobacco treat that’s not to be missed.

I’m thinking the R stands for “robust.” And why shouldn’t it? This La Gloria packs in the heavy stuff, a blend of Nicaraguan Ligero and Dominican Olor that’s wrapped in the genuine article: oily, U.S.-grown Connecticut Broadleaf Maduro. The surprise: this LGC smokes smooth with an ample aroma. A favorite, especially because of the big ring sizes.

The graybeards around these parts will tell you everything you need to know about Broadleaf in two words: Sancho Panza. An old-school smoke from Honduras, Sancho Panza was the whole package before there was such a thing…a 3 nation blend (Honduras, Nicaragua, Dominican) is done in a double Maduro (binder AND wrapper), where the capa is a Connecticut broadleaf aged 4 years and cured to a super-dark Oscuro color. Full bodied and delicious; we’ll leave it at that.

There are so many cigars made with great Connecticut tobacco that it pains me to keep my list at just five of each…I could easily do 25, and still be scratching the surface of great smokes. So if you want to tack on a recommendation for a good Shade or Broadleaf wrapper cigar, here’s your chance – comment below!

Only the Montechristo Classic and the Vintage line still use USA Connecticut Shade. The “little farm” now grows only Broadleaf. Nearly all other Altadis “Connecticut Shade” wrapped cigars use the cheaper, inferior Connecticut Seed grown in Ecuador. Buyer beware

Opinion Connecticut Vs Ecuador wrappers outside of price ??!