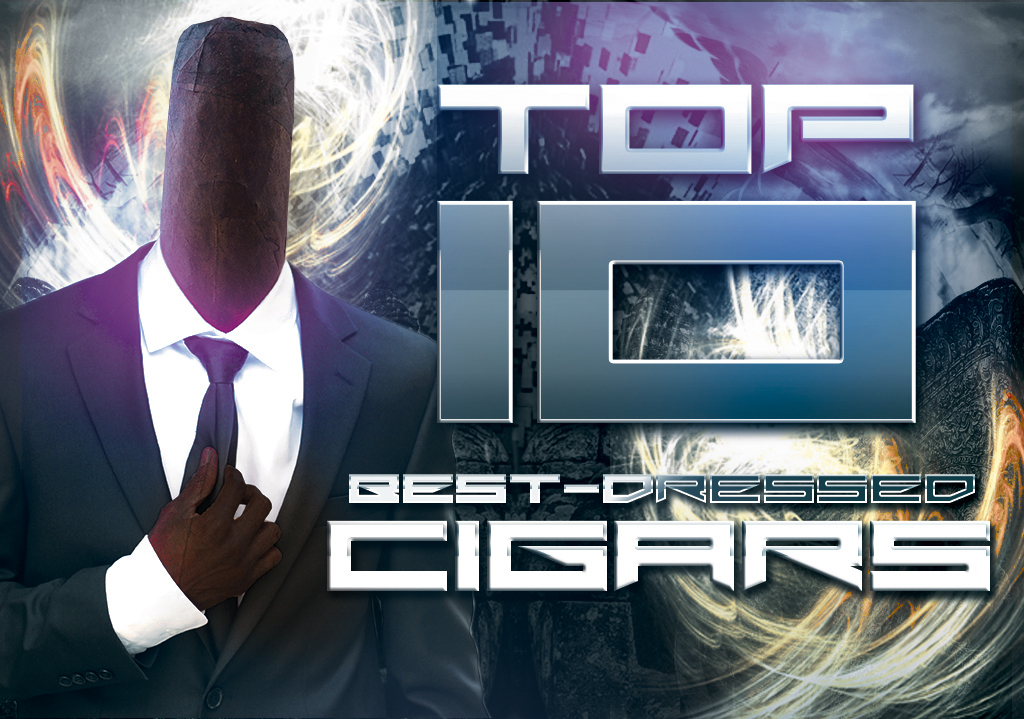 I love Halloween because I get to dress in an awesome costume and hit on the countless women dressed as some of my favorite female superheroes from every comic book ever. I can’t name them because of dumb copyright laws, but I’m sure all the ladies love my befuddling charm and grace, as I’m dressed as a certain beer mascot from a TV show featuring America’s favorite yellow family with a pesk-ittily-esky neighbor.

See how I skirt around copyright infringement? I’m a wordsmith, you see.

But just as I try to make every lady’s heart melt into a radioactive stew like Chernobyl, cigar manufacturers try to send the saliva glands of every customer’s mouth into overdrive with some pretty kick ass cigar bands. So based on sheer impulse as I walked around our massive warehouse, getting lost a few times in the process and having to rely on sheer instinct to survive, I have picked out my top ten “best dressed” cigars on the market. These cigar bands are either bold and awesome, or elegant and welcoming – but all of them are the coolest looking in the store.

To kick off the list, I’m going for the newbie on the market. Only 1,000 boxes of the CAO Amazon Basin are being made, since the tobaccos are grown in the middle of the last remaining half acre of the Rainforest. Now, I know, the Amazon Basin’s band doesn’t have the 4 horsemen of the apocalypse, but for the sheer simplicity and curiosity of it all, I have to place it on my list of best dressed cigars. It just goes to show you don’t need a team of designers to come up with a cool head-turning concept for your stogie. Sometimes all it takes is an extra piece of tobacco.

For reasons beyond the comprehension of this writer, there has been an influx of cigar bands wrapped around two sticks lately. For all intents and purposes, I will simply call this phenomenon “Double Packaging.” But these bad boys are Barber Pole wrapped cigars. Mix that with the subtle yet menacing black and red band, and you got a whole new type of packaging. You got what I will dub “The Double Deuce!” Joined at the band, these tobacco twins give you a double shot of the incredible flavor Camacho is known for, while looking completely badass. The color scheme is synonymous with “El Diablo,” and I can vouch firsthand that this cigar is devilishly good.

[Ed. Note: Camacho Double Shock cigars are limited edition, and are no longer in stock at Famous Smoke Shop; click the image to view other Camacho cigar options.]

I’m pretty sure the inspiration of this stogie’s band comes from a similar tale to having the sun blast through your window on the weekend, waking you up at an ungodly hour after a vodka and hops fueled night of debauchery, causing you forgot to shut the blinds the night before. The sun can be a cruel bitch. But since we’re talking about badass cigars, I have to include the Red Screaming Sun. The gold winged shield and skull, all draped over a freshly-spilled-blood red background and encasing a reddish-brown cigar, it’s perhaps the most complementary band a cigar has ever known. Aesthetically, this is a masterpiece. 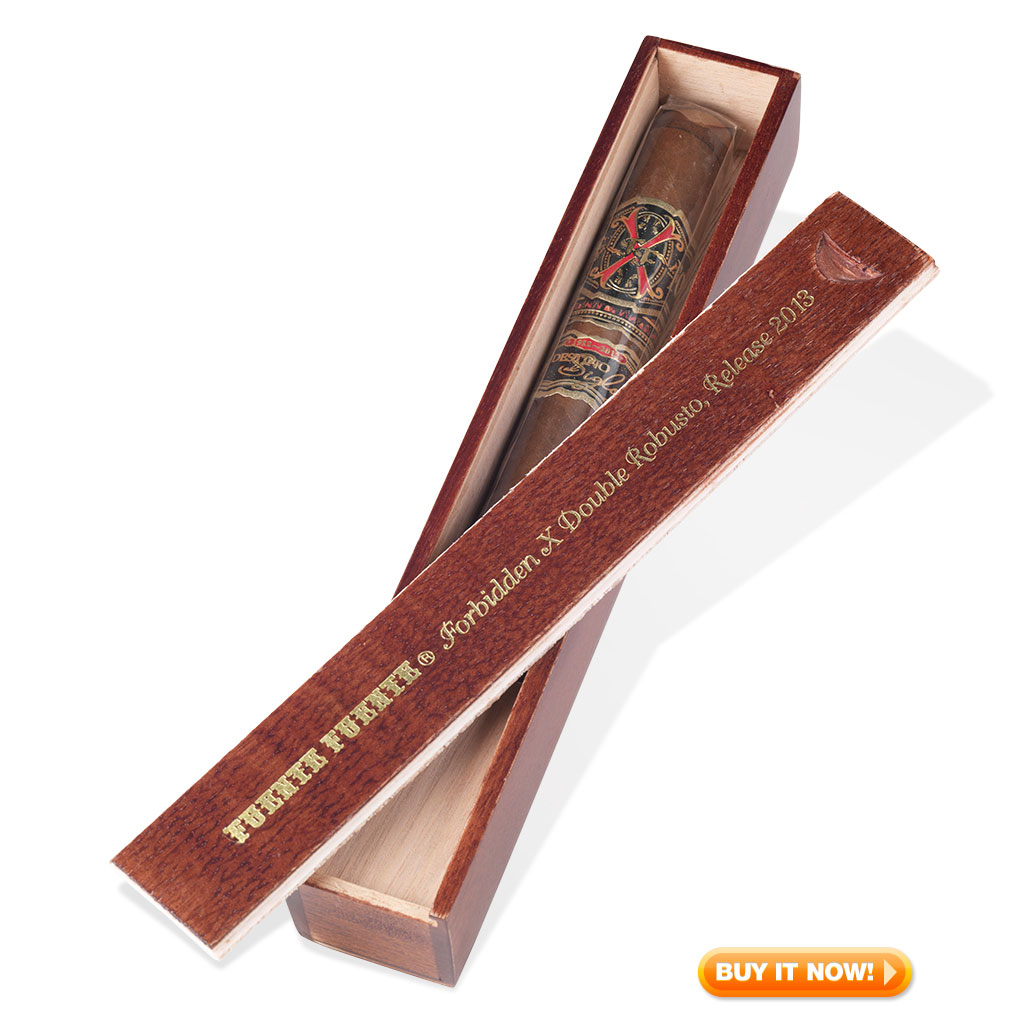 Cigars this bold undoubtedly deserved cigar bands that make just as big of a statement. It’s the classic Fuente Fuente Opus X symbol we’re used to, only it traded in its red background for a more complementary black. Under it are some flames. No, not like the shitty flame decals your cousin Gerald stuck onto his brand new, pre-owned, epically “modded,” ‘99 Neon. It’s probably the most prime example of a powerhouse I’ve ever smoked, leaving my eyes blasted open out of sheer amazement like a Tarsier.  But to be honest, anything with flames on it makes a solid case for my list of best dressed cigars. Hell, I’d put an empty soda can on this list if it was on fire.

Matt Booth’s mind works like an M.C. Escher print. His creative genius comes to a head with the Room 101 Namakubi. Namakubi, for those of you who don’t speak Japanese, means “freshly severed head.” So it goes without saying that a cigar with so much crazy meaning and Samurai tradition behind it deserves a band with a full-on Kimono. It looks like the cigar is ready to cut into your palate and unleash a world of hurt. But that’s where Matt Booth steps in. The flavor profile puts you on the giving side of a severed head, instead of taking a sword to the neck, with a band that screams “awesome.”

There are a lot of crazies out there in the world, and we put them on a shit load of pills to try to level them out. Nobody ever thought to give these people a cigar? They’re enjoyable, relaxing, and put people’s minds at ease. If you light one up and it doesn’t do the trick, you might be a legit psycho, in which case, stay far away from me. I don’t want to be around when you start murmuring “redrum” as you’re walking down the street.

But the Psyko Seven is just what the doctor ordered with a band designed after a prescription pad. And what’s better than self prescribing some meds? Nothing, that’s what. The prescription pad is a really neat concept. Cigars are relaxing in nature, and these guys were able to take that concept, and run with it. Kudos on the awesome job. Just don’t try to take it to your local pharmacy.

There’re two reasons this stogie is on my list. First, it comes in a spark plug box which is pretty cool and speaks to gearheads around the world. Second, it has a classic old-school metal piping design around the band, which is synonymous with classic cars. Again, it screams to gearheads the world over. Let’s face it; if you like cigars and cars, you’ll like the CAO Flathead. Maybe I’m getting nostalgic here, but it reminds me of when my grandpa used to take me to Sammy’s Ice Cream Shop for Cruise Night to check out all the classic cars. If it weren’t closed, I would still be going to Cruise Night chomping down on one of these short smokes.

If you haven’t noticed, I have a thing for black and red colored bands. It’s an epically menacing color scheme, and it’s very fitting for any cigar band that tries to give the impression of badassery. The Judge is no different. The bearded man with long hair, aiming a gun straight between the eyes as you gaze upon the portrait; it’s incredible. The Judge may be the lesser known cigar of this entire list, but it certainly wins a massive amount of points in the “best dressed” category. If you haven’t had the joy of smoking one yet, it’s time you picked some up. They’re just as intense as the band. You won’t be disappointed.

Let’s get a little classy here for a second. All of the cigars on my list so far have either had an awesome theme, or would be synonymous to a fright filled Halloween costume contest. But now we’re going to introduce the Bin No. 1, which holds no place in a Halloween costume contest. No, this stogie fits in better in a masquerade ball. It’s pure elegance presented on a giant cigar band. The mask it wears to the ball is elegant and perfectly describes the smoke as smooth, flavorful, and high end, but underneath the mask stands a blue collar price point.

Last on the list is the La Sirena Sea Sprite. And right off the bat, no, it doesn’t taste like the lemon-lime soda we’re all so fond of. No added sugars, carbonation, or preservatives make this all natural stogie one for the ages. But the band is a story unto itself. Just like a siren of the sea, the band simply speaks to you. It draws you in closer and closer until it has you in its grasp, and then it strikes just like the match you light it up with. The band is ornate with a blue background and silver piping and a tempting mermaid as a central theme. If you want to talk about classy and upscale bands, this is the cream of the crop.

So there you have it. My top ten best dressed smokes, sporting the coolest looking cigar bands. Now I understand a few of you will become keyboard warriors and fight me tooth and nail with comments on my list. Keep in mind; this is only a list of ten cigars. My original list had around 20 cigars listed, but for the sake of space, I had to cut it down. It’s really hard to boil down a list like this with so many options to choose from in a warehouse filled with millions of cigars. If you want to tip your cap to a cigar with an epic band, simply tell us what YOU think should be on the list in the comments below! As always, happy smokes.

How could you miss the Macanudo Maduro ? Or is this blog just advertising ?

You’re correct. It was the vintage with the metal band I was talking about.

fratello is not an ordinary band….my 1st experience of a V shaped band.

I think the Gurkha Ghost, with it’s very Classy black and silver band, definetly beat out the Flathead and probably a couple others you have mentioned. I also think Foundry with it’s metal “rings” should be here somewhere!

Reading Time: 4 minutes Gary goes one-on-one with the Hoyo de Monterrey Epicure Selección No.1: while it looks very much like a Cuban Hoyo at a glance, this artisanal, all-Honduran Corona Extra dances to its own special beat. Want to know who’s in the band—or more accurately—what’s beneath it? Check out this review now.