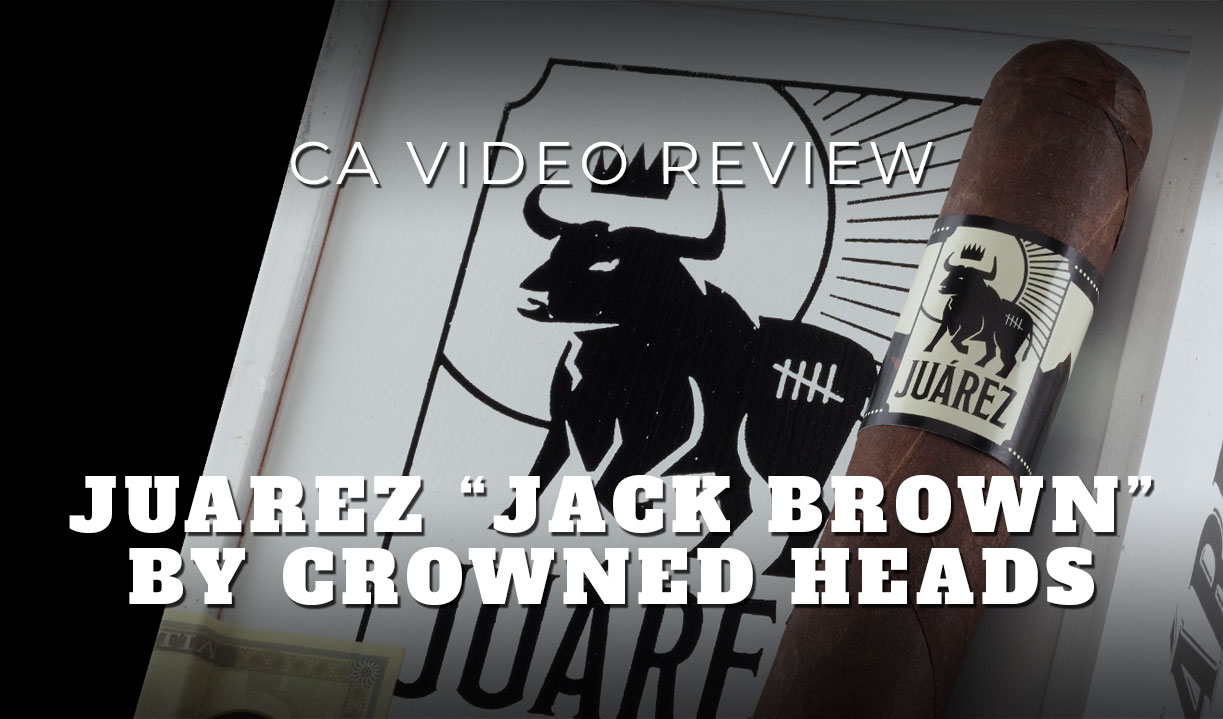 Juarez Cigars by Crowned Heads – the Back Story

For Juarez, Crowned Heads co-founder Jon Huber wanted “to create a value-conscious alternative to our Jericho Hill brand.” In fact, both cigars share a commonality; they were inspired by Johnny Cash’s rendition of “Cocaine Blues.” This Easter egg adds to a long list of musical ties found in the fittingly-Nashville-based company’s portfolio of artisanal cigars.

Crowned Heads’ National Sales Manager, Miguel Schoedel, told us: “The price point is very accessible to all smokers, and if you haven’t tried Crowned Heads yet, it’s a great way to introduce yourself to the brand.” He added, “Jon [Huber] says it best: the blend punches way above its weight in price.”

To achieve what they wanted, Crowned Heads collaborated with a relatively obscure partner: Tabacalera Pichardo in Estelí, Nicaragua. The factory is overseen by Don Eradio Pichardo, a third-generation Cuban tobacco farmer who was a student of the late master blender, Arsenio Ramos of Casa Fernandez and Aganorsa Leaf fame.

“We had been working behind the scenes with Tabacalera Pichardo in Estelí, Nicaragua on some blends since 2016, mostly just for fun,” said Jon Huber, but as time passed and more and more samples were delivered, we became very impressed with the quality and felt there was certainly potential in working with that house.”

The Juarez blend features a bold core of Dominican and Nicaraguan tobaccos, an Ecuador Sumatra binder, and a dark Mexican San Andres Maduro wrapper. It’s presented in boxes of 20 cigars, 5-packs, and singles in the following sizes:

Construction: Well-constructed. Invisible seams. The wrapper is quite oily and dark (which I love) and has a small imperfection near the foot.
Draw: Superb.
Pre-light flavor: Fruity, tangy, and just a drop of spice.
Toasting & Light: Toasty, with salted nuts.
Base flavors: Burned popcorn, nuts, sweet wood, and spices that tingle on the lips. Plus: caramelized sugar at the two-inch mark. Some black coffee notes at the halfway mark, too.
Retrohale: Big emphasis on the burned popcorn note. Pleasantly warm spices that don’t burn.
Aroma: Buttered popcorn.
Burn & Ash Quality: Burns evenly with a tarnished look to its ash.
Balance of flavors: Nicely balanced, with a healthy amount of sweetness.

First, some interesting trivia. Crowned Heads’ Miguel Schoedel gave us some insight on Juarez’s band. The mountains in the background are modeled after Mexico’s San Andres valley – echoing the cigar’s wrapper. The bull itself is another reference to Mexico, but the tally marks on its thigh play into the Johnny Cash At Folsom Prison theme: mimicking the stereotypical lore of inmates marking years spent behind bars on their cell walls. The bull’s crown…that should be obvious.

The cigar starts out with some toastier notes over a base of salted nuts. From there, I quickly noticed a flavor that reminded me of burned popcorn which was heavily amplified through the retrohale. There were notes of nuts, sweetness, wood, and spices that kind of tingled on my lips like chili peppers. 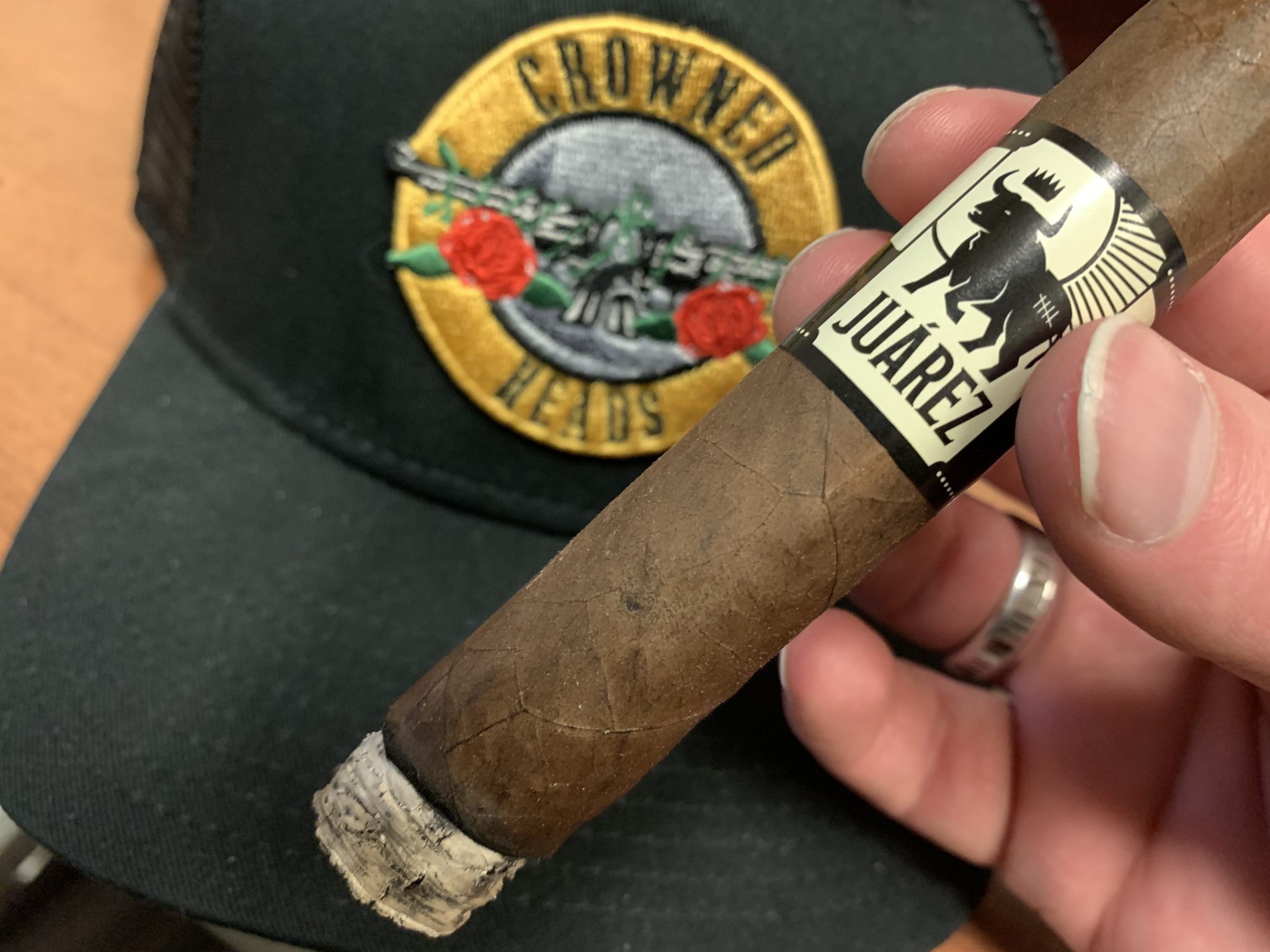 At the two-inch mark, the smoke had lost its tingle, making way instead for a big note of caramelized sugar on the finish. Later on, at the midsection, there was a flavor of black coffee that stuck around for a while. The retrohale was surprisingly smooth, and kind of outside the Crowned Heads playbook in my opinion. Juarez was warm instead of fiery. In a word…pleasant.

Throughout the rest of the smoke, Juarez remained consistent. It had small changes here and there, but the things I loved about the cigar stayed in place. I’d recommend this as a first crack for anyone who’s been considering giving Crowned Heads a spin. It’s a doorway into what you can expect from them without being as potent as their standard fare.

My samples (both off and on camera), started with a blast of sugary sweetness and some light salt, accompanied by a sweet cedar note. Chewy, medium-bodied smoke rolled out of the head with ease, leaving a long, peppery finish that rounded-off within the first half-inch. Balanced flavors of leather, caramel, and cedar remained active for most of the early action.

By the cigar’s midsection, the balance and medium body remained steady, while the strength of the cigar fell squarely into the medium range. The cigar continued to deliver a blitz of creamy smoke, and suddenly. . . the flavors began trading places. The caramel and sweet cedar began to push the peppery spice out of the frame. Farther along, I picked up an interesting hint of tangy citrus that reminded me of lime. The pepper returned for a short monologue, as the ribbon of sweetness continued to tie it all together.

The final stretch offered a heartier smoke that nudged its way into full-strength territory, but the body remained just shy of full. Meanwhile, the ribbon of sweetness was holding on by a thread, as the cigar began to offer more “traditional” Nicaraguan earth and spice flavors. I also picked-up another nice little surprise in nub territory—a flash of bittersweet chocolate among the earthier notes.

Suffice it to say. . . . For the money, the Juarez by Crowned Heads Jack Brown, pretty much pays for itself. For newer cigar smokers, it could be a lot of cigar for those not accustomed to wide ring gauges, while the more experienced will like its complexity. Although I think it can be enjoyed anytime of day, I suggest smoking it after work or dinner with a good rum like the Zafra Master Reserve 21 we sampled in our video. Be sure to carve out a protracted, uninterrupted time frame to get the most out of Mr. Brown.

I’ll cut right to the good part…I found very few cigars at this price point to smoke with this much complexity.

After Juarez starts off with those sweet flavors above, a nutty taste takes over as the burn settles in. So does a long-finishing spice. Strength is medium, body and flavor are full. The smoke is borderline creamy, and the number of flavors I’ve found in just the first inch or so are exceptionally well balanced. 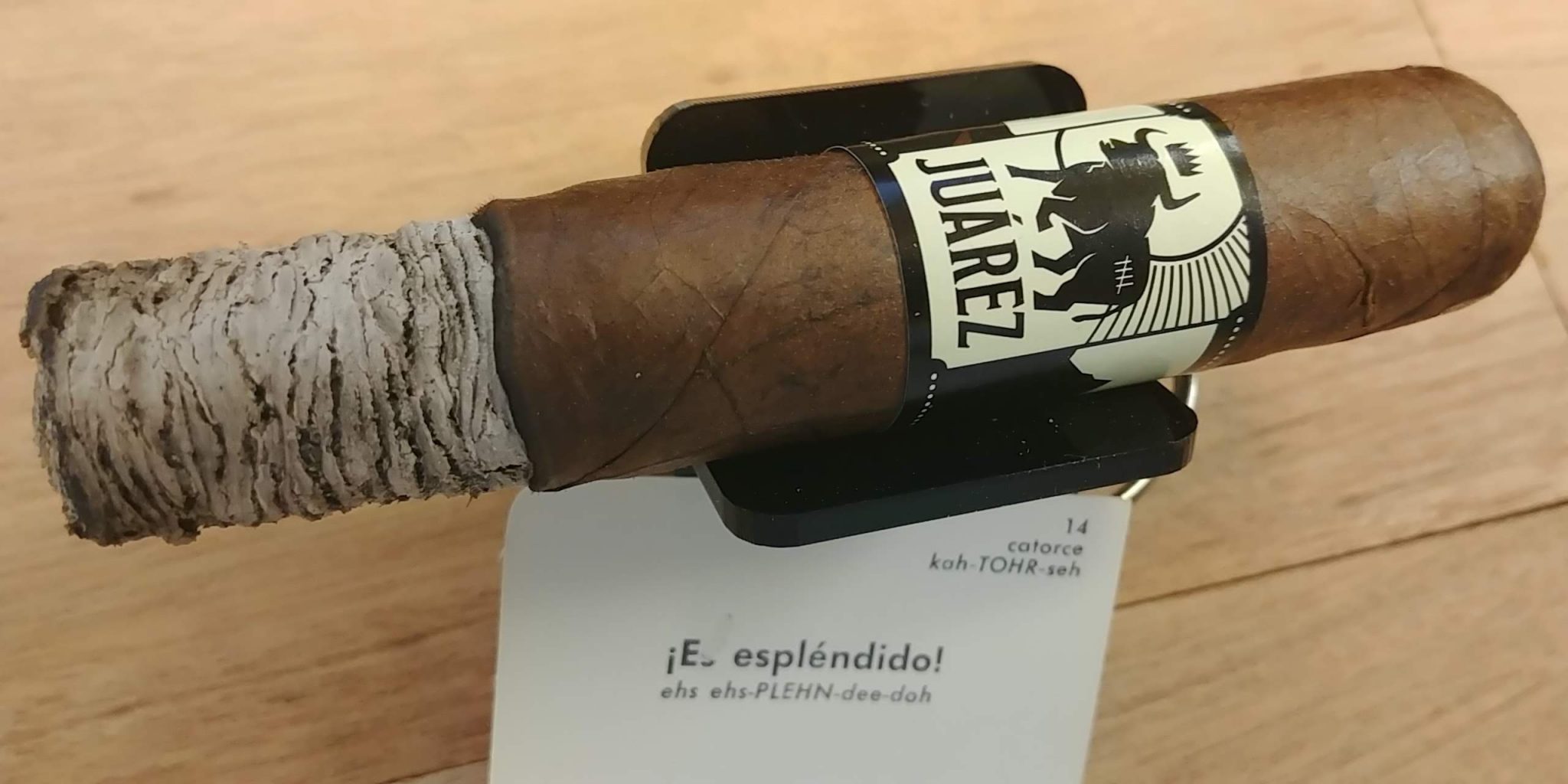 Fair warning: I’m going to go full cigar nerd here, and dig a little deeper into something I went over quickly in the video…I have a hunch about the complexity we’ve been talking about here – I think it’s brought on by the binder. And that’s a little weird to say, if you’re familiar with blending tobacco, because it’s the wrapper that has the biggest impact on a cigar’s flavor. So let me explain…

As I smoked the first Juarez sample, I went back and looked at Gary’s 5 Things You Need to Know About…Binder Tobacco. Besides being the most overlooked part of the cigar, the binder is what Gary calls, The Loneliest, Yet Hardest Working Leaf in the Bunch:

“It’s always the fillers and wrappers that get to play the leading roles of the blend. And although the binder may not seem all that important to the average cigar smoker, it’s very important to the master blender.”

It’s the binder that keeps the cigar burning evenly, making sure the tobacco combusts at a consistent rate. And the binder adds most to the aroma, but only modestly to the taste. But I think here, with the binder being a Sumatra leaf, that’s what adds those subtle waves of complexity – though technically, it shouldn’t. So that’s when I went back to my Sumatra Tobacco guide, where Ernesto Perez-Carrillo (who’s been using Sumatra tobacco forever) told me:

“To me, [Sumatra is] one of the most flavorful tobaccos out there. What I like about it is the complexity it adds to the blend.”

So whether this is just a really GREAT batch of Sumatra that Crowned Heads got their hands on, or Juarez’s wide-ranging flavor profile was a happy accident, I don’t know – but there’s a tremendous amount of complexity at play. A whole bunch of sensations ripple through at some point during the smoke: earth, zest, black (but not strong) coffee, dried onion flakes, toast, nougat, salt, tea and lime (sweet-sour). Each is noticeable, but come and go like a flash in the pan.

And no matter how many flavors show up, the smoke displays some kind of sweet quality. A pleasant surprise. As for that medium strength – Juarez gets a little sneaky and pops you with extra power in the last third. But still nubbable, ending with a clean, crisp (and short) finish.

A satisfying smoke for most palates – but I think you’ll really like it if (a) you’re training your taste buds to go the extra mile on picking up flavor nuances, and (b) you don’t want to spend a lot on a great smoke.

P.S. Let us know if you’ve taken a Juarez by Crowned Heads for a spin yet in the comments below.

One of my favorite Maduros out there! I couldn’t agree with the reviewers more. I love the complexity and how the dominate keeps changing, I might use a few different adjective to describe the cigar, but they are spot. There is a lot of ying and yang in the cigar that keeps it interesting to the last puff. Thanks for the great review.

Thanks Matthew – I agree on the Juarez. One of the best values, and all-around premium cigars out there.

Yes I have I tried the obs type the smoke an the flavor was very nice . I believe I got these on monster deals and they went real fast an also very enjoyable maduro stick .