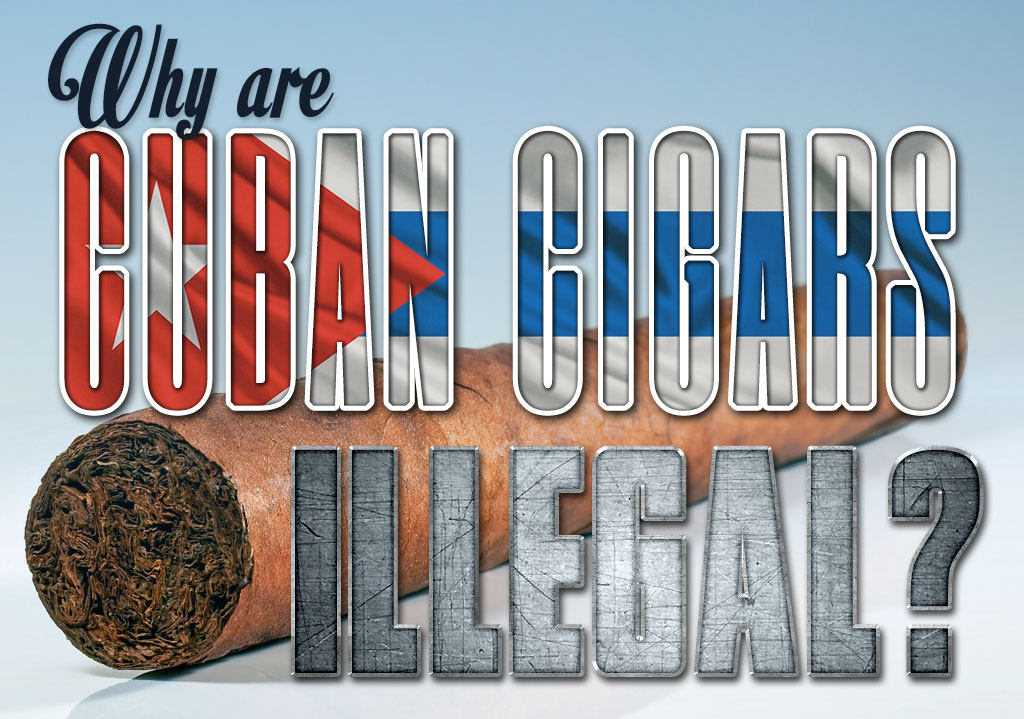 The short answer is the United States’ embargo against Cuba forbids the import of any Cuban-made products into the United States. Furthermore, U.S. law forbids American citizens from buying, selling, trading, or otherwise engaging in transactions involving illegally-imported Cuban cigars. These prohibitions apply to all goods of Cuban origin, and scofflaws face fines of up to $55,000 per violation not to mention criminal prosecution, which can result in higher fines and even imprisonment.

The worst part is that these laws make Cuban cigars illegal for Americans EVEN WHEN ABROAD IN OTHER COUNTRIES.

If this seems a bit extreme for what amounts to purchasing a box of aged leaves, you can thank Cuban-American relations, which have been frosty to non-existent since the late 1950s.

The Cuban revolution of 1959 was the result of long-brewing tensions between the Cuban working class and the government, led by President Fulgencio Batista. After serving as President from 1940 to 1944, Batista seized the Presidency in a 1952 coup d’état. While relatively progressive in his first term, he had become increasingly dictatorial and indifferent in his second. Batista worsened the situation by enriching himself through ties to American business and organized crime, and silencing the political opposition through violent means. President John F. Kennedy would decry Cuba’s government as “a complete police state.”

Shortly after the 1952 coup, a young lawyer named Fidel Castro unsuccessfully petitioned to overthrow Batista on constitutional grounds. Realizing he could not accomplish this through legal means, he founded and led a socialist revolutionary group called the 26th of July Movement, which succeeded in Batista’s January 1st 1959 ouster.

On October 19th 1960, the U.S. ceased most exports to Cuba, and on February 7th 1962, the embargo was extended to almost all imports, effectively making Cuban cigars illegal. Cuba turned to the Soviet Union, which was all too glad to engage another proxy for the Cold War, culminating in the Cuban Missile Crisis in May of that year. No one was surprised when Castro’s movement subsequently reformed and became the Communist Party of Cuba.

Meanwhile, the Castro regime’s human rights record is no better than Batista’s, with hundreds of thousands of political dissidents and undesirables killed or imprisoned over the years. Furthermore, when Castro seized power, all industries and businesses were nationalized, including the cigar industry. Their factories and intellectual property effectively stolen by their own government, many of the island nation’s best tobacco growers, processors, and cigar makers fled to other parts of the world, settling mainly in Honduras, Nicaragua, and the Dominican Republic.

Would-be purchasers of Cuban cigars should remember that not only are Cuban cigars illegal and they are taking a considerable legal risk in doing so, but they are also supporting a Communist regime that has committed large-scale atrocities and stole thousands of businesses from their rightful owners, including those cigar blends and brands. If you want to learn more about who you’re supporting when you purchase cigars from that island south of Miami check out Charlie Torano’s piece about why he feels the Cuban embargo should continue.

But in the end, it’s the quality of the cigars that should matter most. And while there’s no argument that Cuba set the standard, Cuban cigars have experienced tremendous inconsistency in recent years, thanks to poor quality control and the lack of a profit motive. Nicaraguan cigars, Dominican cigars, Honduran cigars, and other cigars from the free world, on the other hand, have only gotten better over the years, in part because cigar makers are free to experiment and to be handsomely rewarded for their hard work. Tobaccos grown in different locations do have different flavor profiles, but the flavors we all enjoy so much are created in their most exquisite forms by artisans who have mastered the craft of blending tobacco. Just as there’s no argument that Cuba set the standard for cigars, there is also no argument that the most talented, creative, and innovative cigar blenders active today are currently doing their work in Nicaragua, Honduras, the Dominican Republic, and right here in the good old US of A. Our laws make Cuban cigars illegal, but common sense makes non-Cuban cigars the obvious choice.

Because all trade with Cuba was banned. This meant that all Cuban products in the U.S. resulted from smuggling, a federal offense, this is the reason cuban cigarsare banned.

Read More
Cigars 101
Answers to more cigar questions from our readers: yellow cellos, how to critique a cigar like a pro, how to light your cigar without a lighter, and more!
Read More