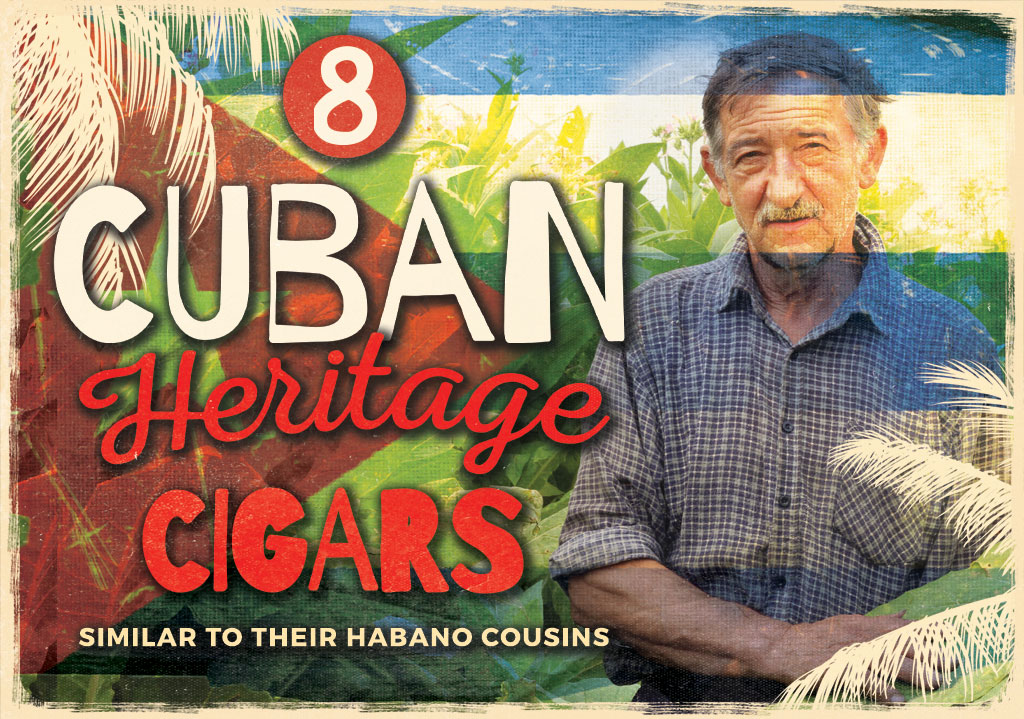 The cigar world got all jacked up when the US lifted some trade and travel restrictions on Cuba last October. But the cold fact is, you can only bring a small amount of cigars back to America, and a full embargo lift is probably still a long time off. We at Cigar Advisor are constantly asked about the sale of Cubanos in the United States and the definitive answer is: NO, Habano cigars are still not allowed to be sold here. Upon giving that answer, the next question we get asked is, “What current brands here at home are somewhat similar to their Cuban counterparts?” Some manufactures are using Cuban seed to grow tobacco outside of Cuba, like Cuban Rounds Cigars.

The bottom line is that Cuban tobacco is truly unique and nothing else tastes like it. So, I looked at a myriad of cigars with tobacco from Nicaragua, Honduras, the DR, Mexico, Brazil, Sumatra, Cameroon and the US that have similar characteristics to Habanos, making comparisons based on body, strength and flavor profile. Listed below are 8 popular Cuban brands along with my similar Cuban Heritage brand selections (the domestic cigars carrying the same brand names).

Again, I’m not straight up comparing say a Dominican-made Monte to a Cuban Monte (because the Cuban snobs would lose their minds over it)… I’m again just pointing out similarities in their profiles. Example: If you like this full, strong, woody Cubano, here is a full, strong, woody domestic with the same name that has some of the same character. And I’m NOT claiming that one is better than the other… again, just comparing their profiles so you can pick out a good cigar that you just might like. Ok, so here we go…

In 1966, Fidel Castro had this brand created not only for his own enjoyment, but to pass out as gifts for diplomatic purposes. (There were many who tried to poison El Jefe and this was his way of making sure he would stay alive for a while.) In 1982, Cohiba was offered in three sizes for public consumption and then three more sizes were added to the line-up in 1989. Profile: Medium Bodied. Notes: Complex notes of wood, earth, creamy with a natural cedar and a slight citrus sweetness.

Heritage Brand That Compares: Cohiba Nicaragua – The Nicaragua is extremely full flavored and complex, much like the Cuban Cohiba Esplendido. The inner tobaccos are listed as a proprietary blend, and the outer is an oily Honduran sun grown oscuro leaf. It’s earthy, creamy smooth with a touch of sweetness. This is one hell of a nice premium smoke.

Heritage Brand That Compares: Hoyo de Tradicion – This cigar isn’t as strong as, say, a Hoyo Double Corona Cuban – but it is full flavored, and very similar in character. This is my favorite domestic Hoyo, incredibly smooth with a really nice sweet wood component. Just a great stick that I could enjoy every day.

As the story goes, in 1844, a cigar loving banker named Herman Upmann moved to Havana. He continued as a money man on the Cuban isle, but he also became a renowned cigar maker. Herman quickly found out that there was more money to be made in cigars than owning a bank and it became his fulltime love. To this day his signature appears on each box, along with various gold medals from world cigar exhibitions. Profile: Medium Bodied. Notes: earthy, coffee, wood and spice.

Heritage Brand That Compares: H Upmann Vintage Cameroon – This is a very smooth smoke and extremely well-balanced. Inside you’ll find Dominican, Nicaraguan and Peruvian tobaccos while covered in a Grade-1, silky-smooth African Cameroon wrapper. It’s creamy and woody, with a touch of coffee bean and sweet spice.

Translating to “The Glory of Cuba”, this Cuban pioneer brand dates back to the late 1800s. Known for its longer vitolas and rich, full flavors it has always been known for its elegance. Profile: Full Bodied. Notes: Nuts, earth, black pepper, leather and spice.

Heritage Brand That Compares: La Gloria Cubana Serie R – The Serie R is a robust and full flavored smoke with a tasty blend of Nicaraguan Ligero & Dominican Olor filler tobaccos. The outer leaf on the natural (there’s also a Maduro) is a gorgeous Ecuadorian Sumatra. It’s earthy, peppery with a nice touch of spice and definitely blended with its Cuban predecessor in mind.

In 1935, the H. Upmann factory in Havana launched the fabled Montecristo brand, naming it as a tribute to the cigar loving protagonist in the Count of Monte Cristo novel by Alexandre Dumas. They started the line with 5 sizes, and then several decades later, they added more and more. Profile: Medium Bodied. Notes: Creamy, oak, leather, nuts and very smooth.

Heritage Brand That Compares: Montecristo Epic – The creamy smooth profile of the Epic is indeed reminiscent of the famed Montecristo #2. The inner blend has an interesting mix of Nicaraguan and Dominican filler tobaccos from 2007 while draped in a golden-brown Ecuadorian Habano leaf. Creamy, nutty and woody, the Epic is one hell of a flavorful smoke and its name truly speaks volumes.

Don Jaime opened the doors to the Partagas factory in 1845, and it is perhaps the most noted Habano cigar making factory in the world. The Partagas brand is synonymous with rich tobaccos blends and strong, earthy flavor profiles. Profile: Full Bodied. Notes: peppery, charred wood, earth, black cherry.

Heritage Brand That Compares: Partagas 1845 Extra Oscuro – This Partagas packs a punch in strength and flavor profile. They are so damned flavorful that I keep turning to them for my nightly smoke. The dark and oily Connecticut Havano Oscuro wrapper makes you want to fire it up at moment’s notice, and the blend of barrel-aged Dominican, Honduran, and Nicaraguan ligero long-fillers makes for the most full-flavored domestic Partagas to date. A tiny bit of earth and pepper at the start gives way to wickedly tasty black cherry notes. Love this one.

Punch was created in 1840 by Don Manuel Lopez of J. Valle & Co mostly for Great Britain. The name came from their humor magazine, which was portrayed by the comical “Mr. Punch” of Punch and Judy fame.  Profile: Medium-Full Bodied. Notes: cedar, nuts, cherry and a slight floral component.

Heritage Brand That Compares: Punch Gran Puro Nicaragua – This is one heck of a full-flavored cigar that’s complex and like its name, packs a punch. Of the 8 heritage brands I’ve chosen, I think that this one is the most reminiscent of what many feel a true Cuban cigar is like. The wrapper is a dark and oily Broadleaf Maduro that gives it a sweetness like dark fruit. Then there’s that floral component that makes is so pleasant on the palate. Winner, winner, Punch for dinner.

Founded in 1875 and named after William Shakespeare’s most noted lovers – Romeo and Juliet. In 1903 under the direction of promoter, Don ‘Pepin’ the cigar gained great popularity. Winston Churchill loved the brand so much that he visited Cuba just for the cigars! And yes, Churchill’s name became the name of their popular size that old Winnie was so deeply fond of. Profile: Medium Bodied. Notes: complex, creamy, toasty, spice, cedar with slight floral notes.

Heritage Brand That Compares: Romeo 505 Nicaragua – The 505 has some real depth to it and is extremely well balanced with its Nicaraguan core filler and rich Habano Jalapa wrapper. Such a toasty smoke in both flavor and aroma, you get nice hits of cedar and a little dried fruit. There is a hell of a lot of taste in this one and just an outstanding effort by the people at Romeo.

So there are my almost Habano picks. I know there are that select few who will go on and on that there’s nothing like a Cuban cigar and you just can’t make comparisons, yada, yada, yada… please keep it to yourself, because if that’s what you have to say then you missed the point of the article. All right, people, sorry I got a little testy there, but snobbery has no place in my world when it comes to enjoying a great cigar. Hopefully I gave you some tasty selections to smoke and enjoy for yourself.

Well read. Well done comparing Cuban cigars to similar composite other brands. Especially the Upman Montecristo to the Montecristo Epic, #2. I have had the pleasure of smoking both and love the flavor and the richness. Nice job!

Read More
Cigar Makers
Alan Rubin, with his sons, Alec and Bradley, speak about how Alec Bradley Cigars has made their mark. We talk about the leading cigars in the AB stable, how the boys are contributing to their father's business, the new Black Market Estelí and Prensado Lost Art cigars, and much more. Alec Bradley fans: give it a listen.
Read More