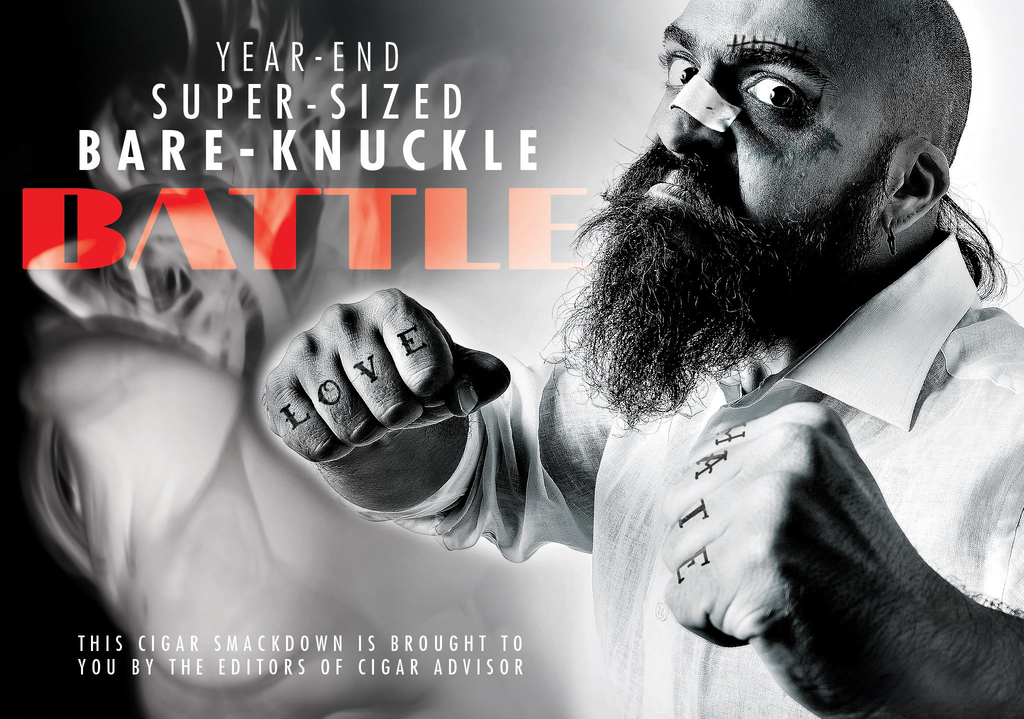 Year in Review: the Best Cigars We Smoked in 2013

Welcome to the Battle! For our 2013 year-end edition, all of the Advisors are giving you a peek inside our humidors to see what we’re smoking – and our picks for the cigars we’ve enjoyed most throughout this past year. Are these THE best cigars? Not necessarily – but because of experiences when smoking them, each has earned a special place in our collective heart…as the best cigars we smoked this year. Now – you’ll notice that we’re only telling you what they are and why we dig ’em, as opposed to giving these cigars a rating, a score, a rank or whatever arbitrary and arcane grade we could dream up. See, since this whole thing began, we called bullshit on pulling bogus “ratings” out of thin air, or basing a score on 3 puffs and a whole lotta hype. Instead, it’s best to let the cigars – and real smokers like you – do the talking. We supply the facts on each stick; and with that info, give you the chance to sample, review and choose the winners for yourself, and see if they stand up. Our criteria for choosing these cigars haven’t changed, either – we just happen to like ’em for one reason or another. And these 15 in particular, we really like a lot. Some (of course) are newer, some are not. But for comparison purposes, consider this a handpicked assortment of the cigars we enjoyed the bejesus out of during 2013. As for the descriptions themselves, we’re going off of what flavor and body the fillers have, what qualities the wrappers have and so on, plus 100% personal experience…and pitting the cigars (and the respective Advisor) against each other in this month’s Battle.

There’s no category and there’s really no rhyme or reason – other than we just really, really like ’em. So who’s got it right? Or does one of the Advisors have better taste in cigars? That’s up to you – as each category is an in-the-office cage match for the ages that pits Advisor vs. Advisor, mano a mano.

Camacho Connecticut…There are often times that you don’t want to smoke a cigar that grows hair in places you didn’t even know it was possible to grow hair. Now I’m not saying that Camacho cigars will cure male pattern baldness, but I am saying that they are pretty damned BOLD. Now, I LOVE the Camacho Connecticut because that golden wrapper tones the cigar down, smoothing it out for those times I’m feeling a bit more mellow, but still craving a LOT of tobacco flavor. It’s one of the brand’s top sellers for a reason and a cigar that stays at the top of my regular rotation. Wait a minute… I think I just found a new hair patch…

Inferno by Oliva…When you’re a true cigar lover who spends his hard earned quatloos on his sticks, you don’t want some namby pamby, run of the mill, bull-squat blend hanging from your face. And this is why I’m digging the Inferno, a cigar that is simply all about flavor – a LOT of flavor. It’s a bold and hearty cigar that I wouldn’t recommend for novice smokers, or to partake in the early hours of the day. I’m not saying that it’s overly powerful by any means – I’m saying it’s a smoke that really requires a more experienced palate to enjoy… Deep, rich, and complex enough for you to appreciate the nuances its body delivers.

90 Miles 1980…Now this cigar has taken many people by surprise – and for me in particular, it grabbed me by the johnson bar and said, “taste me, bitch, I’m a fine hand rolled cigar!” Flor de Gonzalez has always been known for making some of the best cigars in bundles but now the Ninety Miles 1980 is absolute proof that they can deliver delicious premium blends. The wrapper is dark and rich and the blend is medium to full bodied, delivering an absolute ton of flavor. Some might call this one a sleeper, but not for long, guys. It’s an excellent cigar and I am smoking them regularly!

CLE Corojo…If there’s one thing Christian Eiroa knows it’s Corojo leaf. I’d even put up the wrapper he used on his CLE Corojo against the best leaf from Cuba. As for the cigar, itself: flawless construction with a perfectly-balanced medley of sweet tobacco, nutty flavors, and so smooth it’ll remind you of those satin sheets you bought for those boogie nights. YUM!

La Gloria Gilded Age…I can see why they call the larger-ring version of this cigar a “Magnum,” though I’d call it “Voluptuous.” This 60-ring beauty swells with dark, woody-spicy flavors, superb balance, and consistency from end to end. If this cigar was a grand piano, I’d compose a symphony on it. If it was a woman, I’d make love to it on top of a grand piano.

H. Upmann Sun Grown…It’s like this: I needed a new ashtray, so I found an H. Upmann gift set with five Sun Grown Magnums and an ashtray on sale. Frankly, I rarely smoke H. Upmann, but even though I had no idea how they would taste, the shimmery wrappers seduced me. Ka-ching! Well, surprise, surprise, surprise! The smoke was so awe-inspiring I took up cliff diving. If my jaw wasn’t wired, I’d be smoking one right now.

Alec Bradley Nica Puro…This is a nothing cigar. Completely ignore it. I’m totally not going to draw you away from this cigar just so I can buy them all up because they’re so mouthwateringly, unbelievably, outstandingly good. Just… Just look away while I… *there we go* Awww, shoot. They’re all gone. Just don’t check my humidor because they’re not in there. Totally not in there…

Romeo Y Julieta House of Montague…Oh, young love. It just gets to me, I guess. I’m a sucker for a good love story and good cigars, so the Montague was a double dose of joy for me. I felt I needed to add this to my list of three best cigars because I couldn’t believe it came from Romeo y Julieta. The leader in smooth and mild cigars completely broke away from their usual offerings to smack me in the face with a heavy hitter. This is right up anyone’s alley who is looking for consistency, balance, and a little chutzpa.

CAO Flathead…And specifically, the Piston. Yes, a Lonsdale is on my top 3 list and I’m damn proud of it. The CAO Flathead is great in all sizes, but the true flavor comes from the menacing Maduro wrapper, making the Lonsdale a perfect offering. It may be 4-cylinder size, but it’s a power packed V12 with so much torque, it’ll snap your drive shaft clean in half. Okay, maybe it’s not that powerful, and certainly no innuendo intended (get your mind out of the gutter), but it’ll certainly have you running an 8 second quarter mile to get more.

La Aurora Pref Connecticut…You may look at its elegant shape and silky Connecticut Shade wrapper and think, “here’s a mild morning smoke.” You would be wrong. There’s plenty of oomph here, bringing unexpected body, flavor, and aroma by the ton. Just don’t judge a stogie by its cover!

Perdomo Champagne Sun Grown…Nothing says “celebration” like Champagne. Well, maybe a trip to Disneyworld, if cavorting with anthropomorphized mice is your thing. For that matter, does Goofy own Pluto? You know what, it doesn’t matter…for your next celebration, THIS is where you need to be.

Oliva Serie V Melanio…This Oliva cigar is the pinnacle of refinement – like a street-legal Grand Prix racer. It’ll get off the line plenty fast, but once you’re cruising at 100 mph in air-conditioned, easy-riding comfort, you won’t even miss the extra top-end horsepower.

Cusano 18 Paired Maduro…I wouldn’t be so bold as to call it glamorous – as it certainly isn’t going to get me invited to dinners with Presidents of foreign nations, on VIP lists at clubs or even help me get the ladies. But they’re all missing out on this Cusano, which I have found to be one of the most flavorful Maduro wrapped smokes ever – and one of the best cigars I’ve smoked this year. There’s a whole mess of different tobaccos inside, but the tastes come together like an incredibly executed triple play. Take a swing at this one – you won’t be sorry.

7-20-4…this one’s a 5-nation blend (you’re seeing a pattern here, aren’t you) that makes me want to fire guns into the air out the window of a funny car while doing wheelie burnouts. Yes, it sounds dangerous; but it’s a risk I’m willing to take due to the juice the 7-20-4 delivers. This is the cigar that turned me on to Brazilian Mata Fina in a hard way this year – and for that, I say “é show de bola” – which my Portuguese friends say is, “it’s the absolute nuts.”

Carlos Torano Exodus 1959 Silver…this Exodus is a trip through 3 countries for its tobacco, and rolled in Criollo…which, early on, I was mistakenly led to believe that it is Spanish for “causing tingling or possible numbness in fingers.” Not true. But it was the “smuggled seed” that came out of Cuba, which adds a nice bit of outlaw element to enjoying this cigar. The Toraño certainly is not new to the game – but for me, an undiscovered treasure – so now I know how Indiana Jones felt when he got past the rolling boulders and dart guns and grabbed that little golden idol. Or at least, that’s how I picture myself.

Reading Time: 6 minutes Our panel takes on the Romeo y Julieta House of Romeo Toro: blended by the legendary Grupo de Maestros and Rafael Nodal, the House of Romeo line is the last entry in the RyJ “House” series. So does this cigar finish off the collection with a bang? Watch now and see!