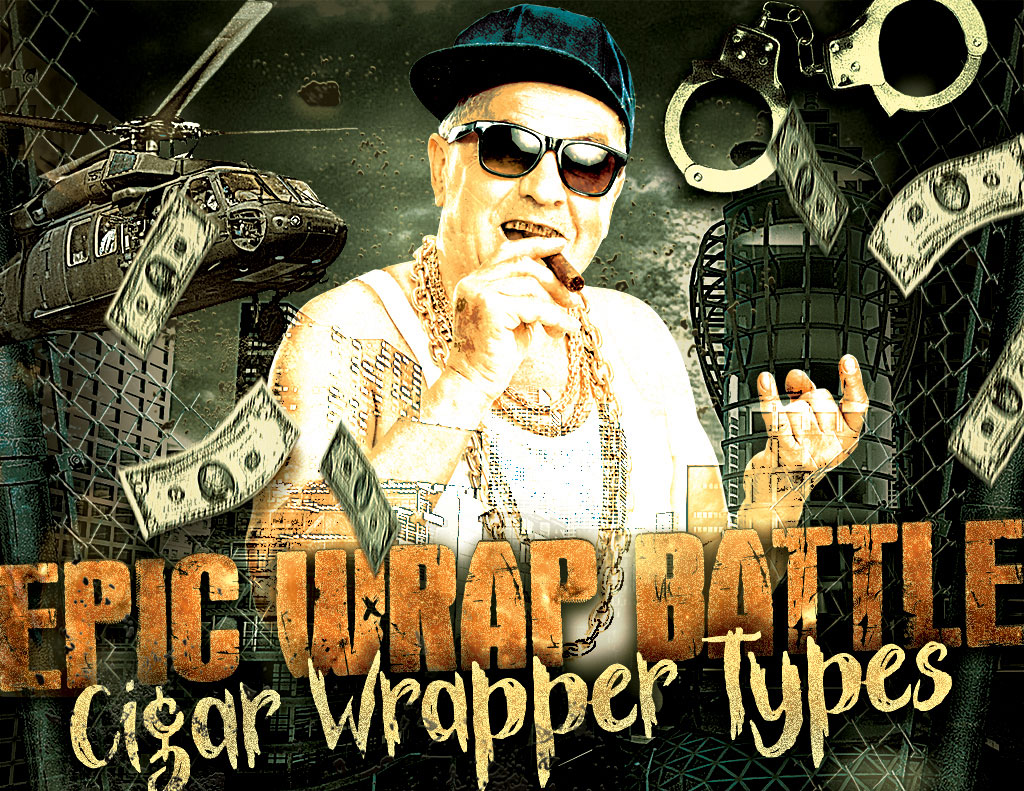 A Guide to Different Types of Cigar Wrapper: It’s a Wrap Battle!

One of the biggest kicks I get from smoking cigars is experimenting with different blends. Will this Nicaraguan filler go well with the Honduran binder and Maduro cigar wrapper like the manufacturer says? Or will I enjoy the Connecticut wrapped version of the same cigar better? It’s like playing Russian Roulette with a 6-shooter loaded with marshmallows. It’s a matter of pulling the trigger and seeing if you’re the big winner to get pelted with that sugary air-fluffed goodness.

But it’s important to realize there’s more to experimenting with new cigars than spinning the barrel and pulling the trigger on a Connecticut or Maduro. This is where most new smokers lack experience: having had a taste of the many wrappers that are out there. Mathematicians everywhere are in agreement that there is no number to accurately illustrate how many wrapper types there actually are. Hybrid blends, Habano 2000, Besuki and more, there’s stuff you’ve never heard of or even seen, which makes going to a store and looking for JUST a Connecticut or JUST a Maduro seem rather Busch League.

The wrappers on your cigars are wildly important. Aside from keeping the cigar’s guts from spilling out, they offer a lot in terms of flavor. Some say 60% of the taste is from the wrapper, but I think that’s a lot of hyperbolic mumbo jumbo. A real estimate is around 20%, but in the world of cigars, 20% makes all the difference in turning a dull cigar into a complex flavor bomb. So although flavor isn’t only reliant on the cigar wrapper, it still plays a particularly pivotal role on the outcome of your cigar. It’s similar to putting different BBQ sauces on a rack of ribs you’re slow cooking. Mesquite, Hickory, straight BBQ, Spicy Habanero, and a slew of other sauces and rubs can be applied to the ribs, and it will add that extra flavor that sends them into the next dimension.

Well, I’m serving up an 8 layer portion of cigar-beque “sauces” that are gently and ever-so-lovingly applied to some of the best cigars in the world today, as well as letting you in on how to spot them and what flavors you’ll be expecting with each one. Put your bib on, boys and girls. This is going to get deliciously messy.

Pennsylvania Broadleaf Maduro wrapper tobacco is an ugly son-of-a-gun with remarkably similar characteristics to Maduro tobaccos grown in the more popular Connecticut River Valley. Yet there are some differences: the appearance alone can be a dead giveaway, with Connecticut Broadleaf showing large veins running throughout, and PA Broadleaf featuring small bumps that have a toned-down sandpaper appearance and slight uneven colorization. These once-thought undesirable characteristics made these tobaccos great, enhancing a cigar’s flavor from within, making them perfect as filler or binder tobaccos. However the unmatched flavor found with this leaf soon forced the Broadleaf to the limelight of Maduro stogies everywhere. The PA Broadleaf will give you a rich earthy flavor with some mild sweetness that’s both velvety smooth and extra meaty at a significantly lower price than that of the CT Broadleaf. A great example of what a PA Broadleaf cigar wrapper can offer you can be found in the Padilla Vintage Churchill, where the capa really shines through to send this limited release cigar over the edge.

You want a Cuban Cigar? Well, I have a legal alternative for you if you just can’t wait for the embargo to be lifted: the Corojo! Derived from the Criollo seed, this wrapper type is used in Cuba and nearly every other tobacco growing region to maintain a rustic Cuban flavor while typically also offering a varying degree of spiciness. Nearly every manufacturer in every tobacco growing country offers a Corojo in some form or another, many of whom have perfected or mastered blending with this primo wrapper. A prime example of Corojo tobacco is the A Flores Gran Reserva. Released in 2013, this cigar has risen through the ranks and found its way into hardcore smoker’s hands time and time again. This extremely limited cigar is one that needs to be had by all who enjoy fine premium Cubanesque cigars and who have a desire for full on flavor from start to finish.

Meaning “Native Seed,” en Espanol, the Cree-Oy-Yo is considered the wrapper of the Gods. Originally, this was a Cuban tobacco grown within Cuba. But through smuggling and genetic tinkering, other nations have perfected growing this incredible species of tobacco. However, as its name implies, Criollo tobacco could just mean the tobacco used is native to that particular country of origin, and may not be grown using authentic Criollo seeds. Because of this, the taste can vary greatly from cigar to cigar or nation to nation. If you want some authentic ties to Cuba, look for “Havana-Seed” in the cigar’s description. In any case, this mahogany dark natural tobacco is oily with thin veins running throughout which is evident in the Alec Bradley Nica Puro: a full bodied all-Nicaraguan cigar loaded with uber-intense flavors that has made it to the exclusive Jon Detore Top 5 Must-Try Cigars.

As you can probably guess by the name alone, Habano is a Cuban original strain of tobacco which was named after the small island nation’s capital. With a slightly reddish dark natural brown appearance and a slight oily shimmer, this cigar wrapper leaf is typically spicy-sweet, but again, varies depending on where it is actually grown. Nicaraguan Habano can be more full bodied and spicy while Ecuadorian Habano is sweeter and medium bodied. In any case, you can expect both traits found in this widely popular wrapper that is an all-time favorite of mine. It goes without saying the Rocky Patel 15th is also one of my go-to cigars. Wrapped in tobacco grown in Ecuador, this full bodied smoke takes a sweet and savory flavor from the wrapper with extra strength coming from the filler tobaccos for an absolutely epic cigar. Enjoy when you have the time to truly analyze and fully enjoy a cigar rather than around a fire pit or while doing yard work.

If you’re looking for decadent flavor, look no further than the Mata Fina wrapper. Grown in the Mata Fina region (duh), this Bahia tobacco variety is extremely unique with rich flavors including sweetness, leather (in some cases), and a creamy/nutty note that is effing bonkers. For a long while, Brazil produced only binder and filler tobaccos, but the desire to get more flavor from these unique tobaccos so manufacturers could stay ahead of the competition led to these ugly ducklings making their way to the outside of the cigar. Noticeably oily with very slight discoloration, along with a toothy (also known as wavy) appearance will help you find this wrapper variety, but I recommend just picking up the Final Blend. As rich in flavor as you can possibly hope for, Final Blend cigars utilize what I wholeheartedly believe to be one of the best uses of a Mata Fina cigar wrapper on the market today, with an outstanding complementary core blend.

Cameroon is known for having an extremely vibrant culture, but in the cigar world, this Central-African nation is known for having some of the most sought after tobacco on the planet. But being the smallest cigar wrapper leaf has its downside in terms of price. Aside from the CT Shade Grown, Cameroon wrappers are priced relatively high, and also limit the sizes in which cigars can be rolled. Rarely will you ever see a Cameroon cigar surpass a 56 – 58 ring gauge. But manufacturers such as Arturo Fuente, Cohiba, and even some machine made producers have been able to take this small leaf and use it to create incredibly flavorful and complex cigars. With a sweetness and natural woodiness that complements the marriage of flavor cigars receive from your Spanish cedar humidor or the Spanish cedar cigar box they’re packaged in, this wrapper sports a beautifully smooth cinnamon to dark brown color. The Carlos Torano 1916 Cameroon exemplifies the flavor that can be had with this wrapper, and includes a cedar sleeve to only enhance the wrapper’s natural flavor.

Much like the Cameroon, Connecticut Shade Grown wrappers can easily be identified by appearance alone with a light silky-smooth feel, and nearly non-existent veins. This is the champion of all cigar wrappers in the industry, and easily the most in-demand leaf in the cigar industry. Now you may be surprised to hear that, considering CT Shade is synonymous with mild cigars. But full-bodied offerings have recently been utilizing the Connecticut Shade wrapper for the added smoothness and slightly sweet, grassy, woodiness it adds to any blend, as well as being used for some of the most popular cigars in the world today. One of those cigars is the Perdomo Champagne. Blended to celebrate any occasion, the Perdomo Champagne is made to offer smokers an opportunity to experience this highly sought after and expensive leaf at a more than manageable price, with extremely enticing flavors. It truly showcases exactly what a Connecticut Shade Grown cigar wrapper can do to enhance any cigar it encases.

If you’re looking for a truly hefty dark cigar on steroids, this is pretty much it. The Sumatra wrapper is grown all over the world, from Cameroon, to Indonesia, and more. One of the most common nations where you’ll find it grown, however, is Ecuador. Originating in the Sumatra region of Indonesia, this nearly jet-black tobacco is often confused with Mata Fina or Arapiraca from Brazil for its similar oily shimmer and rather rough looking surface. Really the only difference in appearance to the more common Brazilian tobacco is that the Ecuadorian Sumatra wrapper leaf has somewhat smaller veins. But much unlike the rich, creamy, nutty Mata Fina, the Ecuadorian Sumatra is spicy, strong, and sticks on your palate for a long flavorful finish. One of the most popular cigars that uses this wrapper is the La Gloria Cubana Serie N. With seemingly countless articles and review boards praising the Serie N, it’s easy to overlook how much influence the Ecuadorian Sumatra wrapper has over this ultra-flavorful stogie. That’s why we urge you to try one of these fan favorites on your own to experience this work horse in action.

So newbies: TAKE HEED! The regular dark and light cigars are far more complex than you may have thought. With an abundance of wrappers out there to choose from, hopefully this will ignite your passion even more for premium hand rolled cigars, and tempt you to try out new and exciting blends using wrappers you may not have known about or haven’t thought to try yet.

Excellent article I could not do better i especially agree with your Corojo discussion and the A. Flores selection. Even the half coronas are fabulous. Regards Boston Jimmie – Stogie Press Magazine

How about Mexican San Andres wrappers? These definitely deserve a place on your list!

Reading Time: 3 minutes Blended by Aganorsa Leaf Cigars, Gary and Jared take a couple of vitolas for a test drive in this Famous Nicaraguan Selection 6000 cigar review. Gary is smoking the Churchill, as Jared smokes the Toro. With only an inch difference in length between the cigars, see how well they met our rating criteria.