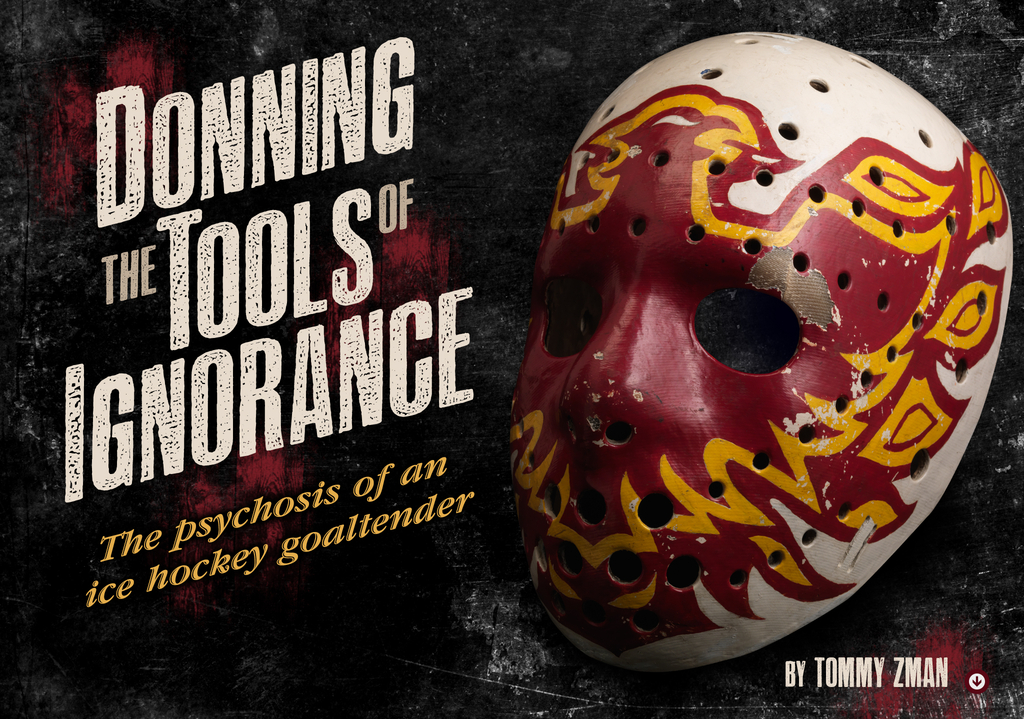 Donning The Tools of Ignorance: The psychosis of an ice hockey goaltender

It has often been said that the position of goaltender is played by people with multiple screws loose in their cerebellum. Goalies are branded as being quirky, weird, crazy, hyper or distant and aloof – or as my Italian friend best puts it, “They just ain’t right in the friggin head.” You might think I’m over generalizing just a tad, I mean, is it really fair to say that all goaltenders are certified psyche ward candidates? Well, as one who played the position at a very high level for a good twelve years of my life, I can honesty tell you there’s a reason why I bathe with my clothes on and eat steak dinners through a straw.

As a teen, I played the position on several high level travel teams, culminating with my final year on ice as a member of the New Jersey Rockets, the 1979 United States Junior B National Champions. I played against young Herculean thugs that could fire a puck in the hundred-mile an hour range and I had the scars to prove it – both physically and mentally. While in high school, I had so many bruises of the purple and green variety on my arms that my teachers thought for sure I was a junkie. Oh, I was a junkie all right, a Jason mask wielding, puck sucking junkie, much to my mother’s dismay.

Goaltenders are a fraternity, a breed apart that bear the weight of the world on their shoulders when entering that six by four foot cage. The job is to stop a rock-hard projectile of vulcanized rubber from entering the goal, and when they fail to do so (at the professional level), 20,000 people in an opposing arena cheer in mass delirium. Some vocation, huh? You see, goalies are considered to be the back bone of any team, the last line of defense whose actions can either preserve a much-needed team victory, or have him labeled as the “goat”, depressed and despondent for days on end. And, while the inherent physical dangers of the position are astounding, it is the mental pressures that can fuck with a man ’til his final days on earth.

Come on, Zman, if it’s really as bad as you say, why would anyone “choose” to do it? And THAT, is something I have struggled with lo these many years. What would make a man strap on his equipment, aptly referred to as the “tools of ignorance”, and accept the pressures of possible horrific failure, or worse yet, being maimed or even killed? In a recent sit down with NHL Hall of Fame Goaltender Bernie Parent, I asked him what it was like in the early 70’s to face Chicago’s Bobby Hull, a man with forearms like Mighty Joe Young, who possessed a Howitzer-like slap shot once clocked at 120 mph?

“You cannot play the position if you have any fear,” the ex-Flyer great remarked, “Fear is what caused many a goalie to quit the game. But the only guy that had me on edge was Hull. There were times he would come down the wing about 20 feet above the circle and I’d think to myself, God, please let the son of a bitch just score!”

And while Bernie chuckled with tongue planted firmly in his cheek, he was probably just “half” kidding. Back in those days, the equipment was archaic, paling in comparison to today’s light weight composite armor, also used in fortifying M1 tanks. And while the risk of serious injury was indeed greater than today, you can times that by 100 for the netminders of the 1960’s and earlier. Now those lunatics played the game without any facial protection, whatsoever. For almost a century, ice hockey goaltenders played without masks, something that is inconceivable by any time period’s standards. But it was a man named Jacques Plante, one of the greatest to ever flaunt the tools of fools, who would change the game forever.

In his career with the Montreal Canadiens, Plante had a collection of injuries that were a medical journal writer’s dream. He suffered through four broken noses, two shattered cheek bones, and a fractured skull, all until a game on November 1, 1959 in New York’s MadisonSquareGarden, when the Ranger’s Andy Bathgate ripped a shot into Plante’s unprotected puss, splitting him open like a butcher on a rump roast. The Canadiens back stop rushed to the locker room, only to return to the ice twenty minutes later with his faced heavily stitched, while donning a crude mask that he made for himself to use in practices only. Although in a daze, preceded by the swallowing of a gallon of his own blood, Jacques finished the game, beating the Rangers 3-1, and from that moment on, one by one, goalies began to wear a face mask.

So you ask me if goalies are all certifiable. Black Hawks great, Glenn Hall used to vomit his guts up before every game he ever played. Hall was once quoted as saying, “It’s the only way I can support my family – if I could do it another way, I wouldn’t be playing goal.” Montreal’s Patrick Roy would have conversations with his goal posts between stoppage’s of play. Between periods of each game, journeyman netminder Gary Smith would completely undress from all his equipment, shower, then redress for the start of the next period. New York Rangers renowned nut-job, Gilles Gratton insisted that being a goalie was strictly karmic, punishment for bad deeds in a prior life. He actually told his coach that he refused to start in goal one night because the moon was in the wrong place in the sky. Canadiens great, Gump Worsley said, “Goaltending?… The only job worse is a javelin catcher at a track-and- field meet.” And then there was ten year NHL veteran, Wilf Cude who when asked by his wife how a particular goal had beaten him, he hurled his steak dinner at her head – prompting his immediate search for a brand new profession.

Yes, people, I can assure you that the men who guard them pipes be insane – nuts, whacked, loony, psychotic – certifiably bat-shit fucking crazy. I hope I’ve made myself painfully clear on the subject matter. And as for me, well, I’m doing just fine these days… all except for the involuntary barking during a full moon and the urge to play lawn darts in the nude, I’m living a productive life. Thanks for asking.

The only thing I miss are the black-green-blue bruises(arms and above the kneecap) and the occasional shot in the jewels. The stars producing shots in the forehead were mostly forgettable (what?). Still have memories of the college cranks who loved to whistle(literally)shots past the head in practice. Luckily, I never had to decapitate any of ’em for not missing.