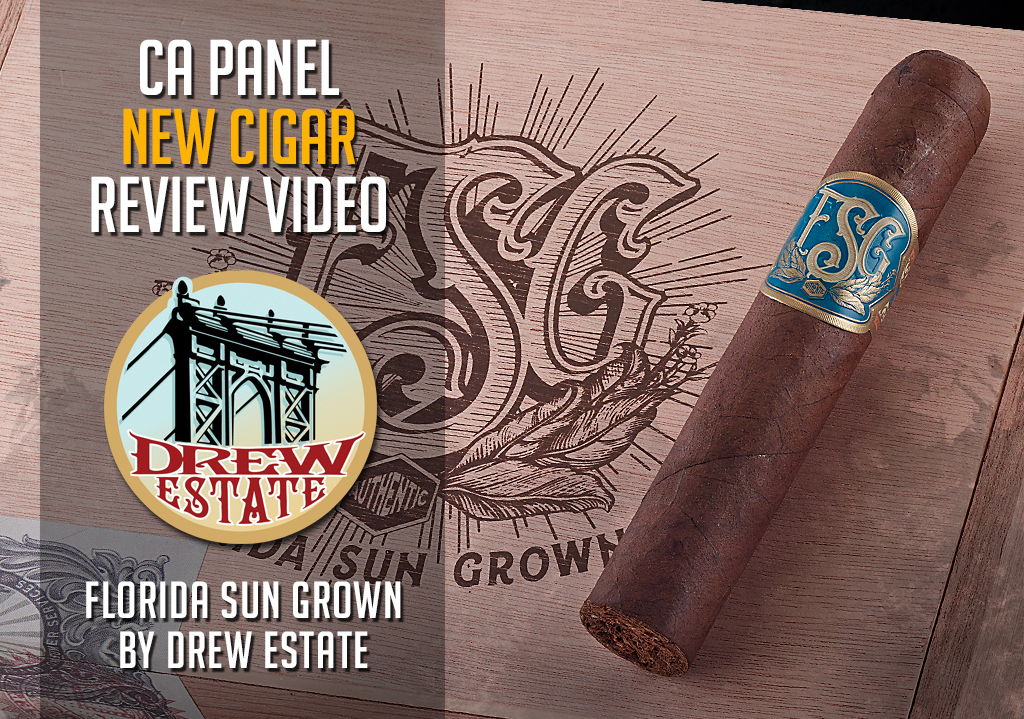 The Florida Sun Grown, or “FSG” by Drew Estate project began in 2011 and made its debut at the 2016 Drew Estate Florida Barn Smoker. Blended by Willy Herrera, the core FSG blend uses Florida Sun Grown Corojo ’99 ligero along with select Nicaraguan Seco and Viso long-fillers, a Honduran Criollo binder, and the cigars are finished in lush Brazilian Mata Fina wrappers.

“It was a unique challenge working with Florida sun grown tobacco,” said Willy, who spent two years developing the blend. “It was something completely new to me, and it took me numerous blends to figure out how to incorporate it into a blend I really loved. The final blend we’ve come up with is one I’m extremely excited about.”

Summary: By comparison, in terms of the potency of the spice, the cigar I smoked in the video was a little more tame than my baseline sample, which offered a virtual river rapids of peppery spice. However, both cigars were on equal footing with regard to their overall strength and body, which I found to be full throughout. I wouldn’t discourage it, but due to its density of strength and flavor of this cigar, I can’t recommend the Florida Sun Grown by Drew Estate Robusto to new cigar smokers, since a lot of novices may find themselves in over their head. But if you’ve acquired a taste for robust smokes, particularly Drew Estate staples like MUWAT, Herrera Estelí, and Liga Privada No.9 cigars, you’ll be very much at home and then some. This is a uniquely blended and unique-tasting cigar that should not be missed, especially since they are made in limited edition.

Construction and Overall Appearance: satiny with many raised veins – some tooth. Pretty weighty, nice feel.
Draw: Good, with just a bit of resistance.
Pre-light flavor: The scent has leather and sweetness, with a little pepper. Taste is oily, almost gamey, with roasted seeds and some woodiness –  a buttery vibe, too.
Toasting & Light: Thick creamy smoke pours from the get go, laced with a spice and sweetness.
Base flavors: Bread, leather, tangy sweetness, dark roasted coffee.
Retrohale: Sweet spice and pepper, along with wood and a floral essence.
Aroma: Woody, almost campfire-ish and a little sweet.
Burn / Ash Quality: Char line is tight, overall burn is “straight enough.” Almost solid, almost-white ash. Never needed a touch-up.
Balance of flavors: Pepper and spice tend to be the dominant flavors in one sample, almost non-existent in the other.

Summary: Sporting a much-coveted batch of sun-grown corojo fillers, the Drew Estate Florida Sun Grown is rolled with Nicaraguan tobaccos, and off to the races it goes: strength is medium, but everything else – intensity of flavors, thickness of the smoke, whatever – it’s all full, full, FULL. The first sample offered a dash of mushroomy earth, and a bit of a fermented flavor; then a layer of spice rolled in that tingled on the lips like oily hot sauce. For the second cigar you see me smoking on camera, that spice laid way back, allowing more of the core flavors – bread, leather, coffee, et al – to really shine through.

Halfway through, the spice machine dials back a couple of notches, but not for long; the spice comes roaring back at 2/3, then trails off again, leaving tanginess, dry earth and a subtly sweet baker’s chocolate. Smoke pours off this cigar, and it crackles with spice on a super-long finish. The FSG winds down and bitters up a bit with 1” left, and that was the end of the show.

Two things stand out with the FSG, depending on what kind of cigar smoker you are…first, if you don’t know how someone can nurse a robusto for over an hour and fifteen minutes, smoking the Florida Sun Grown will show you why: it’s meant to be taken slowly, in order for all the flavors to develop. Second, I can’t say for sure that the Florida sun grown corojo is, by itself, the difference-maker – but this cigar is a bit of a whole other animal than your usual smokes, once you really try to dig into the flavors. And here, that’s a good thing.

Verdict: a Drew Estate must-smoke, and an especially great option if you want something that’s very premium – and that’s not a Liga Privada.

Summary: So, here we have another full-flavored offering from the good people at Drew Estate that is actually quite different than their usual full-flavored cigars. The FSG is a cigar that has been several years in the making, bringing Florida cigar tobacco back to our storied industry.

What’s different here other than the Florida grown tobaccos that make up the inside of the cigar, is a dark, natural, very oily Brazilian Mata Fina wrapper. This unique combination of leaf makes for one incredibly delicious, full-flavored cigar. While it’s not by any means a knock-your-head-off strong smoke, the inner ligero blend gives it some real pop. There is a whole lot going on in the flavor department with a complex mix of notes such as black pepper, spice, dark roast coffee and I even got some perfume-type floral notes that you usually find in well-aged Cuban puros.

The construction of this one is excellent as the stick is dense and packed with tobacco, giving you a great draw while a mountain of smoke pours from the foot.

If you’re a lover of cigars with a whole lotta oomph, this is one unique cigar with a flavor profile that you really have to experience. Kudos to the boys at Drew for once again, setting a standard in full-flavored smokes.

Construction and Overall Appearance: Beautiful Mata Fina wrapper and a very solid and well-packed cigar.
Draw: Easy.
Pre-light flavor: Foot is very woody with leather, cedar, earth, and a spicy tang. Cold draw is very bready with a subtle sweetness, cedar wood, hay, and thyme.
Toasting & Light: Initially very toasty, woody, and bready with a buttery mouth-feel and notes of earth.
Base flavors: Black pepper, mesquite, cedar, oak, earth, and coffee.
Retrohale: Lots of nicotine strength, flavors include woody, black pepper, a smoky mesquite, and an oak aftertaste.
Burn / Ash Quality: Strong and solid ash.
Balance of flavors: Focused mostly on black pepper and strength but there was a good balance of flavor. Last third is savory; notes of nut, oak, cedar, earth, cream, a subtle sweetness, and mesquite. The pepper is mostly gone, a rich chocolate note replaces it. At the nub the spice is back; reminds me more of a warm chili powder spice.

Summary: Even in the early stages of a sinus infection/cold while reviewing this cigar, I was (surprisingly) able to pull a lot of flavor out of this cigar. Florida Sun Grown, with a beautiful Mata Fina wrapper, this was a full-bodied smoke loaded with complex flavors. The foot smelled of cedar, leather, earth, and a spicy tang while the cold draw was bready with a subtle sweetness, hay, cedar, and thyme.

Toasting this bad boy up, I pulled a smoky, mesquite-like flavor that reminded me of Kentucky Fire Cured tobacco with a nice tanginess. After a few puffs I pulled some complex notes; there was a dark fruit sweetness underscored by black pepper with earth and nuts and a cedar after-taste.

Things get more consistent after 1”; the main notes are black pepper, dark fruits (like cherries), cedar, mesquite, earth, black coffee, and a buttery mouth-feel. So far the smoke is a bit more peppery than I normally like with the pepper primarily hitting me in the back of the throat. The retrohale is strong- bringing a lot of nicotine strength with savory flavors of black pepper, wood, a smoky mesquite, and oak on the aftertaste. It was too much for me in my state so I forgo any more retrohales.

By the 2/3 the pepper starts to wind down very slightly, an inkling of sweetness was present as the nuttiness came back. The draw started to get a little tight but still workable. At the last third this cigar was kicking out loads of mouthwatering flavor- nuts, oak, cedar, earth, cream, mesquite, and a subtle sweetness. I also detected a rich chocolate note that reminded me of soufflé. By the nub, things turned a bit sour- the spice came back reminding me of chili powder.

Overall, a complex smoke that kept me guessing the whole time. If you liked the T-52, I think you’ll enjoy the Florida Sun Grown.

Our takeaway is that this FSG is a winner. Your comments are welcome, too – leave us a note below.

Reading Time: 8 minutes Think Saint Luis Rey cigars are for gramps? Not if you’ve smoked Carenas. There’s a lot going on with this Cuban-style smoke, especially at its fair price. Check out our review and see why we had a hard time putting it down.