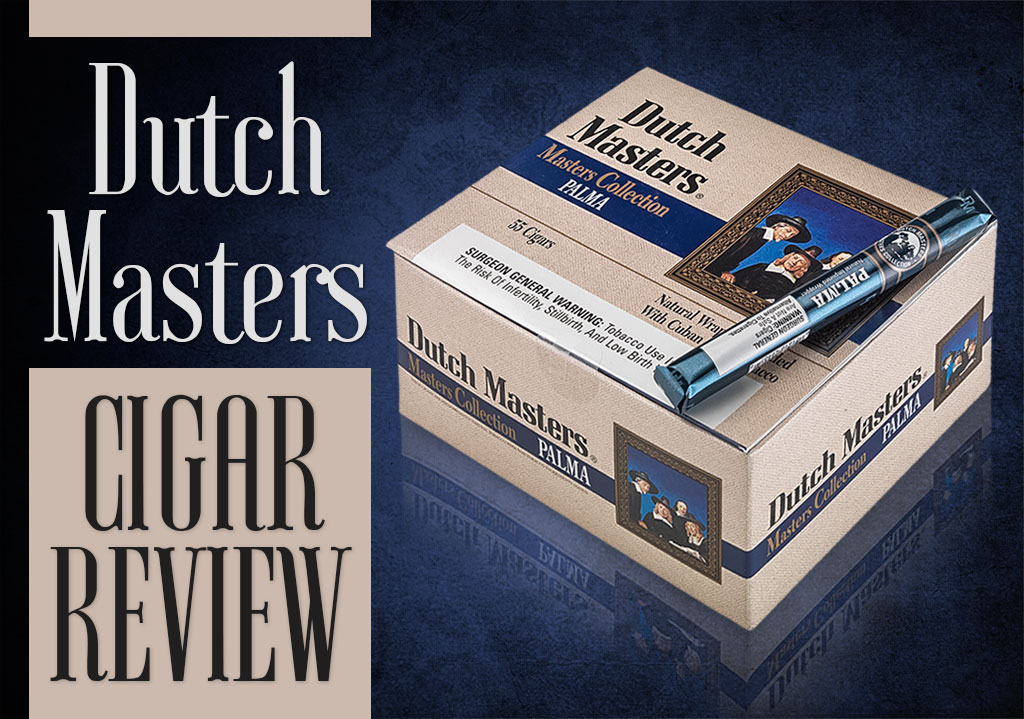 Here’s the simple and plain fact: we cigar lovers don’t always have access to a hand rolled premium smoke, or the time to kick back and enjoy one, either. Enter – the Dutch Masters cigar review.

The Palma is a machine made cigar dating back to its beginnings in 1911, and is still one of the most recognizable cigars in the world today. To us premium cigar lovers, a machine made can definitely serve a purpose when one is jonesing for that quick smoke and a need for the taste of tobacco.  I personally always keep a handful of the Dutch Masters Palmas in the center console of my car for, let’s just say those times in need. What’s great is that the manufacturer (Altadis) switched the packaging of the individual sticks from cellophane to a new foil wrapping that definitely keeps the tobacco fresh and moist for a longer period of time.

Okay, you snobs out there who are sneering at the fact that I do indeed partake in the Vanilla Dutches, (as they are often referred to). To me, having these smaller, thinner cigars on hand is kind of a matter of survival. I mean, sometimes you’ve just gotta have a cigar, and when the expensive stuff is resting comfortably at home in your humidor, these inexpensive treats can suffice your inner cravings. Come now… he who has never smoked a yard gar or two, go right ahead and cast the first stone. And if you REALLY have never smoked a yard gar before, you should check out the piece I wrote last September for Cigar Advisor that highlights the many benefits of breaking up your rotation of high-end ultra premiums with the occasional inexpensive stogie.

A few things to point out is that the Dutch Masters Palma is made with a natural Cameroon tobacco leaf wrapper, not a cigarette grade paper like some of the cheaper smokes are made from. It’s a mild smoke that actually has a nice little touch of sweetness along with a hint of vanilla, even though no flavoring is used to make the cigar. I think perhaps the biggest positive to these sticks is that they are just always consistent and you never really hear of them having any burn issues.

Now, one instance where these cigars can seriously come in handy is when you go to a party or barbecue. I always bring a handful of nice premium sticks for the guys who appreciate higher end cigars… and then, I always bring along a box of Dutch Masters cigars for the mooches and the casual at best smokers who just want to enjoy with the rest of the crowd. There is absolutely nothing worse than when some dumb ass grabs one of my Oliva V’s, La Gloria Gilded Age, or Liga Privada Undercrown and then puts it down and walks away after just two puffs – well, that’s just a big old slap in the face to me. So the Palma it is for those guys, and when I run out of the premiums, I just may dip into the Dutch Masters myself.

So, there you go, the Dutch Masters Palma may be a machine made stick, but it definitely has a distinct purpose in the world of the cigar smoker. Come on, don’t be a snob, pick up a handful because you just never know when the need will arise.