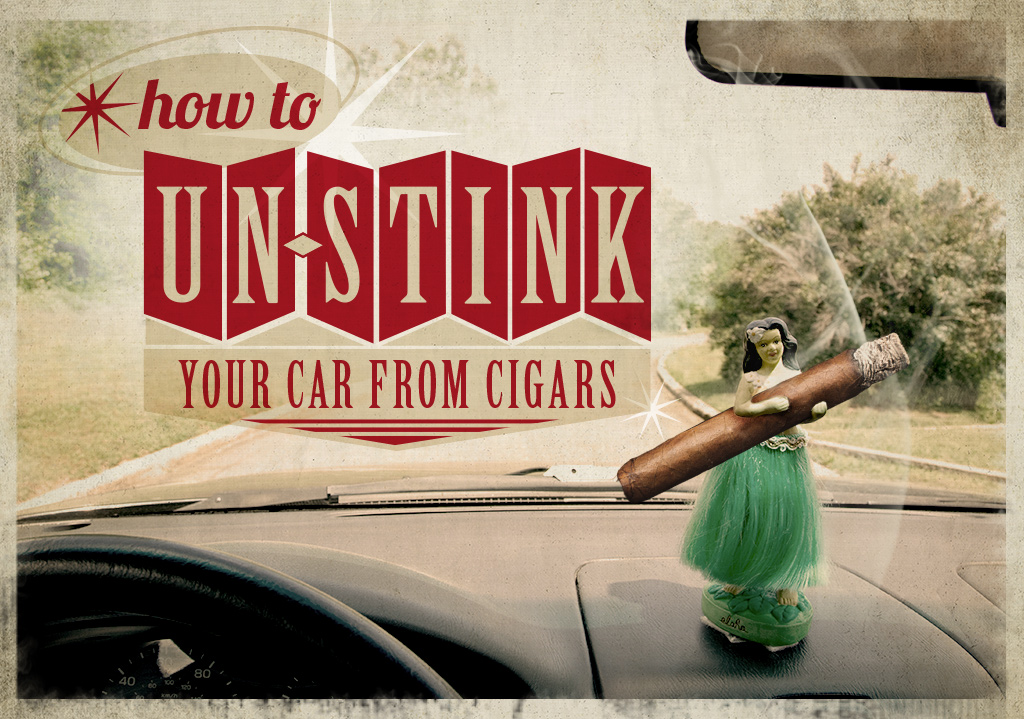 How To Un-Stink Your Car: Eliminate Cigar Smell

I love nothing more than lighting up a good premium hand rolled cigar when I’m about to take a drive in my car. To me, nothing is more enjoyable, especially on a long drive than puffing on my stogie, as it relaxes my mind, eases my tensions, and helps to pass the time while on my journey.

When I smoke in the car while driving, it almost feels as if I have a good friend in there with me: a faithful buddy who’s along for the ride no matter where I’m headed. And while he doesn’t say much, he lets his delicious tobacco flavor and soothing aroma do his talking.

I know a lot of you feel the same way that I do as you relish the thought of lighting up when you get behind the wheel. Then again, I know there are many of you that don’t or won’t smoke in your car for several reasons. The first being – the kids and the wife, but okay, that’s a pretty good reason. The other being, the unfortunate and undeniable truth that smoking while driving really can make your car stink.

Okay, yes, my wife and kids do complain that my car smells like a tire fire and they will bitch the entire time while in it. But the fact is that I don’t smoke while they’re in the car, ever – it’s just that the lingering odor of freshly smoldering premium hand rolled goodness is something that they just can’t seem to wrap their olfactory senses around. So, the choice was to either stop smoking in the car… or, do something about it. And, as you might have guessed – I chose the latter.

Now there are a few things to consider when attempting to make the inside of your car a bit more fresher. The first, is preventing it from stinking, the second is masking the stinking, and the third is eliminating the stinking. The thing that you’ve got to realize is that it makes a big difference whether you have cloth or leather seats. Basic science just tells us that cloth will absorb smoke smell, and leather, really not so much. So, cars with cloth seats need a lot more maintenance and preventative measures.

Okay, so a few very simple tips for preventing the stankinesss. First off, you need to open more than just your front windows to let the smoke out. If you have back windows you’ve gotta at least open them a crack. Even with the front window open, smoke floats to the back then lingers and stays there, and opening the back windows even just a little helps it all to escape. Now something unfortunate is that when you run the air conditioning or the heat, well, it sucks smoke into the unit and the next time you start your car, that stale odor comes pouring out as your family members ream you a new one for being an inconsiderate clod. So, first off, I really try not to turn on the air or heat if I’m smoking, but if you have to, go with just turning it on below onto your feet as the smoke doesn’t really drift as much below.

Something you can do to eliminate cigar smell is spray a fresh scent into the air vents. One particular product that I highly recommend is Re-Fresh Smoke Odor Eliminator. It’s a small spray can and uses natural citrus oils to destroy tobacco odors. This stuff just smells great, it’s available in several really pleasant scents, and it really does a great job at eliminating the stink!

One thing that most definitely makes any auto pretty rank is leaving ashes or cigar butts in the ashtray or in a cup. Thankfully, our pals at Xikar make a couple of great steel ashtray cans for your car’s cup holders that you can seal with a cover so the stank doesn’t linger! There’s the Xikar Ashtray Can and the Xikar Executive Ash Can. They are extremely well made and yes, they work great!

There are couple of things you can do to mask the odor that’s in your car and those old fashioned pine tree air fresheners are no match for the wafting goodness of a hand rolled happy stick. So you simply want to place something in there that basically smells better than the stale smokiness. Onetime I accidentally left an Italian sub sandwich in the back seat and later that day the car had the most awesome whiff of Genoa salami with oregano, oil and vinegar. Again, not a hit with the wife and kids but the bugs seem to like it a lot. For those of you who think that’s a bit much, use the old trick of taking scented dryer sheets and actually keep them under your seats. Athletes like hockey players will keep them in their equipment bags and it really works pretty well. Another thing that works are those deodorizing sneaker balls tossed onto the floor in the back.

Eliminating odor completely isn’t the easiest thing to do, especially if you have cloth seats. Giving the upholstery a Febreeze™ bath and then leaving the windows open a while will always help. And then there’s the Re-Fresh spray that I mentioned earlier. But for the serious in-car cigar smoker there’s an amazing little product that I highly recommend known as the Csonka Auto Smoker Cloaker! With its exclusive ozonation system, I think that it just might be the BEST solution for keeping the air in your car pure and odor-free! And the beautiful thing is that it’s maintenance-free and priced very affordably for an item that works this well. Just plug it in your lighter or accessory outlet and you can finally toss that tacky pine tree freshener!

So there you go… a few solid tips for those of you who want to light up your favorite stick while cruising the roadways, but don’t want to be the recipient of the evil stink-eye every time someone comes along for the ride.

And finally… if you’ve got some tips or tricks that YOU use to keep your auto fresh, we’d love you to post it in a comment below!

Mix some white vinegar with the febreeze. THAT will nail it. let the vinegar dry…

vineger in a bowl

PreStain treatment for clothes. It really does get rid of smells.

[…] the top to open four saddles for near-windproof smoking, and close them to keep the ashes and old cigar smell inside. Great for outdoors, and one of our best ashtray picks for boat […]

The Holiday Cigar: It’s How I Survive Christmas