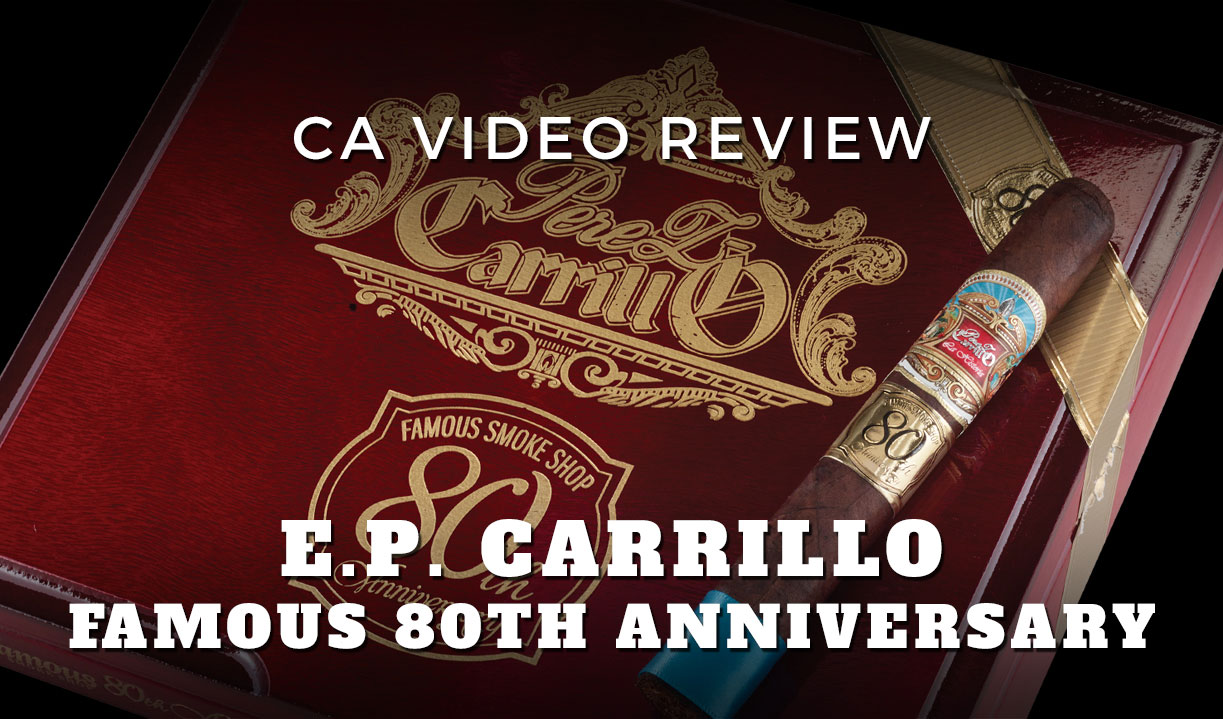 The EPC Edición Limitada Famous 80th Anniversary cigar joins the stable of other 80th Anniversary cigars released by Famous Smoke Shop this year, but it comes with something extra – love. Ernesto Perez-Carrillo and Famous Smoke Shop’s founder, Arthur Zaretsky have a friendship that spans more than 25 years in the business, to the days when Ernesto was still with La Gloria Cubana cigars.

When Ernesto agreed to make a cigar for the company’s 80th year in business, it was a labor of love. He wanted it to be a very special cigar, like something he would do for his family – take Ernesto’s La Historia and Encore selections, for instance. In fact, Ernesto said he had a wrapper leaf he’d been saving for a family project, and so the blend was built around that. 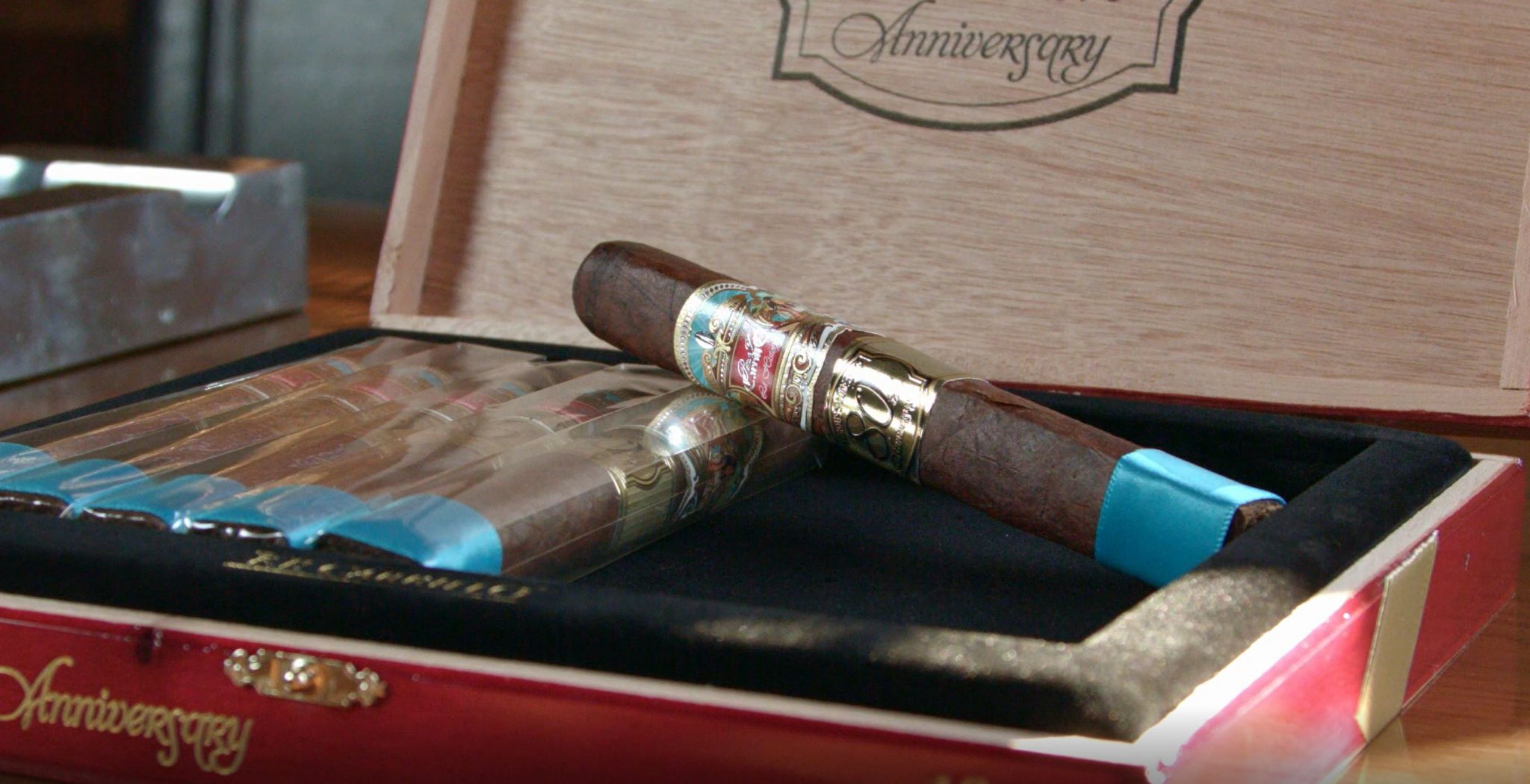 Using that hybrid Connecticut wrapper over a recipe of choice Nicaraguan long-fillers, Ernesto completed the cigar with a silk, sky-blue band at the foot and two neck bands: a gold “Famous 80th Anniversary” band, and above it, a band like that found on the EP Carrillo La Historia. The reason for this was to ensure that this cigar would become part of the Perez-Carrillo “Family Series” – in other words – top of the line. Presented in a limited run of just 250 boxes.

Construction and Overall Appearance: Gorgeous. The Connecticut wrapper is thick, and oily with an attractive reddish patina. The cigar is well-packed with entubar-rolled fillers, triple seam cap, and the box-pressing is slightly rounded. The cigar feels comfortable in the hand and mouth.
Draw (airflow): Perfect. Smoke flows easily from the foot and through the head.
Pre-light flavor (cold draw): Leather, raisin, and a hint of salt.
First few puffs: Cedary, sweet, and spicy with a note of mocha.
Base flavors: Leather, raisin, cedar, mocha, sweet spice, coffee bean, white pepper.
Aroma: Sweet.
Burn / Ash Quality: Excellent. The cigar burned evenly throughout revealing long, dark grey, gravity defying ashes.
Balance of flavors: Dead on. The flavors remained as consistent and well-defined at the end as they did at the start.

Summary: The EPC Famous 80th Anniversary Toro starts out medium-bodied with a well-balanced and creamy mix of leather, cedar, and sweet spice. The transition to the second act is barely noticeable, except for the entrance of mocha and coffee bean. The finish is long with a slight, lingering note of white pepper. Imagine a Gatorade-size tub of flavor notes splashing over you at precise intervals. Then, just before they begin to fade, you’re splashed again. In the last third the flavors take on more of an earthy quality, but the sweet spice, leather and mocha, remain center stage.

Suffice it to say. . . The EPC Famous 80th Anniversary Toro is what I call “a perfect cigar.” The smoke offers plenty of creamy, well-defined flavors and just the right amount of sweetness throughout within a medium-bodied/medium-strength profile. Plus, it burns perfectly, and if you take your time with it, this cigar will give you a good hour-and-a-half of gratifying indulgence – maybe even two. Letting it breathe between puffs allows the cigar to cool just enough to maintain its creaminess and abundance of flavors. More experienced smokers will really appreciate this cigar, especially those who have grown accustomed to complex Nicaraguan cigars. This is a very refined premium cigar that will age-up nicely, too, which is why I recommend going for a whole box. Moreover, this cigar also comes with something else that Famous Smoke Shop is known for – value. It not only smokes like a dream, but you’re getting a lot of cigar for your money. 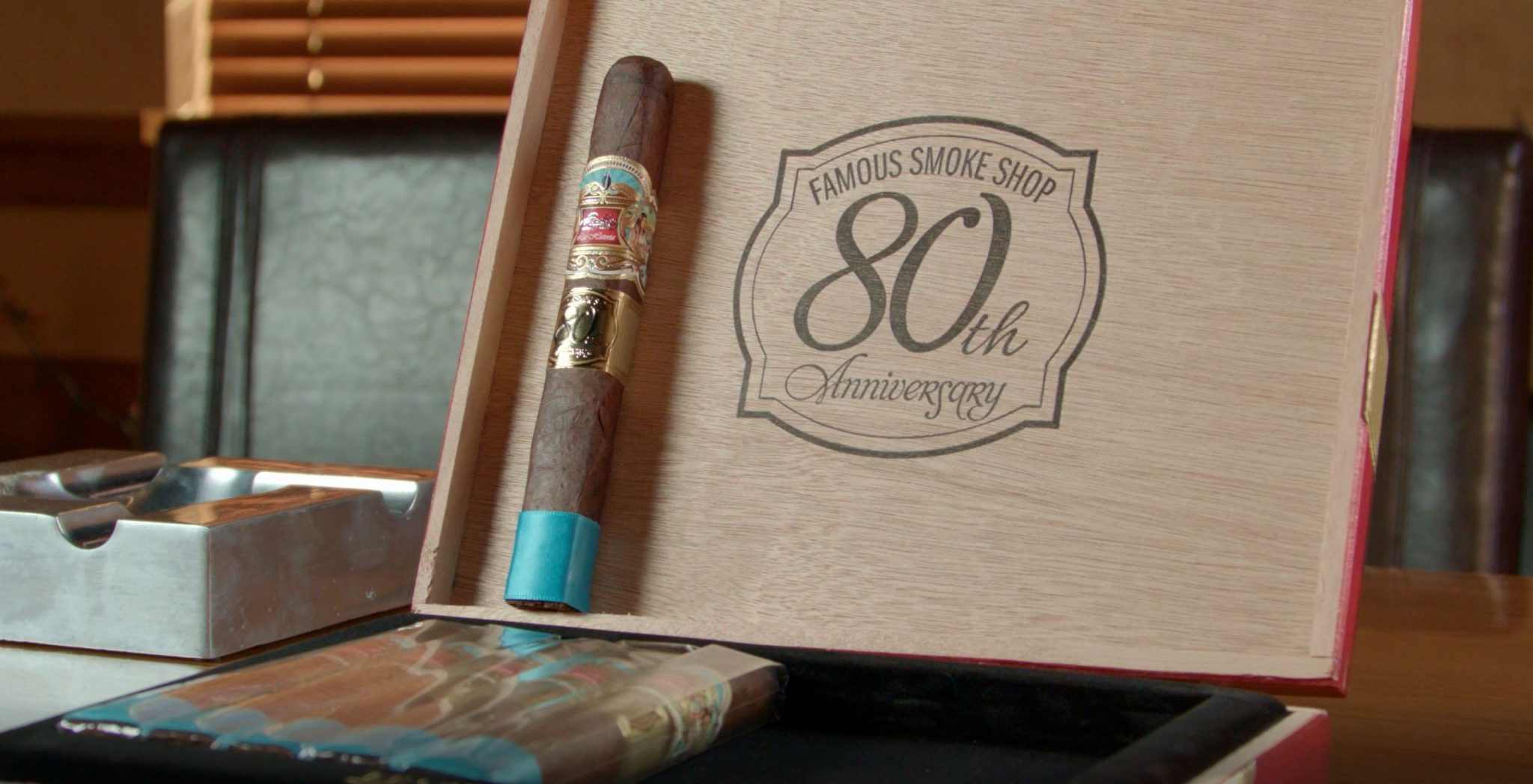 Construction: The meaty, dark brown wrapper on this soft press toro has some obvious texture, along with a nice bit of oil.
Draw: Nice, with some resistance.
Pre-light flavor: Sweet, like raisin – along with natural tobacco, wood and tea.
Toasting & Light: Pepper and charred oak – but doesn’t take long for some sweetness to creep in.
Base flavors: Pepper, oak, earth and crispy zest (in that order of intensity).
Retrohale: White pepper, oak, and a fresh green vegetable type sensation.
Aroma: Floral and wood.
Burn & Ash Quality: Near white ash is nicely stacked – excellent burn.
Balance of flavors: Flavors play very well together, even the “drive-bys.”

Summary: After a bitey, peppery start, the EP Carrillo Family Series Famous 80th gets a little creamy after some time puffing on it. And half an inch in, the sweetness is more apparent – bordering on “raisin-esque.”

As this sweetness builds, so does the body – there’s a smack of charred oak, and the finish develops a taste that’s something between coffee and leather. But it doesn’t get truly strong; while this EPC cigar starts out medium in both body and strength, it finishes only a notch or two above that. Smoke production is very satisfying. 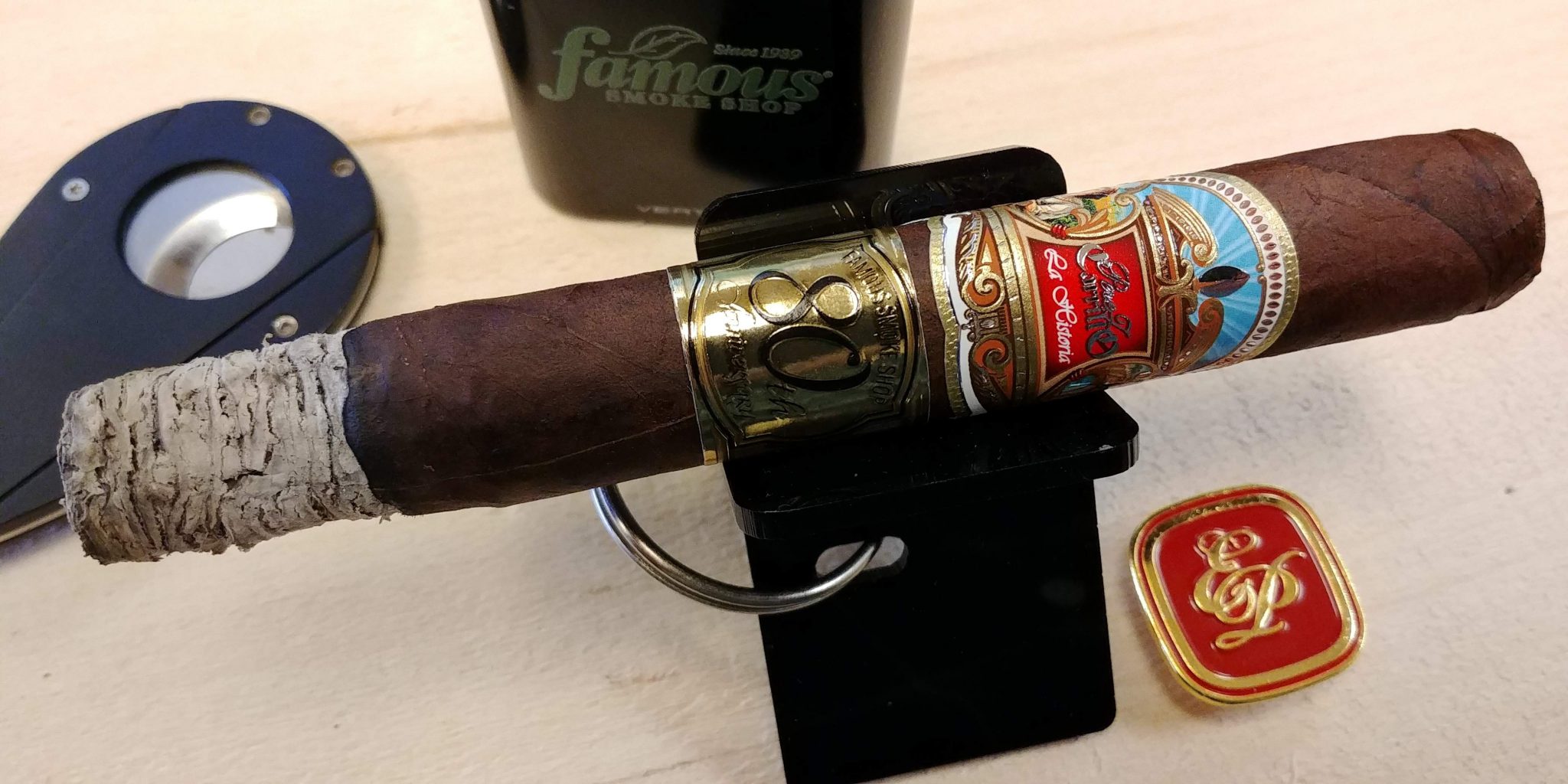 Then come the drive-by flavors.

What I mean by that: the base flavors establish themselves pretty early on…then, in pops a tasty nuance that complements the main taste profile, but disappears just as you recognize it. Sometimes it’s that raisin sweetness; others, it’s damp earth. A little later, it adds a fresh green vegetable or herb taste. If you grow tomatoes or peppers at home, you’ll know what I’m talking about – that scent that hangs in the air and sticks to your fingers when you rub your hand up against the tomato plant’s leaves.

The EPC Famous 80th Anniversary is closely related to the La Historia and Encore (2018’s #1 cigar of the year), which all fall into the Family Series – at the top of the EPC pyramid of blends: 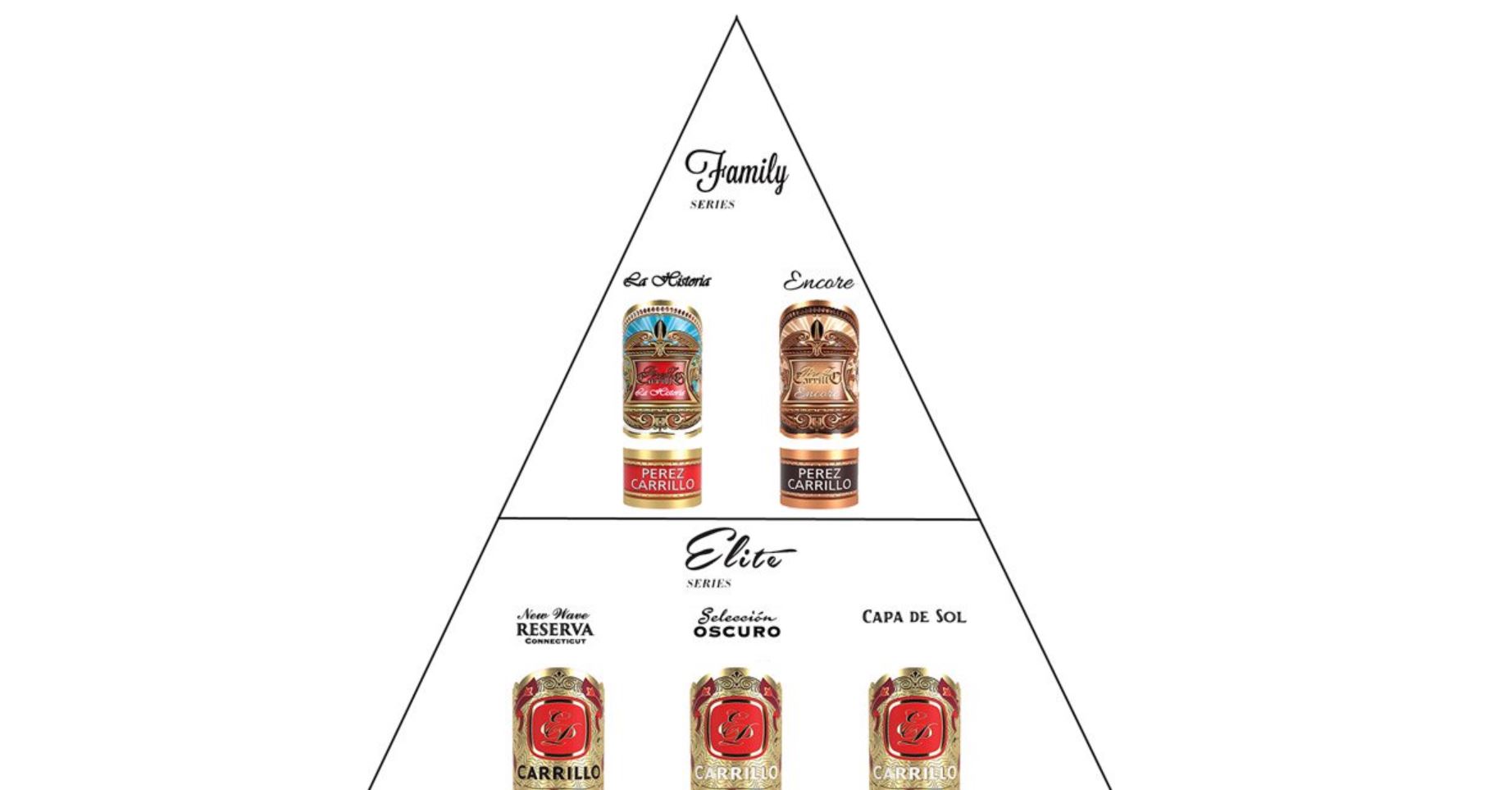 Taste-wise, the Famous 80th falls right in between those two cigars: I’d say La Historia is sweeter, while Encore is more woody-earthy. This one we’re smoking splits the difference, taking on a bit of taste from each.

A top-tier smoke from Ernesto Perez-Carrillo – and as an affordable limited run selection, consider this a great treat-yourself cigar.

Summary: This blend’s introductory handshake had a big emphasis on flavor. The first few puffs were savory and tingled on the roof of my mouth – giving way to pepper, earth, and wood. As I smoked through the first inch, the cigar started to remind me of potato chips or French fries – mostly due to the saltiness. The finish was long, vegetal, and crisp. 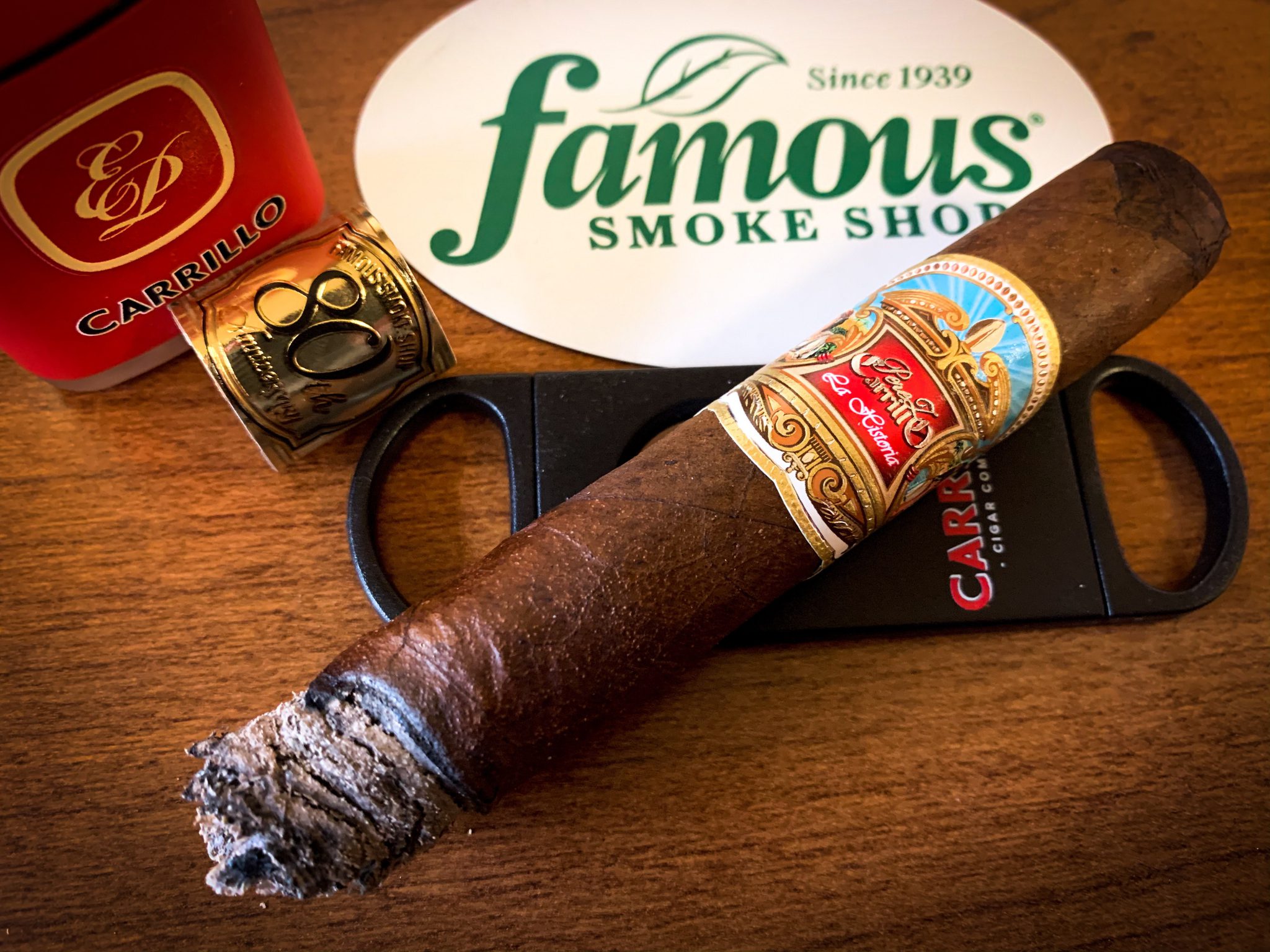 EPC 80th didn’t hit me overly hard with strength, but it did settle down in the second half. Those vegetal notes were still there, but fainter, and the savoriness played a little bit of ping pong.

For the finale, things got a bit creamier, and maybe even a little toasty at times. All said, I was impressed, and it turned out to be one of my preferred Famous 80th Collection sticks. Ernesto has a reputation in the industry for making cigars that are both complex and balanced, so this is one of those rare times that it’s good to be unsurprised. EPC fans will be pleased. And those of you who haven’t yet experienced his blending expertise will fall in line too. Just make sure you have some experience under your belt before you pull the trigger.

Reading Time: 2 minutes The holidays are upon us; 2020 is (thankfully) almost over. What better way to celebrate than with new cigar arrivals from Crowned Heads, ACE Prime, and Davidoff? Check out the details now!