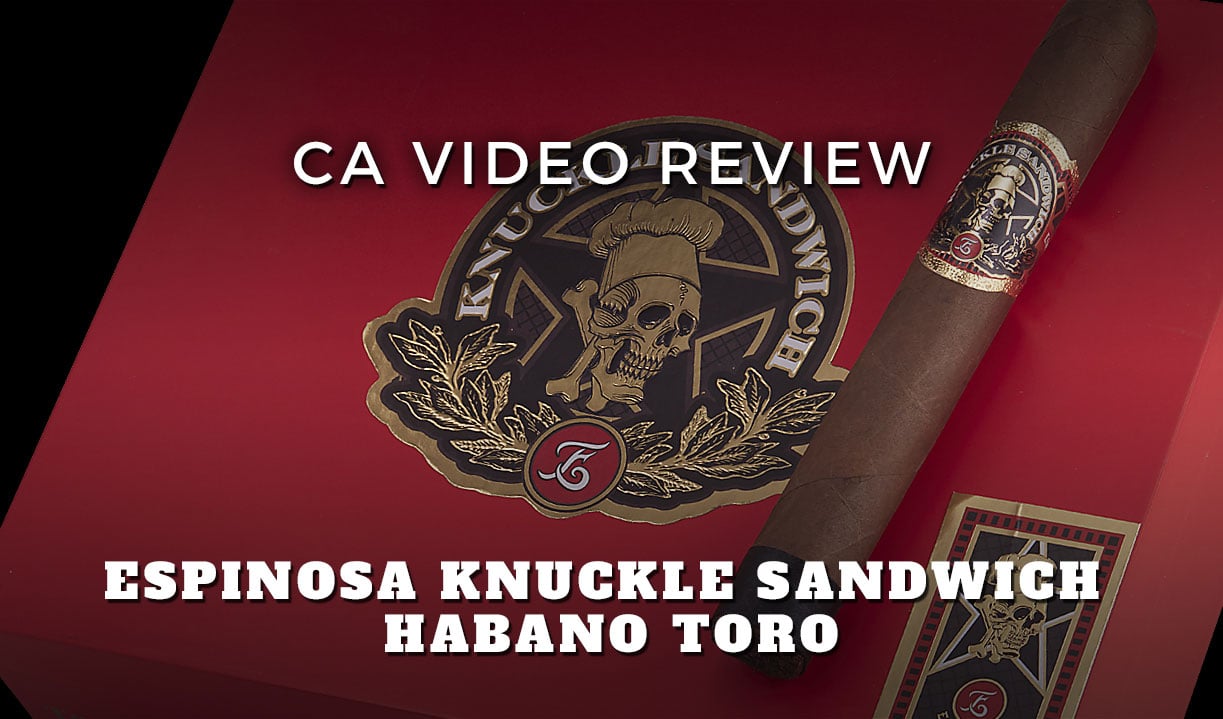 Guy Fieri—celebrity chef, restauranteur, and Emmy winning TV host of Diners, Drive-ins, and Dives—recently took his love of cigars to another level. He’s teamed up with Erik Espinosa and AJ Fernandez to craft a signature cigar to call his own. The Knuckle Sandwich has 2 different wrapper choices—a Maduro and Habano (the cigar we’re reviewing)—and is blended at Espinosa Premium Cigars and hand rolled at AJ Fernandez’s San Lotano Factory in Nicaragua.

As to the question of just how involved Guy Fieri was in the production of Knuckle Sandwich, Erik Espinosa sums it up perfectly saying, “Guy’s a cigar guy – loves to smoke and is super excited about this project…he took a break from shooting one of his television shows to join me as I visited several cigar shops throughout South Florida.”

It’s safe to say, we were all wondering if this blend would take us to Flavortown. Check out our panel review video on Knuckle Sandwich Habano to see if this cigar is a flavor bomb or a blast of bland and dull.

I think we were all struck by Knuckle Sandwich Habano’s overall balance. While we may have detected slightly different flavor notes, we all agreed that they were in nearly perfect symmetry. 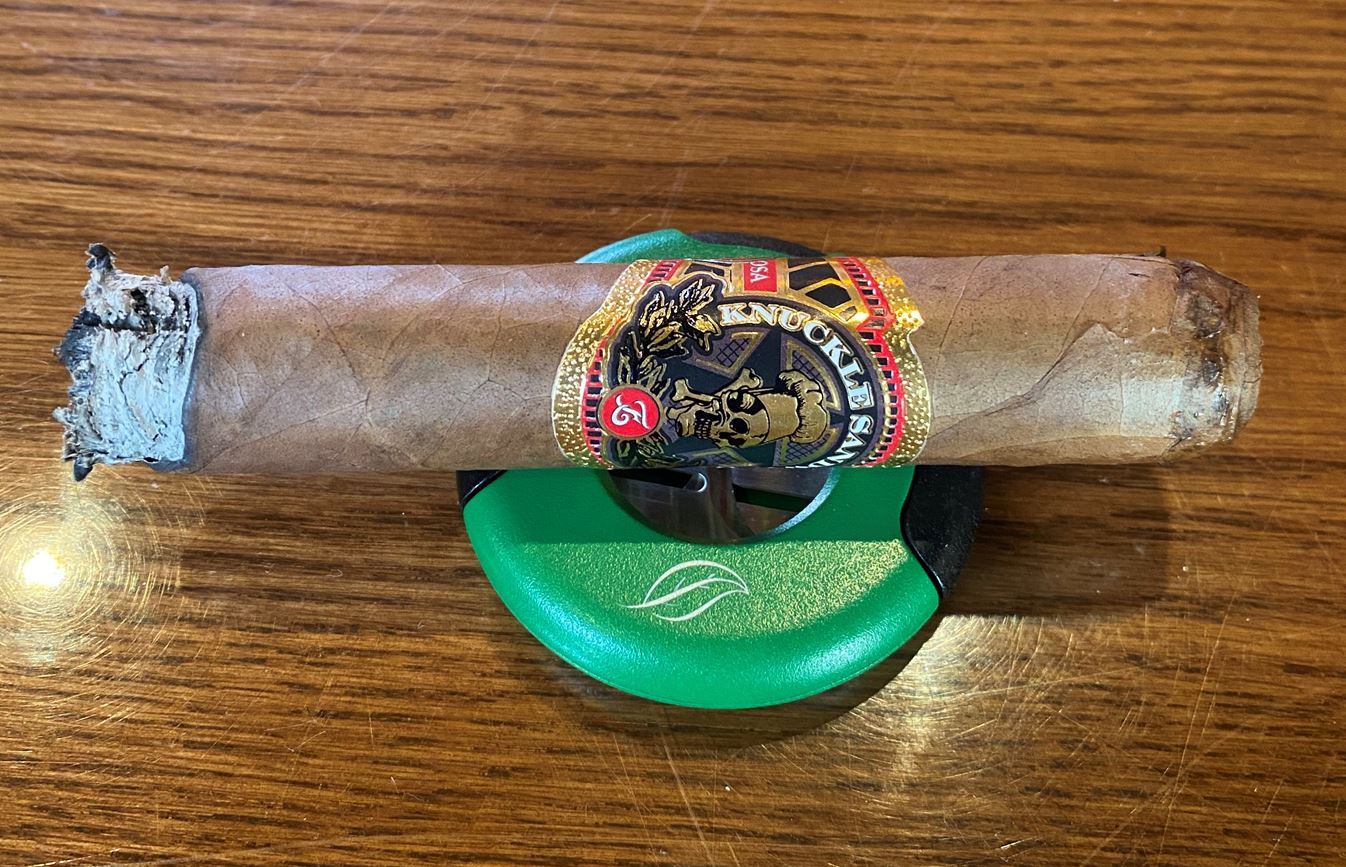 Now as for my particular impression of this cigar, I was surprised by not only the above-mentioned balance, but by the number of different flavors.  At one point or another chocolate, dark coffee (like weak espresso), cream, unfermented fruit, cedar, red pepper similar to a shot of cayenne hot sauce, graham cracker, vanilla, and caramel made an appearance. I know, that’s some list, but this is some cigar. These flavors progress, change, move to the background, and leap to the forefront in an almost playful way. I can’t quite say if I’ve ever experienced a cigar like Knuckle Buster Habano—it just has that little something extra.

And maybe that something extra is a chef’s touch. This cigar smoked like a perfectly executed and savory meal—like you’d find at one of the joints Guy visits on Diners, Drive-ins, and Dives. As far as who’d like Knuckle Sandwich Habano—it’s an ideal blend for those seeking out a rich, full-bodied, Nicaraguan loaded with character and complexity.

Construction: The not-especially oily Habano wrapper has a weathered leather color, and is finished with a single cap. Well-rolled.
Draw: Open, with really good airflow – but not a huge amount of smoke.
Pre-light flavor: The wrapper has a scent of cocoa; the taste is lime citrus and the littlest bit woody.
Toasting & Light: Charred wood, espresso.
Base flavors: Pepper, coffee, cream, cherries/berries (“fruit sweetness”).
Retrohale: Heavy on spice and cedar.
Aroma: Sweet like graham crackers, and a bit woody.
Burn & Ash Quality: Burns straight; the salt-and-pepper ash stacks nicely, albeit a bit flaky.

Guy Fieri’s cigar starts with some really dark, sharp flavors – after a couple of rips and you’re at 1/8” in, Knuckle Sandwich eases in; the espresso taste stays, and starts to show some Habano tanginess. It tastes like berries – or maybe a cherry? I can’t make up my mind, so I’ll use both. This first third also develops a wicked, almost foamy creaminess. The Nicaraguan pepper is sneaky: as I was writing notes in between puffs on the cigar, the long finish slowly fades – and there it is, the last taste revealed after the others peel away.

Those flavors dig in for the long haul, staying consistent through Knuckle Sandwich’s second 1/3, fading as it hits the next transition point. The last third drops the creaminess and hits with straight wood, and earth, and this big pepper note grabs the stick to land the plane. 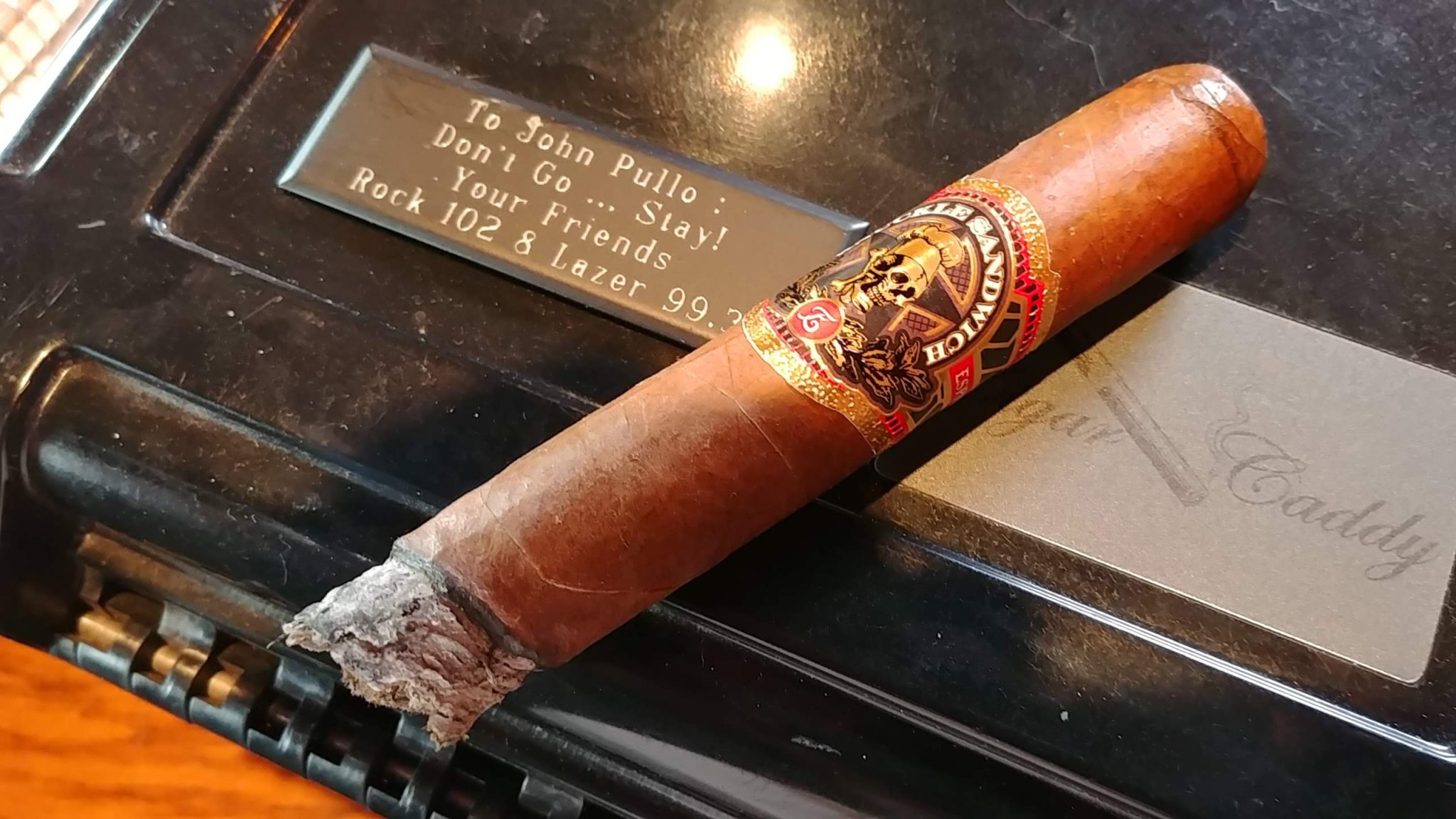 The signs say this Guy Fieri cigar is an actual collaboration, meaning the Mayor of Flavortown had significant input on its taste. Having smoked it, I’d say Guy was responsible for the first half, with Erik Espinosa contributing the second. The flavors are really well-balanced and that actually made it a little difficult for me to pick them out – but the most obvious are the cream, berry/cherry and the pepper on the finish.

If you like watching Guy and you like smoking cigars, then you already know you’re going to try it. Same, if 601 is part of your rotation. But if I’ve learned anything from watching Triple D, there are basics all good food has: texture, there’s gotta be some flavor, balance, along with presentation and construction. It’s the same for cigars. Guy Fieri/Espinosa Knuckle Sandwich Habano certainly has those. But you also have to be open to experiment – try new things and get excited about it. In that spirit of discovery, I’d totally recommend this cigar if you’re ready to get out of your established, well-worn groove of regular smokes and need a reality check. And who knows? When you find out you like it, you and Guy Fieri have something in common.

Wow, talk about pepper. If there was any doubt in your mind that this would be a properly strong Espinosa, let my cigar review of Knuckle Sandwich quell that now. The first few puffs of Guy Fieri and Espinosa’s collaboration are potent and filled with notes of hot peppers. Especially through the retrohale. On the palate, I’m getting sweet notes that taste faintly of honey, among flavors of wood and earth.

Pepper is still Knuckle Sandwich’s most prominent flavor a few inches later. It’s a bomb for sure, but a tasty one. Nuttier notes like roasted almond and a bit of cashew, are also entering the fray. And that’s when I realized that the aroma is almondy, too. The honey sweetness has died down a bit and it’s a bit butterier now. Almost like butterscotch. This gives the smoke a nice thick, velvety mouth feel. 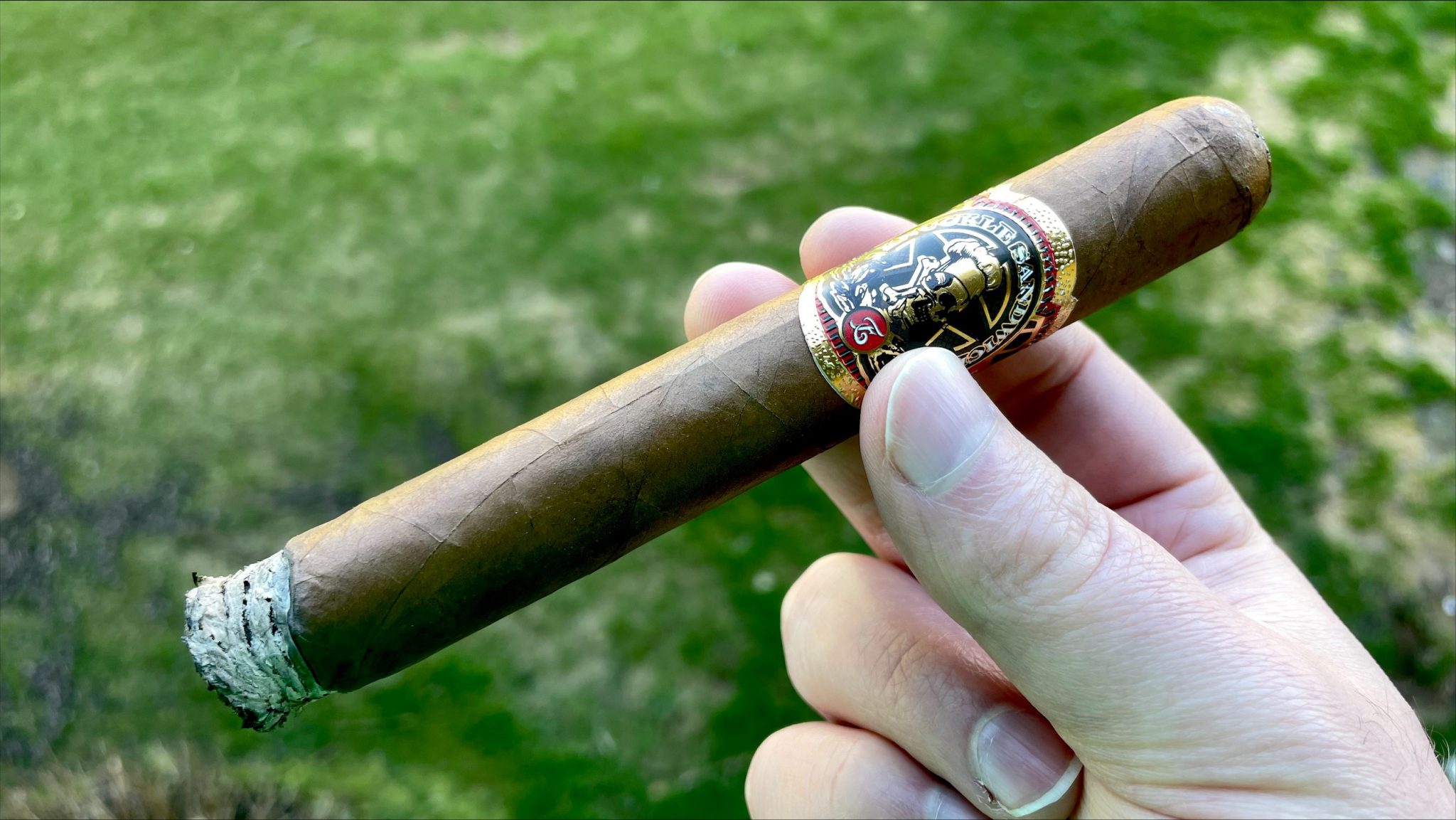 What I love most about this cigar is that you can tell Guy Fieri had a hand in making it something special. No knock on Erik – he does strong cigars extremely well – but Knuckle Sandwich is a bit more nuanced than what we normally see from his creations. Being made by AJ Fernandez probably plays its part, too.

Toward the end, the smoke has become mostly earth and nutty. The pepper is still there. Sweetness is now an afterthought. And the finish is really long. I’d pair the cigar with Skrewball Peanut Butter Whiskey. It’ll play nice with Knuckle Sandwich’s nuttier flavors and help take some of the edge off the pepper. Bottom line: Guy Fieri’s contribution has stirred up a fresh take on the brand that will assuredly bring them new fans while keeping true to longtime Espinosa fans.

Construction: Well-rolled and firm with no soft spots. The wrapper has a silky feel to it and the cap is affixed with a triple seam cap.
Draw: Excellent, with good smoke output at the head.
Pre-light flavor: A combination of sweet tobacco and a nip of coriander.
Toasting & Light: Very good. Opening notes are red pepper and damp earth and a subtle sweetness.
Base flavors: Hazelnut, nutmeg, vanilla caramel, sweet & peppery spices, leather.
Retrohale: N/A
Aroma: Spicy.
Burn & Ash Quality: Excellent. The burn is clean throughout, revealing very firm dark grey ashes.

Summary: The Knuckle Sandwich Toro opens with a red pepper snap, but once you get past the first inch, everything falls into place. The smoke is medium in body and very smooth with a well-defined hazelnut flavor. Light notes of vanilla caramel and nutmeg also tease the palate in the early stages. Leather is added to the mix in the midsection, and this is also where most of the flavor action takes place. I experienced a smooth and well-balanced mix of sweet spices with more of a medium-plus body. By the final third the cigar leans further into full body territory with mostly spice, leather, and earthier notes remaining. 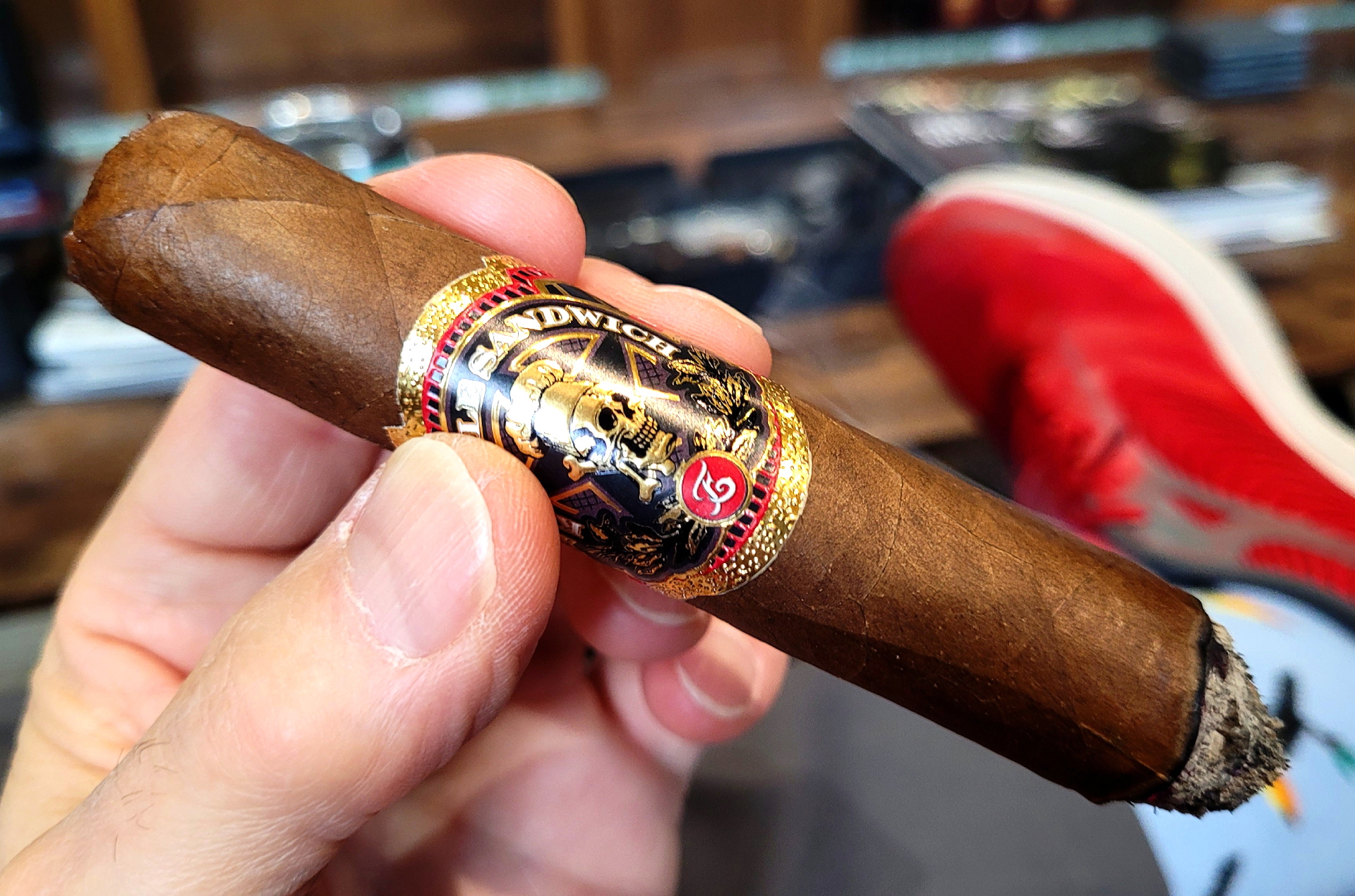 As I said in the video, I’ve never been a fan of so-called “celebrity cigars.” Yet, this 6×54 Knuckle Sandwich Toro was right in my wheelhouse. And although others on the Panel felt it was full-bodied, I maintain that not new, but newer cigar smokers should be able to handle it. Since it seems to deviate from the more emblematic Espinosa/AJ recipes, we mostly agreed that Mr. Fieri had a say in this blend. The cigar does exhibit a certain gourmet esprit, in that, the flavors were layered, well defined, and offered some nice, unexpected surprises. All-in-all, the Espinosa Knuckle Sandwich was an enjoyable smoke that I can get behind.

You guys made me 2ant to get a box of these to smoke!

Thanks for reading, Stanley. Please let us know what you think when you try them!

I have met Chef Guy 3 times. He really is who he presents on TV and is truly passionate about everything he loves. From his family to his industry to supporting our armed services and public safety. I have been able to witness his awareness of being a damn good human. If he put a 10th of his passion into these cigars that he does into his other projects, I will be buying these sticks!

Steve, Thanks so much for reading. We were thoroughly impressed for sure.