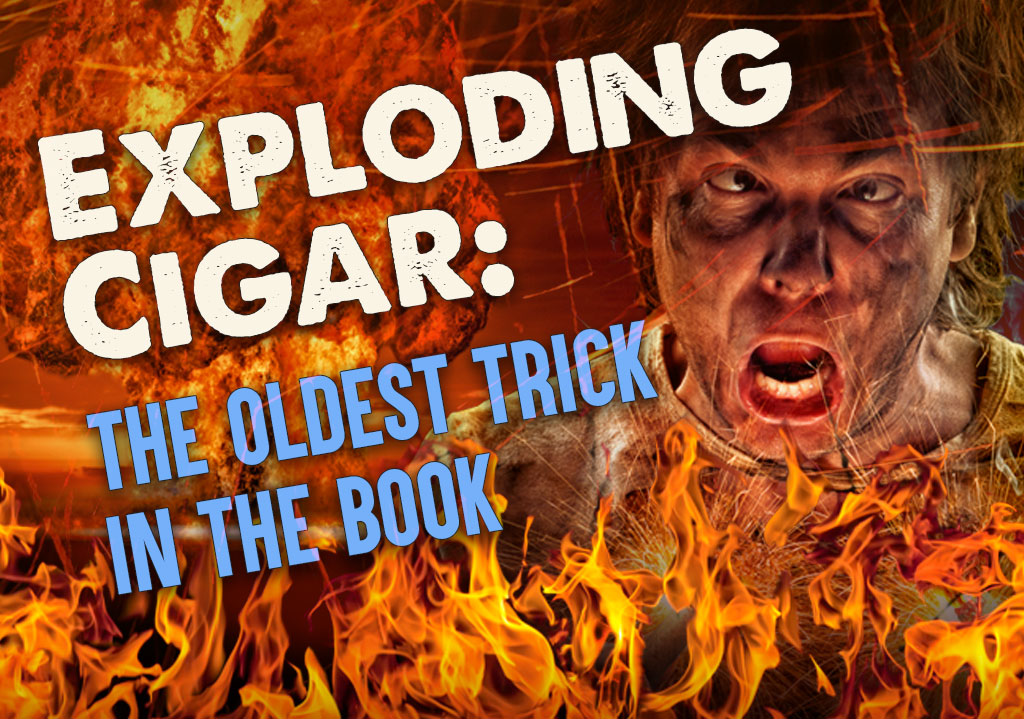 Exploding Cigar: The Oldest Trick in the Book

Exploding Cigar: The Oldest Trick in the Book

Give a man a fish, he’ll eat for a day; give a man an exploding cigar, hilarity ensues.

Ryan does our social media here at Cigar Advisor. He found his way into some of the big ring cigars in our stash, as well as some just-the-right-size firecrackers – and decided to have some fun at our expense. Because our work is in the cigar world, it was that natural fit that made for pulling off one of the best office pranks we’ve seen in a long time – even though we were his marks.

All work and no play makes Ryan a dull boy. And here, no ordinary office prank will do.

How the Exploding Cigar Prank is Done

We’re not telling you. It’s dangerous, and fortunately for us, no one got hurt. What was supposed to be one unsuspecting victim, became eight targets; Ryan just couldn’t help himself. And in case you were wondering, the final tally on the exploding cigars was as follows:

One of his more expensive office pranks; but worth it. “Worked better than I thought. And for Cory to jump that high, I couldn’t have bought that kind of freakout for 60 bucks.”

We like to think we’re pretty smart guys, but we’re almost ashamed to admit that we got taken by the exploding cigar. Almost. One word of warning to you, if you’re thinking of pulling a fast one on any of your fellow brothers of the leaf: don’t mess with his cigars. They’re pricey, and he may not be as good a sport as we are when you blow up his Hemingways.

Watch it all happen:

Cory: “Brazilian Mata Fina my ass. I will never accept anything from Ryan again. Ever.”

Khuong: “I enjoy all kinds of pranks and shenanigans, I just prefer to be on the other end of the joke.”

Jim: “That’s our conference room. Everyone was in on the joke, except Tim (on the left). What I didn’t know is that Ryan gave me an exploding cigar, too. He got 2-for-1. Jerk.”

Fred: “As office pranks go, let’s just say these guys go straight for the hard stuff. I guess I got picked since I’m the new guy. Trial by fire, right? Watch Gary jump in the background – now that’s funny.”

John: “That last clip is around the bar at Leaf, where we shoot our reviews; this one was supposed to be a short product demo for La Gloria Serie R Black. I knew he was doing it – I just didn’t think he’d go after me. Payback is a bitch.”

Share with your friends – we’re big boys, we can handle it.

Hoping the hilarity would brighten up the isolation……oh well, grabbing a Quattro
DAMN YOU, YOUTUBE!

Reading Time: 4 minutes Everyone knows that Romeos earn high ratings in the magazines. But what are the customers saying? We’re highlighting the Top 5 Best-Rated Romeo y Julieta Cigars as chosen by consumers just like you! Bonus – they’re all under $10!