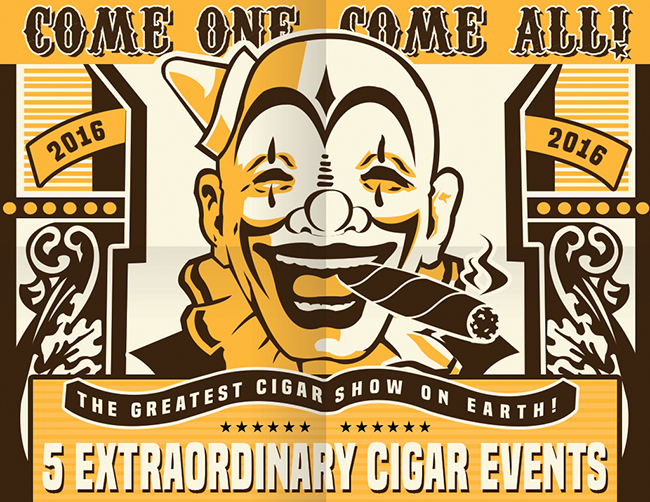 CA Special Report: The 5 Most Extraordinary Cigar Events of 2016

Top 5: The Most Extraordinary Cigar Events We Witnessed in 2016

No doubt about it. 2016 was one of the most extraordinary years in recent history. Among the standout stories, at the top of the list was the election of Donald J. Trump, making him the 45th President of The United States. Then there was “Brexit,” as Great Britain exited stage left from the European Union, while terrorism continued its bloody rampage around the world, and the war in Syria raged on.

2016 also had a record number of rock star deaths, among them, Prince, David Bowie, and Leon Russell. Brad and Angelina filed for divorce (who’d a thunk it in Hollywood?), as did Kelly Ripa and Michael Strahan. Michael Phelps continued to bathe in gold, Leo DiCaprio finally got an Oscar, and of course, there’s never a dull moment when it comes to Kim & Kanye (but ask me if I care). For cigar lovers, there were some very significant developments this year that impacted the premium tobacco industry – and not all for the best. These are the 5 biggest cigar events of the past 12 months:

While all of that and more was happening, the premium cigar business had its share of news, starting with a move by the Federal Drug Administration, which essentially put the kibosh on the entire industry when it announced its “Final Rule” in May of last year that new tobacco regulations would treat premium handmade cigars just like every other tobacco product, namely cigarettes. Here is the summary of the government’s press release issued on May 5th, 2016:

On August 8th, the proverbial “shit” hit the fan, as the regs officially went into effect. Prior to all of this, there were two options on the table: Option 1, which included all tobacco products, including cigars – both hand and machine-made – and Option 2, which would effectively exempt premium handmade cigars from the ruling by the sheer nature of the product, putting them into a subset group. The verdict?

[The] FDA has concluded that Option 1 (including all cigars, rather than a subset) more effectively protects the public health and, therefore, has made that the scope of the final rule.

With the FDA’s decision came myriad rules with regard to future premium cigar packaging, including specific verbiage that must appear on the packaging as well as verbiage for advertising. And regarding the actual blends, themselves, the tobaccos used must be a “substantial equivalent” to any blend released prior to February 15, 2007. Exorbitant legal and manufacturing costs to the manufacturers go along with all of this, which is why a number of brands released after February 15, 2007 will likely cease to exist at some future date, including many so-called “boutique cigar” brands. It’s also why cigar smokers are already seeing a return of pre-2007 brands to the market, like the famed Perdomo La Tradicion cigars selection.

And the fight from the cigar manufacturers continues. . . from trying to stifle the FDA’s actual funding of the Act, to an omnibus bill that would place premium handmade cigars into the subset category originally called for in “Option 2,” and other tactics. Stay tuned for more about this in 2017. The war is far from over with the added hope that the Trump Administration will have a hand in turning things around.

Due to the pending FDA Ruling, in July of last year, it was a mad dash for every premium cigar manufacturer participating at the 84th annual International Premium Cigars & Pipe Retailers trade show in Las Vegas to get as many cigars into the market as possible. As a result, the industry saw a record number of releases. Factories pushed workers to their limits rolling and banding on an almost 24/7 schedule. Many cigars released at the show were still undergoing their post-production aging periods.

Some of the new cigar stars of the IPCPR included the Fonseca Nicaragua from Quesada Cigars; the Padrón 90th Birthday edition, Macanudo Mao; Intemperance Whiskey Rebellion 1794 from RomaCraft; the Time Flies selections by Foundry Cigars and A.J. Fernandez; the Montecristo Pilotico, Cohiba Macassar, Joya Black, Davidoff Yamasa, Camacho Check 6, and Nestor Miranda Corojo, and My Father The Judge, and Espinosa Crema, to name but a dozen, among a throng of others.

You could also say that it was the year of A.J. Fernandez. In addition to the Time Flies cigars noted above, A.J. also did Hoyo de Monterrey’s Hoyo La Amistad, Foundation Cigar’s The Tabernacle line, the Aging Room Small Batch Pelo de Oro, and for 2017 will be making cigars with Erik Espinosa, Rocky Patel, and who knows who else? It seems that the thunder José Pepin Garcia was making throughout the industry more than 10 years ago, Señor Fernandez has all but stolen – and deservedly so.

Not unlike the Cigar Boom of the 1990’s, during this decade the beer industry has seen an exponential increase in breweries, especially for craft beers. By 2015, the craft beer industry expanded by 15% in both the U.S. and abroad. The main reason for this is that beer drinkers today are much more experimental, continually on the lookout for new flavors and more creative approaches to making beer. (Sounds like most cigar smokers.) Adding to this excitement is the sheer competition of it all, as artisan beer makers try to stay one step ahead of each other. Additionally, drinking beer has taken on a new form of social status as beer lovers opt for more exclusive brews over the highly-advertised fare.

The libation’s newfound popularity has also helped make beer the “it” pairing for cigars. To aid beer drinkers in finding the perfect smoke for the perfect beer, cigar and beer pairing guides have sprung-up online. Hearty beers tend to go well with full-bodied cigars, like Magic Hat’s “Heart of Darkness” with a Cromagnon Aquitaine Anthology, while lighter, sweeter brews help bring out the flavors in milder cigars, like pairing a can of Caldera Brewing Co.’s. “Lawnmower” beer and a Macanudo Hyde Park. Even more interesting is how so many craft beers pair well with boutique cigars, as if they were made for each other.

One of the biggest cigar events of 2016 was the Obama Administration’s easing of travel restrictions between the U.S. to Cuba. Embassies in the respective countries reopened, and the future looked bright for cigar smokers who always wanted to get their hands on some genuine Cuban cigars. Of course, the island nation still has its problems, and even with Fidel now at room temperature, not much, if anything, has changed for the majority of Cubans.

According to a recent report on Cuban tourism by Tourism Review, thanks to the new relationship between Cuba and the U.S., the number of tourists coming into the country has been growing fast, but the record number of travelers, upwards of almost 4 million between the U.S. and other countries, has caused a serious food shortage.

The report also stated: “The goods that Cubans used to have [are] not available any more. The food goes to the rising numbers of tourists that can afford to pay prices which the locals cannot. The reasons for the dire effects of [the] Cuban tourism boom is, according to experts, not only the U.S. embargo, but also insufficient governmental planning.”

Revenues from Cuban tourism go mostly to the nation’s growing private sector. That’s a good thing. But most Cubans still work for companies run by the State, and just buying a couple of pounds of vegetables can suck-up 10% of a standard government salary, which is about $25 a month.

According to Juan Alejandro Triana, an economist at the University of Havana: “The government has not invested sufficiently in the agriculture for a long time. The produce planned for 11 million people cannot feed the 3.5 million tourists as well.”

And as far as all of those avid cigar consumers are concerned, there’s a caveat to buying Cuban cigars: U.S. citizens can bring back as many Havanas as they like – as long as they are brought in directly from Cuba.

A recap of 2016’s cigar events wouldn’t be complete without mentioning the cigars that made the “Best of The Year” lists. Whether you put any faith in these annual lists, or not, they sure do sell cigars. When Cigar Aficionado revealed the La Flor Dominicana “Andalusian Bull” as their #1 Cigar of 2016, cigar retailers across the country who were lucky enough to have that cigar in stock, sold-out in a matter of minutes. Other notable mentions that made Aficionado‘s Top 10 included the Rocky Patel Sun Grown Maduro, E.P. Carrillo Seleccion Oscuro, Herrera Estelí Norteño, and the Padrón 90th, to name four, not to mention the zine’s obligatory Cuban cigar finalists. This year, it was the Partagás Serie E. No.2 and the Hoyo De Monterrey Epicure No.2.

Although many cigar smokers turn to the Aficionado list to boost their collections, there is another annual list; the Top 25 cigars of the year as chosen by Cigar Journal. They went with the San Cristobal Quintessence Robusto as their #1 pick. Notable mentions from Cigar Journal‘s list also included the Aging Room Pelo de Oro, Perdomo Small Batch 2005 Maduro, A.J. Fernandez Enclave Salomon, El Centurion H-2K Connecticut, and two Davidoff cigars – the Davidoff Yamasá Piramides and Davidoff Escurio Corona Gorda.

Both lists were also in agreement on the Davidoff Yamasá, the A.J. Fernandez Enclave, and the El Centurion H-2K Conn. Toro, as well as the Villiger San’Doro Colorado Robusto.

What cigars would you have included in your own list? Feel free to add them to the comment section.

See you at the end of this year – same time, same place!

The FDA scam has nothing to do with public health. Much rather money and regulating our lives.

I never concur entirely with CA’s list. Especially with #1 selections. I put more stock in the other lists. And the cigars should be available in the US.

Read More
Cigar Ratings & Reviews
The 601 Green Label Oscuro selection is Cigar 101 in action: just because it's darker, doesn't mean it's stronger. But it's still a 601, so there's still plenty of pep. What else makes it great? See the notes in my short review for the 601 Green Tronco: it was My Weekend Cigar, and there's plenty to enjoy. Read it now!
Read More

Top 5: My Favorite Famous Cigar Smokers of All Time