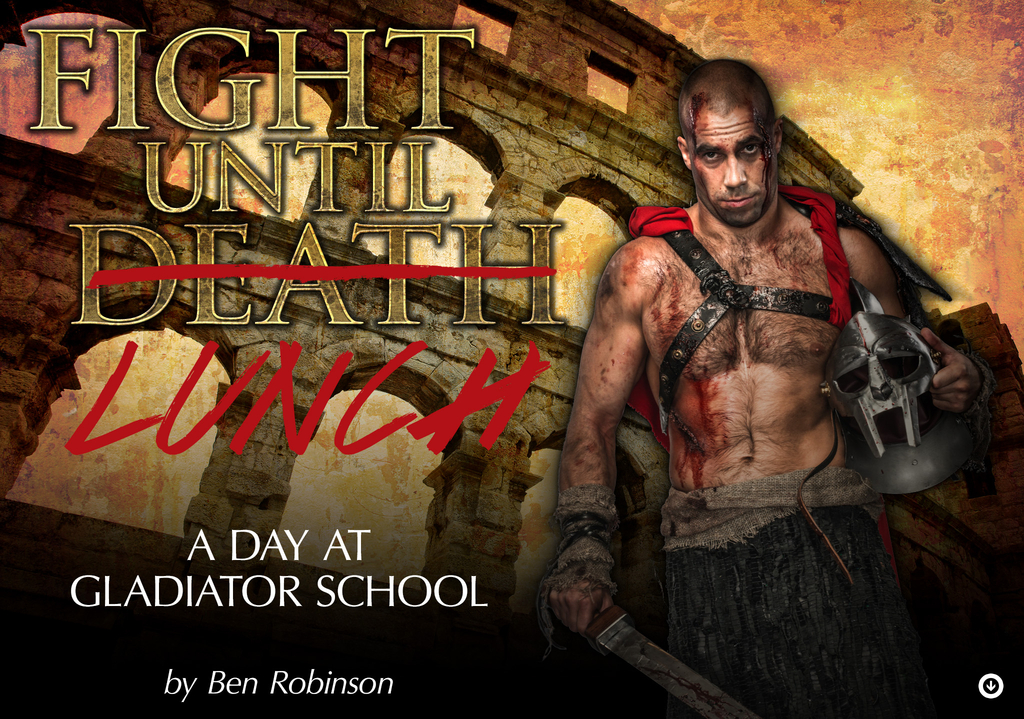 Fight Until Lunch: A Day At Gladiator School

In Ridley Scott’s film epic Gladiator, as in the actual ancient Rome it represented, the emperor would determine whether a warrior would live or die with a simple thumbs-up or thumbs-down. It was perhaps the most representative example possible of the brutal simplicity of the life of a gladiator — so uncomplicated that a flick of the wrist could determine whether it continued through the next battle, or was swiftly ended by a salivating lion who hadn’t eaten any Fancy Feast in, like, four days.

At Scuola Gladiatori Roma, that simplicity lives on — something you’ll realize as soon as they force you to take off your fancy, complicated Dockers, and toss on a tunic and some extremely rudimentary metal armor. You are now a gladiator. Or will be, once you finish the daylong course at the sparsely outfitted compound in Rome, home to the world’s only accredited — yes, accredited! — gladiator school. 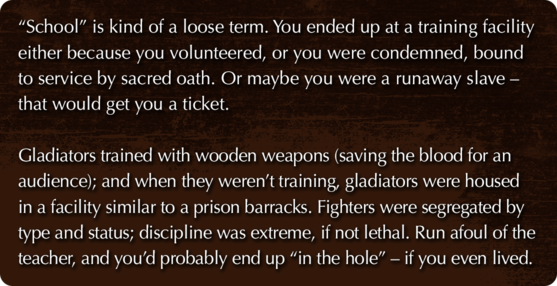 As if it were the coolest middle-school math teacher ever, Scuola Gladiatori insists that all students understand the “how” and “why” of hand-to-hand long before they’re allowed to put their hands on each other, or any weapons for that matter. With that in mind, the day begins with a walk-through of a museum packed with the tools of the savage trade: replicas of armor, helmets, and swords, plus ballistas and other heavy equipment used in wars, in addition to dioramas of great battles past — if you don’t know about the tortoise formation, you’re damn sure going to know about the tortoise formation by the end of it. (Pro tip: it always beats the hare formation).

And then, as if it were the coolest middle-school gym teacher/Olivia Newton-John ever, Scuola Gladiatori says “let’s get physical.” Instructors will set you up with that tunic, a pair of sandals that definitely aren’t Tevas, a belt, and an iron-and-leather pair of protective gloves, before throwing a wooden sword in your hand. Go ahead, exclusively refer to it as a “rudis.” You’re learning things.

From there, it’s time to get down — or maybe up, as down isn’t exactly the best place to be in a gladiatorial ring — and dirty. Since even gladiator battles needed undercards, there were four different classes of warrior in ancient Rome. And while the competitors often found it difficult to advance to higher levels, what with all the, well… dying… you’ll be able to slash your way right through the ranks in nothing more than an afternoon.

For your handy referencing purposes, here are the six kinds of gladiators you just might end up temporarily becoming:

Murmillo: As heavily armored as he was, the Murmillo had to be at least something of a big dude. A big guard on the right arm protected that appendage, while a gigantic curved, legionnaire-style shield protected everything else. Lying on the ground and hiding underneath the shield is allowed, but not recommended.

True to the Hollywood image, gladiators were heavily built; and they ate like it, too. Mostly vegetarians, they increased body weight not only to be harder to push around, but to protect themselves against deep wounds. They were nicknamed ‘barley eaters’ because of their diet, carbo-loading on porridge. 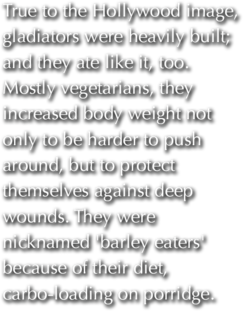 Retiarius: The Aquaman of gladiators. These guys were modeled after the most vicious of all combatants: fishermen. No, seriously. Fishermen. But they had their advantages: a long trident whose width meant it didn’t have to be as precise as a sword, a weighted net that could be used to ensnare or at least trip up opponents, and minimalist armor, which kept them light and lean and mobile.

A trident was great, thanks to its long reach and ability to trap other weapons between its prongs. And yes, it really was like fishing – well, spear fishing, anyway: Retiarius cast his net to trap his opponent, then used the trident to kill him. 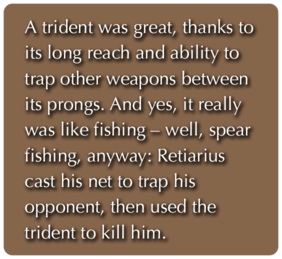 Thraex: The Murmillo’s classic opponent. He did his work with a small rectangular shield and short sword with a curved blade called a sica, which was especially useful against the Murmillo’s unarmored back. The Thraex got equipped with shin armor because his shield was so small, and because his sword was so short, likely got peppered with insults from his fellow gladiators.

Secutor: Here’s who goes up against the Retiarius — you remember, Aquaman. The armor/weapons setups to encourage fair fights between the two was pretty ingenious. As the Retiarius jumped around all lithely, the Secutor was weighed down by a gigantic shield and sword. But his thick helmet had tiny slits for eyeholes to avoid the sneaky pokes of the thin trident, and a smooth, unadorned top so nothing would get caught in the net. Somebody thought this through frighteningly well.

Hoplomauchus: Our first gladiator with two sharp weapons: a long lance, and a small sword he hid behind his rounded shield. Generally went up against the Murmillo.

The helmet might sound great, but not so much. Since it was so heavy, and it didn’t offer a lot of room inside, Secutor had to dispatch his opponent quickly – otherwise he was likely to pass out from the exhaustion that set in because of wearing it.

Because carrying two weapons, a shield and having a big dude like the Murmillo chasing him around the arena wasn’t enough of a “challenge,” history seems to think that these guys didn’t wear shoes, either – as running through the sand just made things more “interesting.”

Amazon: The Amazon was the lone female gladiator, and she usually lived up to her name: tall as can be, and capable of handling all the heavy weaponry. No helmet necessary. Today it sells Blu-rays of Ridley Scott movies online.

So there you go – Maximus or Spartacus, you can train like a gladiator at Scuola Gladiatori Roma – the only genuine gladiator school in the world. So legit, they have their own page on Tripadvisor. Depending on how deep you want to get (and the demand in your area for classically-trained arena fighters), you can train there for years, specializing in certain weapons and fighting styles. Not as much free time on your hands, or maybe you don’t want to commit to the slave-warrior lifestyle? They offer a “Gladiator for a Day” crash course for a taste of ancient Rome. And since nobody loves gladiators more than nine-year-old boys, Gladiator School is as family-friendly as deadly-warrior training facilities come. So whether you’re with the whole crew or looking to learn a little something about how to wield a trident by yourself, Scuola Gladiatori gets a wonderfully simple thumbs-up.

Are you not entertained?

Women really fought in the arena? Yup. There’s writings about female charioteers, as well as documentation that Nero staged girl-on-girl gladiator shows. Under other emperors, the ladies fought wild animals and pygmies – though not both at the same time.

Ben Robinson is an Event Coordinator for Operation: Cigars for Warriors.

Read More
Cigar Lifestyle
The Advisors are back to matching more music and cigars. This month, we’ve featured Reinier Lorenzo of HVC for his take on a perfect pairing. Read now!
Read More