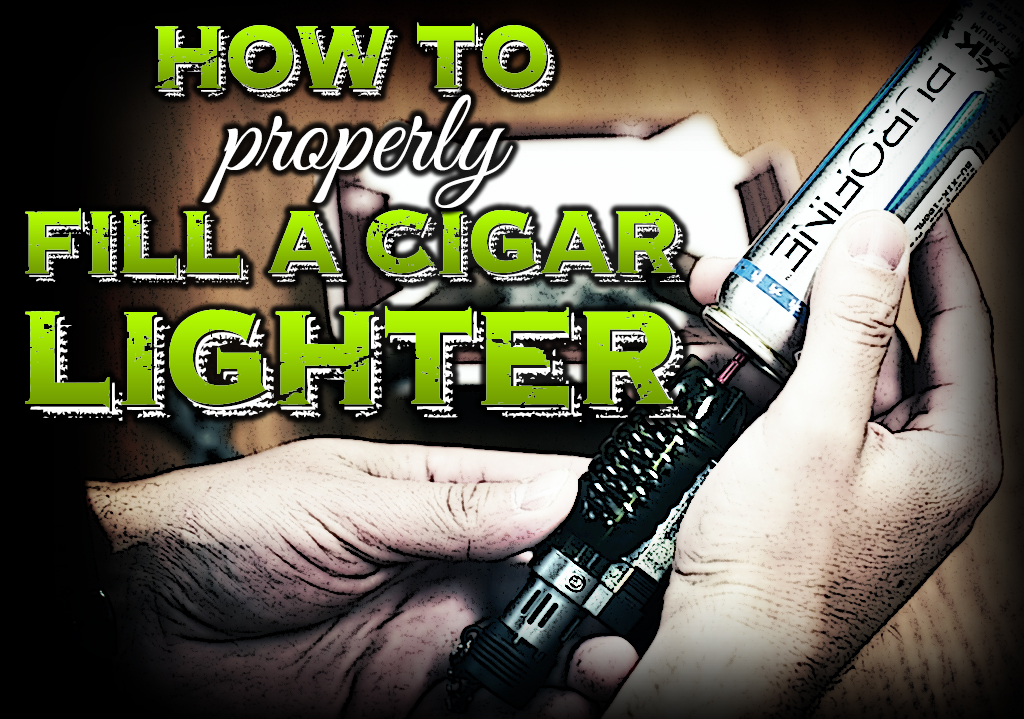 Some things are so intuitively easy you hardly have to think about them. Starting a car, making coffee with a K-cup, buttoning a shirt. You’d think that refilling a cigar lighter would be just as simple, right? Yes, but there’s a little more to it than you think, and by following the instruction guide below, you’ll not only learn how to fill your cigar torch lighter correctly, you’ll add many more months, even years, to its lifespan.

Torch or jet flame lighters are the most commonly used lighters among cigar smokers. They run on butane, a liquid gas that’s easy to find and relatively inexpensive. But when filling or re-filling your lighter you don’t want to use just any butane. You want the most refined butane, not the stuff they sell behind the counter at the corner convenience store. The reason for this is, the more refined the fuel, the less impurities in the gas. For example, Vector butane is refined five times, while Xikar’s Purofine™ butane is so highly refined that the level of impurities is less than 15 parts-per-million, making them both excellent for use in all jet flame lighters. The cleaner the fuel, the more efficiently your lighter will work, which means the chances of clogging are also greatly reduced. Never use any fuel that is not at least triple refined.

TIP: Before filling your lighter DO NOT SHAKE THE CAN of fuel. This will cause the gas propellant to seep into the fuel tank during filling.

The first thing you want to do, even for a new lighter, is release all of the fuel tank’s pressure by depressing on the inlet valve located on the bottom of the lighter. To do this you can use a small screwdriver, a ball point pen, or a cigar accessory that comes with a “bleeder.” Some lighters even include a bleeder in the box. Depress the valve holding the lighter in its upright position, as you do when you light your cigar. Repeat until you no longer hear any hissing coming from the valve. You can also release the air pressure by pressing the ignition and holding the trigger down until any hissing ceases. 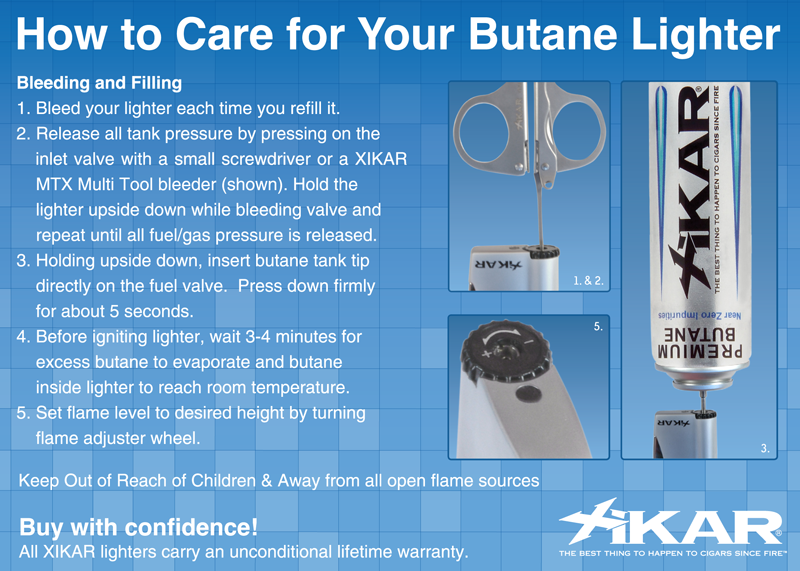 Next, turn the flame adjustment to the lighter’s lowest (-) setting. This keeps the opening tight for a more efficient filling, and helps limit the amount of air that could get in by keeping the adjustment dial open to full bore. Turn the lighter upside down and insert the tip of the butane valve over the fuel valve. Now, press down firmly and hold it for about five seconds. If your lighter has a fuel tank window and it looks like it hasn’t filled completely, you can repeat this procedure, but keep in mind that it will only fill-up so much. It’s almost impossible to “top-off” a butane lighter. After filling you’ll notice that the can and the lighter will be very cold. Wait three to five minutes before igniting the lighter. This permits any excess butane to evaporate, and will bring the liquid gas up to room temperature. Finally, set the flame adjustment dial or wheel to the height you prefer. Do not open the valve all the way. This will not only cause the flame to shoot out like the exhaust pipes on a dragster. It can also cause the flame to cut out, and more importantly, you’re wasting fuel. Start by adjusting the dial to its midway point. This should give you a good strong flame and then you can adjust it up or down from there.

TIP: An optional trick that will help you fill your lighter more efficiently is to place your lighter in the freezer for about 5-10 minutes. This lowers the air pressure in the lighter. By doing this, when the sub-zero gas hits the freezing cold lighter the fuel will enter faster and more completely. If your lighter has a fuel window, you’ll notice the increase in speed that it fills-up.

Filling a lighter at high altitude

If you happen to live in a high-altitude part of the country like Denver, CO, it is critical that you use fuel that is at least quadruple-refined and higher. Also, make sure that you keep your lighter’s fuel tank as full as possible at all times. As before, you want to allow the fuel temperature to reach room temperature. One way to do this is by simply holding the lighter in your hand for a minute or two. You can also put the lighter in your pants or a shirt pocket. Next, adjust the flame dial or wheel to the (-) setting. This will allow more oxygen to enter the combustion chamber and will improve your lighter’s ignition and flame height, by compensating for the lack of oxygen at higher altitudes. At lower altitudes, turning the adjustment wheel towards the (+) setting will increase the fuel flow. When igniting, depress the trigger slowly until you hear the gas hissing out, then finish depressing the trigger to ignite the flame. Do not do this repeatedly to ignite the flame faster. A slow, deliberate, motion will decrease ignition failure. In-between cigars, when you’re not using your lighter, keep the adjustment setting at the midpoint as mentioned above. The next time you light your cigar adjust it by turning the dial higher or lower as needed.

Storing your lighter after use

If you plan on storing your lighter for a long time period, wait until you’ve used up as much fuel as possible, then empty all of the remaining fuel. If you did not completely empty the lighter before storing and the lighter has not been used for a long period of time, when depressing the ignition trigger it may appear to be no longer working. If so, simply empty all of the fuel from the lighter as described in the first paragraph under “Filling your cigar lighter” above, then refuel and adjust the flame level as noted. This should help fix the problem.

thank you! that was so informative and well said. definitely a lot of help for beginners and even people who just want to use their product more efficiently.

Thanks for the instight. I was having issue’s because I read some info on the net that was not true. I wish I didn’t throw out my old lighters now. Maybe emptying the gas would have fixed the issue’s!

Butane lighters don’t actually take pure butane… They use a variety of different fuels. Typically a propane based blend with butane taking up less than 5% of the mix. If you were to fill a lighter with pure butane you’d have a very disappointing flame, if you got any flame at all. Butane is not high pressure.

All those butane refills you mentioned, vector, xikar, etc, all use a blend consisiting of propane, propylene, and a variety of other alkanes. Propane is what gives a torch lighter the ability to shoot it’s flame over a distance and ignite at temperatures near freezing.

Reply
How do I know if my lighter is butane or lighter fluid? – AnswerParadise.net