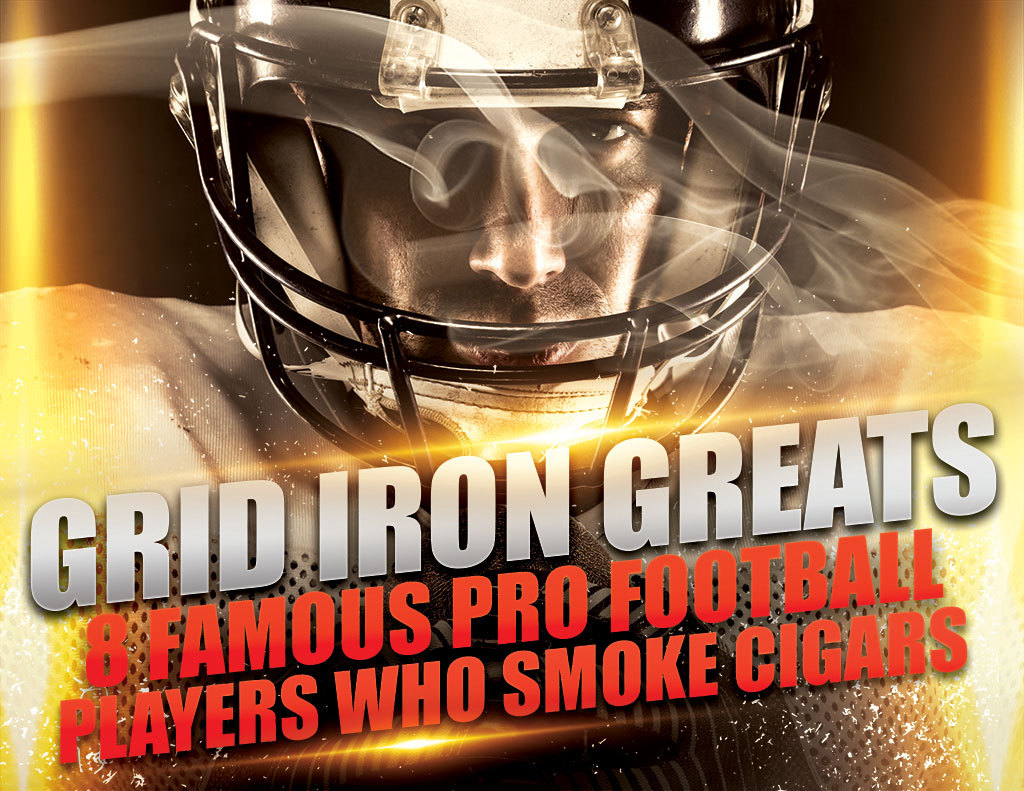 That’s right, the playoffs are back and that means more NFL action, more on-field drama, and copious amounts of alcohol whether you win or lose. While cigars and athletics have little cross over, there are more than a handful of brave men from the world of football who have indulged in the rich flavors of premium cigars. Hopefully, a good cigar is part of you playoff ritual, too. So as we look forward to this season’s climatic end, let’s talk about some of the legendary football players who smoke cigars – and what they did to make the game what it is today.

I realize your team might have been knocked out early; and Browns fans, well…yeah. Nice parade. No matter: grab your jersey, order another round of wings and beer and get ready for some high octane post-season football with my list of the greatest coaches and football players who smoke cigars,  and share your love of the leaf. I’ve even added their preferred smoke of choice:

Ditka is perhaps one of the most legendary players and coaches in NFL history – being the only Super Bowl winning coach to have also scored a touchdown in a Super Bowl. Being a 5-time Pro-bowler and also coaching the second greatest team of all-time, Ditka is a self-proclaimed cigar smoker. So much so that he’s partnered up again with Ron Jaworski for their 9th annual private cigar party which features modern athletes and celebrities alike. Ditka’s smoke of choice? His own, of course – the Mike Ditka Signature edition by Camacho.

The Polish Rifle Ron Jaworski loves him some cigars. After a successful career with the Eagles, taking them to their first Super Bowl appearance, along with an impressive broadcasting career, Jaworski also organizes a “Cigars with the Stars” event with the aforementioned Mike Ditka and Camacho. The event features athletes and celebrities of all caliber, Scotch, and cigars, of course.

Who would’ve guessed the Pittsburgh Steeler’s No.1 draft pick, mocked as a simpleton and country boy early on, would go on to win four rings in the Big Dance? While Terry Bradshaw’s stats and achievements are something to be admired – the “Blonde Bomber” preferred his cigars on the mild side. He was first introduced to smoking by team owner Art Rooney, a decision he may have regretted as his star quarterback was notorious for pilfering Rooney’s cigars from his humidor.

Lewis was an intimidating linebacker to say the least; with two Super Bowl rings and over 2,000 career tackles he’ll likely be a unanimous vote in for the Hall of Fame. As a 10-time Pro Bowl selection, it’s no wonder he teamed up with Rocky Patel to make his very own cigar. The Rocky Patel Legends 52 is a full-bodied blend of Nicaraguan and Honduran tobaccos with double binders and a flavorful Ecuadorian Habano wrapper. Steeped with complexity and strength to match, I’d strap my pads on this for premium cigar.

Possibly one of the most beloved and respected personalities in sports, and one of the great football players who smoke cigars – Michael Strahan has shown to be both a character on and off the field. While under-sized, Strahan took the studious approach to his physical playing and went on to become a seven-time Pro Bowl selection and four-time first team All-Pro selection (plus that sweet Super Bowl victory over the Patriots). In his spare time, he’s an avid cigar smoker and has been featured on the cover of Cigar Aficionado. He mostly enjoys Cohiba and Partagas, preferably on the light and sweet side. Strahan says “[Cigars] solicit conversation…You see someone smoking a cigar and you feel instantly closer to them.”

Do I need to spell out why Shula is one of the greatest coaches of all time? I’ll keep it quick: six Super Bowl appearances, two NFL Championships, and the only undefeated season in NFL history. That’s after successful seasons as a player with the Browns and the Colts. It goes without saying that the man has spent a fair amount of his career celebrating, the best way to do some being with a premium victory cigar. Shula’s brand of choice? Cohiba, of course. While I don’t has access to his humidor I think it’s safe to assume he’d go for a dark and smooth Cohiba Nicaragua after one of his famous 3 lb. steaks.

One bad Mother F**ker, Dick Butkus is one of the most feared linebackers of all time. Even now at 75 he could scare most quarterbacks in the pocket. But he doesn’t have time for that anymore; nowadays you’ll find him chomping on cigars and running his several philanthropic organizations. His love affair with CAO cigars is said to have started when his son, Matt, took him to CAO HQ where his fraternity brother just happened to be the son of Tim Ozgener, then-VP of CAO. Since then he’s grown a strong affinity for the company’s Brazilia and Amazon Basin cigars.

He won’t trade you a cigar for a Coke, but he might enjoy one (or both) with you. While the four-time Super Bowl Champion is currently retired, he’s always said that cigars have tamed the beast. Mean Joe’s tastes vary, but he prefers stronger, more robust cigars and it’s been widely reported that La Gloria Cubana cigars are his favorites. “I like to begin my day with a cigar. It’s unbelievable how relaxing this is, how it gets me ready for the day.”

Patriots owner Robert Kraft was seen with a box of Padron 1964 cigars while celebrating his team’s 5th Super Bowl championship. Not a bad way to mark the occasion, eh?

‘Air McNair’ gets a mention for making his mark as the youngest player in NFL history to pass for 20,000 yards and rush for 3,000.  In addition to tearing it up on the field, McNair held a special affinity for cigars off the field: when he won the NFL’s co-MVP title in 2003, his celebration dinner was held at the Vanderbilt Stadium Club in Nashville, complete with dinner, auctions to benefit his Steve McNair Foundation and a cigar bar featuring CAO cigars.

The eccentric former Bengal has recently launched his own brand of cigars called Eighty5 Cigars.

The 2009 Offensive Player of the Year and 3-time Pro Bowl selection made a mark of his own in cigars. While he may have raced a cheetah (and lost) he boasted his potential Super Bowl cigar to be the Puros Indios Chief, an 18 x 66 behemoth.

Iron Mike Ditka for sure. My favorite cigar of all time was the Ditka Throwback, which I believe was the 2014 edition. Wonderful experience.